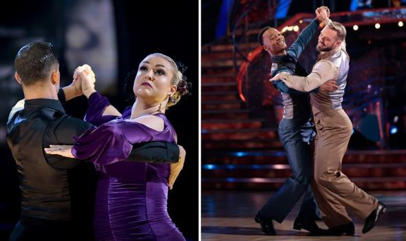 Strictly Come Dancing has returned to British television screens for the iconic show’s 19th series. More than one couple is already the favourite to win, but what were the dancers’ body language like on the dancefloor last night?

Sara Davies scored her highest marks of the series so far last night with 36 points for her Tango with pro partner Alja Skorjanec.

The judges were impressed with the pair’s routine, with Craig Revel Horwood calling it “spectacular”.

However, there were other couples which dazzled, too.

Judi said: “Their routine was beautiful yet again but they seem to have hit a small barrier in terms of where to go next.

“Walking across the moors for no particular reason, we saw John and Johannes suddenly lose the easy-going tactile nature of their relationship to sit on a wall with a large space between them and with their arms firmly folded in a mirrored barrier gesture.

“John seemed to be the more assertive one in front of the camera, doing all the talking to Claudia as though he was the professional, while Johannes looked rather quiet and upset by the judge’s comments.”

The body language expert added: “This is clearly an emotional experience for Johannes, who screamed in sheer delight as John lifted him so beautifully during rehearsals.

“They are such a compelling watch and still produced the best dance of the night for me, with a great narrative, but Craig said they were ‘gappy’ during their close-up dancing and they might need to make a few major decisions about that physicality before next week’s show.” 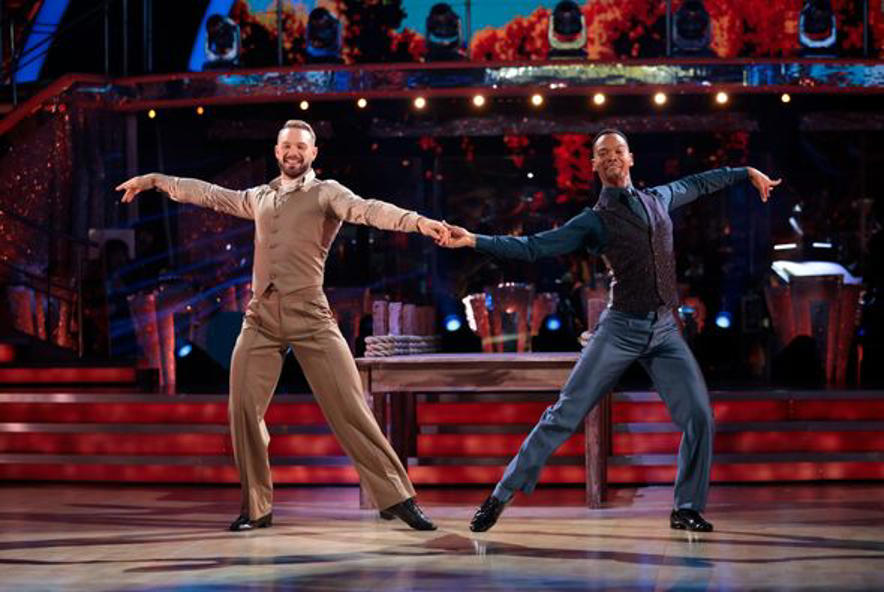 Another less confident pair was Dan and Nadiya due to the couple’s lack of sexual chemistry.

Judi said: “Although Dan dedicated his dance to everyone who has ever suffered from shyness it was clear his inhibitions still need some major culling as his body language signals still lacked all traces of the kind of chemistry and underlying sexuality needed to make his routine easy watching.

“During the rehearsals he looked as though he was interviewing Nadiya politely on the Breakfast Show, suggesting he was trying to physically recreate a scenario that is within his comfort zone.

“We saw him walking along with Nadiya with one hand stuck awkwardly in his pocket and when he took to the stage to talk to the school children he had his hands clasped high up around his chest area in a nervous, self-protective barrier gesture.”

Judi continued: “His comedy acting during his dance routine was poor and he insisted on miming the lyrics to the song throughout the dance, which is a sure sign of nerves.

“MC Hammer might not have been an ideal choice for the very upright and rather rigid-looking Dan, although his Pac Man sideways step across the floor was a technical show-stopper.

“He seems to avoid Nadiya’s eye contact quite a lot and their lack of chemistry does seem to be holding them back. 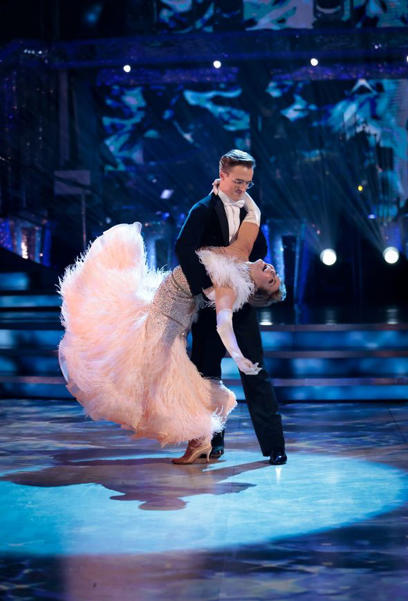 “Being the perfect gentleman is laudable and it saw Bill through to the winner’s spot last year, but Dan does seem to be taking things a little too far and maybe needs to take a deep breath and relax and unwind and just see where the dances and Nadiya’s coaching take him, rather than resisting as he appears to be at the moment.”

Amy and Tom’s routine, however, worked well thanks to their body language, Judi noted.

She said: “This was another couple that appeared to have lost their mojo this week, although thankfully they found it again out there on the dancefloor during a beautiful Foxtrot.

“Amy is the perfect kind, supportive, and encouraging professional who always uses several parental-looking body language gestures like patting and smiling to instill confidence in her partners.

“This week her smile had been replaced by a more worried-looking facial expression as she briefed an equally nervous-looking Tom.

“Instead of patting or stroking him she placed both hands out, fingers splayed and palms facing him in a ‘stop’ gesture as she bared her teeth.

“In reply his bottom lip kept pulling upward and the side of his mouth seemed to twitch in a gesture of uncertainty and anxiety.”

“Both showed signs of relief and Amy patted Tom’s back although her rather pursed smile suggested she’s still got some anxiety about their scores and might think the very talented Tom’s not reached full potential yet.”

Locals Rescued by Boat Amid Surging Floods in Northern Spain

With this, Kockelmann will permanently retain his radio program and KRO-NCRV will lose a prominent half hour of broadcasting time in the morning on NPO Radio 1. In October it ... Read more »

The pop star was declared a national hero during its republican celebrations in her hometown of Bridgetown. Read more »

Spielberg's West Side Story comes to cinemas despite corona lockdown

The new version of classic West Side Story that director Steven Spielberg has made, can be seen in Dutch cinemas from December 9 despite the corona lockdown. Distributor Disney announced ... Read more »

Al Pacino as Aldo Gucci. Photo: Getty Images. The heirs of Aldo Gucci, who ran the world-famous fashion empire from 1953 to 1986, are raving about how the family is ... Read more »

“No one from this production bothered to approach any of the heirs before they put Aldo Gucci in a bad light in the film. In addition, other family members are ... Read more »

Alberta introduces measures for Omicron coronavirus variant despite no cases

Alberta Premier Jason Kenney announced new measures Monday to prevent the spread of the Omicron coronavirus variant in the province despite no confirmed cases in Alberta so far. Read more »

Manson was not home when the police arrived and his door was forced. The officers present had a search warrant with them to allow themselves access to the property. Among ... Read more »

Tonight on TV: Horror at Joe Exotic Zoo, NOOD and You understand that when you are older

Because there is a lot to see on television every day, you can read the viewing tips for tonight here every morning. These are the recommendations for Tuesday 30 November. ... Read more »

The Associated PressMaggie Gyllenhaal poses with the best screenplay award in the winners room at the Gotham Awards at Cipriani Wall Street on Monday, Nov. 29, 2021, in New York. ... Read more »

'She truly was a force of nature': Arlene Dahl, actress in 'One Life to Live,' dies at 96

Arlene Dahl, the actor whose charm and striking red hair shone in such Technicolor movies of the 1950s as “Journey to the Center of the Earth” and “Three Little Words,” ... Read more »

Prosecutors to begin case against Jussie Smollett in Chicago

The Associated PressActor Jussie Smollett walks with family members as they arrive Monday, Nov. 29, 2021, at the Leighton Criminal Courthouse for jury selection at his trial in Chicago. Smollett ... Read more »

Lawyer: Jussie Smollett is innocent, he is a victim himself

The lawsuit against Jussie Smollett, much delayed by the corona virus, has started in Chicago. The Empire actor is accused of six cases of disturbing public order over his false ... Read more »

Manson was not home when the police arrived and his door was forced. The officers present had a search warrant with them to allow themselves access to the property. Among ... Read more »

It’s challenge week on “The Voice.” On Monday, the Top 10 singers were forced to step out of their element and sing a different genre of music than they’re accustomed ... Read more »

FYI: The Dyson Airwrap is on sale for $100 off at Nordstrom Rack right now — but you need to act fast!

Our team is dedicated to finding and telling you more about the products and deals we love. If you love them too and decide to purchase through the links below, ... Read more »

It would only require one or two results this weekend – none of them farfetched – for Notre Dame to reach the College Football Playoff for the third time in ... Read more »

When some folks randomly hear a Kenny G song in a mall or at a waiting room, they’ll go, “Ugh, not him again.” Not so with Kenny G. “When I’m ... Read more »

Bond film director Sir Sam Mendes will be knighted at Windsor Castle on Tuesday alongside a host of famous faces, including stars from the entertainment world, political luminaries and a ... Read more »

Gather round, ye children, because Jill Biden has gifted us with a Christmas miracle. The first lady unveiled her first White House holiday decorations on Monday, and unlike her predecessor ... Read more »

Dr. Kieran Moore, Ontario‘s chief medical officer of health, said Monday that he would ‘not be surprised’ if more cases of a new COVID-19 variant were found in the province. ... Read more »

Video: Is listening to music bad for the environment?

With hundreds of millions of us streaming music every day, listening to music can have a negative impact on the climate. We have spoken to people turning their creative minds towards reducing the impact of the music industry - and helping in the fight against the climate crisis. Read more »

Jim Bob Duggar testified in an evidentiary hearing on Monday, one day before son Josh Duggar's child pornography trial is set to begin. Josh, the eldest of Jim Bob and ... Read more »

Merriam-Webster chooses 'vaccine' as its 2021 word of the year

Merriam-Webster announced on Monday that “vaccine” was its word of the year for 2021. “The biggest science event of the year quickly became the biggest political debate in our country, ... Read more »

Plus, Depop partners with IMG Models and the Black in Fashion Council. These are the stories making headlines in fashion on Thursday. Naomi Osaka joins Victoria’s Secret VS Collective Not ... Read more »

Booker Prize winner Bernardine Evaristo has been appointed as the new president of the Royal Society of Literature. The best-selling author of Girl, Woman, Other will replace Dame Marina Warner ... Read more »

Calgary teacher got away with decades of sexual assaults, lawsuit alleges

Michael Gregory, seen here in a yearbook photo, was a teacher at a Calgary junior high school from 1986 to 2006. Five days after he was charged with sexual offences ... Read more »

Five revelations from TVNZ documentary Scribe: Return of the Crusader

REVIEW: Scribe was on top of the world in the early 2000s. He achieved success as a rapper that paved the way for aspiring hip-hop musicians in Aotearoa. But his ... Read more »

The way parents are informed about racism and discrimination in film and TV classifications will change following new research. The British Board of Film Classification (BBFC), which decides on the ... Read more »

‘Stuff of nightmares.' Rare, terrifying deep-sea fish washes up on a California beach

At first, beachgoer Jay Beiler didn’t know what to make of the bizarre creature he found washed up on Black’s Beach near San Diego, California. “You know, I go to ... Read more »

No lockdown, but a lovedown: this is what you want to know about the All You Need Is Love Christmas Special 2021

How to Use Playing Cards As Tarot Cards

Christmas Number 1: LadBaby and Adele face competition from the church

Lawyer Jussie Smollett: ‘He is the victim'