Former Tottenham Hotspur player Graham Roberts believes that the players are starting to believe in what Nuno Espirito Santo is doing.

After being appointed in the summer, Espirito Santo got to work on assembling his squad and brought Cristian Romero, Pierluigi Gollini, Bryan Gil, Pape Matar Sarr and Emerson Royal to the Tottenham Hotspur stadium.

His new team got off to a brilliant start winning their opening three Premier League matches by a single goal to nil, against Manchester City, Wolverhampton Wanderers and Watford, as well as qualifying for the UEFA Conference League group stages after defeating Pacos Ferreira.

Have you been impressed with Tottenham Hotspur so far this season? 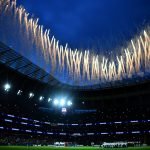 Tottenham then had a blip as they would lose their next three league matches against Crystal Palace, Chelsea and Arsenal but they did return to form prior to the international break as they beat Aston Villa and then upon the return of club football, defeated Newcastle also.

Roberts believes that the players are starting to believe in what Espirito Santo is doing, telling This is Futbol: “Nuno would have been working on the training pitch with the players that he’s got and the quality we have with the international players coming back, then they would just sit in there and it’s easy, it comes easy, and I think the bottom line of it is that they’re starting to believe in what Nuno is doing.”

After finishing seventh last season, you would imagine everybody connected with Tottenham will be hoping that the club can put together a good run of form this season and challenge for a place in the top four.

© Bang Showbiz Freida Pinto reflects on Hollywood diversity Freida Pinto thinks it would have been “easier” for her to be successful if she was starting her career now. The ... Read more »

Karan Johar created a massive buzz when he announced his next directorial as Rocky Aur Rani Ki Prem Kahani. The ace filmmaker will be working on Ranveer Singh and Alia ... Read more »

© Provided by Pinkvilla Jay Bhanushali was one of the contestants of the reality show Bigg Boss 15 and the actor was highly appreciated for his game. He was evicted ... Read more »

© Provided by CNBCTV18 IndiGo airline’s holding company InterGlobe Aviation on Monday scheduled an extraordinary general meeting (EGM) on December 30. Interglobe sent a notice to its shareholders in this ... Read more »

Jake Paul has slammed Tommy Fury as the “biggest b**** in boxing” for pulling out of their scheduled fight just days out from the event. The YouTube star would have ... Read more »

Assam chief minister Himanta Biswa Sarma asked former militants of National Democratic Front of Boroland (NDFB)who returned to the main stream to use the agriculture equipment as their weapons to ... Read more »

In a poll of 2,559 Express readers, 50 percent of voters said they would still go to Christmas parties despite fears around the Omicron spread, whilst 46 percent said they ... Read more »

Efforts are on to revive the pandemic-hit economy of the state and create jobs by bringing investments here, Jharkhand Chief Minister Hemant Soren said on Monday while inaugurating four textile ... Read more »

Environmental campaigners have condemned Britain’s biggest holiday company for flying an almost empty plane over 2,750 miles on a round-trip from Birmingham to Finnish Lapland. © Tui UK Dashing to ... Read more »

Families could miss out on thousands via unclaimed inheritance - are you due windfall?

A huge 7,090 estates remain unclaimed, figures obtained from the UK Government’s treasury solicitor shows. The median amount of inheritance received by individuals is £11,000, data from the Office for ... Read more »

FILE – In this July 24, 2021, file photo former President Donald Trump smiles as he pauses while speaking to supporters at a Turning Point Action gathering in Phoenix. Trump’s ... Read more »

I'm A Celebrity viewers convinced campmates are breaking the rules by wearing make-up – but did you spot it?

I'M a Celebrity viewers are convinced some of the campmates are breaking the rules – by wearing make-up. Fans have flocked to Twitter to share their thoughts, with Frankie Bridge ... Read more »

Pension provider Scottish Widows has said women need to nearly double how much they save for later life every month to bridge the ludicrous savings gap. The report found women ... Read more »

School officials could be charged in deadly Michigan shooting: prosecutor

Michigan school officials could still be charged for ignoring multiple red flags ahead of the deadly mass shooting at Oxford High School, the local prosecutor warned in a new interview. ... Read more »

The Supreme Court Monday pulled up the Railways for not acting against encroachers on its land in Gujarat, where a railway line is scheduled to come up, and said they ... Read more »

'Stealing a living', 'On fraud watch' - Many Leeds fans blast star who's 'not good enough'

Many Leeds United fans have slammed Jack Harrison for the role he played in the club’s recent 2-2 draw with Brentford. © Provided by This is Futbol Jack Harrison After ... Read more »

The Washington Capitals have lost a third player, as Garnet Hathaway finds himself in the league’s COVID protocol. The 30-year-old forward is expected to be unavailable for Monday night’s game ... Read more »

(Reuters) – Manchester City midfielder Kevin De Bruyne will start in Tuesday’s Champions League game at RB Leipzig as he works his way back from a bout of COVID-19 but ... Read more »

After losing their chance to hoist the Grey Cup, the Toronto Argos had insult added to their injury via a mouthful of beer being spit in their face. A Hamilton ... Read more »

Amid rising cases of Omicron, UP government issues new guideline

© Provided by DNA Amid new cases of the Omicron variant of coronavirus, the Uttar Pradesh government has issued a new guideline to all the districts to take precautions and ... Read more »

Photograph: AP People of Moorsele say Marie Cornillie preferred her dog to her tenants and would often urinate in the street Cities around the world have been inspired by the ... Read more »

Illustration shows representation of cryptocurrency Bitcoin By Medha Singh and Lisa Pauline Mattackal (Reuters) – A flash weekend bitcoin crash that wiped out a fifth of its value and caused ... Read more »

A customer can be seen being beaten up by a bouncer at club in Torquay, DevonIn a clip he appeared to be repeatedly kicked and punched in the smoking area A bystander tried to interject but the security worker continued the brawling  Read more »

Is this FRUIT the trick for weight loss? Traditional Chinese medicine expert goes viral with alternative natural treatments - from a dried berry that makes you lose weight to a pill that 'gets everyone pregnant'

Eastern Philosophy has gained attention online for videos of their various products to TikTokThey sell all-natural medicines that are said to treat acne, aging, weight loss, hair growth, hangovers, menstrual cramps - and even infertilityOne of their products, hawthorn berry, is described as a 'superfood for weight loss in traditional Chinese medicine'  They claim another item, He Shou Wu, helps withhair growth The company also claims that Baifeng Wen - which was made to treat menstrual cramps - is 'getting everyone pregnant' Other products that they sell include an oil used to treat muscle and joint pain and an herb that allegedly reduces aging at a cellular level Read more »