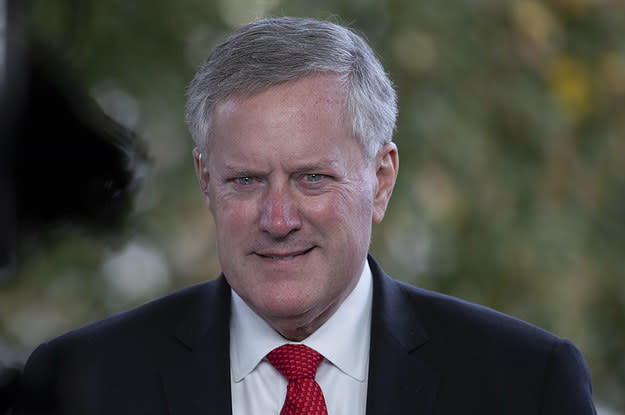 Donald Trump’s former chief of staff Mark Meadows told a member of Congress he loved the idea of appointing alternate electors as part of a “direct and collateral attack” three days after the Nov. 3 presidential election, according to documents he submitted to the committee investigating the attack on the Capitol.

The committee revealed the information in a letter to Meadows’ lawyers informing them of their intent to move forward with contempt proceedings. The three-page letter gives further insight into Meadows’ involvement in the events related to Jan. 6, including a text message exchange between Meadows and a member of Congress about appointing alternate electors in which Meadows said, “I love it”; a text message exchange between him and an organizer of the Jan. 6 rally where Trump calls on the crowd to go to the Capitol; and a Jan. 5 email about having the National Guard on standby.

The letter does not give the name of the member of Congress with whom Meadows had the exchange but notes that the undisclosed member acknowledged that appointing alternate electors in certain states would be “highly controversial.”

Hours after the committee's letter was released, Meadows filed a lawsuit against House Speaker Nancy Pelosi and the eight members of the committee claiming the subpoenas compelling him to cooperate fully are overreaching and illegal. Meadows' attorneys argue the subpoenas violate executive privilege and lack legislative power in an attempt to delegitimize the congressional committee.

Meadows was able to stave off contempt proceedings last week after he struck a deal with the committee to produce records and appear for a deposition. But Meadows reversed course shortly after, with his lawyers claiming the information the committee sought from a third-party communication provider included “intensely personal communications,” according to a letter first published by Politico.

The abrupt change came immediately after Trump claimed details in Meadows’ newly released book The Chief’s Chief that alleged the former president had COVID-19 during the first debate with now-president Biden were “fake news.” Meadows details in the book that the president tested positive three days before and received a negative test a short time after.

Meadows could be the third Trump ally to be slapped with criminal contempt charges for defiantly refusing to cooperate with the committee’s investigation. Ex-Justice Department official Jeffrey Clark asserted his Fifth Amendment rights after first claiming conversations between him and Trump were protected by attorney-client privilege. Trump’s former adviser Steve Bannon said Trump’s lawyers directed him to claim executive privilege over communications leading up to and during the insurrection. Trump also sought to use executive privilege to block the National Archives from turning over information to the committee.

The Jan. 6 committee has repeatedly pushed back against the claims of executive privilege, and the conundrum is also on trial in the DC court of appeals as Trump’s lawyers said they would petition the Supreme Court to take on the case if they lose again.

Bannon will stand trial in July 2022 on contempt charges. The House of Representatives will likely vote to move forward with contempt charges against Clark, who is known to have supported Trump’s efforts in trying to overturn the election.

Alexandra Breckenridge is best known for starring as Melinda Monroe in beloved drama series, Virgin River – but the actress has been a recognisable face on TV for a number ... Read more »

Malik McDowell’s big chance with the Cleveland Browns has almost certainly ended. The defensive tackle with a long history of off-field trouble is highly unlikely to be retained as an ... Read more »

MILWAUKEE (AP) — The Milwaukee Brewers have promoted Jim Henderson to take over as bullpen coach for the departing Steve Karsay. In other moves, the Brewers moved Matt Erickson to ... Read more »

MONTREAL (AP) — The Montreal Canadiens hired player agent Kent Hughes as their general manager Tuesday, hoping he can turn around a team with the worst record in the NHL. ... Read more »

Olympia Ohanian, daughter of 23-time Grand Slam singles champion Serena Williams, is at it again, flexing on social media with her killer tennis moves. The 4-year-old, who has 630,000 Instagram ... Read more »

Judicial Inspectorate for Correctional Services says this is a violation of the Constitution. © Copyright (c) Daily Maverick , All Rights Reserved Inmates in solitary confinement in some South African ... Read more »

Senate Majority Leader Chuck Schumer and other Senate Democrats have reportedly started looking for ways to get rid of the filibuster. Drew Angerer/Getty Images Senate Democrats are still hunting for ... Read more »

An unvaccinated COVID-19 patient who was being kept alive on a ventilator has been transferred from Minnesota to Texas after his wife obtained a restraining order barring his doctors from ... Read more »

MAMA June’s daughter Honey Boo Boo looked unrecognizable with NO makeup as she ditched her massive fake lashes. The 16-year-old shared a new selfie on her Instagram Story on Monday. ... Read more »

MICROSOFT is continuing in its mission to make Xbox the best place to play by snapping up Activision Blizzard in a $68.7 billion deal. Announced in a blog post, Microsoft ... Read more »

WE'RE all guilty of asking a silly question from time to time. But a former Ryanair flight attendant has revealed the most stupid question she was asked during a journey ... Read more »

UK Prime Minister Boris Johnson on Tuesday “categorically” denied claims by his former chief aide that he lied to parliament about a Downing Street party held during a strict lockdown. ... Read more »

What is the Brat diet? Here's which foods to eat and when you may need it

© Provided by Woman&Home Banana on toast as part of the Brat diet plan The Brat diet has long been recommended to help those experiencing tummy issues and works by ... Read more »

One of the suspects in the racist murder of Stephen Lawrence has complained he cannot be moved to an open prison after failing to pay £90,000 he made from a ... Read more »

Kyle Lowry’s mother, Marie Holloway has become a staple in the Toronto Raptors’ Twitter community. With nearly 10,000 followers, Holloway, known as @BlessedMom07 on Twitter, is a fan favorite regardless ... Read more »

© Provided by Financial Post A pedestrian checks the hours of a magazine store in Montreal which was closed on Sunday because of restrictions aimed at curbing coronavirus hospitalizations. Small ... Read more »

Expert choice We all covet those little rectangles in our pockets. Smartphones play a massive part in our day-to-day lives, but buying the perfect smartphone can be an arduous task. ... Read more »

BlackRock's Larry Fink says the next 1,000 unicorns will be sustainable companies that make energy affordable — not more search engines or social-media titans