Protesters came together around 1pm on Saturday art Haymarket before marching down the city centre to the surprise of crowds of shoppers on Northumberland Street. Around 300 people demonstrated against Covidvaccine passports and jab offers for children aged 12 to 15. Footage from Newcastle shows the protesters walking down the street, holding their placards up and shouting “freedom”.

The demonstrators argued they have the right to choose whether to be inoculated or not despite scientific evidence showing a reduced risk of contracting the coronavirus and the reduced risk of death.

Private venues however have the right to request proof of vaccination but the use of the pass is not currently mandatory. 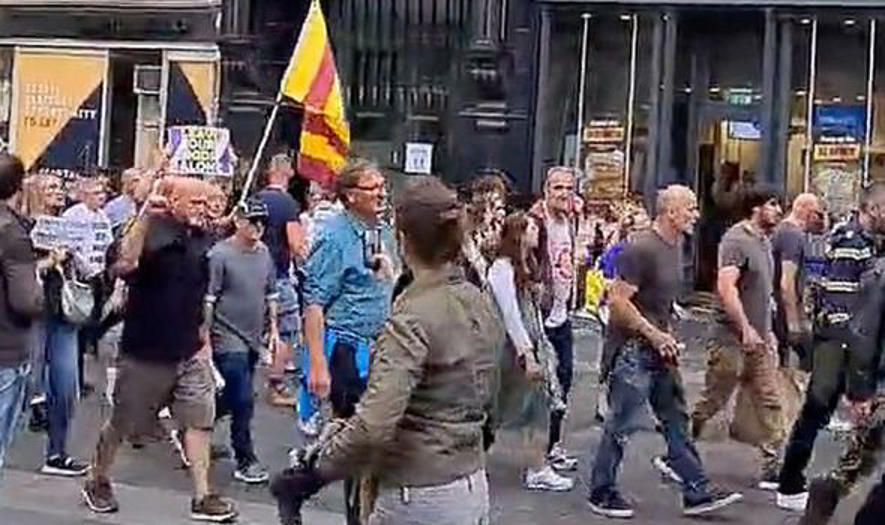 Some of the protesters also expressed concerns about their children being jabbed.

As of this month, young Britons aged 16 and 17 are able to book the first dose of the coronavirus vaccine while children 12 to 15 will be instead offered the jab.

This week ministers have faced calls to publish the evidence they have to support mandatory Covid vaccine passports, as they remain resolute the Government will keep the scheme “in reserve”. 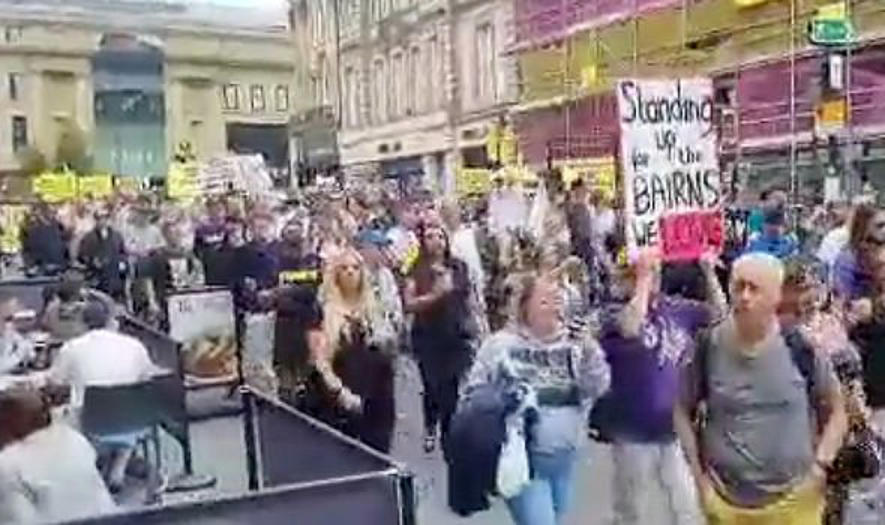 At Cabinet Office questions, Liberal Democrat MP Alistair Carmichael asked: “The Government has had no fewer than 13 different positions in relation to vaccine passports: it said yes three times, no four, and maybe or we’re having a review six.”

In a question to Cabinet Office minister Nigel Adams, Mr Carmichael asked: “Rather than just asserting that the evidence is there, will he commit to publishing it? If he is ever going to take his own backbenchers with him, let alone the general public, the case will have to be made and they haven’t made it yet.

“Incidentally are we going to get a vote before they are introduced?” 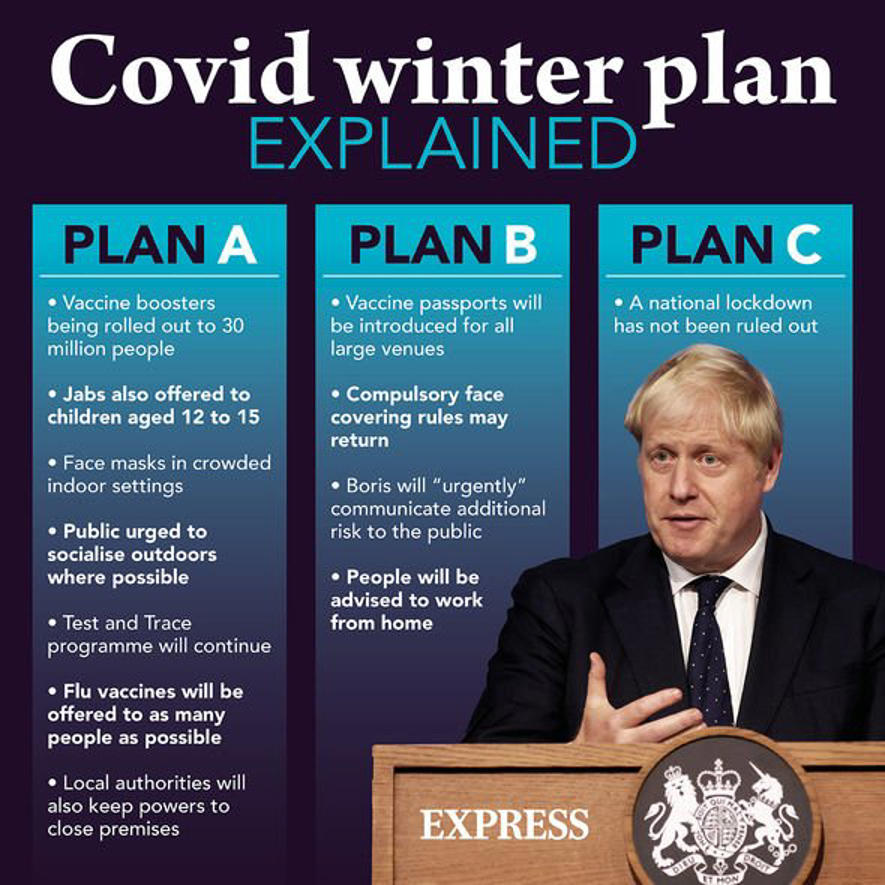 Mr Adams replied: “We have published brief summaries of the evidence in the autumn and winter plan. That is publicly available on gov.uk.

“We are keeping vaccine certification in reserve in case it is required, again, as I have said previously, to help prevent pressure on the NHS. We do hope that it will be unnecessary but the responsible thing is to prepare for all eventualities.”

More than 78 million vaccinations have been delivered, meaning nearly nine in 10 adults have had their first dose, but Prof Van-Tam used a train metaphor to illustrate why the pandemic is not over yet.

Coronavirus still poses a “considerable hazard” to the UK over the coming months, according to England’s deputy chief medical officer Professor Jonathan Van-Tam

Speaking to the Guardian, Prof Van-Tam used his signature metaphors to explain why people should not consider the pandemic over despite the success of the vaccine rollout.

Prof Van-Tam, 57, also urged the public to listen to scientists for medical advice rather than celebrities.

A California travel blogger was one of 2 tourists killed after getting caught in gang crossfire in Tulum, Mexico

'Will remember the sacrifice': Amit Shah meets kin of cop shot dead by militants, promises job to his wife

© GETTY Christmas Dinner One of Britain’s largest sprout producers told the Daily Express that shoppers would “certainly face a larger shopping bill than they would have expected” in December. ... Read more »

Hundreds of drink and injection spiking incidents have been reported to police forces across the UK over the past two months. © PA Archive Police Stock The National Police Chiefs’ ... Read more »

History matters. As we debate statues and slavery and dispute the role of empire, we have become accustomed to constant sparring over the past. But there is one branch of ... Read more »

LIVE – Updated at 06:32 © Photograph: Alana Holmberg/Oculi for The Guardian Friends and coworkers enjoy an outdoor lunch at a restaurant in Fitzroy as Melbourne emerges from its sixth ... Read more »

Arjun Kapoor wishes Malaika Arora on 48th birthday, says all I want is to make you smile

Alec Baldwin was 'handed loaded weapon and told it was safe'

© Bang Showbiz Alec Baldwin Alec Baldwin was handed a loaded weapon and told it was safe to use on the set of ‘Rust’. The 63-year-old actor accidentally shot and ... Read more »

© Provided by Zee News New Delhi: The Internet has got no chills, literally, no chills at all! Recently, Shahid Kapoor returned from his Maldives trip along with his wife ... Read more »

‘We need him to deliver': Biden faces wrath of disappointed supporters

When Joe Biden huddled with a group of historians in March, the conversation revolved around thinking big like one of his predecessors, Franklin Roosevelt, architect of the New Deal. Biden, ... Read more »

A Minneapolis police officer who killed an innocent driver during a July pursuit has been criminally charged, prosecutors said Friday. © Provided by NBC News Officer Brian Cummings, 37, was ... Read more »

Eva Longoria claims being "bossy by nature" is an asset

© Bang Showbiz Eva Longoria Eva Longoria says being “bossy by nature” makes her transition into directing movies easier. The ‘Desperate Housewives’ actor, 46, gave an insight about what it ... Read more »

© Provided by Independent Online (IOL) Imagine walking with your partner to your favourite secluded beach, hands linked together, laughing at sweet nothings and stealing glances at each other. Less ... Read more »

Cheers to that: Five sustainable spirit brands for guilt-free drinking

© Provided by The Independent Amid the forest fires, flash floods, and global climate crisis talks that 2021 has brought us, it’s no surprise that many of us are worried ... Read more »

© Provided by Dezeen Upside-down skyscraper by David Adjaye This week on Dezeen, Adjaye Associates proposed a supertall skyscraper in New York that has a series of cantilevers to give it a dramatic, inverted appearance. Adjaye Associates, which ... Read more »

West Indies, the defending champions, were still waiting on all-rounder Andre Russell’s fitness a day before their T20 World Cup opener against England in Dubai on Saturday. Russell has been ... Read more »

© Provided by Zee News New Delhi: The Delhi Police on Saturday (October 23, 2021) issued a traffic advisory and advised Delhiites to avoid the Mathura Road from Ashram to ... Read more »

Local public health chiefs in England are breaking from the government’s official guidance and recommending so-called plan B protective measures to combat a surge in coronavirus cases. © Provided by ... Read more »

Happy Karwa Chauth 2021: You can gift THESE tech gadgets to your spouse

© Provided by Zee News New Delhi: Karwa Chauth 2021 is only a few months away. It is an age-old Hindu practice in which married Hindu women fast and pray ... Read more »

© Provided by Zee News New Delhi: The Bharat Electronics Limited (BEL) has issued a notification for the recruitment of Trainee Engineer and Project Engineer posts. BEL is going to ... Read more »

Want to learn English? THIS new Google Search feature will help you; here's how

© Provided by Zee News New Delhi: Google had a Pixel launch event earlier this week, during which it unveiled the Pixel 6 range of smartphones. The company then made ... Read more »

Garena Free Fire: Exclusive First Look Of Diwali Items in Free Fire And How To Get Them

Ex-council house had ten offers from people who have never seen it - and 100 people wanting to visit, within 48 hours of going on sale

Homebuyers are fighting over this ex-council house in Burnage – highlighting how Manchester’s crazy property market shows no signs of slowing down just yet. Despite the stamp duty holiday being ... Read more »

American Express is to increase the interest rates it charges UK consumers’ credit cards from February. © Provided by The Guardian Photograph: Dado Ruvić/Reuters The company said the increase in ... Read more »

© Provided by News18 Cryptocurrency Update: 6 Crypto Coins Gain Up to 6,39,521.45%. Check Prices Here The cryptocurrency market on Saturday, October 23, was back in the red zone with ... Read more »

Motorists are being advised to shop around for fuel before filling up this weekend as the soaring cost of car ownership heaps fresh pain on squeezed household finances. © Provided ... Read more »

Blackpool’s world famous Illuminations have been lighting up the seaside town’s promenade during wintertime since 1879. And while Richard Williams doesn’t go back quite that far, he has been working ... Read more »

What channel is USC vs. Notre Dame on today? Time, TV schedule for Week 8 rivalry game

The Jeweled Shillelagh — or the annual battle for it, at least — has lost its sheen in 2021. On one side of the rivalry you have USC, which has ... Read more »

Knowing your cuisine: Importance of whole spices in Indian food

Digital transformation will lead to a cleaner future

© Motivate Publishing Digital-Transformation-768×477 For countries like Saudi Arabia and its fellow GCC members, addressing climate change has become an integral part of their economic development and diversification strategies. This ... Read more »

PUBG New State to release on iOS, Android on THIS date - Here's all you need to know about Krafton's battle royale game

Great Gifting Ideas For Your Husband This Karwa Chauth

Want to download files from Google Docs for offline use or sharing? Here's how you can do it

Huge bungalow for sale with an outdoor cinema and lake across 2.9 acres