Health Secretary Sajid Javid has announced changes to GP services as we reach the tail end of the coronavirus pandemic. The overhaul will focus on getting more patients in to see their GP face-to-face should they wish, and rewarding practices with financial incentives if they revert back to pre-pandemic practices.

As part of the plans, patients will be able to rate their GP practice’s performance via text message.

Practices that fail to provide an appropriate level of “access” will be named and shamed in league tables, as part of a move to encourage more face-to-face appointments. 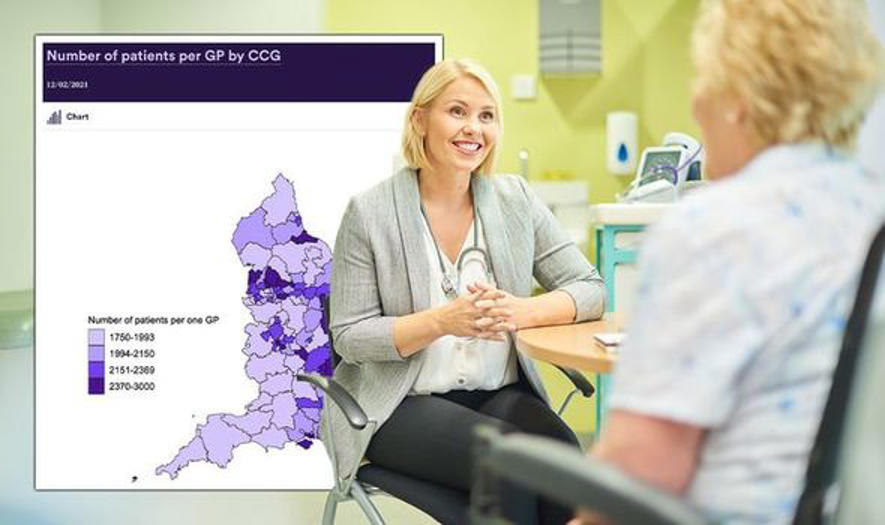 © NUFFIELD HEALTH/GETTY GP map, a GP and mountain of paperwork

The overhaul has been met with disdain from doctors who say the Government originally instructed them to move as many appointments online as possible and stirring up anti-GP rhetoric.

But one key pledge of the Tory’s 2019 manifesto was for 6,000 more GPs to be deployed across Britain. 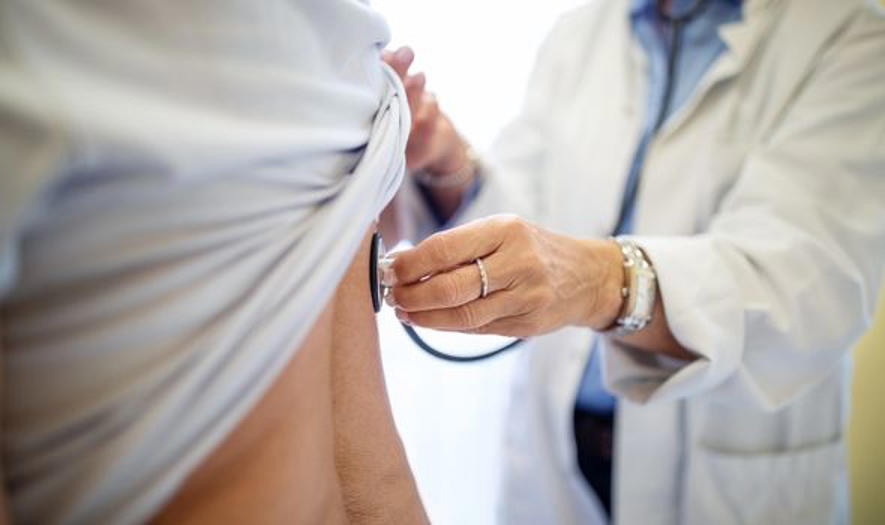 The Royal College of GPs (RCGP) has called on the Government to fulfil its manifesto pledge of an additional 6,000 GPs and 26,000 other primary care professionals in the workforce by 2024 – a target that is likely to be missed.

GPs are usually the first port of call when a medical issue arises, and patients have reported accessing care throughout the pandemic has been somewhat thwarted by the loss of most face-to-face appointments, which was necessary to curb the spread of COVID-19.

But the number of doctors per person throughout England varies dramatically, with some areas having more and others having significantly less, according to data compiled by Nuffield Trust. 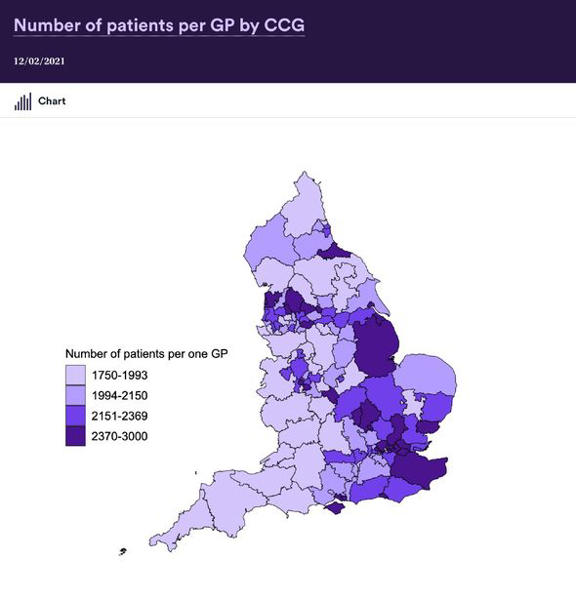 © NUFFIELD HEALTH Map showing the number of people per GP

How many GPs are there in the UK?

But this was not the case. There were 174 fewer permanent, qualified GPs than in December 2019, as well as 165 fewer locums. 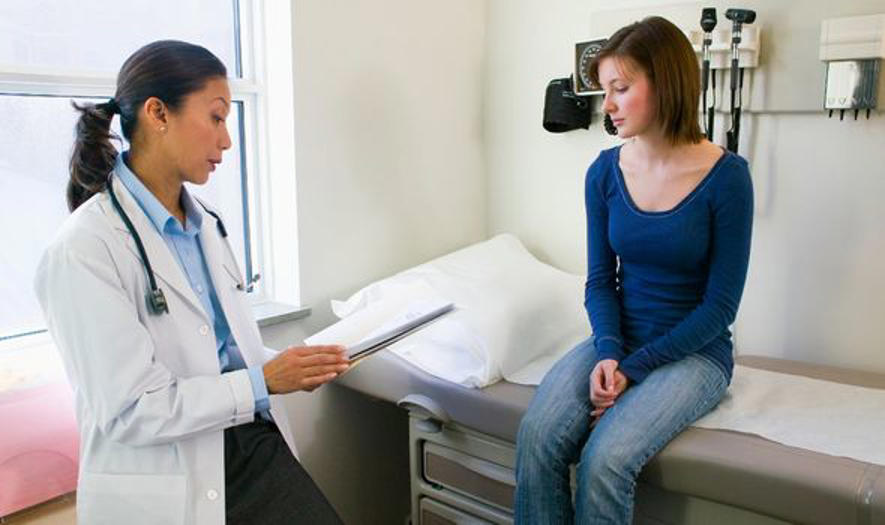 The number of people per GP also varies wildly across the country, with the more densely populated areas tending to have less.

In London, NHS South West London has 1,995 people per GP, whereas NHS North Central London has 2,406 patients per practitioner.

However, some rural areas also have a comparatively low number of GPs to the general population.

Lincolnshire has 2,448 people to each GP in the area, whereas neighbouring East Leicestershire has 1,842 people per doctor.

Some densely populated cities also have a lower number of people per GP, such as Liverpool, which has 1,775 people per doctor.

How much does a GP earn?

In comparison to other types of doctors, such as consultants, they earn less – as a consultant’s salary can be as high as £114,000 per year.

The positional change Man Utd would be ‘stupid' not to try

'I love you forever': Passenger pleads guilty in hit-and-run death of Calgary officer

© Provided by The Canadian Press CALGARY — The wife of a Calgary police officer killed in a hit and run says she lost her love and best friend at ... Read more »

THE world's loneliest house stuck on the side of a remote mountain range had lain empty for 100 years – but its mystery remains. Situated nearly 9,000ft above sea level ... Read more »

Ed Sheeran reveals he struggles being apart from daughter Lyra

© Provided by Daily Mail MailOnline logo Ed Sheeran has revealed he finds being away from his daughter Lyra ‘really difficult’ and she has given him ‘purpose’ outside of his ... Read more »

Mark Wright has had a huge 12cm tumour removed from his armpit following a terrifying cancer scare. The TOWIE star, 34, took to Instagram to share his story. Sharing a ... Read more »

(Getty Images) A new study has found that thousands of infants are being wrongly diagnosed with an allergy to cow’s milk. Of the estimated 1,300 babies analysed in the study, ... Read more »

© Provided by The Times of India NEW DELHI: The lone survivor among the 14 on board the Mi-17 V5 chopper that crashed on Wednesday, Group Captain Varun Singh has ... Read more »

© Provided by Hindustan Times To counter the Congress, the BJP will try to highlight its achievement in the last four years. It is expected that the winter session of ... Read more »

A MUM has shared how she was left “humiliated” after she was asked to leave a bar at an old fashioned working men's club because she is a woman. Julie ... Read more »

I have a full beard but I refuse to shave it off, it's part of me and I even straighten it

A WOMAN has proudly showcased her full beard and the self care that she puts into it, revealing that she refuses to shave it off. TikTok user PeekabooPumpkin regularly shares ... Read more »

By Stephen Nellis © Reuters/Stephen Lam FILE PHOTO: The Apple logo is displayed at company headquarters in California (Reuters) -Apple Inc on Wednesday won a reprieve from having to make ... Read more »

Yukon reports two Omicron cases, expands booster program to those aged 18 and over

WHITEHORSE — Two cases of the Omicron variant of COVID-19 have been found in Yukon as the territory moves to expand its booster program to those aged 18 and over, ... Read more »

A FREQUENT flyer has shared why passengers should always take a picture of their luggage before they get on a plane. This tip could save you some hassle further down ... Read more »

SNOOCHIE Shy has revealed the I’m A Celebrity crew help campmates clean out the dunny. The task is one of the show’s most hated chores but the Radio 1 Xtra ... Read more »

Airline pilot Patrick Smith told Sun Online Travel that phones in checked-in luggage pose an even bigger problem to flight safety. Shutterstock There are a number of ways to make ... Read more »

Former President Donald Trump gave a wide-ranging interview to conservative broadcaster Hugh Hewitt this week in which he once again teased the potential of a second bid for the White ... Read more »

A line of people waiting to drop off mail-in ballots in Phoenix, Arizona on October 16, 2020. A new poll found Hispanic voters split between voting for Democrats and Republican ... Read more »

© Provided by The Times of India NEW DELHI: Top leaders of the country including President Ram Nath Kovind, Prime Minister Narendra Modi and others expressed anguish over the sudden ... Read more »

A talented runner who dreams of winning gold for Team GB is facing possible deportation back to Ethiopia after his claim for asylum was rejected by the Home Office. © ... Read more »

Hillary Clinton shared an excerpt of her planned 2016 White House victory speech on “Today” on Dec. 8, 2021. NBC Hillary Clinton is pulling back the curtain five years after ... Read more »

© Thomas Holder/EWN FILE: NDPP Shamila Batohi at the Union Buildings in Pretoria on 4 December 2018. CAPE TOWN – MPs said they have run out of patience with National ... Read more »

© Nick Cannon Nick Cannon is sharing a photo of his late son. On Wednesday’s episode of his eponymous talk show, the 41-year-old host showed viewers a photo he took of his ... Read more »

© Provided by Hindustan Times Jammu and Kashmir reported 151 fresh Covid cases on Wednesday. Srinagar district has the highest number of active cases at 538 followed by Baramulla and ... Read more »

Mehbooba Mufti meets Kashmiri Pandits in New Delhi; tells them your exodus has hurt us too

© Provided by Hindustan Times While addressing a gathering of members of the Kashmiri Pandit community in the national capital on Wednesday, Mehbooba Mufti said Kashmir was incomplete without them. ... Read more »

Heisman Trophy finalist Kenny Pickett is “undecided” if he will play in the Peach Bowl after the departure of Pittsburgh offensive coordinator Mark Whipple, he told The Dan Patrick Show on Wednesday. In ... Read more »

KYIV, Ukraine (AP) — The editor of a popular Belarusian media outlet was arrested Wednesday following a raid of his apartment, the latest target in a sweeping crackdown on independent ... Read more »

A Black man convicted of aggravated assault by an all-white jury that deliberated in a room featuring Confederate symbols and memorabilia will get a new trial, a Tennessee appeals court ... Read more »

There is mixed reaction about President Biden‘s decision for a diplomatic boycott of the upcoming Winter Olympic Games in China. News 5 got some perspective from a formal Olympian who ... Read more »

Dyer: The Chip Shortage Is Totally Out of Control

Previous govt looted people in the name of development: CM Yogi in Mathura

Russia says it has 'right to defend its security,' as Biden warns of sanctions

How to power up PokéStops in Pokémon Go

Boris Johnson's plan B arrives – but how much is it now undermined?

How fake internet lovers are scamming desperate singles out of millions

The ten closest finishes from the 2021 NASCAR season

Mood mutinous among MPs and ministers over Covid plan B measures