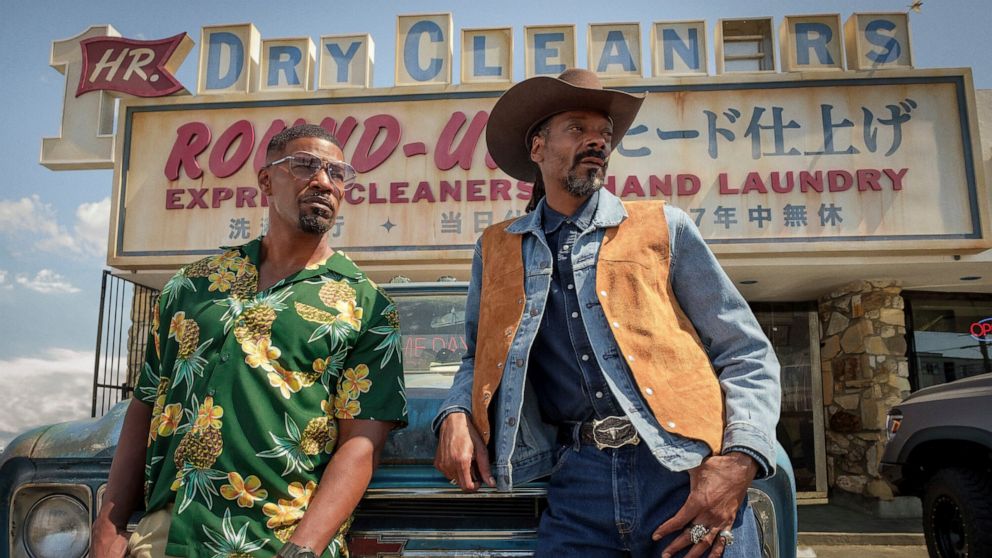 This image released by Netflix shows Jamie Foxx, left, and Snoop Dogg in a scene from “Day Shift.” (Andrew Cooper/Netflix via AP) The Associated Press

This year marks the centennial anniversary of F. W. Murnau's “Nosferatu,” a long time for us humans but only a blip for vampires.

If you were looking to celebrate the birthday of that silent classic, which still casts a long and ominous shadow over all vampires films that have followed, you could do it with what's perhaps its exact opposite: the new Netflix action-comedy “Day Shift,” with Jamie Foxx as a San Fernando Valley vampire hunter.

“Day Shift,” which begins streaming Friday, has aims much closer to something like “Zombieland” than Murnau. Foxx plays Bud Jablonski, a working-class Los Angeles man and divorced father who cleans pools as a cover for his real job of hunting vampires. They seem to be especially populous in the San Fernando Valley, which may not be surprising to Californians but is about as far a departure you can get from the aristocratic, European origins of the genre. Plus, “What We Do in the Shadows” already has Staten Island covered.

“Day Shift” isn't much interested in vampires, anyway. They're mostly videogame-like cannon fodder for Bud, a veteran hunter who's quite good at killing them but significantly worse at hiding his real occupation. He's living on his own after his wife (Meagan Good), suspicious of his excuses, kicked him out. Now, she's ready to move, with their 10-year-old daughter (Zion Broadnax), far away from Los Angeles unless Bud can come up with $10,000 in a week for school tuition and braces.

“Day Shift,” the directorial debut of former stuntman J.J. Perry and written by Tyler Tice and “Army of the Dead” scribe Shay Hatten, has placed a familiar tale — a down-and-out single father trying to prove his worth — into a vampire movie. There's also a labor commentary somewhere in here with Bud, kicked out of the vampire hunter union, trying to get back in to secure higher rates for his kills.

But the union subplot is less to drive home a free-market point than to supply Bud a buddy-comedy partner. After another hunter, Big John (Snoop Dogg), helps Bud get back into the union, a union rep (Dave Franco) is assigned to monitor and ride along with Bud. As a suit-wearing, regulations sidekick terrified of vampires but thoroughly knowledgeable about them, Franco is a fine foil to Foxx.

There's a this-is-barely-a-story feel to “Day Shift,” but not always unpleasantly so. The family plotline is as basic as it gets. The buddy comedy set-up — complete with banter about the “Twilight” saga — is likewise standard boilerplate. “Day Shift” might slot in somewhere around an OK “Buffy the Vampire Slayer” episode.

Yet the slapdash vibe of “Day Shift” has its charms. It's built almost perfectly to be the kind of thing you might, after some scrolling, absentmindedly click to watch on Netflix and end of watching for its sheer watchability. That's due largely to Foxx, whose comic timing remains sharp, and supporting players like Snoop and Peter Stormare who breeze in, as if purely for fun. Thinly sketched as it is, “Day Shift” has a retro vibe. Not, like, “Nosferatu”-retro, but more 1980s. Want to see Jamie Foxx shoot some vampires? Well, you're in luck.

“Day Shift” a Focus Features release, is rated R by the Motion Picture Association of America for strong violence and gore, and language. Running time: 114 minutes. Two and half stars out of four.

AAPI and the problems of categorizing race

Both drivers said they feared for their lives when the road-rage incident happened. Read more »

Nick Bosa #97 of the San Francisco 49ers reacts after sacking Geno Smith #7 of the Seattle Seahawks during the fourth quarter at Levi’s Stadium on Sept. 18, 2022 in ... Read more »

It’s gourd-geous. A 2,554-pound pumpkin in near Buffalo, N.Y., has broken the U.S. record for heaviest pumpkin. The previous record was 2,528 pounds and the previous New York state record ... Read more »

The Apple Watch SE has long served as a solid option for those who want the basis of what the Apple Watch can offer, for as little as possible. Sure, ... Read more »

Alberta’s provincial court is getting a new name. The provincial government says the court will be renamed the Alberta Court of Justice to better represent its responsibilities. The change comes ... Read more »

LOS GATOS, CALIFORNIA – SEPTEMBER 28: Philippe Leroy, head chef and owner of Chez Philippe, poses for a photograph in a dining room of his restaurant in downtown Los Gatos, ... Read more »

ARLINGTON —  Gleyber Torres was a late scratch from the Yankees’ lineup on Monday as they began a four-game series over the next three days. Torres was in the original ... Read more »

The new school year has only just begun, and already some students in the Central Okanagan are left wondering how they’ll get to class starting Wednesday morning. “I don’t have ... Read more »

Link video: http://nbclim-download.edgesuite.net/Prod/NBCU_LM_VMS_-_KXAS/210/838/Beto_College_Tour_6P__103238.mp4 NBCUniversal, Inc. Days after the only gubernatorial debate in Edinburg in the Rio Grande Valley, the candidates for Texas governor were on the road trying to get ... Read more »

Photographer rides out Ian to capture the storm for others Chuck Larsen has lived on Sanibel Island for 12 years, and until last week had never experienced a major hurricane ... Read more »

The worsening effects of climate change are compounding the historical loss of British Columbia’s old-growth forests, says the co-author of a new paper that shows decades of logging on the ... Read more »

Pasadena police said they're searching for a person of interest in connection with the woman's death. Read more »

The head of the Democratic Congressional Campaign Committee used more than $7,000 in taxpayer and donor funds to employ his husband’s personal trainer — leading to calls for an ethics ... Read more »

President Biden told an audience in Puerto Rico Monday that “I was sort of raised in the Puerto Rican community at home, politically” — despite the fact that only about ... Read more »

Darrell Brooks covers his face during jury selection. AP The man accused of fatally mowing down six parade-goers during the Waukesha Christmas parade in Wisconsin last year was tossed from ... Read more »

Characters Who Deserve Their Own Dragon Ball Super Movie

Bandai Namco Entertainment “Goku who?” Thanks to “Dragon Ball Super: Super Hero,” the world now knows that a “Dragon Ball” movie can star a character outside of Goku’s family tree ... Read more »

A Canadian polling expert is raising concerns about the results of the Statistics Canada language census after the order of two questions was swapped on the national questionnaire last year. ... Read more »

Trump files $475 million defamation lawsuit against CNN Former President Donald Trump has gone to court against CNN, a familiar target when he was president A man holds up his ... Read more »

© Denny Medley-USA TODAY Sports On Sunday, the Buffalo Bills scored a big win over one of the top contenders in the AFC, the Baltimore Ravens. Unfortunately, it came at ... Read more »

LONDON – Chancellor of the Exchequer Kwasi Kwarteng is due to bring forward the announcement of his medium-term fiscal plan as he seeks to reassure financial markets about his economic ... Read more »

Naver will acquire Poshmark for $17.90 per share in an all-cash deal that will value the online retailer at roughly $1.2 billion, the companies said Monday. Poshmark shares popped in ... Read more »

Baker Mayfield Panthers No one would blame Carolina Panthers head coach Matt Rhule if he decided to bench starting quarterback Baker Mayfield in an attempt to kickstart the team’s offense. ... Read more »

All options on table as Giants remain unsure about quarterbacks’ health

Instead of coaching the Giants, Brian Daboll could be a contestant on “Let’s Make a Deal,” trying to determine if his starting quarterback is behind Door No. 1, Door No. ... Read more »

Giants to sign A.J. Klein The Giants are signing free agent linebacker A.J. Klein, Jeremy Fowler of ESPN reports. Klein is expected to start on the practice squad. He had ... Read more »

Tesla Has Stock Traders Getting It All Wrong

Feline the love! Anya Taylor-Joy cuddles her beloved Aussie cat Kitsune as she is welcomed back to Sydney by the furry friend following a trip away

Woman shoots her accused rapist in foot after he breaks into home, Oklahoma cops say

‘It wrecked everything for everybody,’ Calgary mall bans students during the day