WATFORD, England (Reuters) -Mohamed Salah set up Sadio Mane’s 100th Premier League goal and scored a brilliant goal of his own, while Roberto Firmino bagged a hat-trick as Liverpool reclaimed top spot with a 5-0 win over Watford in Claudio Ranieri’s first game in charge. 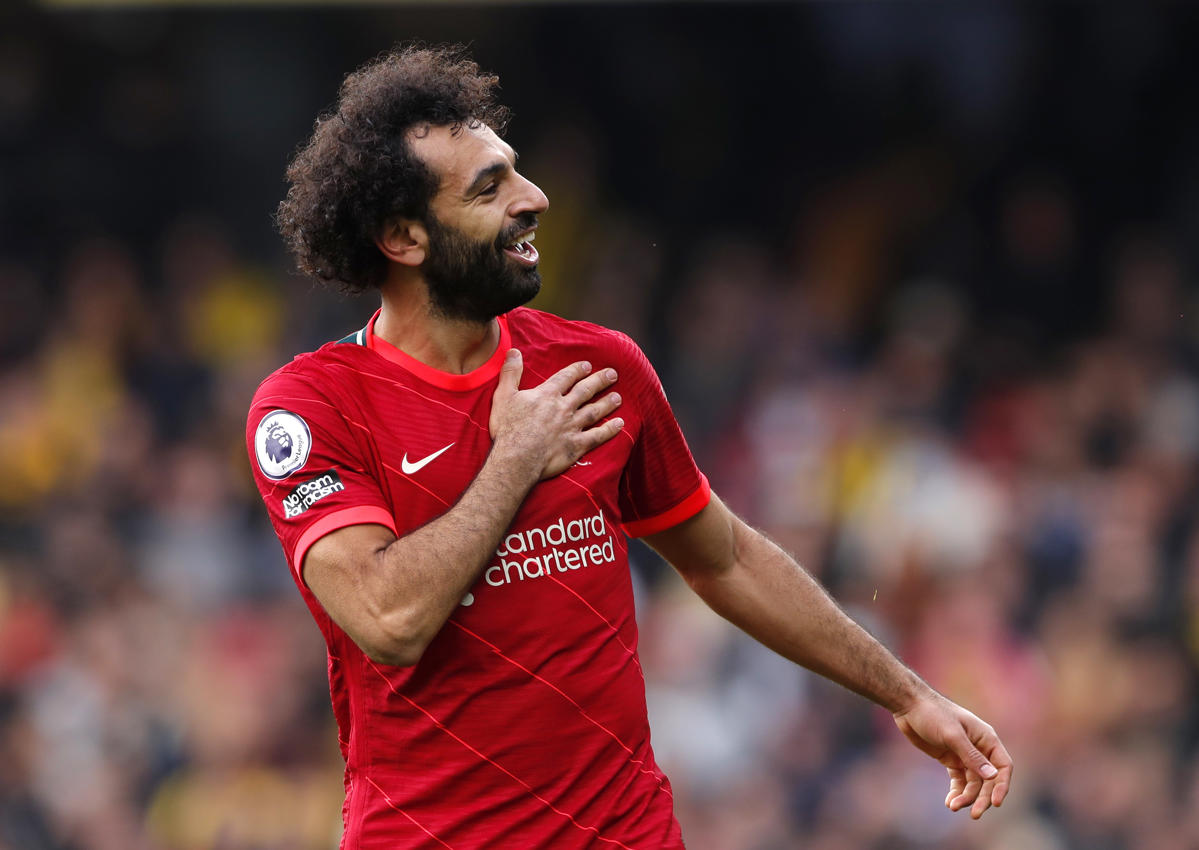 Firmino may have walked away with the match ball, but it was Salah that took the breath away in an individual attacking display full of the kind of vision, skill and guile that the watching Watford fans could only dream of from their side.

The visitors took the lead in the ninth minute when Liverpool won a Watford kickout, and Mohamed Salah played a sublime pass to Mane with the outside of his left boot for the Senegalese striker to notch his Premier League century.

Mane then picked out James Milner on an overlapping run and he drove a perfect ball across the goal for Firmino to steer home from close range in the 37th minute to put the Reds 2-0 up at halftime.

Watford defender Craig Cathcart endured a torrid afternoon, sliding to send a back-pass to Ben Foster that the goalkeeper spilled into the path of Firmino, who finished with a simple tap-in to make it 3-0. But the worst was still to come for him as Salah took possession in the box two minutes later.

Trapped in a triangle of Watford defenders, the Egyptian rolled his studs over the ball before bursting past Cathcart and then leaving him sliding in the wrong direction as he cut back and curled the ball home with his left foot for an exquisite solo goal.

“Every time I’m in the box, I’m trying to get the ball for someone to score or trying to score by myself. It’s always about the team, I always try to play for the team,” a beaming Salah told BT Sport.

“The most important thing is we scored good goals, all of us up front scored,” he added.

Ranieri, who took over as Watford boss on Oct. 4 following the sacking of Xisco Munoz, was left in no doubt about the size of the task he faces as Watford came up woefully short, and Firmino added his third in second-half stoppage time.

The win lifts Liverpool back to the Premier League summit on 18 points, two ahead of Chelsea who can retake the lead if they beat Brentford in Saturday’s late game. Watford are 15th on seven points.

Merson: Everton hoping Liverpool clash ‘doesn't get out of hand'

Did you know these 3 interesting facts about Cardiff City?

© Provided by Football FanCast traore With Liverpool having scored more goals (39) in the Premier League than any other team so far this season, with five scored in the ... Read more »

© PA Images Munster-players-v-Stormers-URC-2021-PA Munster have reported nine new positive Covid-19 cases among their players and staff after the latest round of PCR testing in Cape Town. The Irish province, ... Read more »

© PA Images Adama Traore gets off the coach ahead of a match Liverpool could save a huge amount of money if they buy Wolves winger Adama Traore in the ... Read more »

Ben Maher says that “everything has become reality” as he settles into life as Olympic individual showjumping champion. The 38-year-old British rider produced a dazzling performance under the Tokyo Equestrian ... Read more »

FILE PHOTO: The GSK logo is seen on top of GSK Asia House in Singapore (Reuters) – GSK has hired one of the scientists behind Pfizer's mRNA COVID-19 shot, Phil ... Read more »

1 / 6Right at Home-Outdoor DecorationsThis image provided by Tempaper shows their Christmas Village decals. The decals can be attached to any smooth surface. They’d make an interesting vignette on ... Read more »

© Provided by The South African Manchester United star Cristiano Ronaldo has hit back at a “disrespectful” claim that his only remaining ambition is to win the Ballon d’Or more ... Read more »

Currency transaction reports revealed that from May 24 through Aug. 24 Shalash cashed in $464,796 and cashed out $789,541 from the casino. A foreign national with local ties, currently wanted ... Read more »

On Location: November 29, 2021 Catch up on the developing stories making headlines.ABCNews.com BERLIN — German investigators said 14 suspects were arrested Tuesday in an investigation of a gang accused ... Read more »

The Associated PressA customer wearing a face mask prepares to leave a bakery, in Warsaw, Poland, on Friday Nov. 26, 2021. Poland is facing skyrocketing COVID-19 infections and deaths but ... Read more »

Alonso believes Hamilton should be penalised for exceeding his engine useMercedes changed Brit's engine for a fifth time before his win in Sao PauloHe was handed a five-place grid penalty for changing his engine again in BrazilHowever, Hamilton stormed back to win in Sao Paulo and again in QatarVerstappen and Alonso believe his punishment should've been more severe  Read more »

Aaron Rodgers not expected to have toe surgery at this time, per report