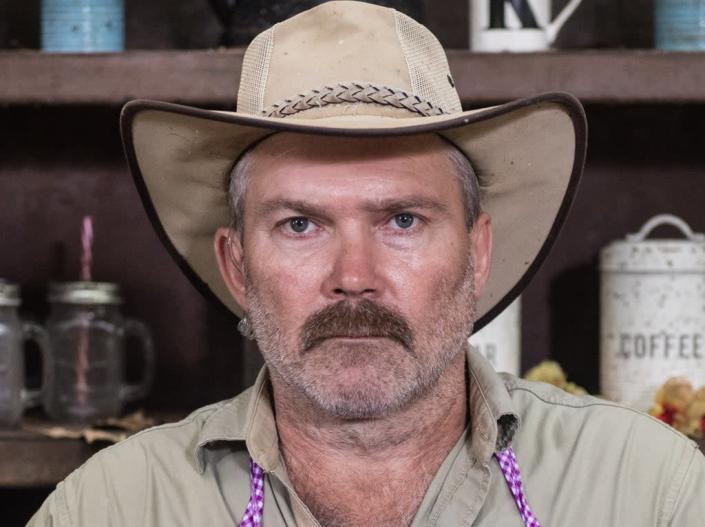 Why did Kiosk Keith leave I’m A Celebrity?

Kiosk Keith was just as much a staple on I’m a Celebrity as Ant and Dec, before he was allegedly fired from the show in 2017.

The Australian, whose real name is Raymond Grant, was the Outback Shack's one and only employee and he would greet celebrity campmates with silence and a stony stare after they completed a Dingo Dollar Challenge.

It was his job to take the contestants’ bag of dollars and ring the other stars back at camp, asking them a difficult question which, if they answered it correctly, earned them some treats from the Shack. If they got it wrong, however, he would slam down the shutters and the celebrities would be left with nothing.

Part-way through 2017’s series of I’m a Celebrity, Keith disappeared. At the time, Ant and Dec told fans he was unwell and he was temporarily replaced by a woman called Kiosk Kath.

The following year, in January 2018, ITV eventually confirmed Keith had left for good, releasing a statement, saying: “Ray is no longer under contract on the show. There are no plans for him to return this year.”

However, an insider reportedly told The Sun that Keith had an alcohol problem and alleged that he was inappropriate towards a female colleague.

“It wasn't unusual for Keith to turn up to work drunk as he's done it before but this incident has shocked everyone,” the source said. “He was drunk when he got on the bus in the morning. Then he behaved inappropriately towards a female member of the team who's half his age.”

His ex-wife Donna defended him, saying he is “no sexual predator” and should not be made out to be a “horrible man”.

Keith himself wrote a message to fans at the end of 2018, tweeting: “OK just read up that i’m no longer on the show for reasons I won’t say, you can find out yourself ffs. This account will no longer be used so enjoy this last tweet of mine.”

In 2018, Keith was officially replaced by Kiosk Kev, whose real name is Mark Herlaar.

Herlaar, however, was then replaced by Kiosk Cledwyn after the show moved to Wales. The Welshman, who insiders claimed to be named after the late local politician Cledwyn Hughes, is now back for the 2021 series as an employee at Ye Olde Shoppe.

I'm A Celebrity airs on ITV at 9pm.

Two vaccine doses and a previous infection provides 90% protection against Covid for more than a YEAR, new study suggests

Operation Red Meat: Tackling the BBC and migrants, a booze ban at No. 10, ditching Plan B Covid restrictions... the blitz of new measures as rattled Boris tries to steady the ship after 'partygate'

ANDREW PIERCE: Nadine Dorries is the viewers' champion who summoned Auntie's bosses... then gave them both barrels

The poor die from COVID while the rich get richer, Oxfam warns

Dancing with the Stars apologises over tech blunder during second episode

It appears as if Mike McCarthy isn’t having any fun in the NFL Playoffs as the Dallas Cowboys are floundering against the San Francisco 49ers. © Provided by Fansided The ... Read more »

Robbie is still good as Gould in the playoffs

There’s no better way to make yourself a legend as a kicker than reliability in the postseason. Sure, you can make most of your kicks when the season isn’t do-or-die, ... Read more »

The San Francisco 49ers went into Texas and are leaving with a victory over the Dallas Cowboys. © Provided by Touchdown Wire In a game fraught with tension, the NFC ... Read more »

There was more bad injury news for the 49ers defense in the fourth quarter of their wild-card matchup with the Cowboys. Linebacker Fred Warner went down with a non-contact injury ... Read more »

Of all the difficulties the Raiders faced this season, the Henry Ruggs III DUI crash was by far the worst. The crash resulted in the death of a woman and ... Read more »

Jimmy Garoppolo’s first drive against the Cowboys on Sunday saw him complete all three of the passes he attempted for 43 yards, and ended with an Elijah Mitchell rushing touchdown. ... Read more »

THE Tourist shocked its audience with two brutal murders in the opening minutes of the lastest. Some viewers of the BBC One thriller were shocked to see the gruesome scenes ... Read more »

CAROL Vorderman displayed her amazing curves in tight gym gear after walking 70 miles. The Countdown legend, 61, posted a series of pictures from the remarkable trek in Portugal. Carol ... Read more »

GOOD Morning Britain host Ranvir Singh has revealed she was sexually assaulted at the age of 12. The 44-year-old said talking to a victim of Ghislaine Maxwell and Jeffrey Epstein ... Read more »

STRICTLY Come Dancing star Claudia Winkleman shocked fans on her birthday when she revealed her age. The popular presenter was hosting her Radio 2 show this weekend when she dropped ... Read more »

A FAMILY has been TRAPPED in a “disgusting” mouldy flat for more than TEN years. Brian Gerson claims his wife, Kellymarie, and their four kids face “unliveable” conditions in an ... Read more »

Tennis legend hit out at Novak Djokovic for coming to Australia in the first placeThe iconic Australian Open commentator said it was clear 'wires were crossed' But 51-year-old said he would have saved his own blushes by staying in Serbia'Everyone involved here has lost,' the US four-time Grand Slam winner said'It would have been so much better if Novak had never come here,' Courier said Read more »

Showing him what his missing! Pip Edwards flaunts her sensational body in a bikini after eyebrow queen Kristin Fisher 'hooked up' with her ex Michael Clarke at a lavish New Year's Eve party

She is said to be ‘unhappy’ that her ex Michael Clarke ‘hooked up’ with celebrity eyebrow artist Kristin Fisher at a New Year’s Eve party two weeks ago. And Pip ... Read more »

Newly released documents appear to show top career officials at the Census Bureau had drafted a memo of concerns during the Trump administration’s attempts to exert political pressure on the ... Read more »

Reunion will have to wait, Lowry listed out for 'personal reasons' versus Raptors

MIAMI — The Toronto Raptors’ much-anticipated reunion with Kyle Lowry will have to wait a few weeks. © Provided by The Canadian Press The Miami Heat have listed Lowry out ... Read more »

© Provided by The Times of India MUMBAI: Medical aspirants have demanded that the post-graduate NEET 2022 be postponed. To their surprise, the exam date was declared as March 12, ... Read more »

© Provided by The Times of India HARIDWAR: The ‘pratikar yagya’ (revenge ceremony), which was organised by seers at the Sarvanand Ghat across Har-ki-Pauri on Sunday morning to protest police ... Read more »

© Provided by The Times of India MADURAI: Two tiny spears of gold and copper that have been taken in an annual ritual procession from Karaikudi to the Palani temple ... Read more »

Pune: Conservation efforts to get a boost if forest dept takes over Salim Ali park

© Provided by The Indian Express There are very few cities in the country that can boast of having migratory birds from as far away as Europe, Siberia, China and ... Read more »

© Provided by The Indian Express In a letter to the BMC commissioner, MLA from Samajwadi Party, and a corporator in the civic body, Rais Shaikh has requested the Mumbai ... Read more »

© Provided by The Indian Express THE MUMBAI Police on Sunday arrested seven people who had allegedly attacked police personnel and two animal rights activists in the Kurla area on ... Read more »

On backburner for 5 years: Rs 837 cr cyber security project being revived in Maharashtra

© Provided by The Indian Express A CYBER Security project worth Rs 837 crore that had been approved by the Maharashtra government in 2016 and was meant to be a ... Read more »

Probe Deoband fatwas on kids: NCPCR to UP

© Provided by The Times of India NEW DELHI: Taking cognisance of a complaint regarding “fatwas” on the Islamic seminary Darul Uloom Deoband’s website, the National Commission for Protection of ... Read more »

Pimpri-Chinchwad: Over 1,400 children in home isolation, only 55 hospitalised

© Provided by The Indian Express EVEN as Health Minister Rajesh Tope said on Sunday that the government will take a call on reopening of schools after a fortnight, it ... Read more »

© Provided by Dot Esports 12 buttons may sound excessive, but the additional features can be lifesavers in games. That’s why there’s a legion of excellent 12-button gaming mice on ... Read more »

With the omicron variant of COVID-19 spreading rapidly throughout Los Angeles, another celeb, Whitney Port, reveals she has tested positive. The 36-year-old star of The Hills took to her Instagram ... Read more »

New clues raise hope missing nine-year-old Charlise Mutten is alive as detectives prepare to interview her mum, 31, and swoop on property after witnesses reported seeing car with 'no lights on' at 4.30am

Charlise Mutten was last seen on Thursday afternoon at a lavish wedding venueShe was reported missing early on Friday, and has now been gone for four daysPlain clothes child protection squad officers drove into the property on MondaySchoolgirl usually lives with her grandmother in Qld, but was visiting her mumHer devastated mother Kallista Mutton, 31, will be questioned by police Do you know more? Email charlotte.karp@mailonline.com Read more »

Mumbai: Large multinational banks handling funds of offshore investors told the Reserve Bank of India (RBI) last week to either act as the “dollar buyer of the last resort” or ... Read more »

Video: ANOTHER large eruption hits Tonga volcano as fears grow for British charity worker, 50, who was swept away by Sunday's tsunami and hasn't been seen since - as NZ sends flight to assess damage in the remote island chain hit by 'once-a-millennium' blast

Nifty on course to all-time high, buy on dips to ride the rebound

Napoli 'congratulated' Atalanta and Inter Milan on their 'entertaining' 0-0 drawThe club's Twitter page shared the sarcastic post shortly after the final whistleThe results keeps Simeone Inzaghi's men two points clear at top of the tableIt also allowed Gian Piero Gasperini's men to move within two points of themSo, the Tweet that was published on Sunday was designed to be sarcastic   Read more »

Algeria 0-1 Equatorial Guinea: Riyad Mahrez and his superstar teammates faces shock exit after one of the biggest-ever AFCON upsets

Banking sector frauds could surge over next 2 years

Mumbai: Deloitte has warned that frauds in the banking sector could rise significantly over the next two years due to the large-scale remote working model, increase in customers using non-branch ... Read more »

'To catch City is like climbing Everest': Pundits weigh in on Premier League title race after champions dismissed challengers Chelsea... but warn Pep Guardiola that 'Everest has been climbed before'

Ian Wright and Danny Murphy have weighed in on the Premier League title race Pundits admit that catching up to Manchester City 'is like climbing Everest' nowLiverpool are City's closest challengers following Chelsea's loss at the Etihad  However, Murphy warned Pep Guardiola that 'Everest has been climbed' before  Read more »

Euphoria star joins The Last of Us show

Gene that can slash Covid severity by 20 per cent explains why symptoms hit some victims harder than others, scientists say

REVEALED: How to transform an old wooden cabinet into a stylish Hamptons-inspired coffee station

Home and Away shares Theo and Chloe kiss aftermath

Rangers fueled by Chris Kreider's career year: ‘Always been there for us'

Video: The cruel comment a model said to fitness star at a photoshoot in 2013 that made her stop eating lunch - and the message she wants all women to hear