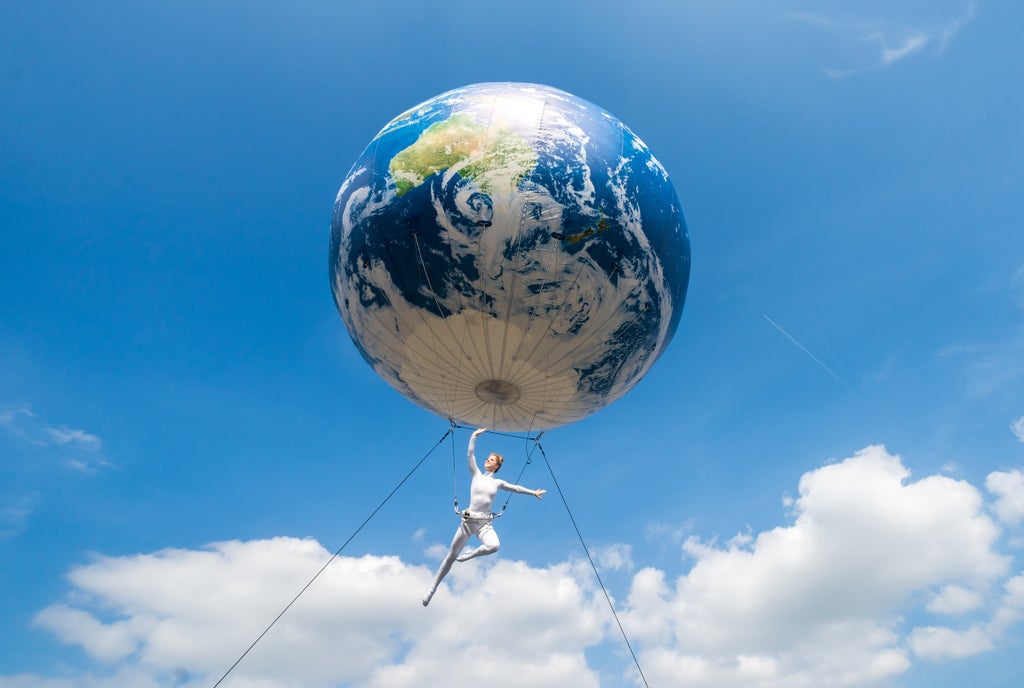 The UK is set to host the COP26, bringing together more than 190 world leaders to discuss climate change.

Alok Sharma, appointed full-time president, is leading the government’s efforts ahead of the 2021 climate change summit.

In the weeks before the summit, the government announced a number of green initatives, such as grants of £5,000 made available to households to replace their gas boiler with a low carbon heat pump.

Mr Johnson announced large scale investment in to green industries in a partnership with Bill Gates’ Breakthrough Energy Catalyst to drive an extra £200 million of private sector investment in climate-friendly power schemes in the UK.

But what exactly is the COP26 and what does it hope to achieve?

What is COP26 and what does COP mean?

Every year, the United Nations holds a global climate change conference known as a COP which stands for ‘Conference of the Parties’.

This year marks the 26th anniversary, giving it the name COP26 with the UK as its president.

Among the largest international meetings in the world, the summit is regarded by many to be the world’s last best chance to get runaway climate change under control.

It is seen as a critical opportunity to win more ambitious country-to-country commitments on achieving net-zero carbon emissions by 2050 and keeping the global average temperature rise to well below 2 degrees Celsius this century.

The UK is working with every nation to reach agreement on how to tackle climate change in the run up.

When is the COP26 summit and where is it?

The COP26 will take place in November at the Scottish Event Campus in Glasgow.

It is part of the C40 Cities network, a group of nearly 100 major cities worldwide working for faster action on climate change.

Who is attending COP26 and is Greta Thunberg going?

More than 190 world leaders are expected to attend the Glasgow summit along with tens of thousands of negotiators, government representatives, citizens and businesses.

The Queen pulled out of the COP26 conference in Glasgow after she was advised by doctors to rest, Buckingham Palace said on Tuesday.

Greta Thunberg is the latest to add her name to the list, joining others including Pope Francis, US President Joe Biden, presidential envoy for climate John Kerry, and Sir David Attenborough.

Initially, she believed that the summit should be postponed saying the UK government should wait until global vaccination rates have risen.

However, Ms Thunberg has changed her stance, as confirmed in a statement she gave after the publication of the UN’s IPCC Report on August 9th, 2021.

“I’ve said before that I wasn’t going to go if it wasn’t fair,” Ms Thunberg said. “But now they say that they will vaccinate all the delegates that are going there. If that’s considered fair and safe, then I will hopefully attend.”

The natural historian also has a role at the conference, as COP26 People’s Advocate, in a bid to convince world leaders climate change is a real threat.

Absolutely delighted that Her Majesty the Queen will attend #COP26! @RoyalFamily https://t.co/fJchlysKt8

What do they hope to achieve?

The COP26 summit brings parties together to speed up action towards the goals of the Paris Agreement and the UN Framework Convention on Climate Change.

Prime Minister Boris Johnson said: “Securing a brighter future for our children and future generations requires countries to take urgent action at home and abroad to turn the tide on climate change.

“It is with ambition, courage and collaboration as we approach the crucial COP26 summit in the UK that we can seize this moment together, so we can recover cleaner, rebuild greener and restore our planet.”

What is the UK doing about climate change?

In the run up to Cop26, Mr Johnson has called for billions of investment into green technologies. He announced a new partnership with Bill Gates’ Breakthrough Energy Catalyst to drive an extra £200 million of private sector investment in green power schemes in the UK.

Speaking at the Government’s Global Investment Summit on October 19, Mr Johnson said the power of consumer choice and the trillions of dollars able to be invested by companies were essential for creating green growth and jobs.

The UK’s path to ending our contribution to climate change will be paved with well-paid jobs, billions in investment and thriving green industries – powering our green industrial revolution across the country.#NetZero pic.twitter.com/QJgHypBjWJ

Downing Street said plans being announced at the summit would see £9.7 billion of new overseas investment in the UK, creating 30,000 additional jobs.

The Prime Minister said the “green industrial revolution”, the freedom to deviate from European Union regulations after Brexit and the “levelling up” agenda were three reasons why firms should invest in the UK.

Meanwhile, it was announced that grants of £5,000 will be available to households to replace their gas boiler with a low carbon heat pump as part of efforts to cut emissions from homes.

The Government announced the grants as it confirmed a target for all new heating system installations to be low carbon by 2035 but insisted families are not going to be forced to remove their existing fossil fuel boilers.

Switching to low carbon heating in the coming years will cut emissions, and reduce the UK’s dependency on fossil fuels and exposure to global price spikes in gas, ministers said.

But experts and environmental groups warned the £450 million three-year pot to switch from boilers would only pay for 30,000 heat pumps a year, a fraction of what is needed to meet Government targets.

Elsewhere, the government has pledged that new petrol and diesel vehicles will no longer be sold by 2030 and legally binding targets will be introduced to restore nature and radical reforms to agricultural subsidies.

A Ten Point Plan for a green industrial revolution has been set out by Mr Johnson which aims to help the UK reach its climate commitments.

At the same time, it should create thousands of highly skilled jobs with many more Britons earning a living from clean green jobs.

Kamala Harris described as a ‘bully' and ‘soul destroying' boss

It's official! 'Fear TWD' fan-favorite Madison is returning to the show next year after seemingly being killed off the spin-off years ago

Everton may have major advantage over Arsenal but Liverpool highlighted worry

If ever there was a time that Everton need to turn Goodison Park into a fortress then it’s for Arsenal’s visit on Monday night. Everton have gone eight Premier League ... Read more »

Celtic is tough, but whoever is in defence will slot in, says Well star

Bevis Mugabi says he knows his Motherwell team-mates inside out, so whoever he’s paired with against Celtic on Saturday will be fine. Alexander’s side are struggling for numbers at the ... Read more »

It may not have felt like it at the time but, more and more, it’s starting to feel like Steven Gerrard did Rangers a favour when he bolted back over ... Read more »

All eyes on Vicky-Katrina's wedding venue

© IANS All eyes on Vicky-Katrina’s wedding venue Jaipur, Dec 6 (IANS) Ahead of the proposed wedding between Bollywood stars Vicky Kaushal and Katrina Kaif on Thursday, all eyes are ... Read more »

Bigg Boss 15: All About The Weekend With Sara Ali Khan And Raveena Tandon

Weekend Ka Vaar with the host of Bigg Boss, Salman Khan was indeed a good one, full of drama and frisk, adding special guests to the entertainment. Shamita Shetty And ... Read more »

'It's a dream come true. I sound like John Mullane now…I was going to say I love my club!'

© James Crombie INPHO Celebrations for Austin Stacks. EARLY DECEMBER GLORY in Tralee and emotion flowed freely at the final whistle. Getting Austin Stacks back to the summit of Kerry ... Read more »

COVID-19: Italy brings in tougher restrictions for the unvaccinated - but there are doubts as to how rules will be enforced

The Italian government is trying to cope with a new wave of the pandemic and those unwilling to be vaccinated will have restricted access to a number of services. Read more »

© Provided by Khaleej Times Wam Dubai real estate sector has recorded 55,651 sales transactions worth Dh135.4 billion in the first 11 months of 2022. According to data released by ... Read more »

© Provided by The Guardian Photograph: Anadolu Agency/Getty Images A friend’s grandmother once told me a story about her late husband’s English golf club. It was the 1960s, and she ... Read more »

© Provided by The Guardian Photograph: Victoria Jones/PA On one side is Tate Modern. On the other are the owners of nearby luxury apartments objecting to what they regard as ... Read more »

© GiveMeSport Ralf Rangnick A new era is underway at Manchester United – and it’s underway with a win. Ralf Rangnick was in the dugout for the first time as ... Read more »

Hope on the banks of the Clyde: Cop26 legacy sculpture installed

© Provided by The Guardian Photograph: Murdo MacLeod/The Guardian A new public sculpture that calls for optimism about humanity’s response to the climate crisis has been installed in a park ... Read more »

james jimenez comelec The Commission on Elections (Comelec) on Monday said its recently-approved guidelines for the conduct of in-person campaign and rallies would only take effect in February. In a ... Read more »

Around 43 medical students at the Chalmeda Anand Rao Institute of Medical Sciences at Bommakal in Karimnagar district of Telangana have tested positive for COVID-19 after the college held its ... Read more »

COVID shots are finally arriving, but Africa can't get them all into arms

1 / 5COVID shots are finally arriving, but Africa can’t get them all into armsHealthcare professional administers a dose of coronavirus disease (COVID-19) AstraZeneca’s vaccine, in Narok By Maggie Fick ... Read more »

'Fear TWD' will return in April 2022. A new trailer teases a war between Alicia and Victor.

© Provided by Al Jazeera Some rescue efforts at the eruption of Mount Semeru volcano had to be suspended on Monday because of poor weather [Willy Kurniawan/Reuters] Search and rescue ... Read more »

© Handout Suu Kyi has been detained since the generals ousted her government in the early hours of February 1 A Myanmar court on Monday jailed ousted civilian leader Aung ... Read more »

Photograph: Christopher Thomond/The Guardian Lib Dems are hoping for a spectacular upset in North Shropshire constituency that has long been a Conservative stronghold If Boris Johnson’s decision to join the ... Read more »

Graeme Hunter/HBO After the past seven episodes, it looked like things might not change much during the third season of “Succession.” Then, in “Chiantishire,” the pieces are suddenly shuffled heading ... Read more »

As coronavirus concerns resurface with the possibly more infectious Omicron strain and the US Federal Reserve taper remains on cards, Indian markets will likely continue to see a pullback, Sandeep ... Read more »

(Reuters) – A probable case of the Omicron variant has been identified in a crew member of a Norwegian Cruise ship that reached New Orleans on Sunday after detecting COVID-19 ... Read more »

Despite the virus being considered primarily as a lung infection, scientists are finding it is also targeting the heart – Dominic Lipinski/PA One in eight patients hospitalised with Covid also ... Read more »

Bharat Shah, Hiren Ved on sectors to bet on for this decade

What are the latest Covid travel rules and why has Nigeria been added to red list?

Victims of botched up cataract surgeries in Bihar gripped in fear

IND vs NZ: Where does Team India stand at WTC points table after mammoth win over New Zealand in 2nd Test

On This Day in 1991: When India and West Indies Play Out a Thrilling ODI Tie