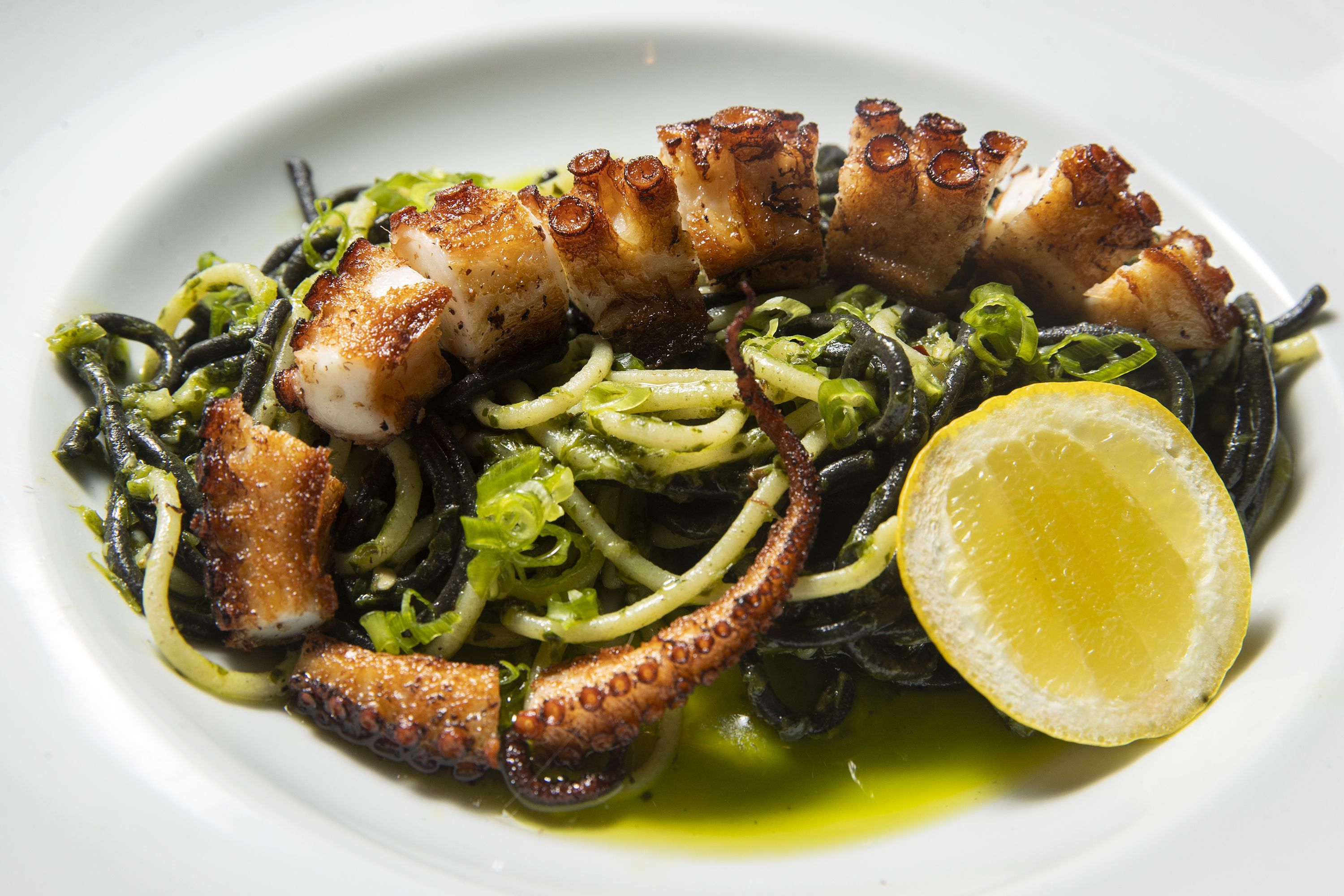 The chitarra spaghetti with octopus at Tresini.

“What’s new to take my friends visiting from out of town?”

“I’m originally from Philly and I’m coming home. Tell me what’s opened that I need to try?”

Here are some answers, followed by a sampling of restaurants on the way in the next two months or so.

For the first time in decades, you and your guests cannot make a pilgrimage to Jim’s Steaks or Melrose Diner. Both landmarks were shuttered by fires in July and won’t reopen till 2023. (If you want alternatives, I’ll suggest Brazas BBQ Chicken, a half-block from Jim’s at 326 South St. for Peruvian-style chicken, and HomeGrown Coffee at 1515 Porter St., whose diner offerings are not too far off from the Melrose.) Also, Royal Tavern at 937 E. Passyunk Ave. is still in its pandemic-era slumber, with no announced date of return. 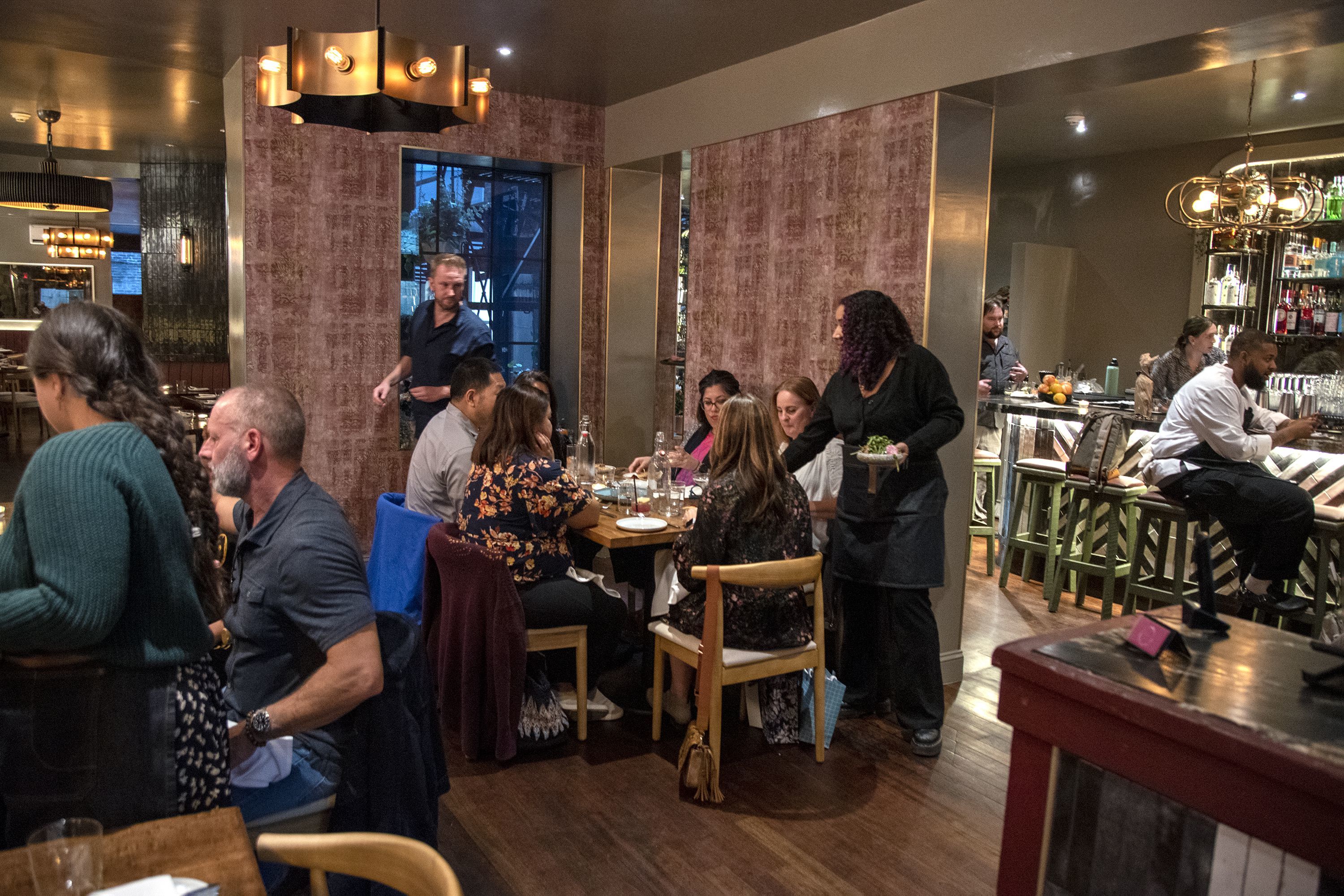 You also need to know that Cavanaugh’s Rittenhouse is not where you left it. Over the summer, it moved a block west into a new building.

Char & Stave (8441 Germantown Ave., Chestnut Hill): The coffee roastery/cafe/cocktail bar from Bluebird Distilling founder Jared Adkins is starting with a pop-up through Jan. 4 that precedes the spring 2023 grand opening. Get a cup of coffee, a cocktail, or a bottle for gifting.

Honeysuckle Provisions (310 S. 48th St., West Philadelphia): Chefs Omar Tate and Cybille St.Aude-Tate are in the early weeks of their grocery store/takeout that focuses on the values of nourishment and reclamation of Black food traditions and cultural aesthetics.

The Pullman (39 Morris Ave., Bryn Mawr): The former Tango at the Bryn Mawr train station has been upgraded into an expansive, old-fashioned rail-theme bar-restaurant with a traditional, throwback-style menu, cozy dining nooks, and live music.

Redcrest Kitchen (625 S. Sixth St., Queen Village-Bella Vista): Lots going on at this smartly appointed, warm-vibed bar-restaurant on the corner of Sixth and Bainbridge: small grocery section, fried chicken to go during the day, food and drinks in the evening.

Restaurant Aleksandar (126 S. 19th St., Rittenhouse): Modern Slavic is the concept at this upscale bar-restaurant in the former V Street.

Twenty One Pips (24 Cricket Ave., Ardmore): Fun in the form of board games, as well as food and drinks. It’s the sibling of Philadelphia’s Thirsty Dice.

Bagels & Co.(1526 Sansom St.): The growing bagel shop is taking the former Goldie space. (With Kismet Bagels opening a block and a half away, is this the first round, as it were, of a bagel war?)

Brooklyn Dumpling Shop (3400 Lancaster Ave., University City): Dumpling dispensed from an Automat-style vending machine. It’s better than it sounds. A second Philly location is being teed up for 308 South St.

Ground Provisions (1388 Old Wilmington Pike, West Chester): Rich Landau and Kate Jacoby of Vedge are venturing out to the countryside with a plant-based market-restaurant in the former Innkeeper’s Kitchen at Dilworthtown.

Kismet Bagels (1700 Sansom St., Rittenhouse): The fast-growing bagel shop is planning to roll out its second location during the week of Dec. 5. A bialy stand is on the way to Reading Terminal Market.

Horoscope for Monday, 1/30/22 by Christopher Renstrom

Lisa Loring, who played Wednesday in the original ‘Addams Family’ series, dies at 64

Tourism Is Roaring Back in China. But the $6 Trillion Consumer Market Is Digging Itself Out of a Deep Slump

Is the NFL rigged? Fans on Twitter certainly seem to think so. The Chiefs just beat the Bengals 23-20 in the AFC Championship Game. Officiating was questionable, at best. However, ... Read more »

US President Joe Biden speaks to the media about Tyre Nichols as he walks to Marine One prior to departure from the South Lawn of the White House in Washington, ... Read more »

WASHINGTON, DC – JANUARY 27: U.S. President Joe Biden speaks to members of the press on the death of Tyre Nichols prior to his departure from the White House to ... Read more »

Pregnant Woman Ejected From Car As ‘Drunk’ Boyfriend Crashes At 100 MPH; Car Splits In 3 & Man Is Charged With Manslaughter

A 23-year-old pregnant woman named Adriana Sylmetaj was tragically killed after being ejected from her car as her “drunk” boyfriend — identified as 30-year-old Adem Nikeziq — crashed while driving ... Read more »

'One of those moments': Giannis Antetokounmpo nets 50 for Bucks

NBC Universal, Inc. Temperatures began to dip on Sunday, a preview of what’s to come at the beginning of the week as freezing rain is expected in the forecast. Slick ... Read more »

This is CNBC’s live blog covering European markets. European markets are heading for a lower open Monday as investors focus on the next U.S. Federal Reserve meeting that begins Tuesday. ... Read more »

Eagles showcase all the ways they can beat you, even with Jalen Hurts not at his best

The Philadelphia Eagles punched their ticket to the Super Bowl in dominating fashion with a 31-7 win over the San Francisco 49ers in the NFC championship game Sunday. The game ... Read more »

LINCOLN, Neb. (KOLN) – Vine Street has been shut down in central Lincoln as firefighters battle a house fire near 29th Street. The call came in just before 10:30 p.m. ... Read more »

Eagles’ Jalen Hurts went from unwanted to NFC champion. He has the cigar to prove it.

Expert: Some homeless have just fallen on hard times, want help The Kitsap County Department of Human Services estimates that one in every 240 people of the county’s 267,000 residents ... Read more »

Newark Bay in Bayonne. A man’s body was found Friday, Jan. 27 off the Hudson County shoreline, authorities announced. The discovery was made on the shoreline of Newark Bay near ... Read more »

Sam McDowell: Five things that stood out about the Chiefs’ win against the Bengals

Kansas City Chiefs quarterback Patrick Mahomes looks for a receiver during the first half against the Cincinnati Bengals in the AFC Championship game on Sunday, Jan. 29, 2023, at GEHA ... Read more »

Hamilton Man Dies After Being Struck by a Car in Ewing

EWING, NJ — A Hamilton Township man has died after being struck by a motor vehicle at an Ewing intersection during the Wednesday evening commuting hours according to the Ewing Township Police ... Read more »

ST. PAUL, Minn. — It’s a scenario that seems out of a movie — 71 autopsies in murder cases are under review because the Ramsey County Medical Examiner’s work has come ... Read more »

The Philadelphia Eagles punched their ticket to Super Bowl LVII after a dominating defensive performance on Sunday. The Eagles held the San Francisco 49ers to just one score in their ... Read more »

"People are getting ripped off": How to pick up on and avoid an ice dam scam

MINNETONKA, Minn. — Steve Kuhl, CEO of the Ice Dam Company, says his workers have been busier than ever this winter season. A combination of heavy snow and fluctuating temperatures has ... Read more »

water being poured into glass Staying hydrated is a challenging thing to do, especially when you feel like you’re drinking too much water. However, some people don’t know how much ... Read more »

Anyone who has ever worked in the customer service sector knows the saying: “The customer is always right.” But there have been so many instances in which that’s just not ... Read more »

Gary Sinise opens up about being a conservative in Hollywood

Burrow comes up short of leading Bengals back to Super Bowl

Are you ready to drink a “Clean Juice?” On Saturday, the juice bar opened its first location in Nevada in Las Vegas at 4195 S Grand Canyon Dr. To celebrate ... Read more »

This photo provided by Daniel Esteban Paez shows Tortuguita, left, with their nephew in 2020 in Charleston, S.C. Officials have said officers fatally shot Tortuguita in self-defense after the protester ... Read more »

Patrick Mahomes is done hearing about all this “Burrowhead” talk. During his postgame interview on Sunday night, Mahomes took a shot at Joe Burrow and the Bengals. The Chiefs quarterback ... Read more »

'You just can’t have it': Bengals lament worst mistake at worst time vs. Chiefs

'Know your role and shut your mouth': Travis Kelce calls out Cincinnati mayor after win

Man trying to stop auto burglary in St. Paul shot in both feet

‘Blink Twice if You Need Help, Senator!’ MSNBC’s Ayman Mocks Lindsey Graham Being All-In for Trump 2024 Despite Previously Disavowing Him

Did officials give Kansas City a fourth-quarter do-over in AFC Championship game?

John Finn: The First Person to Receive the Medal of Honor During World War II

New Zealand city to get more dangerous rainfall after flood

'People don't realize how hurt he was': Patrick Mahomes battles through injury to put Chiefs in SB