Strictly Come Dancing is back at it once more and fans can’t get enough of the legendary BBC competition. It’s already been a month since the latest series commenced, and each celebrity has been giving it all on the dance floor. Above all, they are at the mercy of the adoring public, with no one safe in week four.

There are now 12 celebrities left in the competition, with Hollyoaks’ Katie McGlynn the second star to go last week.

McGlynn and her dance partner Gorka Marquez followed Nina Wadia and Neil Jones who left the competition in its second week. 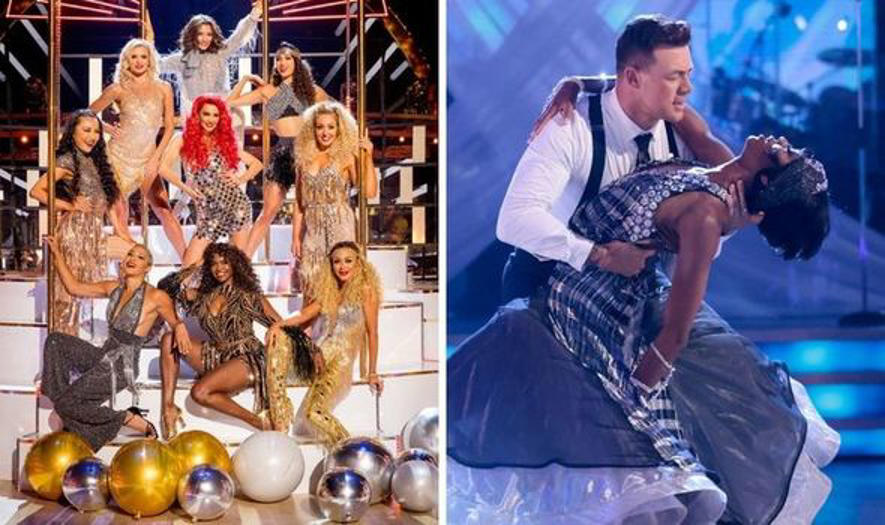 To see the judge’s verdicts, Strictly will air at 7pm on BBC One.

It is hard to judge who will be leaving as the competition is heating up as the weeks continue to roll by. 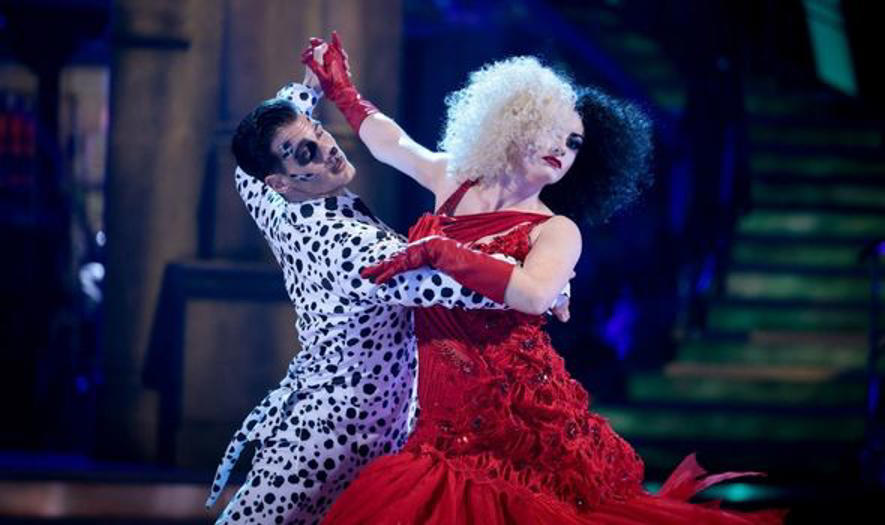 Robert Webb and dance partner Dianne Buswell surprised fans earlier this week with the announcement of their departure, taking them out of the competition.

Webb decided to leave due to ongoing health complications, explaining: “I’m extremely sorry to have to announce that I’m withdrawing from Strictly Come Dancing due to ill health.”

As such, the 13 remaining contestants were taken down to 12, making this year’s race even closer. 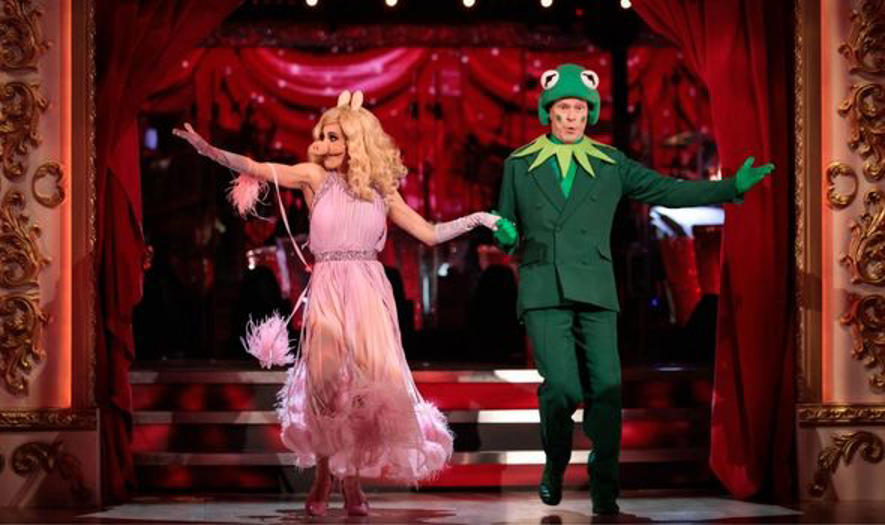 Who is left in the competition?

Following the exit of Webb and Buswell, one of the following will leave during Sunday’s show. 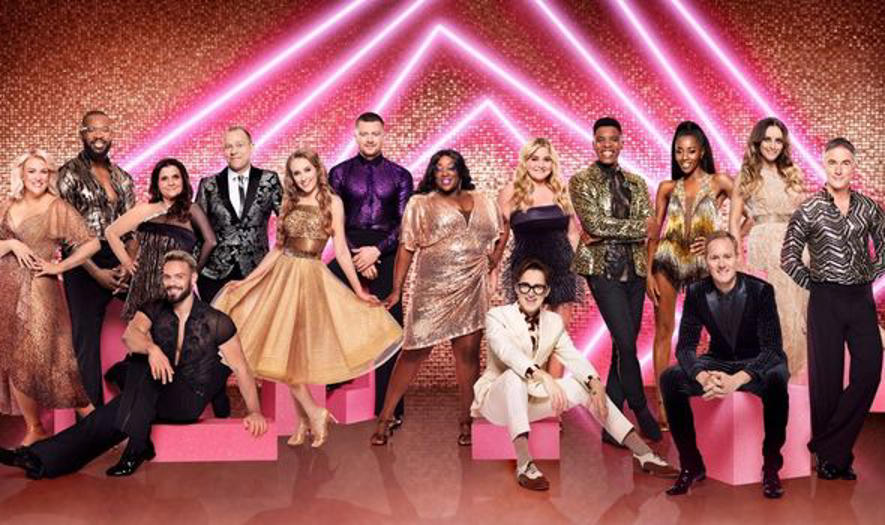 It has already proven to be a tumultuous year for Strictly as Tom Fletcher and Amy Dowden had to take a break from the competition.

They returned in week three, after self-isolating following a positive COVID-19 test.

So far in the competition, AJ Odudu and Kai Widdrington have been enjoying the lead, though it has been a close race.

They have been closely followed by John Whaite and Johannes Radebe, as well as Rhys Stephenson and Nancy Xu in the third position.

Down at the bottom is Ugo Monye and Oti Mabuse, now in last place following Wadia’s exit.

Greg Wise and Karen Hauer, as well as Rose Ayling-Ellis and Giovanni Pernice are only slightly above.

The couples moved down in the ranking after Webb’s surprise departure.

Strictly Come Dancing returns October 16 at 7pm on BBC One.

When Royal Mail's last Christmas post date is for the UK, Europe, USA, Australia, and more

Inside Zeman Awwal, a new cultural space in Mall of the Emirates celebrating UAE heritage

© Provided by The National A traditional Emirati wedding reenactment at Zeman Awwal, the new cultural space at Mall of the Emirates. Khushnum Bhandari / The National A permanent cultural ... Read more »

Abhishek Bachchan and Rakul Preet Singh loved Ranveer Singh’s 83 trailer. The much-awaited trailer of Ranveer Singh and Deepika Padukone-starrer 83 has been released. Fans have been eagerly waiting for ... Read more »

© Jemal Countess/Getty Images With Creed III, Michael B. Jordan will be stepping behind the camera for the first time as a director, and Tessa Thompson couldn’t be more excited ... Read more »

© The Manila Times WALK FOR LENI IN 2022 Supporters of Vice President Maria Leonor ‘Leni’ Robredo, a presidential apsirant in the 2022 national elections, launch the ‘unity walk’ in ... Read more »

Jio plans to get expensive soon, advanced monthly recharges and annual plans you can opt to avoid tariff hike

Starting tomorrow, December 1, Jio prepaid plans will get expensive by up to 21 per cent. To avoid tariff hikes, users can opt for monthly recharges in advance through Jio’s ... Read more »

Xiaomi 12 launch soon: Specs, features, India price, and everything we know so far

Mi 11 The Xiaomi 12 series has seen a plethora of leaks in recent times. It was earlier reported that the smartphone could launch on December 12. However, according to ... Read more »

Omicron variant could have emerged from AIDS patient with prolonged Covid, scientists suspect

© Provided by The Print New Delhi: The Omicron variant, which has health authorities worried across the world, may have emerged from a patient with HIV/AIDS and a prolonged Covid-19 ... Read more »

Legendary Pakistan batter Inzamam-ul-Haq expressed disappointment over the final result of the 1st India-New Zealand Test match in Kanpur, saying that he was shocked upon seeing that “this Indian bowling ... Read more »

Why regulating cryptocurrencies is a big challenge for govt | OPINION

Much has been debated over the cryptocurrencies that has posed a significant regulatory challenge to policymakers. In its worst, the argument of cryptocurrency backers is the threat of the nuisance ... Read more »

Woolworths Australia has launched its plant-based Christmas offeringsThis year there are five new products including a one kilo choc hazelnut cakeThere is also two types of dairy free custards and $15 roast with cranberry saucePuddings, fruit mince pies and gingerbread cookies will be sold at the bakery  Read more »

Man is jailed for savage attack on his partner where he bit off a large chunk of her lip, leaving her teeth exposed after drinking TWO bottles of vodka

Siemens: Why analysts see upside capped for this stock

NEW DELHI: Siemens ‘ September quarter results disappointed the Street, with analysts saying the stock did not account for margin pressure in the near future, even though it has re-rated ... Read more »

Prime Minister Narendra Modi will inaugurate the InFinity Forum, a thought leadership forum on FinTech, on December 3 via video conferencing. The Prime Minister’s Office said the event is being ... Read more »

omicron turbulence – Toby Dexter for The Telegraph Shai Weiss, the boss of Virgin Atlantic was feeling bullish. “I personally don’t see the UK and US reverting to the shutting ... Read more »

PARIS (Reuters) – A person has tested positive for the new Omicron variant of the coronavirus on the French Indian Ocean island of La Reunion, media reported on Tuesday, citing ... Read more »

Van Bronckhorst was a spectator at Hampden 10 days ago when Martin Boyle’s hat-trick stunned the Scottish champions, the 3-1 Premier Sports Cup semi-final victory booking Hibs a place in ... Read more »

Jamie Murphy on why Hibs 'owed' Jack Ross a win, scoring the winner at St Johnstone, and his frustrating fitness battle

The strike meant far more to the 32-year-old. He had already seen one effort superbly saved by Zander Clark and dragged another shot wide, both after teeing up Kevin Nisbet ... Read more »

Exclusive: ´I've not been 100 per cent but feel in a good place now', says Hearts winger Gary Mackay-Steven

The 31-year-old was something of a surprise selection against St Mirren on Saturday, but scored the crucial opening goal before being replaced after just over an hour. © Gary Mackay-Steven ... Read more »

Christian Doidge, who is suspended for the visit of Rangers on Wednesday night, is expected to feature as he continues his comeback from the Achilles injury that kept him sidelined ... Read more »

California now limits medical parole to those on ventilators

EXCLUSIVE: Young woman who saved $28,000 working in a Nepalese orphanage to study in Australia fears she'll lose it all - as 200,000 visa holders are left in limbo after Omicron travel ban

Niya Tamang, 24, saved $28,000 working at an orphanage to study in Australia  Her dreams were crushed when the borders closed to non-citizens on MondayShe is among 200,000 people stuck in limbo amid Omicron travel bans Ajay paid $24,000 for his degree, and is worried he'll lose half due to travel bansBorders were meant to open on December 1, but the plans were put on pauseA woman in her 30s has been identified as Australia's sixth Omicron case  Read more »

Video: Prince Charles brands slavery an 'appalling atrocity which forever stains our history' as he witnesses Barbados end four centuries of ties to Britain to become a republic and replace the Queen as head of state with a new president

Your chef-approved food hack: How to get the perfect Christmas lunch DELIVERED - and it's sure to impress the whole family

Providoor is offering Christmas lunch delivered straight to your doorThe offer is aimed at foodies in Sydney, Melbourne and Canberra this year From traditional feasts featuring seafood and hearty roasts to Asian cuisine Read more »

© Philip FONG Vincent Fichot’s case has revived debate over the issue of ‘parental abduction’ in Japan French authorities have issued an arrest warrant for a Japanese woman whose two ... Read more »

Draconian border security doesn't work and costs lives. Why is Britain pushing it?

Omicron virus: What are the UAE and Middle East travel rules?

Coronavirus: Singapore tightens testing for all travellers amid Omicron concerns

Not everyone believes Messi should have won the Ballon d'Or

For China, reining in real estate a high-stakes balancing act

'A lot of people said to me, 'What are you doing?' - Pat's move pays off for Cup final hero Benson

To Tackle Climate Change, It's Time We Put Our Money to Work