In a matter of hours late yesterday, the WA government rushed legislation through the state's lower house in a bid to hang onto broad-ranging pandemic powers for a further six months.

The bill still has to pass the upper house, but that's a mere formality as WA Premier Mark McGowan has complete control over both houses of parliament.

It will be the fourth time the powers have been extended since the pandemic began, but it's a little more controversial this time.

So what's happening, and why does it matter?

Let's start at the beginning. What is the state of emergency?

Ordinarily, the state government can only do so much without going through parliament to pass legislation.

The Emergency Management Act 2005 (WA) provides a framework for the government to exercise additional powers during emergencies, like natural disasters and pandemics, so they can be dealt with quickly and effectively.

To access those powers, the Emergency Services Minister has to declare a state of emergency – which the government has done every fortnight since March 15, 2020. 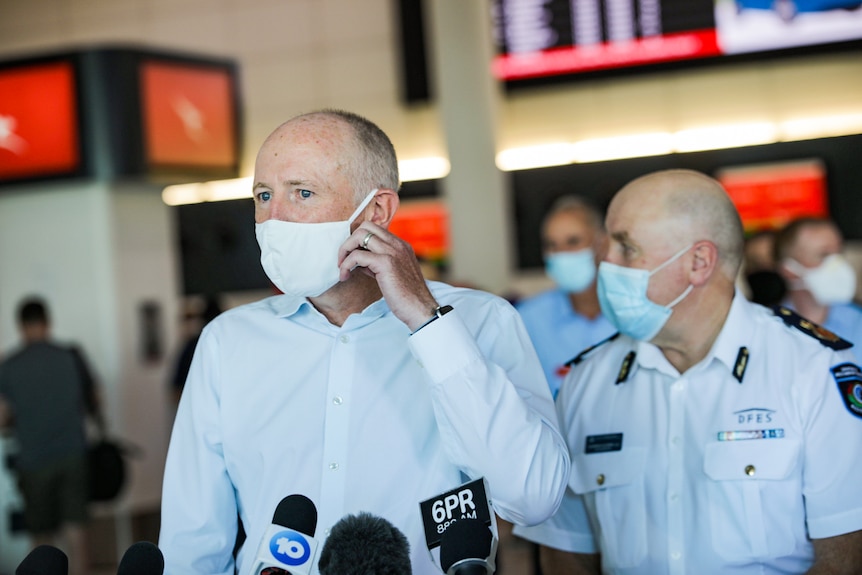 They can only do that on the advice of the State Emergency Coordinator, which is currently Police Commissioner Chris Dawson.

We'll likely never know what exactly that advice looks like, because the current Minister, Stephen Dawson, revealed in Parliament yesterday it's given verbally at fortnightly meetings.

So does this new legislation extend the state of emergency?

No. The state of emergency can be renewed an unlimited number of times, but generally for no longer than a fortnight at once.

The bill that passed the Legislative Assembly last night extends a specific part of the Emergency Management Act — section 72A.

That part was added to the Act in 2020, at the start of the pandemic, and was meant to expire after a year.

But, because some of the legal directions that underpin WA's pandemic response only have any legal effect because of section 72A, the government has extended it a number of times.

At the moment, it's due to expire on July 4, but once the bill that passed last night also passes the upper house, those powers will be available until January 4, 2023.

What is the government using that power for?

There are a range of ways the government has enforced restrictions over the last two years, and section 72A is just one of them.

At the moment it's being used to:

So the government can use those powers for the next six months?

The powers are only available for as long as a state of emergency is in effect.

“They will drop away as soon as the state of emergency is over,” Premier McGowan said yesterday.

“We won't keep the state of emergency in place for any longer than we need to, but if we get rid of them we'll have adverse health outcomes and I don't want to see that.”

But even without section 72A, there are other ways the government could continue to impose restrictions, with or without a state of emergency.

For example, workplace vaccine mandates are given effect under the separate Public Health Act.

What's the issue then?

The key concern is that the powers exercised under section 72A aren't really subject to scrutiny in the same way that legislation normally is — despite the fact the directions function in a very similar way to laws passed by parliament.

Ordinarily, legislation is debated in parliament, the opposition and other members have the chance to scrutinise it, and the government has to justify why it's passing that law.

But that all gets skipped with the Emergency Management Act. 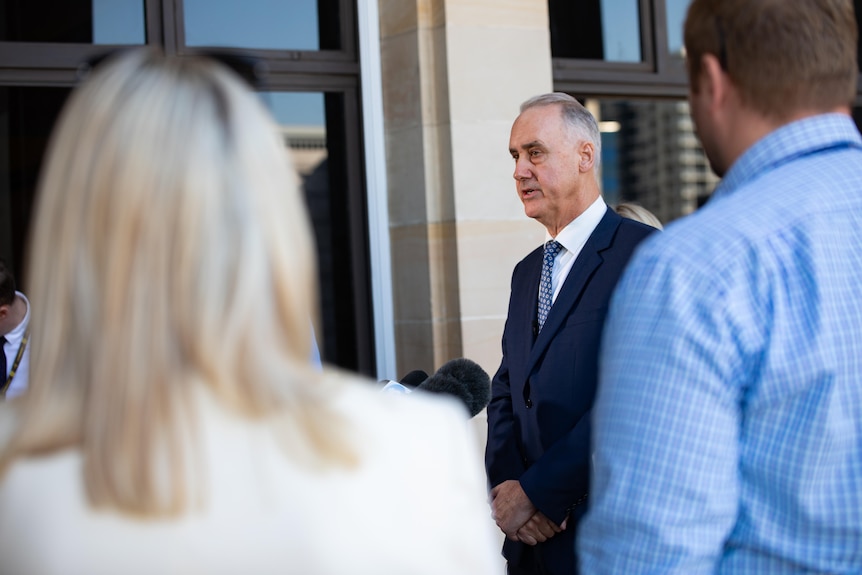 “The Public Health Act, as we understand it, gives ample power for the government to make many decisions,” he said.

“If the Public Health Act is deficient, the government have had two years to amend it.

“We are greatly concerned that the government have avoided a lot of scrutiny on the decisions, and this is just a way to avoid public scrutiny.”

What are other states doing?

South Australia's recently elected Premier Peter Malinauskas yesterday introduced legislation to amend its Public Health Act and allow for the state to end its emergency management direction (which is similar to WA's state of emergency declaration).

Those amendments will allow isolation requirements, vaccination and mask mandates in certain places and other rules to continue unaffected.

But lockdowns, broad mask mandates and hospitality restrictions would require another state of emergency to be declared to return. Victoria's pandemic laws, which have been supported by many experts, go even further with a pandemic oversight committee.

The state's parliament can also disallow measures it doesn't agree with.

Mr McGowan has all but ruled out taking a similar path previously, saying the existing legislation, including section 72A, is adequate for WA's needs.

Space to play or pause, M to mute, left and right arrows to seek, up and down arrows for volume. Dr Norman Swan discusses the future trajectory of the virus

Every year, a small group of grandparents gather together on the northern side of Sydney Harbour for a camp that honours the grandparenting role in family life. Unlike typical celebrations ... Read more »

Could we see the return of the mask in WA? Premier Mark McGowan has refused to rule out bringing back mandatory mask-wearing after today’s massive surge in COVID cases, according ... Read more »

The New Zealand government says the country will reopen its borders to tourists from all countries by July, allow back cruise ships and make it easier for skilled workers to ... Read more »

Tai Tuivasa is so close to a shot at the UFC's heavyweight title he can almost taste it and he's eyeing a showdown with France's Ciryl Gane in Paris to ... Read more »

Police have dropped charges against a former director of NDIS provider Integrity Care for threatening a key witness in an investigation into the death of Adelaide woman Ann Marie Smith. ... Read more »

Queensland state schools were left scrambling to start online NAPLAN tests on the first day yesterday due to a government-wide internet outage that affected schools.  Key points: Some schools had ... Read more »

Michael Gunner was 20 minutes into his final press conference as Chief Minister on Tuesday when a journalist's question reframed the intrigue surrounding his shock decision to suddenly quit. “Are ... Read more »

Police have charged a 15-year-old girl with assault following an alleged attack at a high school on South Australia's Eyre Peninsula. Police were called to the school just after midday ... Read more »

Do those viral '36 questions' actually lead to finding love?

Tasmanians to be slugged with 3.5pc increase to water bills each year until 2025-26

In another hit to cost of living pressures, Tasmanians' water bills will increase by 3.5 per cent from July this year, and each year for the next four years. Key ... Read more »

The NT Opposition Leader has used her budget reply speech to question the timing of Chief Minister Michael Gunner’s resignation, and attack the financial credentials of the politician acting in ... Read more »

Tarek Zahed, who was shot alongside his brother Omar in a hail of bullets at a Western Sydney gym last night, is one of the country's highest-ranking bikies. Omar, 39, is dead but older ... Read more »

Shanghai has reaffirmed China's strict “zero-COVID” approach to pandemic control, a day after the head of the World Health Organisation said that was not sustainable and urged China to change ... Read more »

A Western Australian council has asked police to shut down an event this weekend at an unauthorised music retreat near Margaret River, as part of an ongoing stoush over loud ... Read more »

The death of a scuba diver during a suspected cocaine operation in Newcastle exposes gaps in port security due to workforce cuts to Australia's frontline border law enforcement agency, the local federal MP ... Read more »

Actor Craig McLachlan has broken down during his defamation trial, revealing he was admitted to a mental health facility after news outlets published allegations he sexually assaulted his colleagues.  McLachlan ... Read more »

Australia has critical minerals for electric vehicles, so isn't it time for a domestic industry?

As governments across the country seek to capitalise on the growing demand for critical minerals and rare earths, experts warn that, without proper investment, Australia could miss out on a ... Read more »

Electronic Arts (EA) is parting ways with world soccer governing body FIFA after a near three-decade partnership, and pulling the plug on one of the world's most successful video-game franchises, which has ... Read more »

South Australia's electricity distributor is “exasperated” by the number of farmers hitting powerlines and electricity poles while sowing crops, with 13 incidents recorded this season already. Key points: There have ... Read more »

Customers have been asked to discontinue use of Nivea and Cancer Council products with specific batch numbers. Live The national consumer watchdog has issued a recall for several batches of ... Read more »

A former elite soldier has rejected accusations in court that he and war veteran Ben Roberts-Smith have “concocted a false story” to cover up the death of a detained Afghan ... Read more »

Western Australia has recorded more than 17,000 new cases of Covid-19 overnight – the highest daily increase in the nation. There were 17,033 new infections overnight, taking the total number ... Read more »

Victorian sex workers and industry advocacy groups say the state's new reforms for the industry are “a win”, but are not a panacea for workers, especially those in regional areas. Key ... Read more »

A group of 17 international delegates has arrived in regional WA for Australia's first premium food and drink trade mission since the pandemic closed borders in March 2020. Key points: Australia has ... Read more »

Josh Frydenberg on track to lose in Kooyong, poll finds

South Australia has recorded a surge in new COVID-19 cases and hospitalisations, and eight people who tested positive have died. Those who died include a man in his sixties, two men ... Read more »

Ex-wife of Shaun Mate, who tried to murder their daughter, tells court of 'harrowing experience'

A court has heard “pride and ego” drove an Adelaide man to try to murder his three-year-old daughter and kill himself, rather than face divorce. Key points: Shaun Preston Mate tried ... Read more »

One of Western Australia's major forestry towns has lost one of its main forms of employment as a timber mill shuts its doors earlier than expected.    Key points: Parkside closes ... Read more »

A magistrate reconsidered and reduced her sentence for a Mount Gambier man who drove more than 100km/hr over the speed limit while escaping police. Key points: The magistrate decided to ... Read more »

Dubbed “WAGatha Christie”, the scandal between British celebrities Coleen Rooney and Rebekah Vardy exploded on social media back in 2019. Now the saga is continuing to unfold publicly, with a ... Read more »

Emergency operators described the shooting scene as ‘horrific’ 10 News First – Disclaimer Live Comanchero bikie boss Tarek Zahed was repeatedly warned he was a target before he and his ... Read more »

Great Barrier Reef bleaching occurred on over 90 per cent of reefs this summer, report reveals

Opposition Leader Anthony Albanese is refusing to guarantee he will formally ask the independent wage umpire to lift the minimum wage by 5.1 per cent, in line with inflation. Key ... Read more »

Former AFL player Héritier Lumumba has defended his decision to release audio of conversations he says he had with people at Collingwood, including former coach Nathan Buckley, in 2014. Key points: Former AFL ... Read more »

WA’s daily COVID tally has exploded to a major new high of more than 17,000 cases, Mark McGowan has revealed. The Premier tweeted that 17,033 cases were detected overnight, taking ... Read more »

Western Australia has recorded 17,033 new cases of COVID-19, representing a 40 per cent jump on yesterday's figures. It brings the total number of active cases in the state to ... Read more »

‘Expect more’: Why Woolworths won’t be the only retailer adopting QR code payments

EU lifts mask requirement for air travel from May 16

Full employment offers a leg up to those at the bottom. Let’s lock it in