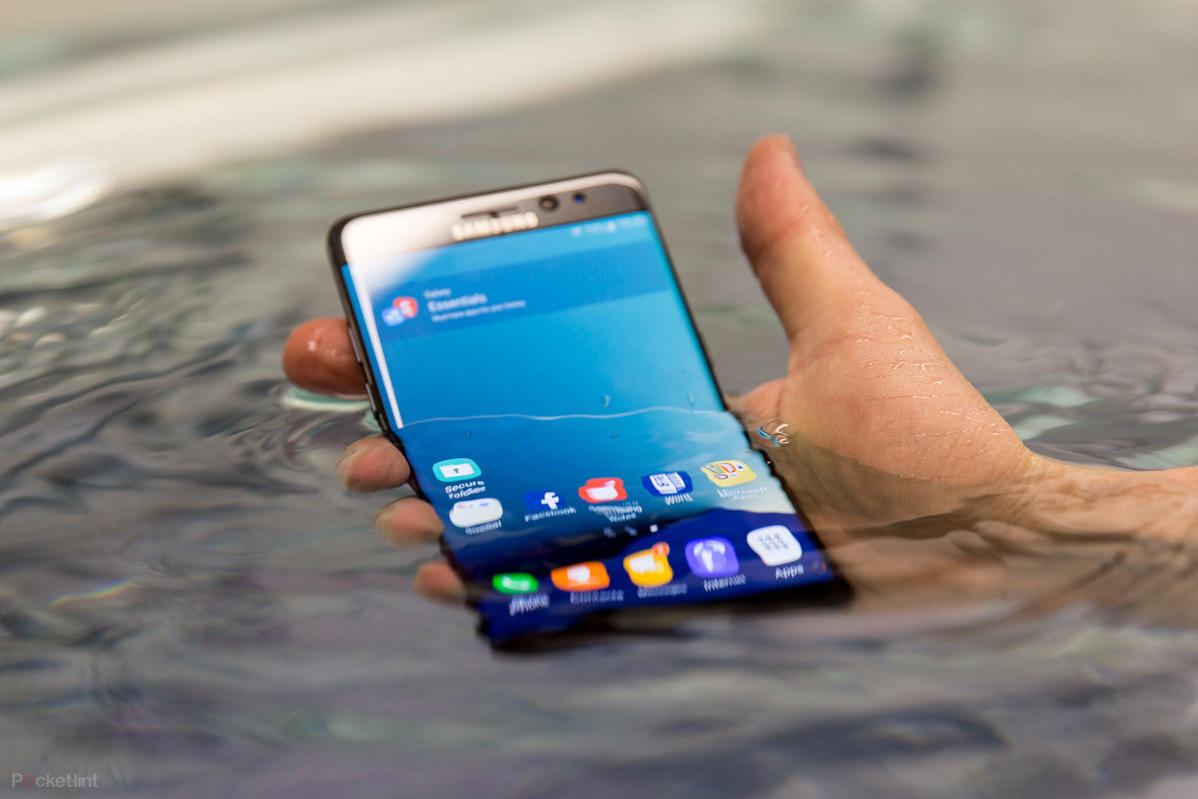 © Provided by Pocket-lint water and dust ip ratings what do they actually mean image 2 (Pocket-lint) – In the smartphone market it’s rare to find a top-of-the-line phone that doesn’t have some kind of water and dust resistance. While it used to be a rarity, it’s now become a lot more commonplace. Even companies that used to stay away from IP-ratings – like OnePlus – have added it to their top devices. In fact many upcoming smartphones for 2021 will likely have some form of protection.  Look at the spec sheet and you’ll likely see something called an IP-rating. These days, that’ll be IP67 or IP68.  But let’s face it, if you’re spending good money on a device, whether it’s an action camera, smart sports watch or a new phone, you need to know it’s going to survive the rain or an accidental trip into a toilet bowl.  With so many different codes, stamps and names for water and dust resistant qualities and certifications, it can be confusing. Let us explain.

IP ratings – what do the letters and numbers stand for?

IP ratings are usually made up of four characters. In some very rare cases there may be five, but you’re unlikely to ever see those on a phone unless Samsung or Apple makes a phone that’s impervious to high pressure jets of hot steam.  The first two characters, I and P, stand for Ingress Protection or – in other words – how good it is at stopping stuff getting inside it. The third digit is the number that indicates how good it is at protecting against small solids (dust/sand etc), with a maximum rating of 6. This ranges from no protection at all, through small screws, a little dust or all dust.  The last digit is the liquid or water resistance rating, with a max rating of 8.  In other words, if you see IP68 somewhere, you know it offers the highest IP rating for both dust and water resistance. At least, when it comes to the IP-rating certification.

What does IP68 mean?

There are a large number of combinations when it comes to IP ratings, and it can get confusing. IP67 devices have the same dust resistance as the IP68-rated Samsung Galaxy S21 Ultra, but can only survive being up to 1 metre deep in water. Any more than that and the water could push through any protection into the internal components of the device. When it comes to solids, devices have been tested against dust and found to be dust tight. Anything with a “6” as the third character is as impervious to dust as can be tested and certified on this particular scale. It’s probably worth noting, just because something is IP68 rated and great at lasting underwater, it may not be tested to withstand rain or spray from a jet of some kind.

What does IP68 mean?

The 8 at the end means the phone has been tested at depths more than 1 metre, and found to be unharmed. While the standard testing doesn’t specifically mention an exact depth, you’ll find manufacturers do list them. For instance, Apple says its IP68-rated iPhone 12 can survive being up to 6 metres deep for up to 30 minutes.

Often times you’ll see products with more than one IP rating, and that’s simply because they’re tested for different kinds of water proofing. For instance, the Sony Xperia Z5 had both IP68 and IP65 rating. As mentioned already, the IP68 rating means it can survive being submerged. IP65 denotes that it’s also good at handling spray. Technically, it’s tested using water being projected by a 6.3mm nozzle. In real world use though, it just means it can survive the rain, or the shower. Just don’t go spraying it with a pressure washer.

If you find an older device with IP53, that means it’s somewhat protected against dust, but not totally, and can live with spraying water, but not jets of water and certainly not being submerged.

What’s with the Apple Watch’s IP6X and WR50 ratings?

Apple Watch Series 7 was announced in September 2021 and – in the announcement – two unfamiliar terms were used to denote how water and dust resistant the latest watches are: IP6X and WR50.

As we’ve already mentioned, the first numerical value is for dust resistance. Like any device with IP68 or IP67, that “6” just means it’s dust resistant to a very high level. Or is “dust tight”. Meaning: no dust can get into the watch. The “X” means it doesn’t have an IP-rating against water, but that doesn’t mean it’s not water-proof.

Apple’s WR50 label means it’s water resistant to 50 metres, and since that’s way above the 1.5m depth that’s certified by the standard IP-rating system, there’s no real need to have it certified. It’s water-tight and you can take it swimming, or out in the rain on a run.

What does IPX7 mean?

The presence of the X in the rating does throw some people, but devices like the first generation Apple Watch, some Garmin cameras and wearables, and even some phones feature it. It means the device hasn’t been certified for protection against dust, but doesn’t mean it isn’t dust resistant.

As with any other rating with 7 at the end, it means the Apple Watch series 1 (as an example) can last up to half an hour in water up to 1 metre deep.

A nano-coating is a microscopically-applied film that’s sprayed over the internal components to help water roll away from anything that could potentially be damaged by moisture.

Some companies like to build their phones with a water repellant nano-coating, but don’t offer a specific IP-rating. With these devices, like the old Moto Z, the phone will probably be fine with accidental spills, light rain or the odd splash, but won’t survive being submerged or when faced with jets of water or heavy rain.

This type of nano-coating has evolved and will offer complete protection from submersion too, without being reliant on seals in the body of the phone.

What does ATM mean?

Although some smartwatches will include an IP rating, you’ll more often than not find water proof capabilities denoted by ATM, at least with watches designed for sports or outdoor activities. ATM stands for atmospheres (nothing to do with cash machines), and basically indicates how much pressure it can take. Or in other words, how deep you can take it under water.

It’s normally reserved for devices designed to be used underwater, and in most cases, 1 ATM is 10 metres, 5 ATM is 50 metres and 10 ATM is 100 metres. With the Apple Watch  for example, that depth is 50 metres, so it can be used to track swimming.

For a break down of each individual possible IP-rating, check out the level-by-level chart on DSMT.com.

Andrew Neil stepped down from GB News over 'differences with board'

Appointment of PM's brother as NAFAS head is above board, says Nazri

EWS quota is a bad law, it needs to go

MADRID (Reuters) – The European Central Bank is not foreseeing an interest hike in the euro zone in 2023, ECB policymaker Pablo Hernandez de Cos said on Friday. © Reuters/Ralph ... Read more »

State pension looks set to rise but 520,000 will miss out

The state pension looks set to rise by 3 percent next year, but more than half a million Britons will miss out. Due to abnormally high average earnings growth figures, ... Read more »

The Dunedin Consort gave a thrilling, visceral performance of Monteverdi’s Vespers at the Lammermuir festival a few years ago. For this year’s appearance, the ensemble returned to the composer, but ... Read more »

© Provided by Football FanCast Rangers-midfielder-Joe-Aribo-Steven-Gerrard-Ibrox-RFC-Gers Rangers kicked off their 2021/22 Europa League group stage campaign with a disappointing loss at home to Ligue 1 side Lyon on Thursday night. ... Read more »

Unusually for a 3-0 defeat, Aston Villa actually put up their best performance of the season in terms of xG at Stamford Bridge last weekend, so much so that The ... Read more »

'Please', 'I like it', 'Cmonnn' - Many LFC fans love James Pearce's early team news for Palace

© Provided by This is Futbol Leeds fans, Elland Road A number of Leeds United fans have reacted online after footage emerged of a goal their Under-21s scored in a ... Read more »

Rafael Benitez has reached the same conclusion as Carlo Ancelotti regarding one area of his Everton squad, and desires a world class January transfer to remedy the situation, per a ... Read more »

Tyson Fury ‘the most talented boxer in the world', sparring partner says

Climate protesters from Insulate Britain have been arrested while attempting to stop traffic on the M25. It's the third time this week the group have targeted the motorway. Read more »

Cabinet ministers will be reviewing the current travel traffic light system and whether to scrap the requirement for foreign travellers to take PCR tests, the Environment Secretary said. George Eustice ... Read more »

Wireless printers are much easier to use and much more versatile – usually with the option to print directly from tablets or smartphones too (iStock/The Independent) While wireless home printers ... Read more »

The Colburn family (Mahria Martin Batts/ Go FundMe) A 15-year-old Texas teenager shot dead his whole family, posted pictures of the bodies online and then killed himself after the police ... Read more »

PPE worth £2.8bn is not fit for purpose, health minister admits

Personal protective equipment (PPE) worth £2.8 billion is not fit for purpose and cannot be used by the NHS, a health minister has revealed. Lord Bethell said 1.9 billion items ... Read more »

At least nine people have drowned in the south of France after swimming in stormy Mediterranean seas. The swimmers entered the choppy waters on difference beaches along the south coast ... Read more »

Next has agreed a deal to run Gap’s business in the UK and Ireland as a franchise partner. However, the move will not spark a return for Gap’s high street ... Read more »

U.S. Speaker Pelosi: Capitalism has not served our economy as well as it could

U.S. House Speaker Nancy Pelosi speaks during an event in London LONDON (Reuters) – Capitalism has not served the U.S. economy as well as it could have, U.S. House of ... Read more »

Climate protesters have blocked the M25 for a third time in a week as the Transport Secretary demanded “swift action” by police to clear the road. Junctions three, at Swanley ... Read more »

© Provided by dw.com Mary Joe Frangieh is one of a group of influencers in Lebanon aiming to promote societal harmony Lebanon has no shortage of thorny issues sparking controversies ... Read more »

© Provided by dw.com The COVID-19 outbreak in Ischgl is considered one of Europe’s earliest “super-spreader” events The first civil trial against Austrian authorities in the ski town of Ischgl ... Read more »

© Provided by City AM Differences over the direction in which channel GB News was heading prompted Andrew Neil to step down as chairman. The journalist and broadcaster, 72, appeared ... Read more »

IPL 2021: How Rajasthan Royals fared in first half of season

What is this 'missing matter' of the Universe that has been found?

© Rivi / Wikipédia The Very Large Telescope is located at the Cerro Paranal Observatory in northern Chile. France’s National Center for Scientific Research (CNRS) has announced that a team ... Read more »

Covid Edinburgh: How many Covid cases are there in Edinburgh and the Lothians?

With the school term and new academic year for freshers in full swing in Edinburgh and its surrounding areas, more of us are starting to feel the effect of more ... Read more »

© Provided by Al Jazeera Libyans chant slogans and demand better public services from the government during a protest at the Martyrs’ Square, Tripoli, Libya on 24 August 2020 [AFP] ... Read more »

One of Disney Plus' biggest problems is finally fixed