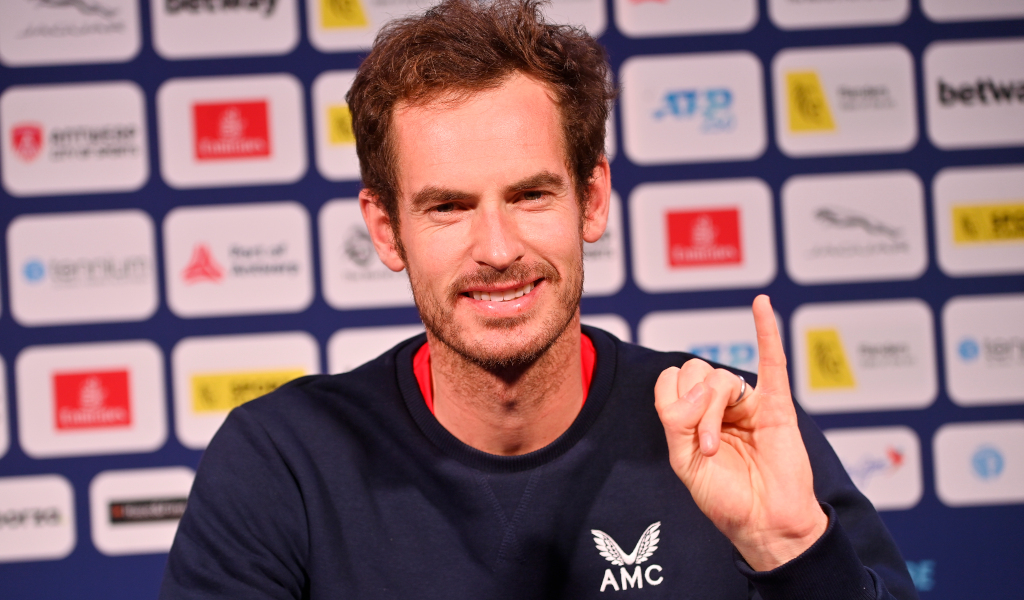 Andy Murray took part in a game of “Get to know Andy Murray” at this week’s Erste Bank Open in Vienna as the former world No 1 gave a bit of insight into his life.

The three-time Grand Slam winner was asked about his favourite Austrian dish to which he answered Sachertorte (a chocolate cake) while he also revealed that fellow Scot Sean Connery would play him in a movie, which didn’t come as a surprise.

As for what is the first thing he does after coming home from a tournament abroad, he revealed that he “gets bossed around by his children”.

Other questions included “What normal job would you like to have if you were not an athlete?” and “What’s your secret guilty pleasure song?”

As for which language he would like to speak, Murray answered: “I would love to speak Spanish because I think if you speak Spanish and English it is brilliant.

“However, I feel like that is very achievable, but one that isn’t is Mandarin.

“I saw Emma Raducanu speaking Mandarin after she won the US Open and I was very jealous of that. Yeah, I’d probably say Mandarin because I don’t think it is something that I would be able to learn whereas Spanish if I dedicated enough time to it, I could probably do it.”

Raducanu, of course, speaks Mandarin as well as Romanian.

© Provided by Teamtalk Sven Botman celebrates with Burak Yilmaz as Lille score against Lyon in April 2021 Manchester United are considering moves for four defenders in January as Ralf ... Read more »

How does Declan Rice compare to N'Golo Kante and Jorginho?

© Provided by Daily Mail MailOnline logo As West Ham sit fourth in the Premier League – and comfortably top of their Europa League group – Declan Rice has been ... Read more »

What channel is Dundee United vs Celtic? Live stream, TV and kick off details for the Premiership clash

There is no room for error from Celtic as they look to avenge back-to-back draws against Dundee United on Sunday at Tannadice. The Parkhead side were held to a 1-1 ... Read more »

© Provided by This is Futbol Martin Dubravka Eddie Howe has had a mixed start to his reign as Newcastle manager, picking up two points from his opening three games. ... Read more »

In a recent interview with Sky Sports, Aston Villa defender Ezri Konsa has outlined his ambitions and hopes to one day play football on the international stage. What Konsa didn’t ... Read more »

Leicester boss Brendan Rodgers believes James Maddison is rediscovering his best form. The 25-year-old endured a difficult start to the season and was benched for six games in September and ... Read more »

LIVERPOOL, Manchester City and Newcastle are set to battle it out for Renato Sanches, according to reports. Spanish publication Fichajes claim FIVE clubs are interested in a move for the ... Read more »

© Provided by 90min Saul was often overrun in midfield | Marc Atkins/GettyImages Chelsea head coach Thomas Tuchel has suggested he may use loanee Saul Niguez out of position as ... Read more »

Aston Villa boss Steven Gerrard has backed Ollie Watkins to return to the England squad. The striker has impressed Gerrard during his short time in charge, scoring two goals in ... Read more »

Heartbreak as 'fit as a fiddle' dad of three dies suddenly

A dad-of-three and lifelong Liverpool FC fan has died suddenly. Chris Mccormick, 52, who worked as an electrician, died of a sudden heart attack on Monday, November 29. According to ... Read more »

‘Don't shop as if you are under siege': how to avoid food waste at Christmas

© Provided by The Guardian Photograph: mauritius images GmbH/Alamy For many people Christmas is about eating and drinking but it is easy to get carried away, not just eating too ... Read more »

© PA Images Nicolo Zaniolo watches the ball come down in the air Tottenham have been linked with two expensive deals as they plan for the next two transfer windows… ... Read more »

Cristiano Ronaldo once said he was the 'first, second and third best player' and made sly digs over Messi's no-show at FIFA Awards... backing claims Argentine 'STOLE' the Ballon d'Or is just the latest swipe in a long rivalry between the superstars

© ES Composite LiverpoolPredictedXISalahv1.jpg Liverpool could be boosted by the returns of Joe Gomez and Naby Keita against Wolves this afternoon. Centre-back Gomez has been out for over a month ... Read more »

© ES Composite ManCityPredictedXIv2.jpg Manchester City have almost a clean bill of health for today’s Premier League clash with Watford. While options were reasonably light for Pep Guardiola in the ... Read more »

West Ham vs Chelsea FC live stream: How can I watch Premier League game on TV in UK today?

© ES Composite PLHow2WatchWestHamChelsea.jpg Fresh from an intense midweek schedule, Chelsea’s trip to West Ham on Saturday lunchtime kicks off a huge weekend in the Premier League. While both sides ... Read more »

© ES Composite PLWolvesLiverpool2122.jpg In-form Liverpool will look to stay amongst the goals as they travel to take on Wolves today. With a ruthless display against Everton, the Reds made ... Read more »

NPA has ‘no intention' of prosecuting murderers of Cradock Four: Foundation

Like it or not Cristiano Ronaldo, Lionel Messi was top dog in for the Ballon d'Or in 2021

Quiz: Has Eoin Doyle ever scored a goal for Bolton Wanderers at each of these 26 stadiums?

Cardiff City v Sheffield United: Team news, Is there a live stream? What time is kick-off?

Ralf can get MUFC firing with “intelligent” £42.3m-rated gem, he has “no weaknesses” - opinion