The agency’s officials were testifying at a House Science, Space, and Technology subcommittee hearing on Wednesday – and called for new weapons to help the US reach Mars before powers such as Russia and China. NASA called on US lawmakers to invest more resources into researching and developing nuclear-powered rockets. They said this would which help humans reach the planet in just three to four months.

This is half the time it would take the usual chemical propelled rockets.

Bhavya Lal, NASA’s senior adviser for Budget and Finance, told the subcommittee meeting: “Our strategic competitors, including China, are indeed aggressively investing in a wide range of space technologies, including nuclear power and propulsion to fulfil their ambitions for sustained human lunar presence, as well as Martian and deep space science missions.

“The United States needs to move at a fast pace to stay competitive and to remain a leader in the global space community.”

This also comes after China allegedly tested a hypersonic nuclear-capable missile which caught US officials off guard. 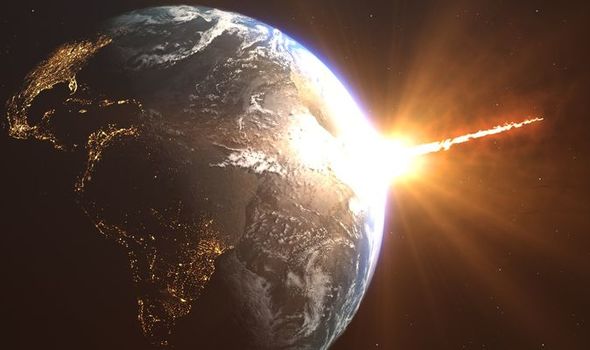 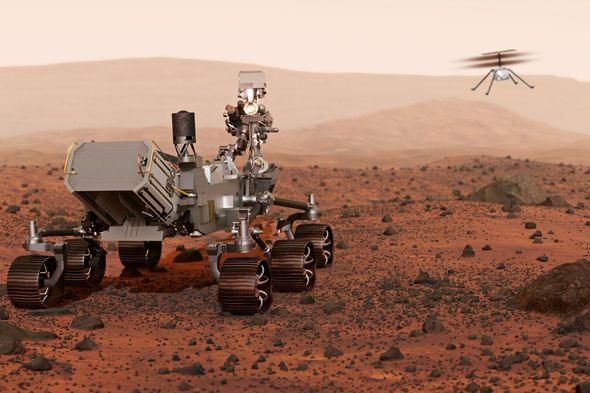 The nuclear-capable rocket is said to have carried a hypersonic glide vehicle that allowed it to travel at a rapid pace.

NASA are now scrambling for the US to boost their space defences as China appears to advancing its space technology at a rapid pace.

Taylor Fravel, an expert on Chinese nuclear weapon policy, told the Financial Times earlier this month that China’s advancement on hypersonic weapons presents a unique threat to US defence. 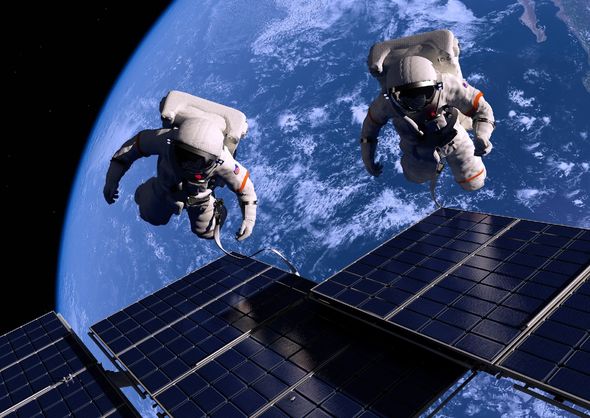 He said: “Hypersonic glide vehicles . . . fly at lower trajectories and can manoeuvre in flight, which makes them hard to track and destroy.”

This means the US system to destroy enemy missiles might not be prepared for incoming attack.

But while the NASA are hoping to ramp up their space defence systems as they prepare to fend off China in the space race, the move would also come at high risk.

A spokesperson for Campaign for Nuclear Disarmament told Express.co.uk: “The idea of using nuclear-power in space is not new and has long been suggested as a way of getting to Mars quickly. 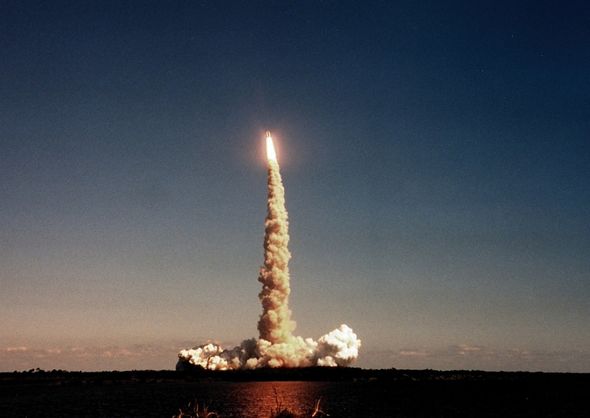 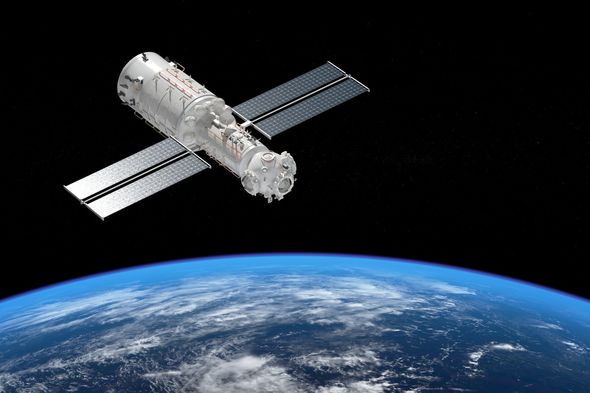 “But the launch into space of a nuclear reactor also risks a catastrophic spread of radioactive material if, for example, the launch vehicle were to malfunction and explode – which would be quite possible if an over competitive rush to space were to occur.

“Nuclear power has also been suggested for other applications, such as powering space weapons and military bases on the Moon and Mars. So, there really needs to be international consideration of the possible applications of nuclear power in space and their desirability. Some of the risks may well outweigh any possible advantages.”

Write honourable: Collection of signatures of all 55 prime ministers to go under the hammer

Road rage killer who knifed dad to death in front of his son, 4, in row over crossing the road is jailed

US congressman to become CEO of Trump social media firm

30 tons of trash removed from Kuta Beach in one day

Russia's Navalny says he has become a 'seamstress' in prison

© Provided by Mirror The sight of young footballers struggling to adjust after being handed huge pay packets is nothing new, but former Manchester City defender Micah Richards has shed ... Read more »

Tell us: have you been left behind in Afghanistan?

Photograph: Ben Shread/AP We would like to hear from people still in Afghanistan who feel they should be in the UK A whistleblower at the UK Foreign Office has revealed ... Read more »

A substitute teacher was given the boot after breaking into a full-blown rendition of a Britney Spears classic in school. At the Bowie High School in Austin, an unidentified teacher ... Read more »

Cagney & Lacey's Sharon Gless: ‘I thought I was gay and hit on Rosie O'Donnell'

Rosie O’Donnell and Sharon Gless are pictured together during the New York Premiere of “All Aboard! Rosie’s Family Cruise” in 2006. WireImage In the kick-ass role of NYPD detective Christine ... Read more »

As many as 35,457 people in Lucknow got inoculated against Covid-19 during the ongoing vaccination drive on Monday. According to a report published in the Times of India (TOI), out ... Read more »

© Provided by DNA Apart from the current Omicron spread fears surrounding the country, a new threat is now looming over schools in Karnataka. Till now, around 130 students from ... Read more »

British Airways has slashed more than than 2,000 flights from its schedule until March. The cutting of flights is down to a reduced demand for air travel thanks to the ... Read more »

© Provided by Hindustan Times Modi made these remarks while addressing the BJP MPs at a parliamentary meeting on Tuesday morning. (ANI) Prime Minister Narendra Modi on Tuesday criticised his ... Read more »

A 75 year old woman travelled 3500 km across UK & paid almost nothing; Here's how

© Provided by Pinkvilla Is there anyone who does not like travelling? There would hardly be anyone who falls in that category. If given a chance many would travel almost ... Read more »

Katrina Kaif, Vicky Kaushal guests get a card upon arrival at wedding venue. This is what it says

The biggest Bollywood wedding will take place on December 9. Katrina Kaif and Vicky Kaushal have left no stone unturned in maintaining secrecy around their relationship, however, we know that ... Read more »

Omicron Scare: Will Delhi impose another lockdown to curb spread? Here's what health minister has to say

© Provided by Jagran English New Delhi | Jagran News Desk: Delhi Health Minister Satyendra Jain on Monday (December 6) said that there was no possibility of a lockdown in Delhi ... Read more »

© Provided by The Indian Express It is finally cold and polluted enough in Noida to test the Dyson Purifier Hot + Cool. While it is not yet that cold ... Read more »

Deepika Padukone’s beautiful and glowing base makeup in Bajirao Mastani floored beauty enthusiasts the moment they laid eyes on her. Luminous yet not oily, her flawless foundation, concealer, blush, and ... Read more »

© Provided by GamePur miHoYo has started accepting applications for Genshin Impact 2.5 beta and you can apply for it till December 9, 2:00 PM UTC. You will be able ... Read more »

Facebook: UNWTO A barangay in Cebu was named as one of the World’s Best Tourism Villages by the United Nations World Tourism Organization. Barangay Bojo in the town of Aloguinsan, ... Read more »

Opinion: Time for the Bank of Canada to make a hard choice

© Provided by Financial Post Bank of Canada building in Ottawa on June 22, 2020. I first heard the gibe that “central bankers think inflation is always and everywhere a ... Read more »

Opinion: Half a century of climate panic hasn't worked. Let's get smarter

Former Southampton midfielder Dusan Tadic has given a glowing recommendation of Erik ten Hag. The Ajax boss is one of the favourites for the full-time manager job at Manchester United, ... Read more »

New UK travel rules are in place due to the Omicron variant of coronavirus, which includes everyone returning to the UK from abroad needing to take a PCR test on ... Read more »

SSE has come under fire from an activist investor over its “lacklustre” plans to tackle the shift to cleaner energy, demanding it consider a broader carve-up and add new directors ... Read more »

Tottenham Hotspur’s plans for a busy period of games have been hurt by a coronavirus outbreak at the club. © PA Images Tottenham Hotspur Stadium on a sunny day A ... Read more »

Ralf Rangnick is a manager who is fascinated by the statistical side of football but you don’t need to dive deep into that world in order to realise his immediate ... Read more »

Arsenal manager Mikel Arteta has defended his decision to bring Eddie Nketiah off the bench in favour of Nicolas Pepe in the 2-1 loss at Everton. © PA Images Mikel ... Read more »

Wales’ health minister has said booster vaccinations will be offered to all eligible adults by the end of January. Eluned Morgan MS confirmed people would still be called in priority ... Read more »

Ralf Rangnick took charge of his first game as interim manager in Sunday's winMan United approached Gerhard Struber over the assistant manager role Struber worked with Rangnick when the pair both held roles at RB SalzburgBut the Austrian has reportedly rejected the offer, choosing to stay at New York Read more »

The number of deaths involving Covid-19 registered in England and Wales has fallen for the second week in a row, with deaths among over-80s at their lowest level for nearly ... Read more »

You've polished off the turkey and waved off the relatives – so what do you do to relax before the New Year festivities begin? We have the solution with our perfect Twixmas* getaways (*the time between Boxing Day and December 31)

'Welcome back to local banking': TSB has shut 411 of 631 branches since that promise - there's a reason why this matters, says SIMON LAMBERT

A Timeline Of Tristan Thompson And Khloe Kardashian's Relationship And Breakup

LIVE: Tens of thousands without power and people warned to stay indoors in Status Red counties