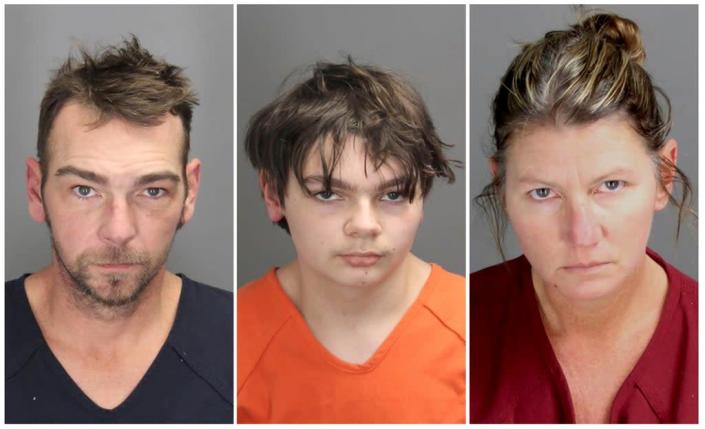 Voices: Prosecuting Ethan Crumbley’s parents over the Oxford school shooting is an admission of failure

After a Michigan high school sophomore shot four people at his school, prosecutors made the unusual decision to charge his parents, James and Jennifer Crumbley, with involuntary manslaughter. The reflexively pro-gun right, epitomized by Fox News’ Laura Ingraham, quickly declared this a politically motivated leftist tactic.

In fact, though, the decision to charge the parents is a depressing admission of failure in the face of right-wing opposition to common sense efforts to reduce gun violence. Thanks to rabid right-wing gun absolutism, gun control advocates have run out of workable tactics. They are left with inadequate carceral approaches that barely pretend to try to reduce violence.

There’s no special mystery to America’s gun violence epidemic. The US has some of the most lenient gun laws in the world, and the highest rates of gun ownership: 120.5 guns per 100 residents. That’s more than twice the rate of the second-highest country, Yemen, with 52.8 guns per 100 people.

As a result, the US has phenomenal rates of gun violence. It has the second-highest number of gun deaths in the world, after Brazil, and the second-highest rate of firearm-related suicide after Greenland. Its rate of violent gun deaths is 12.21 per 100,000 people, outstripping southern neighbor Mexico’s rate of 7.64, and far outstripping northern neighbor Canada’s 2.05.

There are plenty of straightforward solutions to America’s disproportionate and tragic firearms death toll. In 1996, Australia banned numerous rifles and shotguns, required registration of all firearms, and instituted an ambitious buyback program to remove weapons from circulation. Firearm violence fell quickly — firearm suicides, for example, dropped from 2.6 per 100,000 in 1996 to 1.3 per 100,000 in 1998, while homicides fell from 0.4 to 0.3 per 100,000. Rates have continued to fall (in 2013 firearm suicides were 0.72 per 100,000.)

Because of right political opposition, the US has struggled to institute similar reforms at the national level. More, in 2008, a conservative Supreme Court put severe limits on the ability of localities to ban classes of firearms or to even mandate the disassembling of weapons for storage. Some municipalities, struggling to limit gun deaths, had experimented with suing gun manufacturers for selling unsafe products. But that avenue too was closed down by Congress in 2005 with a law that specially prevented lawsuits against gun manufacturers when their products were used in crimes.

Gun suicides, gun homicides, and mass shootings occur with numbing regularity in the US — and the last of those have even been on the rise lately. Right-wing politicians have made sure nothing useful can be done about them. But there’s a huge incentive to try to address the problem. Which leads local prosecutors to try to sue parents like the Crumbleys.

I’ll leave it to experts to weigh in on whether the Crumbleys are legally negligent or not, but one thing is clear: There is evidence that weapon bans and buyback programs can reduce gun violence. There is no evidence that charging parents after mass shootings will do the same.

There isn’t even a reasonable theory as to how charging parents would reduce violence. Parents already have major incentives to prevent their children from committing mass violence — not least that parents themselves are at serious risk if they are living with someone who decides to start shooting those nearby. Will the threat of possible criminal charges make parents suddenly decide their child is a threat? It seems unlikely.

Criminal justice in America generally focuses on punishment rather than on prevention or harm reduction. The right, in particular, is eager to fund prisons and police, and reluctant to fund or promote investments in the social safety net, mental health resources, lead abatement, or expanded healthcare coverage. Their stubborn refusal to countenance restrictions on gun manufacturers or background checks, or even to acknowledge that high rates of gun ownership create a dangerous potential for violence, is of a piece.

In this case, the right’s gun obsession trumps its rage for incarceration. But that oddity shouldn’t eclipse the glum truth that whether or not the Crumbleys are convicted, anyone who cares about reducing gun violence has already lost. Hopefully at some point progressives can gather the political strength needed to put in place gun reforms that will lead to less injury and less death. But charging the Crumbleys isn’t going to do it.

Alexei Navalny says he has 'no regrets' 1 year since arrest

'I had God as my co-pilot': Hero pilot who crash-landed medical helicopter in front of Philadelphia church while transporting sick baby speaks out after being released from hospital: All four people on board survived

BBC Richard Osman's House of Games: Scott Mills on engagement to 4-year partner and how Robbie Williams helped him after his boyfriend died

Scott Mills has graced the airways of Radio 1 for over 2 decades, starting his career at the BBC’s flagship station in 1998. His fun, lighthearted and upbeat presenting style ... Read more »

© Andy JACOBSOHN A sign is displayed outside of the Congregation Beth Israel Synagogue in Colleyville, Texas, some 25 miles (40 kilometers) west of Dallas, on January 16, 2022 The ... Read more »

MEGAN McKenna is living the high life in the Maldives and is currently the envy of her 2.3million Instagram followers. The Towie-star-turned country singer, 29, couldn't stop smiling as she ... Read more »

When Lincoln Riley departed Oklahoma for USC, a massive shockwave went out across the college football world. © Provided by Trojans Wire The news was unexpected, and Riley insisted on ... Read more »

Elizabeth Debicki appeared to be the double of Princess Diana when filming her latest scenes for The Crown The actress, 31, is taking over the role of the late Princess of Wales from Emma Corrin for the fifth series She cut a stylish figure in an oversized military-style jacket and matching black-and-white striped trousers  Read more »

Robin Baucom was killed at the Houston chain she worked at for three decadesShe was trying to let in a co-worker who was being robbed outside, deputies sayA manager, she let her employee in and pushed on the door before she was shotFriends and family held a vigil for her outside the restaurant on SundayDeputies are still searching for a suspect; Surveillance photos were released  Read more »

Ciryl Gane will be chasing greatness when he faces Francis Ngannou in the main event of UFC 270 on Saturday night.  Gane, 31, has an unbeaten record of 10-0 and ... Read more »

THE Chase fans slammed the show as a “fix” after a contestant was given a series of “ridiculous questions” as they went head-to-head with the Chaser. ITV presenter Bradley Walsh, ... Read more »

Treasury writes off £4.3bn in COVID payments stolen by fraudsters

The Treasury figures, which show that a maximum of only 26% will be recovered, were contained in documents quietly published on the HMRC website last week. Photo: Christopher Furlong/Getty The ... Read more »

CALGARY — The Alberta Court of Appeal has upheld the sentence of a man who shot and killed a C-F-L football player outside a Calgary nightclub in 2016.  © Provided ... Read more »

Cast your mind back to the time the Duchess of Cambridge opted for a full pink ensemble, which we couldn’t get enough of then, and still aren’t over now.  On 11 ... Read more »

The world's richest 10 men doubled their fortunes to $1.5 trillion during the pandemic, says Oxfam

Andrew Garfield Lied to Ex Emma Stone About His Involvement in Spider-Man: No Way Home: She 'Kept on Texting Me'

You can earn the Equality avatar in Smite today in honor of Martin Luther King Jr. Day

© Provided by Dot Esports Right now, you can earn a free avatar in Smite in honor of Martin Luther King Jr. Day. Head out to the Battleground of the ... Read more »

Opinion: Why protecting the planet is essential to preventing future pandemics

Almost two years since the start of the Covid-19 pandemic, scientific breakthroughs powered by international collaboration have helped us create vaccines and other treatments that can help tackle the health ... Read more »

The UK’s first museum dedicated to food and cooking will open in rural Suffolk in March. Everything from celebrity chefs and seasonal eating to farming and the history of cheesemaking, ... Read more »

Now’s the time of the year when reality usually hits – coming up with all those resolutions for 2022 was a lot easier than keeping them! Sometimes, all we need is ... Read more »

Perrie Edwards has given fans a behind-the-scenes peek at her stunning pregnancy photoshoot, which took place shortly before her son Axel was born.  The Little Mix star and her Liverpool ... Read more »

The Chicago Bears are in the middle of their search for a new head coach and general manager. And once they land those new hires, there’s a busy offseason ahead. ... Read more »

Delivering a statement to MPs in the Commons, Priti Patel says the government will introduce new legislation to give the security services and agencies the "tools they need to disrupt the full range of state threats". Read more »

Wild Card weekend is now a three-day affair thanks to the NFL’s insatiable need to dominate the news cycle. Tonight the final game of the round will be played between ... Read more »

Manchester United are reportedly keen on making a move for Aston Villa midfielder John McGinn. According to The Telegraph, United have put McGinn ‘s name on a list of potential ... Read more »

© Fiona Hanson GSK was among the strongest on the index (PA) The FTSE 100 struck its latest pandemic high after it was lifted by strong trading in Asia and ... Read more »

Four-day work week pilot launched in UK – how it works and is the pay the same?

We’ve all had that same feeling on a Monday, that the weekend did just not last long enough. Arguments have raged for years over how long the working week should ... Read more »

Danilho Doekhi has laid out his “dream” of playing in the Champions League ahead of a potential move to Rangers. The Ibrox side are interested in the centre-back after he ... Read more »

US airlines are combating the pilot shortage by raising pay, lowering requirements, and hiring from Australia

Prime Minister Narendra Modi‘s message to the world on the first day of the WEF’s online Davos Agenda 2022 summit reflects his commitment to reforms and to become a reliable ... Read more »

© Provided by Hindustan Times Vehicular flyover at Nal Stop chowk on Karve road will be completed in February, (HT PHOTO) PUNE After listing it under priority work, the Maha-Metro ... Read more »

© Provided by Pinkvilla In today’s episode, Priya wonders where did Anjali go. Neeraj comes and tells her that Ram is looking for her. She agrees to go with him ... Read more »

A GRIEVING woman has told how blundering council worker broke into her home before British Gas shut off her electricity after they mixed up her address with her late mum’s. ... Read more »

THE January transfer window is OPEN, and deals are being completed all across Europe! Roberto Martinez, Wayne Rooney and Kasper Hjelmund are among the favourites to take over as manager ... Read more »

Hawaii to require travelers have booster shots to be 'fully vaccinated'

‘Horrendous' murder of woman, 86, may have been burglary, police say

‘Much remains unknown': Tonga still cut off by volcanic eruption

Accused Times Square subway shover should never have been on streets, sister claims

Moto Edge, Moto G, Moto E compared: Which is the best Motorola smartphone for you?

Why falling asleep in front of the TV leaves you tired: Unfamiliar voices heighten your brain activity and stop you getting a restful night's sleep, study finds