Brooks Koepka has been labelled an ‘entitled brat’ following a controversial exchange with Ryder Cup officials during the Saturday foursomes. Koepka and partner Daniel Berger were one down on the par-4 15th in their crucial match with Jon Rahm and Sergio Garcia, when Berger’s drive landed near a drainage pipe just off the fairway.

Koepka, 31, clearly felt he was entitled to relief and a free drop given the awkward lie, and after being told that the position of the pipe did not warrant such a ruling, argued vehemently with match referee David Price and then European Tour official David Litton.

“Have you ever seen me hit a ball?” Koepka asked, after Price dismissed his claim he would not be able to execute a full golf swing.

Four-time major winner Koepka is returning from a wrist injury sustained at the season-finale Tour Championship this month, and even tried to use that to bolster his argument: “If I break my wrist, it’s on ******* both of you,” he ranted.

His behaviour drew criticism from the Sky Sports Golf commentary team, who felt that Koepka needed to take a penalty drop if he did not feel his wrist was up to sustaining the impact of a difficult shot from the rough. 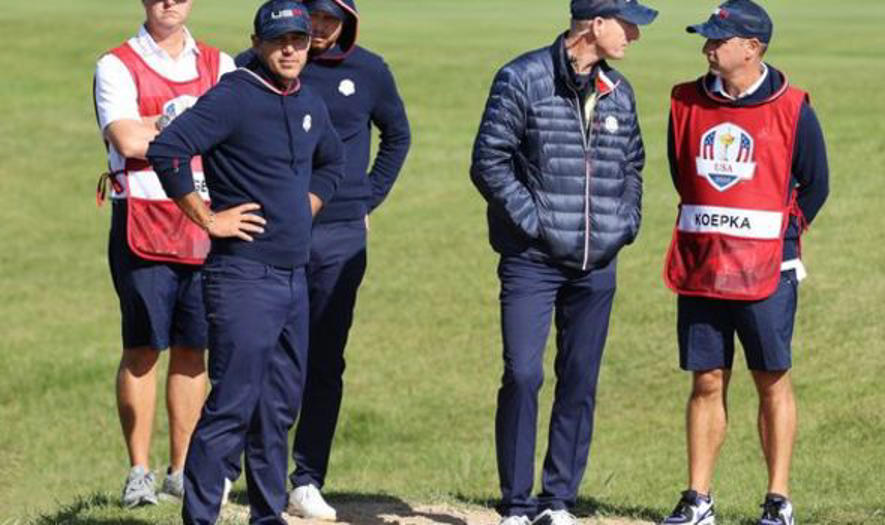 Opponent Garcia however, saw the funny side, appearing to spit out his drink as he laughed at Koepka’s belligerence.

Ironically, the US star then produced a stunning 200-yard shot to find the green and secure a half – although it mattered little as Spaniards Rahm and Garcia wrapped things up in the two holes that followed to prevail 3&1.

However, Koepka’s antics drew scathing criticism from golf fans, with @yabbadabba221 tweeting: “Koepka/Berger trying to bully #RyderCup2021 officials over a ruling dispute was not a good look. Acting like two entitled brats.”

@SportsPaulH argued the pair should be forced to apologise: “It’s the lack of respect Koepka and Berger had when speaking to referee David Price that I found especially bad, and Price knows what he’s doing. Those two acted like a couple of punks and I hope they’re made to apologise.”DON’T MISS:

The outcry continued with @BrianSw79975558 saying: “The hassle and threats that Koepka and Berger have just subjected two referees to is totally unacceptable. The ball was clearly playable poor behaviour from the American team.

“The ball was clearly playable, poor behaviour from the American team.”

Sky News Business correspondent Paul Kelso added: “Charmless Koepka and Berger told by two referees, (one US, one Brit) they can’t have a drop and still in their ears. Berger’s parting shot “that’s bull**t”. Exactly the sort of aggro Europe need (and Garcia didn’t need to say a word).”

Whilst European fans would have been left satisfied by the American duo going on to lose their match though, their side has a mountain to climb to retain the Ryder Cup. 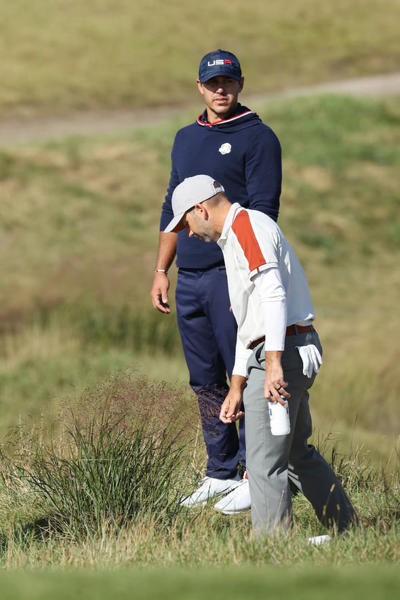 For the third successive session, Steve Stricker’s side won 3-1, meaning they now have 9-3 lead overall – their biggest ever at this stage of the competition since the European team was formed for the 1979 competition.

It means the hosts now just need 4.5 points from the remaining 16 on offer to regain the trophy they lost in Paris in 2018.

The Saturday fourballs take place tonight ahead of the 12 singles’ matches on Sunday.

Trump Being Subpoenaed to Testify Before Jan. 6 Committee 'Not Far-Fetched': Rep. Plaskett

The Redcliffe Dolphins' fairytale journey to the NRL

New York real estate heir Robert Durst has tested positive for Covid-19 and is currently connected to a ventilator, his attorney said. © Provided by NBC News “All we know ... Read more »

Car belonging to missing Ohio family has been recovered

The car belonging to a young Ohio mother who, along with her children, disappeared in 2002, has been recovered, reigniting the cold case. The vehicle in which Stephanie Van Nguyen, ... Read more »

Ski season is here: Wolf Creek first US ski resort to open for 2021-22

Detectives have been given more time to hold a man on suspicion of murdering Conservative MP Sir David Amess. A warrant of further detention granted at Westminster Magistrates’ Court allows ... Read more »

There have been at least two dozen lawsuits filed around the U.S. demanding hospitals give ivermectin, a deworming drug, to COVID-19 patients, The Associated Press reported. © istock Dozens of ... Read more »

WILLIE WALSH: We're all sick to death of Zoom

© Provided by Daily Mail MailOnline logo The travel restrictions caused by the pandemic have had a catastrophic impact on our ability to connect with families, friends, or for business.  ... Read more »

Cardiff head coach Dai Young has played down fears over Ellis Jenkins’ fitness after the openside was replaced 20 minutes into their United Rugby Championship win over the Sharks on ... Read more »

© Cobra Team / BACKGRID Beyoncé and JAY-Z know how to always keep it classy and chic. The couple was one stylish pair as they attended a wedding in Venice, ... Read more »

A key climate policy designed to phase out fossil fuels will likely be cut from Democrats’ upcoming reconciliation package due to opposition from Sen. Joe Manchin (D-WV), who has reportedly ... Read more »

Chelsea scrape past Brentford thanks to Ballon d'Or-backed Mendy

LOS ANGELES (AP) — Warner Bros. has unveiled its trailer for “The Batman,” which features Robert Pattinson’s first bone-crunching turn as a DC Comics superhero. © Provided by The Canadian ... Read more »

© Provided by This Is Money MailOnline logo Another tumultuous week of corporate handbags at GlaxoSmithKline, with the pharma giant unveiling plans for a new HQ while activist investor Bluebell ... Read more »

© Provided by This Is Money MailOnline logo The cost of renting a car has soared by almost 40 per cent after a global microchip shortage squeezed the supply of ... Read more »

Hits and misses: Mo's world but Ole has issues

India & US kick off military drill ‘Yudh Abhyas' in Alaska

© Provided by The Times of India NEW DELHI: India and the US have kicked off their ‘Yudh Abhyas’ military exercise in the snow-clad mountains of Alaska, with over 300 ... Read more »

Every region in India is ‘mainland': Shah in Port Blair

© Provided by The Times of India NEW DELHI: Home minister Amit Shah on Saturday said “yehi mainland hai”, in the context of descriptions like “northeast and mainland” or “Andamans ... Read more »

‘No one helped… he (accused) looked like my son's age': Govt officer dragged on road by snatchers in South Delhi

© Provided by The Indian Express A senior government officer travelling with her minor son suffered injuries after two men on a scooter snatched her bag and dragged her on ... Read more »

© Provided by This Is Money MailOnline logo Investment trust Odyssean has not had the easiest of starts. Launched in May 2018 to make money from investing in some of ... Read more »

© Provided by This Is Money MailOnline logo Boohoo has opened a manufacturing office in Turkey that will circumvent bottlenecks choking supplies of clothing from the Far East.  The Istanbul ... Read more »

© Provided by This Is Money MailOnline logo Car dealer Vertu Motors has been slammed for retaining furlough cash despite plans to pay dividends to shareholders.  The firm, whose brands ... Read more »

© Provided by This Is Money MailOnline logo Our campaign to ensure retail investors are able to buy shares in companies ahead of their listing on the UK stock market ... Read more »

© Provided by This Is Money MailOnline logo With hefty tax rises already scheduled for spring next year, it is unlikely that Rishi Sunak’s Budget in ten days’ time will ... Read more »

Finidi George began his coaching career on a winning note as Enyimba picked up a 1-0 away win over Diambars FC in Saturday’s Caf Confederation fixture. The 50-year-old was named ... Read more »

(Reuters) – AC Milan produced a superb second half fightback from two goals down to beat Hellas Verona 3-2 at San Siro on Saturday and go top of the Serie ... Read more »

© Reuters/POOL Robert Durst appears in court as he was sentenced to life without possibility of parole for the killing of Susan Berman, in Los Angeles (Reuters) – Real estate ... Read more »

© Provided by Associated Press In this undated photo provided by the Louisiana State Police, Master Trooper Adam Gaubert poses for a picture. Gaubert was shot to death in an ... Read more »

Crowds of protesters marched the streets of San Juan, Puerto Rico, on Friday, October 15, to demand the expulsion of power company Luma amid a continued lack of electricity across ... Read more »

Thousands of Puerto Ricans on Friday marched to protest against ongoing power outages across the island, AP reports. Driving the news: Many of the approximately 4,000 protesters called for the ... Read more »

STRICTLY Come Dancing star Ugo Monye took a week out from the BBC dancing competition as Sara topped the leaderboard – and Katya and Adam raised eyebrows with their 'chemistry' ... Read more »

Suspect in deadly I-70 truck crash convicted on most serious counts, including vehicular homicide

Thousands missing out on richer retirement due to lack of advice

Pakistan NSA among invitees for India's own conference on Afghanistan

The £2.7bn reason Chancellor will not reform inheritance tax

Heathrow's price hikes 'could put £100 on price of family break'

The best teams in Hearthstone Mercenaries

MPs back challenge to Boris Johnson on vaccine passports