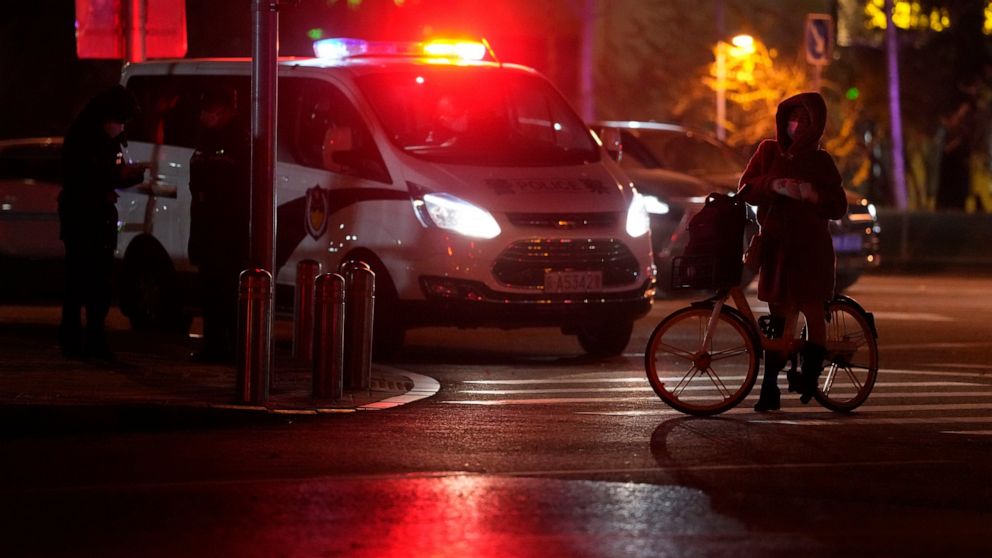 A passerby on a bicycle stops near a police van monitoring an area where protesters were expected to gather in Beijing, Monday, Nov. 28, 2022. Chinese authorities eased some anti-virus rules but affirmed their severe “zero COVID” strategy Monday after protesters demanded President Xi Jinping resign in the biggest show of opposition to the ruling Communist Party in decades. (AP Photo/Ng Han Guan) The Associated Press

BEIJING — Chinese universities sent students home and police fanned out in Beijing and Shanghai to prevent more protests Tuesday after crowds angered by severe anti-virus restrictions called for leader Xi Jinping to resign in the biggest show of public dissent in decades.

Authorities have eased some controls after demonstrations in at least eight mainland cities and Hong Kong — but showed no sign of backing off their larger “zero-COVID” strategy that has confined millions of people to their homes for months at a time. Security forces have detained an unknown number of people and stepped up surveillance.

With police out in force, there was no word of protests Tuesday in Beijing, Shanghai or other major cities that saw crowds gather over the weekend. Those widespread demonstrations were unprecedented since the army crushed the 1989 student-led pro-democracy movement centered on Beijing’s Tiananmen Square.

Tsinghua University, where students rallied, and other schools in Beijing and the southern province of Guangdong said they were protecting students from COVID-19 by sending them home.

But dispersing them to far-flung hometowns also reduces the likelihood of more demonstrations. Chinese leaders are especially wary of universities, which have been hotbeds of activism including the Tiananmen protests.

On Sunday, Tsinghua students were told they could go home early for the semester and that the school would arrange buses to take them to the train station or airport.

Nine student dorms at Tsinghua were closed Monday after some students positive for COVID-19, according to one who noted the closure would make it hard for crowds to gather. The student gave only his surname, Chen, for fear of retribution from authorities.

Beijing Forestry University also said it would arrange for students to return home. It said its faculty and students all tested negative for the virus.

Universities said classes and final exams would be conducted online.

Authorities hope to “defuse the situation” by clearing out campuses, said Dali Yang, an expert on Chinese politics at the University of Chicago.

Depending on how tough a position the government takes, protests could continue on a “rotational” basis, with new groups taking turns, he said.

But many people are nervous after police detained some protesters and warned them against demonstrating again.

In Shanghai, police stopped pedestrians and checked their phones Monday night, according to a witness, possibly looking for apps such as Twitter that are banned in China or images of protests. The witness, who insisted on anonymity for fear of arrest, said he was on his way to a protest but found no crowd there when he arrived.

Images viewed by The Associated Press of photos from a weekend protest showed police shoving the people into their cars. Some people were also swept up in police raids after demonstrations ended.

One such person, who lived near the site of a protest in Shanghai, was detained Sunday and held until Tuesday morning, according to two friends who also insisted on anonymity for fear of retribution from authorities.

One friend said the person was questioned about the protest but wasn’t hit or physically abused.

In Beijing, police on Monday visited a resident who attended a protest the previous night, according to a friend who refused to be identified for fear of retaliation. He said the police questioned the resident and warned him not to go more protests.

China's “zero-COVID” policy has helped keep case numbers lower than those of the United States and other major countries. But public tolerance of the onerous restrictions has eroded as people in some areas have been confined at home for up to four months and said they struggled to get access to food and medicine.

The Chinese Communist Party promised last month to reduce disruption by changing quarantine and other rules. But a spike in infections has prompted cities to tighten controls, fueling public frustration.

The protests over the weekend were sparked by anger over the deaths of at least 10 people in a fire in China's far west last week that prompted angry questions online about whether firefighters or victims trying to escape were blocked by anti-virus controls.

Most protesters over the weekend complained about excessive restrictions, but some turned their anger at Xi, China’s most powerful leader since at least the 1980s.

In a video that was verified by The Associated Press, a crowd in Shanghai on Saturday chanted, “Xi Jinping! Step down! CCP! Step down!” Such direct criticism of Xi is unprecedented.

While some anti-virus restrictions were eased Monday in a possible effort to defuse public anger, authorities are believed to fear a wave of infections and deaths that could overwhelm the health care system should they lift the measures further.

China’s numbers remain low in comparison to the U.S. and other countries, but few Chinese have been exposed to the virus. Elderly vaccination rates lag other countries as seniors decline the jabs, and China’s domestically developed vaccines are less effective than those used abroad.

Sympathy protests were held overseas, and foreign governments have called on Beijing for restraint.

Asked about the protests at a Monday briefing, White House National Security Council spokesperson John Kirby said that “obviously, there are people in China that have concerns about that,” referring to lockdowns.

“These protesters are speaking for themselves,” Kirby said. “What we are doing is making it clear that we support the right of peaceful protest.”

Asked about criticism of the crackdown, a Foreign Ministry spokesman defended Beijing’s anti-virus strategy and said the public’s legal rights were protected by law.

The government is trying to “provide maximum protection to people’s lives and health while minimizing the COVID impact on social and economic development,” said Zhao Lijian.

Wang Dan, a former student leader of the 1989 demonstrations who now lives in exile, called the protests “an important harbinger for Xi Jinping’s third term in power. It means that he will encounter many challenges in the next five years.”

“This protest symbolizes the beginning of a new era in China … in which Chinese civil society has decided not to be silent and to confront tyranny,” Wang said at a Taipei news conference, warning that the authorities were likely to respond with “stronger force to violently suppress protesters.” ———

Barrett Strong, one of Motown's founding artists and known for 'Money,' dies at 81

Death Knell For California's Once Promising Cannabis Industry? Why Jerry Garcia's Weed Brand Is Pulling Out

Netflix's Best and Worst of February 2023: 5 Must-See Movies and 2 Disappointments

'You just can’t have it': Bengals lament worst mistake at worst time vs. Chiefs

KANSAS CITY, Mo. — Whatever could go wrong for the Cincinnati Bengals in the final minute of the AFC championship game, did go wrong. Joe Burrow was flagged for intentional ... Read more »

'Know your role and shut your mouth': Travis Kelce calls out Cincinnati mayor after win

Man trying to stop auto burglary in St. Paul shot in both feet

The side of a St. Paul Police Department squad car seen April 17, 2017. A St. Paul man trying to stop people breaking into a vehicle was shot in both ... Read more »

‘Blink Twice if You Need Help, Senator!’ MSNBC’s Ayman Mocks Lindsey Graham Being All-In for Trump 2024 Despite Previously Disavowing Him

Did officials give Kansas City a fourth-quarter do-over in AFC Championship game?

Paul McCartney claims John Lennon was excited to tell him he was leaving The Beatles for good. It was not a good time for the songwriting partners. John Lennon and ... Read more »

John Finn: The First Person to Receive the Medal of Honor During World War II

For the United States, the first day of the Second World War came on December 7, 1941 with the Japanese attack on Pearl Harbor. During the assault, sixteen acts of ... Read more »

The home is complete with a “lovely” front garden, which the tenant wants to rip out. (Getty generic image) A mum is frustrated with a tenant who wants to rip ... Read more »

Sarah Waters, 31, from Prescot, who was diagnosed with cervical cancer following a smear test A woman returned from a holiday in Spain to find “urgent letters” from the NHS ... Read more »

New Zealand city to get more dangerous rainfall after flood

Phil Jones has given Manchester United a simple decision to make

Jones has played just 13 times in the past two-and-a-half seasons Phil Jones has become the forgotten man of Old Trafford – Manchester United fans can be forgiven for believing ... Read more »

10 Best Post-Apocalyptic Movies To Watch After The Last Of Us Audiences have welcomed The Last of Us with open arms. For fans of the video game or those jumping ... Read more »

All states allow certain passengers to ride in the beds of pickup trucks–in certain situations. Twenty states have no law limiting riding in the bed of a pickup truck. Other ... Read more »

Cuddly ducks for prizes in a crane grabber machine Although visiting an arcade can be great fun, most people know all too well how difficult it can be to win ... Read more »

Hollywood has given us some far-fetched plots over the years. And if you want to actually enjoy a movie, you need to suspend your disbelief to a certain degree. CBS ... Read more »

Insider hints there could be potential Derek Carr news soon

Biggest day of strikes in a decade will see up to 500,000 teachers, train drivers and civil servants walk out

'People don't realize how hurt he was': Patrick Mahomes battles through injury to put Chiefs in SB

Unlike its larger American peers, TikTok hasn’t faced the kinds of mega fines or legal penalties that Google, Facebook-owner Meta or Amazon have in the EU over the years. TikTok ... Read more »

How Test cricketer Stuart MacGill allegedly screamed 'you're going down' at his best mate's ex-girlfriend extraordinary foul-mouthed spray: 'His face was red, his pupils were scary'

Holly Newton: Boy, 16, to appear in court charged with murder of 15-year-old girl

The boy has also been charged with the attempted murder of another boy, also 16, and possession of an offensive weapon, following the incident in Hexham, Northumberland. Read more »

Video: Inside the 'ridiculously stupid' trend tourists are embracing in Bali to 'build immunity' to Bali Belly

LIVE – Updated at 04:19 One of the three suspects arrested for the alleged rape of Louisiana State University student Madison Brooks is facing a separate charge of first-degree rape ... Read more »

TransPennine Express train on a platform with a passenger boarding – Phil Oldham/PinPep A train operator that runs some of Britain’s worst-performing services is facing calls to halt a programme ... Read more »

This month, ITV put an official call out that they were looking for single parents across the UK who are on the lookout for love. After admitting she pitched the ... Read more »

Today show’s Karl Stefanovic took a cheeky dig at his former co-host Ally Langdon ahead of her debut on A Current Affair on Monday night. Karl and new co-host Sarah ... Read more »

Scots should brace themselves for blustery conditions as 80mph are set to blow across the country next week. The Met Office have issued a yellow wind warning for the whole ... Read more »

Aberdeen pulled the trigger on Jim Goodwin after another humiliating 90 minutes against Hibs. And Willie Collum was in the firing line with Hotline callers for what they reckon was ... Read more »

North Korea Lifts Lockdown in Capital Due to Outbreak

Loose Woman legend gets her first tattoo to mark turning 60

Is there hope for a dying river in Kenya's growing capital?

Survivors of conflict to meet Pope Francis in Congo

February is LGBTQ+ history month: here are 10 of the best places to celebrate it