The Taliban will announce a framework that allows girls to attend school in Afghanistan “soon,” a senior United Nations official said, after four weeks in which Afghan boys have been allowed a secondary education but girls have not. 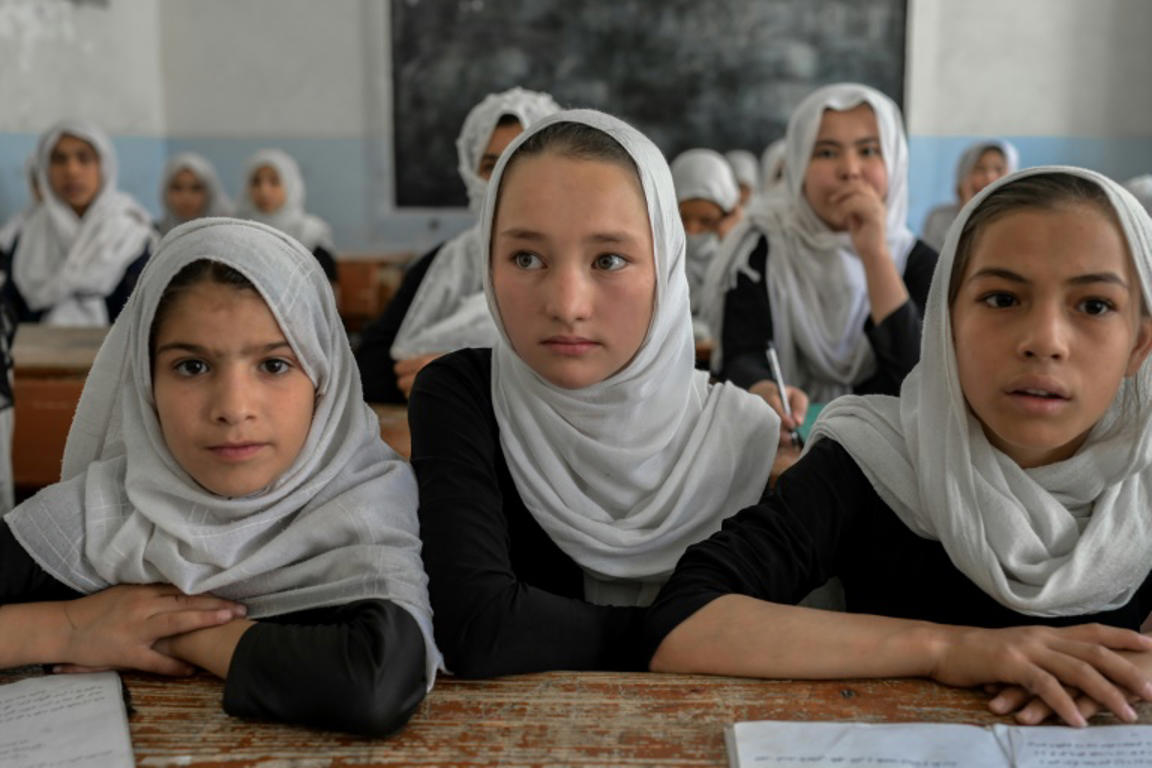 © BULENT KILIC A senior UN official said the Taliban will ‘soon’ announce a plan to allow Afghan girls to attend secondary school, after earlier permitting girls like these, seen in Kandahar on September 26, 2021, to attend primary school

“The de facto minister of education told us that they are working on a framework, which they will announce soon, that will allow all girls to go to secondary school, and we are expecting that to happen very soon,” UNICEF deputy executive director Omar Abdi said at the United Nations in New York on Friday.

For weeks now the Taliban have been saying that they will allow girls to return to school as soon as possible.

The Islamist group, notorious for its brutal and oppressive rule from 1996 to 2001, has faced international fury after effectively excluding women and girls from schools and work across the country, while incrementally stripping away Afghans’ freedoms.

The Taliban permitted girls to attend primary school from the start, but have maintained that neither the girls nor their female teachers could return to secondary school yet.

Taliban officials have said that can happen only once the girls’ security and strict gender segregation can be ensured under the group’s restrictive interpretation of sharia law, adding that more time is needed to put this framework in place.

Abdi noted that, as he spoke, “millions of girls of secondary school age are missing out on education for the 27th consecutive day.”

He said the UN has urged the Taliban authorities now governing Afghanistan “not to wait” on educating girls.

Abdi said he had visited Afghanistan the week before and met with Taliban authorities.

“In all my meetings, the education of girls was the first issue that I raised.”

He said he had received “affirmations” of the Taliban’s commitments to allow girls to attend primary school.

As for secondary school, he said they were allowed “only in five provinces,” but added that the UN is pushing for the right to be implemented throughout the country.

A 14-year-old girl identified as Asma this week expressed both her frustration with the situation and her determination to pursue an education.

“Will I be able to go to school or not? This is my biggest concern. I want to learn everything, from the easiest to the hardest subjects. I want to be an astronaut, or an engineer or architect… This is my dream,” she told Amnesty International.

“Education is not a crime,” she added. “If the Taliban announce that getting an education is a crime, then we will commit this crime. We will not give up.”

Today in History for December 2nd

Omicron is spreading: Officials confirmed the first case in the United States on Wednesday. Yet there are also signs it may not be as harmful as some feared. Which means ... Read more »

The most telling moment in Wednesday’s virtual introduction of Max the Met came at a time you wouldn’t expect. It confirmed for the public record that Steve Cohen, after a ... Read more »

Debt collectors OK'd to use social media to reach borrowers

A 3-year-old girl who died on Wednesday at a hospital was accidentally shot in the Stockyards area in Fort Worth, authorities said. Cassity Jackson died in the Cook Children’s Medical ... Read more »

On today’s What America’s Thinking, a new Hill-HarrisX poll reveals 62 percent of voters are concerned about the Omicron variant. Read more »

UPDATE: A federal judge sentenced Dickson on Nov. 29, 2021, to 32 years in prison. A Louisville man was arrested Thursday after he allegedly pretended to be an 11-year-old on ... Read more »

© Reuters/ALY SONG People walk along at financial district of Lujiazui in Shanghai SHANGHAI (Reuters) – A European business group said on Thursday that technical standards were a “new battleground” ... Read more »

© BBC To his listeners, William Neil “Doc” Gallagher was known as the “Money Doctor” – a charming financial guru who advertised his services on Christian radio, broadcast all over ... Read more »

© Provided by Daily Mail MailOnline logo She’s known for showcasing her incredible sense of style both on and off the red carpet.  And Jenna Coleman made a statement when she ... Read more »

© Provided by US Weekly Why Kim Cattrall Was Never Included SATC Revival For those Sex and the City fans wondering how Carrie, Miranda and Charlotte could go on without ... Read more »

Instagram CEO to testify before Congress for the first time

Singapore-Australia VTL: 8 unique things to do in Australia if you are planning a trip

From Square to Block: Another tech company changes its name

Inside the Biden White House's thorny response to the Omicron variant