The United Nations humanitarian agency is warning that 5.7 million flood survivors in Pakistan will face a food crisis in the next three months 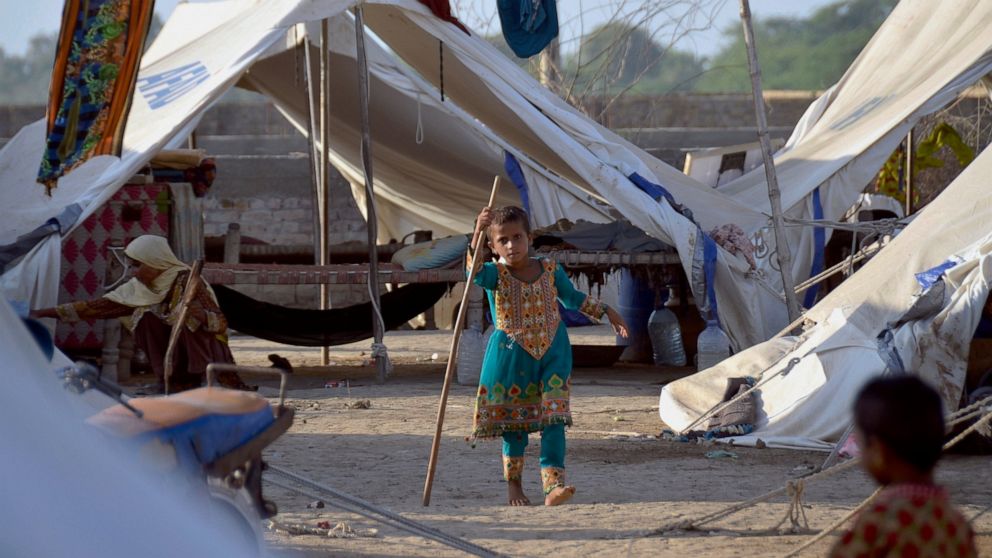 A young girl plays outside her tent at a relief camp, in Jaffarabad, a district in the southwestern Baluchistan province, Pakistan, Thursday, Sept. 29, 2022. Almost 3 million children in Pakistan may miss at least one semester because of flood damage to schools, officials said Thursday, following heavy monsoon rains likely worsened by climate change. (AP Photo/Zahid Hussain) The Associated Press

ISLAMABAD — The United Nations humanitarian agency is warning that about 5.7 million Pakistani flood survivors will face a serious food crisis in the next three months, as the death toll from the deluge rose on Monday.

The U.N. Office for the Coordination of Humanitarian Affairs in its latest report Saturday said the current floods are expected to exacerbate food insecurity in Pakistan and said 5.7 million people in flood-affected areas will be facing a food crisis between September and November.

Even before the floods, according to the World Health Organization, 16% of the population was living in moderate or severe food insecurity.

However, Pakistan's government insists that there is no immediate worry about food supplies, as wheat stocks are enough to last through the next harvest and that the government is importing more.

The U.N. agency said in a tweet on Monday that the agency and other partners have scaled up their flood response and delivered aid to 1.6 million people directly affected by the deluges.

OCHA said outbreaks of waterborne and other diseases are on the rise in Sindh and southwestern Baluchistan provinces, where floods have caused the most damage since mid-June.

Several countries and U.N. agencies have sent more than 131 flights carrying aid for survivors, but many are complaining they have either received too little help or are still waiting for it.

The U.N. humanitarian agency also said in its Saturday report that rainfall in Baluchistan and Sindh lightened substantially over the past week, as temperatures start to decrease ahead of winter.

“Normal conditions are prevailing in most districts of Baluchistan, while in Sindh, the Indus River is flowing normally,” said OCHA. Overall, it added, in 18 out of 22 districts of Sindh, floodwater levels had receded at least 34%, and in some districts up to 78%.

The OCHA report also highlighted the ordeal of flood survivors, saying many continue to live in “unsanitary conditions in temporary shelters, often with limited access to basic services, compounding the risk of a major public health crisis.”

“Already before the floods, Pakistan had one of the highest maternal mortality rates in Asia, with the situation likely to deteriorate,” it said.

The U.N. is due to issue a revised appeal seeking an additional $800 million from the international community to respond to the soaring life-saving needs of Pakistani flood survivors. The U.N. said last week that “food is being delivered to vulnerable families; however, it is still not enough to meet the nutrition needs of the people.”

Pakistan says floods caused about $30 billion of damage to its economy.

Pakistan Railways said it has started restoring train service from Sindh to other cities after repairing some of the tracks damaged by floods.

Jason Momoa Is Filming His New Show In Hawaii, But Some Locals Aren't Happy About It

This Growth Stock Is a Screaming Bargain for 2023

Cameron Smith could have had a shot at the world number one ranking at this week's Australian Open, but isn't losing any sleep over being robbed of the opportunity. Read more »

Op-Ed: No matter how the Heard/Depp trial ends, defamation lawsuits against accusers are here to stay

After weeks of testimony in a Virginia courtroom, the much-watched defamation trial of Johnny Depp’s claim against Amber Heard is nearing its end. At the heart of the case is ... Read more »

Israeli filmmaker comments on Kashmir film stoke controversy Israel’s envoy to India has denounced a filmmaker from his country after he called a blockbuster Bollywood film on disputed Kashmir a ... Read more »

SINGAPORE – Five-year-old Renee Hairiyanto saw a blind man get into an accident when he could not hear the beeping sound of a traffic light due to road noise. In ... Read more »

Nov. 28—At the coziest restaurant in Pierce County, you can make new friends around a fire pit, roasting marshmallows with a s’mores kit, and sip cider under a pavilion by ... Read more »

Kolo Toure has been signed as the new manager of Sky Bet Championship club Wigan on a three-and-a-half-year contract. Read more »

Trusts and wills aren’t the same thing. Here’s how they work

Dear Liz: I understand what happens with a living trust when both spouses die at once. But what happens when just one dies? Is the trust tossed out, since the ... Read more »

Trump's special master 'seems to be running out of patience': former federal prosecutor

Donald Trump holds a press conference at Trump Turnberry. (Shutterstock.com) Donald Trump and his legal team hand-picked the special master that they wanted to be appointed to review all of ... Read more »

Qatar became the first host nation in World Cup history to lose the opening match, and then only the second host to be eliminated from the group stage. AP The gilded stadiums ... Read more »

Pakistan is preparing a counterterrorism offensive amid an expected massive wave of violence after the country’s Taliban movement called off a shaky six-month ceasefire and ordered its militants to launch ... Read more »

Fan of bowl dining? Well it turns out you’re not alone as Habitat revealed in its latest trend report that more and more people are ditching plates for bowl dining ... Read more »

Qatar has agreed to supply Germany with liquefied natural gas (LNG) under a long-term deal that will go a small way to helping the European country replace piped flows from ... Read more »

Dogecoin, the world’s most popular meme coin, is still beating the odds in the largely sideways cryptocurrency market. Read more »

A curious kitten has made a miraculous recovery after surviving a 50 foot fall from a fourth storey flat. Oreo the one-year-old proved that cats really do have nine lives ... Read more »

Dwayne Johnson: what did The Rock say about Henry Cavill returning as Superman in Black Adam movie?

Controversial measures that would have forced to take down material designated “legal but harmful” have been axed from the . Critics of the section in the bill claimed it posed ... Read more »

What a difference a year makes. Last year, growth stocks were the primary reason the major U.S. stock indexes pushed to all-time highs. In 2022, these same growth stocks are ... Read more »

15 Richest Women in the World, Ranked by Net Worth

15 Richest Women in the World, Ranked by Net Worth Ever wondered who the wealthiest woman in the world is? We often read about Bill Gates, Elon Musk, and others ... Read more »

Downtown Utica is in the midst of a mural renaissance

SINGAPORE – Parliament on Tuesday voted to repeal a decades-old law criminalising gay sex, while endorsing changes to the Constitution to protect the current definition of marriage from legal challenge. ... Read more »

SINGAPORE – Insurers should not be the final arbiter of work injury claim disputes as this does not ensure fairness for gig workers and the platform companies that hire them, ... Read more »

As of Thursday, 1 December 2022, the City of Cape Town is suspending its MyCiTi Airport Service bus route due to diesel prices in South Africa rising by over 50% ... Read more »

Concentrations of fine particles in the air were recorded at three times above the acceptable limits as pollution has worsened with the arrival of winter. Read more »

The Netherlands were predicted to have a positive campaign after failing to qualify in 2018. Louis Van Gaal has a number of stars on his roster with the likes of ... Read more »

Joshua Doolin is seen in an image captured outside the U.S. Capitol on Jan. 6, according to an FBI affidavit. A Polk City man charged in connection with the U.S. ... Read more »

Imagine being miles away from civilization, hiking through the Pisgah National Forest thinking about where you are going to set up camp for the night when suddenly it starts to ... Read more »

World Cup Fans Are Refusing to Speak to Israel TV Presenters: 'Not Welcome'

As cold water swimmers warned of dangerous health risk this winter, what are the symptoms of hypothermia?

Cold water swimmers have been alerted to dangerous health risks this winter Parliament Hill Lido in north London has urged visitors to swim safely after at least one person a ... Read more »

Dwanye Johnson: what did The Rock say about Henry Cavill returning as Superman in Black Adam movie?

U.S. Treasury yields pulled back on Tuesday as investors closely watched Covid developments in China and digested comments from Federal Reserve officials on monetary policy plans. The yield on the ... Read more »

Rallies against China's unusually strict anti-COVID measures spread to several cities over the weekend in the biggest show of opposition to the ruling Communist Party in decades. Read more »

The US Geological Survey has warned people living on the Big Island that an eruption "can be very dynamic, and the location and advance of lava flows can change rapidly". Read more »

Buying in Aspen: ski in winter, hike or horseride in summer and watch your house prices rise year round

White Pond developer, mayor and half his Cabinet answer questions on project

China protests: Why are there demonstrations and what is the zero-COVID policy?

What is diphtheria? What are symptoms of disease and is there a vaccine - Manston outbreak explained

Op-Ed: California’s carbon-offset forests aren’t trapping much carbon. Here’s how to do better

New era for Juventus in wake of Agnelli resignation

The Old Course Hotel, St Andrews: a spiritual experience at the home of golf

Housing market ‘balance’ could return in 2023, but interest rates the ‘wildcard’: Re/Max

Letters to the Editor: Leonardo da Vinci and me -- the smug satisfaction of being left-handed

Commentary: Ending affirmative action won’t level the playing field. It took me over 30 years to do that for my family