The Met Office says a new Atlantic stream will see gale-force winds and torrential rain lash most parts of Britain next week. Temperatures across the country will be mild and moderate averaging between 7-10C (44.6-50F) on Saturday, October 30 and between 13-17C (55.4-62.6F) on Sunday, October 31 as low pressure dominates the UK weather system.

The Met Office said: “Atlantic systems will continue to move in from the west, bringing heavy rain and strong, locally gale-force winds. 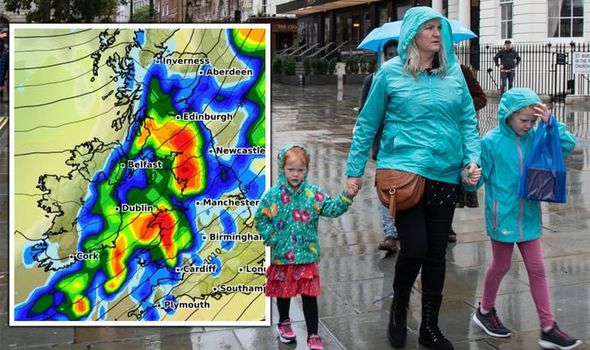 “The rest of October will continue to see unsettled and windy weather arriving from the Atlantic, with outbreaks of potentially heavy rain for many.

“Wettest in the west and northwest, but still with brief dry interludes.

“Driest conditions likely across some south and south-eastern areas.” 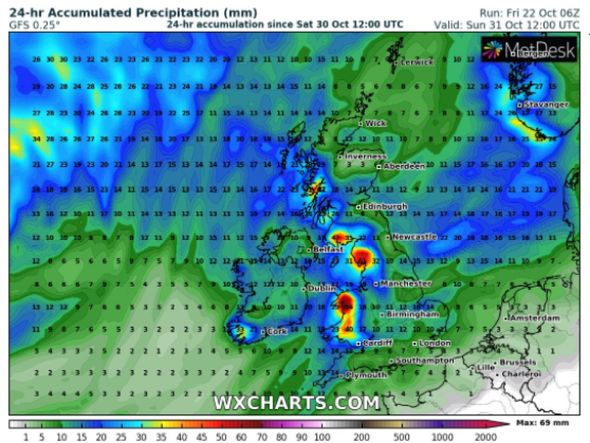 Meanwhile, a varied range of between 23 and 35mm of rain (0.9-1.37 inches) will fall in across the western half of Scotland with Dumfries and Galloway seeing 47mm (0.59 inches) by Sunday lunchtime. 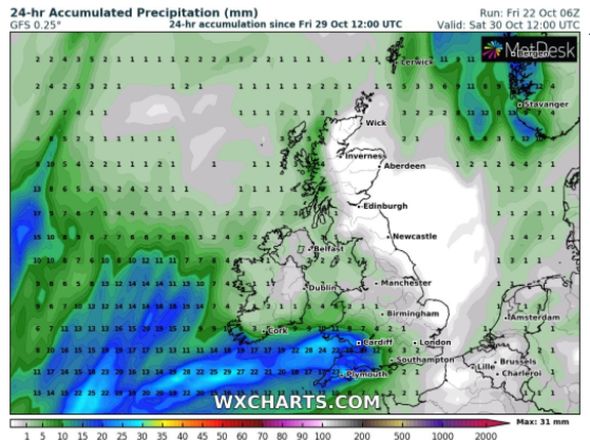 The eastern half of Scotland and England is expected to remain drier with only lighter spells of between 10 and 14mm (0.39-0.55 inches).

The South Coast of England and Scottish Highlands will see the lowest amount of rain with ranges of between 7 and 10mm (0.27-0.39 inches).

Going into today, there will be some bright spells during this afternoon however thick clouds will build in from the west bringing outbreaks of rain and drizzle across Northern Ireland and Scotland.

On Sunday (October 24), outbreaks of rain and drizzle will clear to reveal sunny spells and scattered showers which will be locally heavy across western areas. 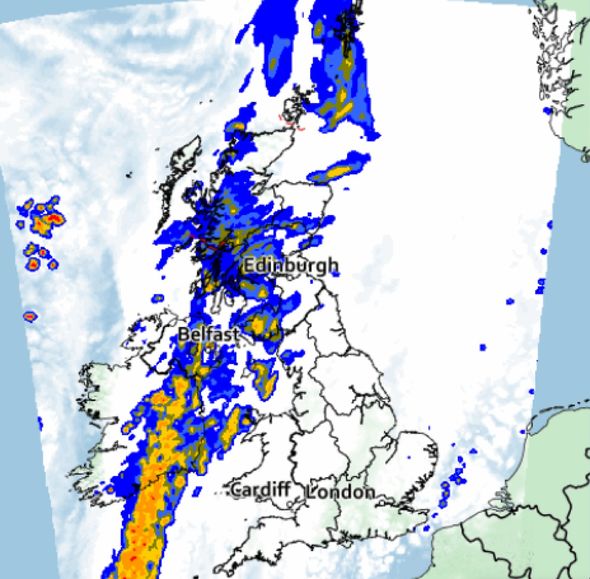 It will be a brighter day on Monday (October 25) with spells of sunshine and patchy cloud cover although there is a continued chance of showers which will be most frequent in the west, according to the Met Office.

Met Office forecaster Alex Deakin, added: “It will turn milder slowly but surely over the weekend. Weather fronts coming in from the west will bring rain.

“The winds will pick up again on Saturday and there will be some rain in the west.

“It is half term for many of us and the weather is going to be pretty changeable.

“Low pressure is nearby on Monday.

“The main themes for the week are that the weather is going to be coming in from the west and the Atlantic.

“Much more likely to continue to see the Atlantic influencing our weather so there will be spells of rain and it will keep temperatures around average for the time of year.

Charles bids farewell to Barbados after end of monarchy

Ontario pot products often out of stock because of poor forecasts: auditor's report

TORONTO — Ontario’s auditor general says some cannabis products are often out of stock because the province’s pot retailer is inaccurately forecasting inventory levels.  © Provided by The Canadian Press ... Read more »

LOS ANGELES — Jacqueline Avant, wife of the music executive known as the “Godfather of Black Music,” was shot and killed in at the couple’s home early Wednesday. © Provided ... Read more »

Fintechs helped Black-owned small businesses get access to PPP loans during the pandemic more than banks did. It's weird.

© Provided by Business Insider JJ Gouin/Getty Images The Paycheck Protection Program was a lifeline for businesses during the pandemic. But it seems not every small business could easily turn ... Read more »

© Provided by Business Insider Millennials and boomers are in a housing war for starter homes. Allen J. Schaben/Getty Images Some millennials blame boomers for the starter home shortage, a ... Read more »

HALIFAX — A disabilities group in Nova Scotia is pushing to convert a landmark court victory into funding for improvements to housing and care. © Provided by The Canadian Press ... Read more »

© BBC Gavin Patterson appealed against his original sentence at Douglas Courthouse A man who stole a car and used it to transport stolen goods has had his jail sentence ... Read more »

It’s not exactly the $64M deal that Jack Hughes landed Tuesday, but the New Jersey Devils signed another contract. Shakir Mukhamadullin, one of the team’s 2020 first-round picks, inked his ... Read more »

Ron Edwards has taken over the general manager position for Medicine Hat Exhibition & Stampede as of Nov. 12, replacing Kara Brake. Edwards told the News his appointment to the ... Read more »

The Maple Leafs were on the ropes. © Provided by The Canadian Press Down 2-0 after the first period to the lowly Chicago Blackhawks at the United Center on Oct. ... Read more »

Boosters or global vaccine sharing? Canada can do both amid Omicron: experts

© Simon Maina/AFP via Getty Images A health official prepares a syringe with the Moderna COVID-19 vaccine prior to administering it during a mass COVID-19 vaccination drive in Nairobi on ... Read more »

The New York Islanders will be back on the ice Thursday against the San Jose Sharks, resuming their schedule after missing the last two games due to a COVID outbreak. ... Read more »

RBC raises dividend, reports profits up but under pressure from interest rate margins

TORONTO — Royal Bank of Canada raised its dividend Wednesday as it reported a rise in fourth-quarter profits from last year, though it said earnings were hit by lower margins ... Read more »

© EPA Ursula von der Leyen said it was “appropriate” for EU states to consider compulsory jabs It is time for European Union countries to think about mandatory vaccination to ... Read more »

© Provided by Al Jazeera A ration card cash assistance programme, which comes with an estimated price tag of $556m to provide up to $126 a month for eligible Lebanese ... Read more »

Looks like Kangana Ranaut is in awe of south beauty Samantha Ruth Prabhu. The Family Man 2 actress recently took to Instagram and shared glimpses of her photoshoot with netizens. ... Read more »

Comedian Trevor Noah will be back to host Grammy Awards 2022

© IANS Trevor Noah Los Angeles, Dec 1 (IANS) For the second year in a row, Trevor Noah, anchor of ‘The Daily Show’ on Comedy Central, will be back to ... Read more »

Naagini 2, 1st December 2021, Written Update: Trishul gets a glimpse of his powers

© Provided by Pinkvilla In today’s episode, Digvijay yells at Baba because the ritual got ruined. Baba tells it must’ve been Subramanya Swami or Lord Shiva’s energy that stopped sarpayaga. ... Read more »

© Provided by Zee News New Delhi: Filmmaker Ram Madhvani’s ‘Aarya 2’ is all set for release. Sharing the special elements of the show, Ram said, “The signature element between ... Read more »

© Provided by Pinkvilla In today’s episode, Arjun takes Roja to their room. Arjun says to Roja how important she is in his life. They discuss how they met each ... Read more »

Premier Handball League: All you need to know about the upcoming league

© Provided by Zee News After the inception of Indian Premier League, the richest cricket league not only in the country but across the world, there were many leagues that ... Read more »

© Provided by Pinkvilla Ariana Grande has released a teaser from her new single with Kid Cudi, Just Look Up, which the duo created as the theme song of the ... Read more »

Police at the scene near 124th St. and First Avenue, where Sousakii Young was shot and killed. William C. Lopez/NYPOST A convicted drug dealer is facing murder and attempted murder ... Read more »

© Qilai Shen/Bloomberg via Getty Images Photovoltaic modules at a solar power plant near Golmud, Qinghai province, China, on Saturday, Sept. 11, 2021. 2021 is on course to break a ... Read more »

Boebert's home paper apologises for her and calls her an embarrassment

Colorado Representative Lauren Boebert’s penchant for making flagrantly Islamophobic and dishonest statements about one of her congressional colleagues has pushed the largest newspaper in her state to call her an ... Read more »

The Centre on Wednesday notified a legislation to repeal the three agriculture laws against which thousands of farmers have been protesting for over a year now. The Farm Laws Repeal ... Read more »

© Provided by The Guardian Photograph: ITV/Rex/Shutterstock The actor Bernard Holley, who has died aged 81, was a well-known face on British screens for 50 years, notably a four-year stint ... Read more »

The armed forces have been empowered to import equipment even if it is on a declared negative list in case there are immediate requirements or products delivered by domestic companies ... Read more »

Emmerdale star Fiona Wade spoke on This Morning about how she used the anxiety her character Priya Sharma’s challenging storyline gave her to her benefit. Talking candidly on the ITV ... Read more »

The Calcutta High Court has restrained Shree Baidyanath Ayurved Bhawan Pvt. Ltd. from publishing or uploading any advertisement that allegedly disparages Dabur Ltd.’s goodwill and the reputation of its product ... Read more »

How to earn Knockout medal in Call of Duty: Mobile

How to get 2,021 free Aeos Tickets in Pokémon Unite

Philippine envoy to US feted for exemplary service