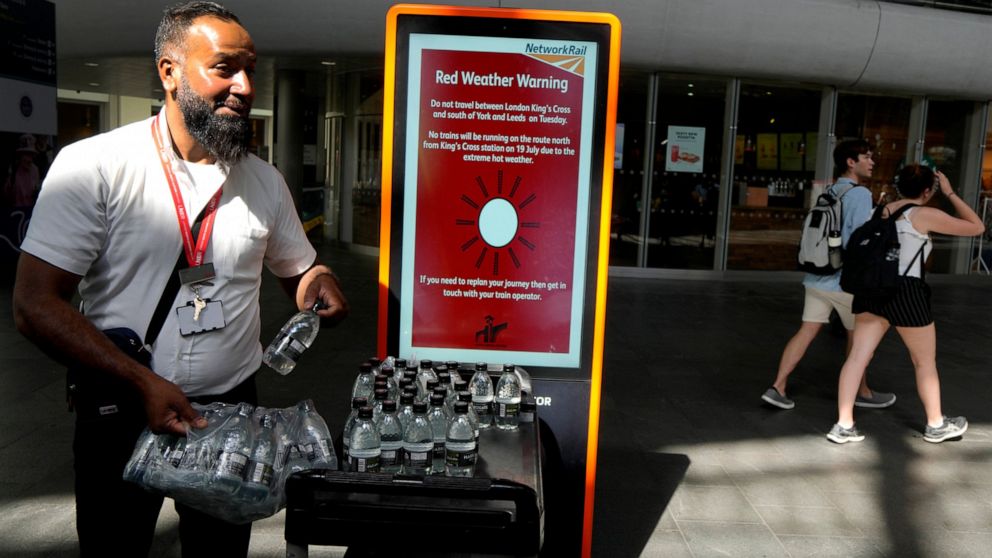 A railway worker hands out bottles of water to passengers at King’s Cross railway station where there are train cancellations due to the heat in London, Tuesday, July 19, 2022. Millions of people in Britain woke from the country’s warmest-ever night on Tuesday and braced for a day when temperatures could break records, as a heat wave scorching Europe walloped a country not built for such extremes. (AP Photo/Kirsty Wigglesworth) The Associated Press

LONDON — Britain shattered its record for highest temperature ever registered Tuesday amid a heat wave that has seared swaths of Europe, as the U.K.'s national weather forecaster said such highs are now a fact of life in a country ill-prepared for such extremes.

The typically temperate nation was just the latest to be walloped by unusually hot, dry weather that has triggered wildfires from Portugal to the Balkans and led to hundreds of heat-related deaths. Images of flames racing toward a French beach and Britons sweltering — even at the seaside — have driven home concerns about climate change.

The U.K. Met Office weather agency registered a provisional reading of 40.3 degrees Celsius (104.5 degrees Fahrenheit) at Coningsby in eastern England — breaking the record set just hours earlier. Before Tuesday, the highest temperature recorded in Britain was 38.7 C (101.7 F), set in 2019. By later afternoon, 29 places in the UK had broken the record.

As the nation watched with a combination of horror and fascination, Met Office chief scientist Stephen Belcher said such temperatures in Britain were “virtually impossible” without human-driven climate change.

He warned that “we could see temperatures like this every three years” without serious action on carbon emissions.

The sweltering weather has disrupted travel, health care and schools. Many homes, small businesses and even public buildings, including hospitals, in Britain don’t have air conditioning, a reflection of how unusual such heat is in the country better known for rain and mild temperatures.

The intense heat since Monday has damaged the runway at London’s Luton airport, forcing it to shut for several hours, and warped a main road in eastern England, leaving it looking like a “skatepark,” police said. Major train stations were shut or near-empty Tuesday, as trains were canceled or ran at low speeds out of concern rails could buckle.

London faced what Mayor Sadiq Khan called a “huge surge” in fires because of the heat. The London Fire Brigade listed 10 major blazes it was fighting across the city Tuesday, half of them grass fires. Images showed several houses engulfed in flames as smoke billowed from burning fields in Wennington, a village on the eastern outskirts of London.

Sales of fans at one retailer, Asda, increased by 1,300%. Electric fans cooled the traditional mounted troops of the Household Cavalry as they stood guard in central London in heavy ceremonial uniforms. The length of the changing of the guard ceremony at Buckingham Palace was shortened. The capital’s Hyde Park, normally busy with walkers, was eerily quiet — except for the long lines to take a dip in the Serpentine lake.

“I’m going to my office because it is nice and cool,’’ said geologist Tom Elliott, 31, after taking a swim. “I’m cycling around instead of taking the Tube.’’

Ever the stalwart, Queen Elizabeth II carried on working. The 96-year-old monarch held a virtual audience with new U.S. ambassador Jane Hartley from the safety of Windsor Castle.

A huge chunk of England, from London in the south to Manchester and Leeds in the north, remained under the country’s first “red” warning for extreme heat Tuesday, meaning there is danger of death even for healthy people.

Such dangers could be seen in Britain and across Europe. At least six people were reported to have drowned while trying to cool off in rivers, lakes and reservoirs across the U.K. In Spain and neighboring Portugal, hundreds of heat-related deaths have been reported in the heat wave.

Climate experts warn that global warming has increased the frequency of extreme weather events, with studies showing that the likelihood of temperatures in the U.K. reaching 40 C (104 F) is now 10 times higher than in the pre-industrial era.

The head of the U.N. weather agency expressed hope that the heat gripping Europe would serve as a “wake-up call” for governments to do more on climate change. Other scientists used the milestone moment to underscore that it was time to act.

“While still rare, 40C is now a reality of British summers,” said Friederike Otto, Senior Lecturer in Climate Science at Imperial College London’s Grantham Institute for Climate Change. “Whether it will become a very common occurrence or remains relatively infrequent is in our hands and is determined by when and at what global mean temperature we reach net zero.”

Drought and heat waves tied to climate change have also made wildfires more common and harder to fight.

In the Gironde region of southwestern France, ferocious wildfires continued to spread through tinder-dry pines forests, frustrating firefighting efforts by more than 2,000 firefighters and water-bombing planes.

Tens of thousands of people have been evacuated from homes and summer vacation spots since the fires broke out July 12, Gironde authorities said.

A smaller third fire broke out late Monday in the Medoc wine region north of Bordeaux, further taxing resources. Five camping sites went up in flames in the Atlantic coast beach zone where blazes raged around the Arcachon maritime basin famous for its oysters and resorts.

In Greece, a large forest fire broke out northeast of Athens, fanned by high winds. Fire Service officials said nine firefighting aircraft and four helicopters were deployed to try to stop the flames from reaching inhabited areas on the slopes of Mount Penteli, some 25 kilometers (16 miles) northeast of the capital. Smoke from the fire blanketed part of the city’s skyline.

But weather forecasts offered some consolation, with temperatures expected to ease along the Atlantic seaboard Tuesday and the possibility of rains rolling in late in the day.

Dallas Teen Becomes Mayor for a Day in Ceremonious Role

Severe asthma may have been a contributing factor in Coolio’s death, according to a report. The “Gangster’s Paradise” rapper struggled with the condition over the years, and even traveled with ... Read more »

A SEPTA bus in Center City Philadelphia. PHILADELPHIA (KYW Newsradio) — SEPTA has unveiled the first draft of a top-to-bottom overhaul of its bus routes. The proposal alters many bus ... Read more »

The social media app BeReal has become a popular way for users to show their friends what their life really looks like. Photo by Jakub Porzycki/NurPhoto via Getty Images It’s ... Read more »

THE day John Wayne Gacy was executed, fellow serial killer Jeffrey Dahmer was also preparing to meet his maker. Dahmer wasn’t facing the death penalty for the murder of his ... Read more »

Trump Is 'Cornered Animal' That Will 'Damage' the GOP: George Conway

Former President Donald Trump throws hats into the crowd during a Save America rally on October 1, 2022 in Warren, Michigan. Conservative lawyer George Conway says Trump is like a ... Read more »

Which Teams Have Qualified for the 2022 MLS Cup Playoffs? Bracket, Format, More

2022 MLS Cup Playoffs key dates, bracket, format, more originally appeared on NBC Sports Boston The race for the 2022 MLS Cup is heating up. Teams from each conference are ... Read more »

Tax retreat SCRAPPING the tax cut for the richest is humiliating for the Chancellor but the right call. Whatever the policy’s economic arguments it was rushed, previously undiscussed even in ... Read more »

Winnipeg is edging closer to another record-breaking year for homicides, after a violence-filled weekend. Currently, 41 Winnipeggers have lost their lives to violent crime in the city this year. The ... Read more »

Is Costco Closed on Columbus Day 2022?

Is Costco Closed on Columbus Day? Columbus Day, which falls on Monday, October 10th this year, is right around the corner. If you have the day off, you may want ... Read more »

A Florida man could be seen on video using his baby son as a human shield during a tense confrontation with police that ended with him being tased and arrested. ... Read more »

Dozens of people were seen in a video running into an intersection during an illegal street takeover just outside of Compton on Sunday night, narrowly avoiding cars that swirled along ... Read more »

While in hospital with Covid-19 in October 2020, former president Donald Trump was so enamoured of the visual of him emerging from Walter Reed National Military Medical Centre and ripping ... Read more »

Alberto E. Rodriguez/Getty Images With Halloween on the horizon, Marvel Studios knows just how to get Marvel Cinematic Universe fans into the holiday spirit. On October 7, 2022, Disney+ subscribers ... Read more »

Demonstrators protest a visit by Corey Lewandowski, President Donald Trump’s former campaign manager, at the University of Chicago on February 15, 2017 in Chicago, Illinois. Lewandowski was invited to the ... Read more »

The families of a 24-year-old woman and a 13-year-old girl from the Treaty 4 territory in Saskatchewan continue to speak out on the injustices that left many unanswered questions in ... Read more »

Ex-Gov. Andrew Cuomo is not letting Kathy Hochul — or voters — forget his role in what she is now claiming as her accomplishment. Hochul celebrated completion of the long-sought ... Read more »

A group of researchers at McGill University conducted a study into online misinformation and the possible effects on the provincial election campaign and say the findings have implications for the ... Read more »

Arizona clinic has workaround for abortion pill ban A Phoenix abortion clinic has developed a way for patients who can end their pregnancy using a pill to get the medication ... Read more »

‘A travesty of justice’: MMIWG2S families call for more police accountability in B.C.

Warning: This story deals with disturbing subject matter that may upset and trigger some readers. Discretion is advised. The families of two First Nations women and two girls who were ... Read more »

Ingram, McCollum questionable for Bulls-Pelicans originally appeared on NBC Sports Chicago The New Orleans Pelicans added a pair of stars to their injury report ahead of Tuesday’s preseason opener against ... Read more »

U-TURNING Liz Truss faces a new onslaught over benefits spending after her embarrassing 45p tax climbdown. The weakened Prime Minister said she wants to emulate Mrs Thatcher, but unlike her ... Read more »

Uyghurs in Xinjiang die after being poisoned by Covid disinfectant

Residents wearing masks walk along the streets of Aksu in western China’s Xinjiang region – Ng Han Guan /AP At least 13 Uyghurs in Xinjiang have died after being poisoned ... Read more »

FRACKING should take place in rural Somerset, Jacob Rees-Mogg insisted yesterday – but slapped down calls for local referendums to give the OK. The Business Secretary said he would be ... Read more »

SEOUL – North Korea fired a ballistic missile over Japan on Tuesday, prompting a warning for residents to take cover and a temporary suspension of train operations in northern Japan. ... Read more »

KILT-wearing King Charles was the big grin yesterday as he visited Scotland. His Majesty beamed as cries of God Save the King rang out while he and Queen Consort Camilla ... Read more »

The Alberta government says it is spending $1 million to establish a non-profit organization that will work to attract more international students. The province says the Alberta Bureau for International ... Read more »

COLLECTORS crashed the Royal Mint website yesterday in a rush to get their hands on the first King Charles III coins. Some waited more than three hours for new 50p ... Read more »