The UAE government is working with Jeff Bezos’s Blue Origin to bring space tourism flights to the country, the Ministry of Economy has announced.

On Tuesday, The National revealed that the space tourism company was interested in setting up a spaceport in the UAE desert for suborbital flights.

Through this collaboration, we look forward to leveraging Blue Origin’s leading expertise in space manufacturing and space and low Earth orbit flight services to support the UAE’s plans

They agreed to develop a plan that would accelerate the ministry’s ambition for economic development through space activities, including space tourism.

“The ministry is working with its partners to establish an open economic ecosystem that attracts investments to target sectors and stimulate innovative companies to support sustainable development and create an advanced investment environment,” Mr bin Touq said.

“Through this collaboration, we look forward to leveraging Blue Origin’s leading expertise in space manufacturing and space and low Earth orbit flight services to support the UAE’s plans.

“We are also keen to expand the scope of our partnerships with Blue Origin to build and develop space tourism and enhance the national efforts in this respect.”

Blue Origin has sent eight people into space so far through its New Shepard missions, including Star Trek actor William Shatner, who became the oldest person in space, aged 90.

Now, the space tourism company is searching for other locations around the world to set up spaceports.

Mr Sherwood told The National that the UAE was an “obvious choice” and that there were discussions taking place.

“It’s an obvious place to look here. All we really need is some desert. One of the enduring qualities of the West Texas desert is that it is hard to get to the El Paso airport. You have to drive for a couple of hours and it is in the middle of nowhere,” he said.

“A couple of nights ago I slept over in Sharjah and did some stargazing in the desert. It was only 30 minutes away from Dubai, so I think it’s very promising to think about areas here.”

The UAE’s new space strategy involves creating an economic impact by going into partnership with private companies, as well as research and development in space.

The space sector’s added value in the UAE has now reached about Dh3 billion and investments in space are Dh22 billion.

Figures show the sector provides more than 3,200 jobs, with 57 space companies and organisations operating in the country.

These include five space science research centres and start-up companies.

The UAE’s total foreign trade in aerospace vehicles and their parts has reached Dh190 billion.

“Today, the UAE is home to several major space companies, offering excellent opportunities to start-ups in capitalising on the potential of operating outside the Earth’s orbit. We will move forward with our efforts to attract the companies operating in this field to become partners in driving growth and advancement of UAE’s space economy,” Mr Al Marri said.

AzurX is a private company in Dubai that is working as a strategic adviser to Blue Origin, and it will act as a bridge between the UAE and the space tourism company.

Anna Hazlett, chief executive of AzurX, told The National that it would be helping Blue Origin with its localisation strategy in the UAE, and would assist customers with space tourism flights and opportunities on Orbital Reef — a new private space station announced by Blue Origin on Monday. 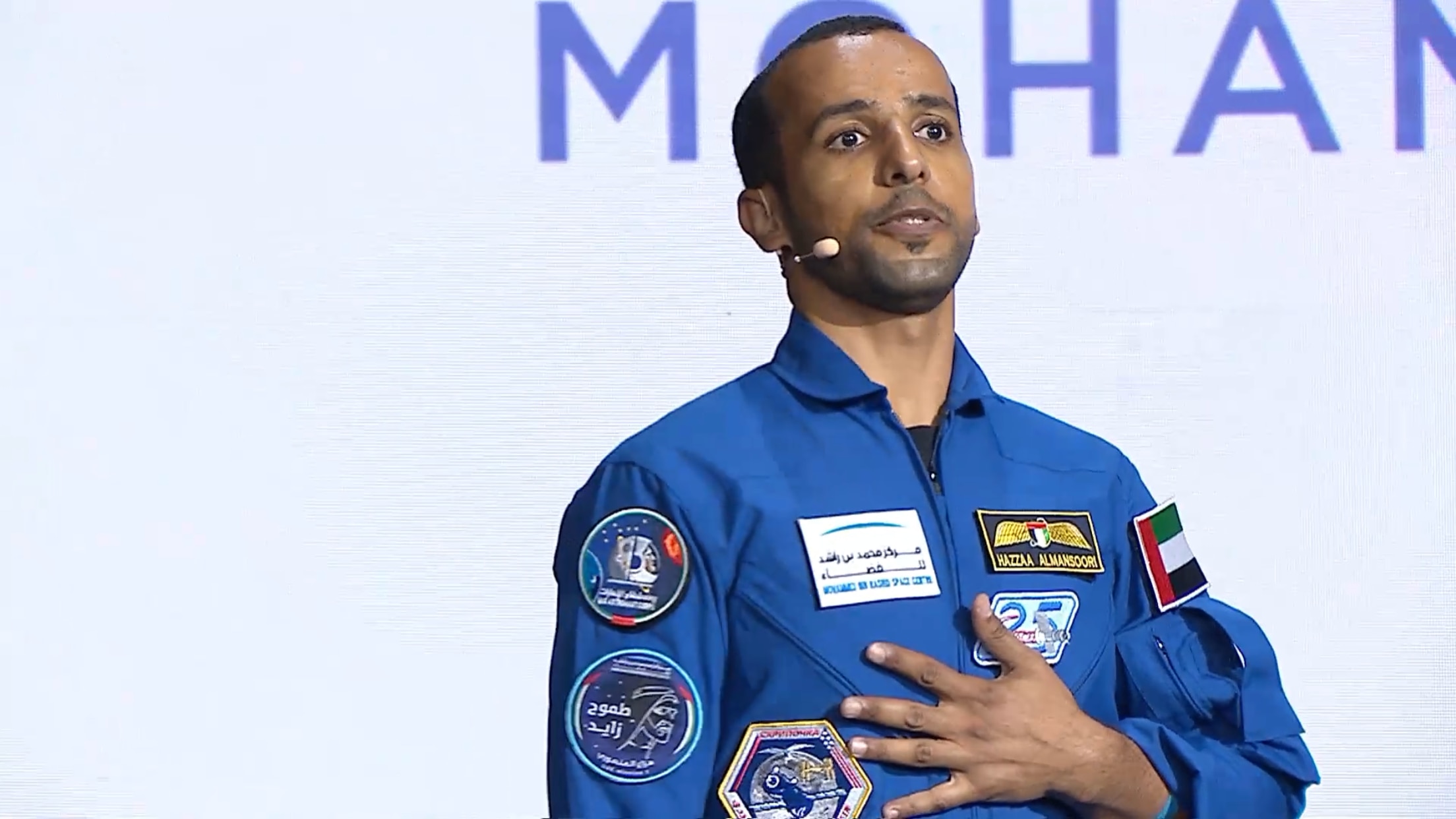 Kit Malthouse outside Number 10 Downing Street – Kirsty O’Connor/PA Downing Street will hold a Christmas staff party this year despite the furore over a gathering last December and whether ... Read more »

Science fiction movies have prepared us for the distinct possibility that artificial intelligence will walk among us someday. How soon? No one can say — but that isn’t stopping a ... Read more »

Is Russian President Vladimir Putin going to launch an invasion into neighboring Ukraine? Enormous movements of Russian troops and military equipment toward the shared border have raised the alarm among ... Read more »

The next generation of NASA astronauts

A leader of L.A. pandemic fraud ring gets more than 10 years in prison

An Encino real estate broker was sentenced Monday to more than 10 years in prison for her role in a family fraud ring that stole $18 million in emergency pandemic ... Read more »

© Provided by CinemaBlend Tobey Maguire Spider-Man suit There are plenty of comic book movies that were never realized for a myriad of reasons. Some of the most famous examples ... Read more »

Arsenal boss Mikel Arteta will not be happy after his side’s last-gasp loss to Everton on Monday night. Demarai Gray secured Everton’s win as his spectacular effort from outside the ... Read more »

© Provided by Daily Mail MailOnline logo He plays the intrepid adventurer in an upcoming Christmas adaptation of Around the World In 80 Days. But David Tennant has criticised Phileas ... Read more »

© Provided by Daily Mail MailOnline logo Even if just popping out to the shops, your journey might leave you with a sore back and aching knees. But imagine spending ... Read more »

It was the day before gunfire on the street took the life of 24-year-old Miya Brophy-Baermann. But well before shots were fired, the forces of the internet-driven Information Age were ... Read more »

A British woman has testified that Ghislaine Maxwell pressured her into giving Jeffrey Epstein sexual massages when she was still a teenager, assuring her she would have “fun” with him. ... Read more »

“We have to move quickly. That’s why I’ve described the actions we’re taking today as a ‘pre-emptive strike’; get ahead of this problem before it deepens, and use the thing ... Read more »

© Provided by The Indian Express THE CENTRE on Monday told the Delhi High Court that it has decided to not produce before the court the original record pertaining to ... Read more »

Indira Gandhi National Open University will end the registration process for fresh admissions for IGNOU July Session 2021 on December 7, 2021. Candidates who want to apply for Bachelor and ... Read more »

© Provided by The Indian Express “A regulated economy is a critical facet of ensuring a balance between private business interests and the State’s role in ensuring a just polity ... Read more »

© Provided by Hindustan Times Both leaders are expected to meet at the Hindon airstrip and arrive at the rally venue in a helicopter, Hindustan Times reported earlier. (File image) ... Read more »

© Provided by News18 With Sidhu Moosewala Jumping into the Fray, a Look at Stars who Couldn’t Shine in Punjab Politics While several artistes and celebrities have joined Punjab politics ... Read more »

© Provided by Hindustan Times The SC judgment of March 25 laid common benchmarks for grant of PC to WSSCOs vis-à-vis their male counterparts. The Supreme Court on Monday directed ... Read more »

© Provided by DNA Amid the rising fear of the new COVID-19 variant Omicron, the Maharashtra government has now revealed that it is keeping a close eye on the current ... Read more »

The delivery of health care has dramatically shifted due to the COVID-19 pandemic causing a move from in-person visits to some form of virtual care. In support of this move, ... Read more »

Dec. 6—One man is dead after a stabbing took place Dec. 4 in Pueblo. According to a Pueblo Police Department Press release, officers responded to a call at approximately 6:07 ... Read more »

A fight inside a Queens home Monday night erupted in gunfire that killed one man and wounded another, cops said. The two men were arguing with four other men who ... Read more »

JOINT BASE PEARL HARBOR-HICKAM, Hawaii (AP) — The U.S. Navy announced Monday that it has suspended use of a massive World War II-era fuel storage complex above a Hawaii aquifer ... Read more »

© Provided by Mid-Day Are they tying the knot? Are they not? That was the country’s favourite subject of gossip over the past month as rumours abounded about Vicky Kaushal ... Read more »

Next pandemic could be more lethal than Covid-19, warns vaccine creator

Future pandemics could be even more lethal than Covid-19 so the lessons learned from the outbreak must not be squandered and the world should ensure it is prepared for the ... Read more »

Peyton Manning was rebuffed by Patriots PR, but he was not offended. The Patriots faced the Bills on “Monday Night Football,” with Peyton and brother Eli on ESPN2’s “Manningcast” simulcast. ... Read more »

More than half the schools in Ireland have been advised to shut on Tuesday. The Government is taking no chances with Storm Barra, with the Department of Education releasing a ... Read more »

Irish health officials have today reported 2,950 new cases of Covid-19. 536 people are now receiving treatment in hospital – 110 of whom are in the ICU. This marks an ... Read more »