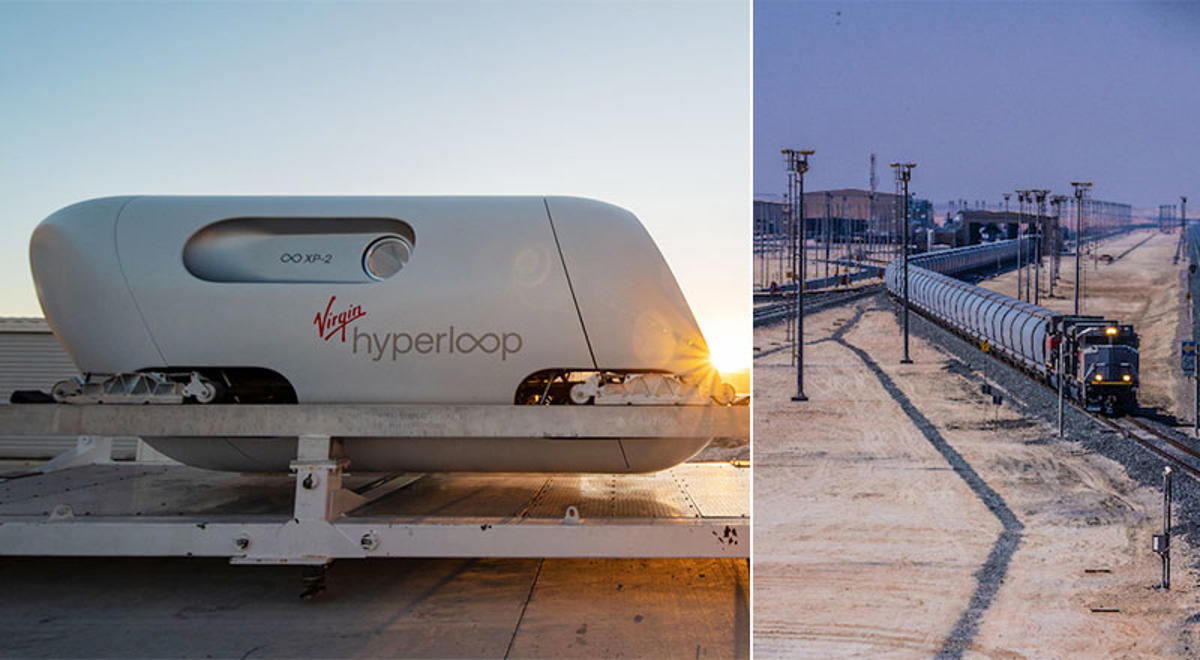 From pods to driverless cars, a rail connecting all seven emirates and more…

As we get closer to the grand Golden Jubilee, the UAE is not only looking back on all of its accomplishments but is planning ahead for the next 50.

The UAE is already home to a number of public transportation systems including water taxis, a metro, a tram system and a monorail, but soon it will be home to much more.

On Instagram, the UAE’s Year of the 50th celebrations official page has shared a video outlining just what citizens, residents and visitors can expect in the next 50 years.

A post shared by Year of the 50th عام الخمسين (@uaeyearof)

A post shared by Year of the 50th عام الخمسين (@uaeyearof) 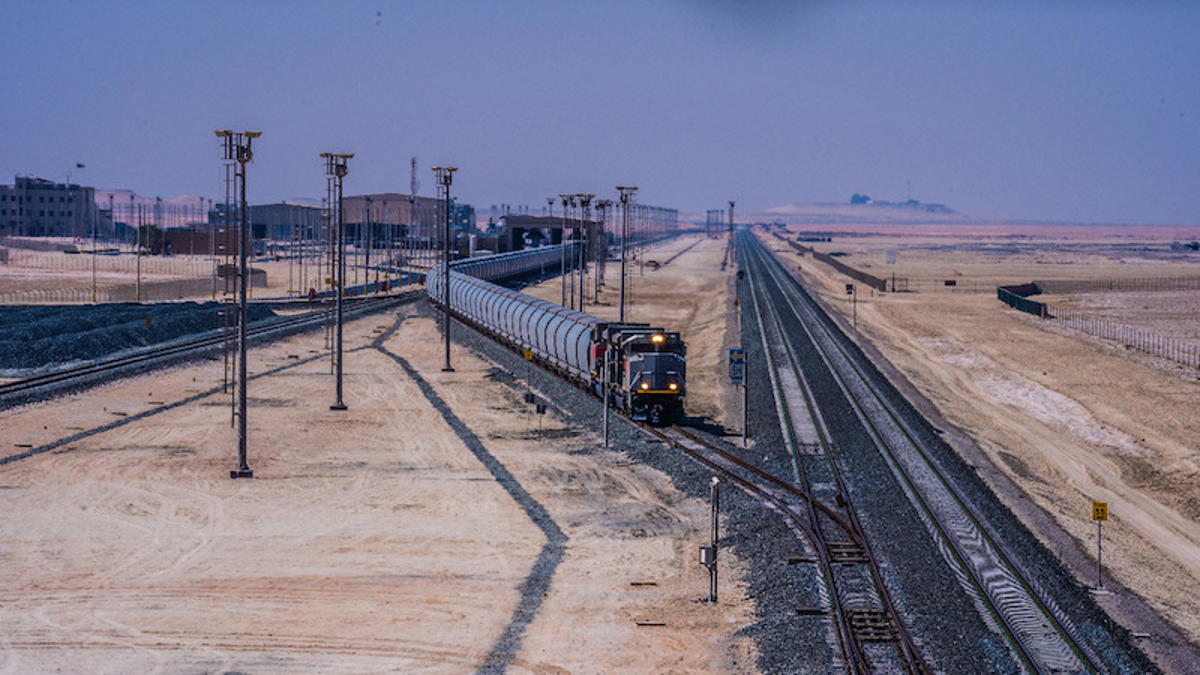 One of its most ambitious travel projects is the 1200km long Etihad Rail network.

The Etihad Rail project began in 2009 and the first phase, which covers a stretch of track between Shah and Habshan to the port of Ruwais in the Al Dhafra Region of Abu Dhabi, became operational in 2016.

Once completed it will stitch the seven emirates together with a passenger and freight transport track, taking the service from the Eastern seaboard of Fujairah, right up to the very edge of Saudi Arabia.

Work on the second phase (which is split into Packages A, B, C and D) began at the beginning of 2021 and is where things get exciting for the other emirates. Some of the stops along the journey will include Abu Dhabi, KIZAD, Khalifa Port, Jebel Ali Port, Dubai, Sharjah, Ras al Khaimah and Fujairah, linking with the existing line at Ruwais, effectively uniting the major industrial ports and trading centres of the country.

Read more about this project here.

On June 7, 2021 Roads and Transport Authority (RTA) signed a Memorandum of Understanding with Zhong Tang Sky Railway Group – a leading company in the suspended railway firm with the aims of bringing a futuristic suspended transport network to Dubai.

The signing of the Memorandum is part of RTA’s ongoing efforts to increase public transportation trips to 26 per cent by 2030 with the ultimate objective being to rank Dubai as the best place for living and business, a destination for visitors, and the smartest and happiest city in the world.

The journey from Dubai and Abu Dhabi can take up two hours by road. With the arrival of the Hyperloop though, passengers can reach Abu Dhabi from Dubai in just 12 minutes.

An animated video shared by Virgin Hyperloop in January this year shows exactly what it will be like to ride the super-fast transport.

Additionally…Dubai will soon be home to driverless taxis 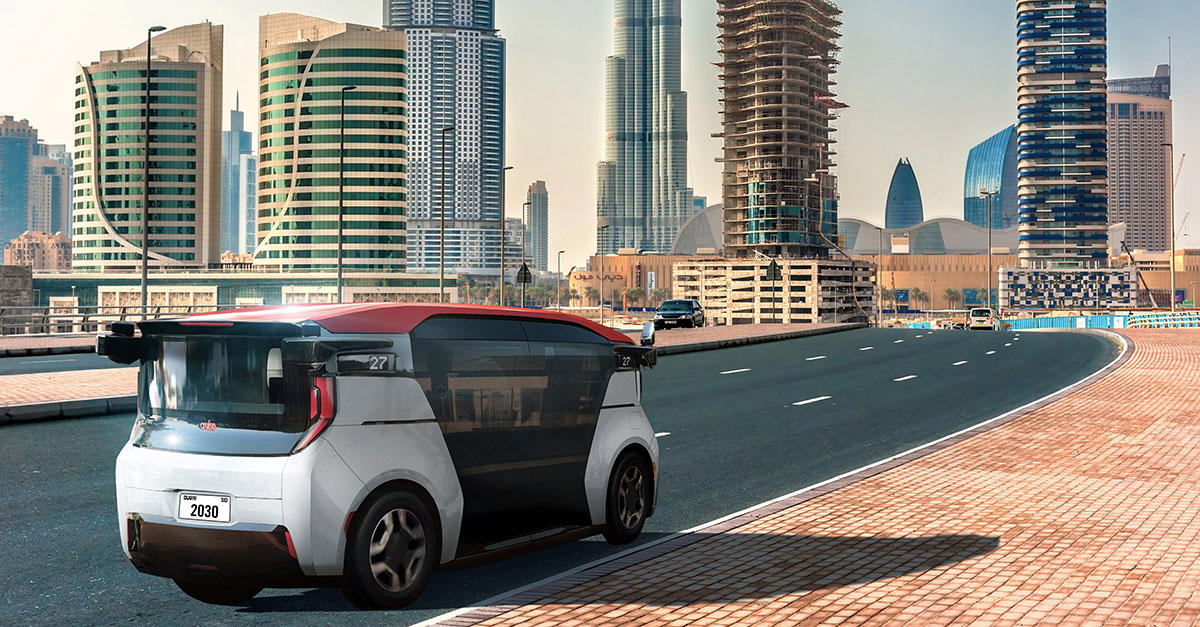 In April 2021, His Highness Sheikh Hamdan bin Mohammed bin Rashid Al Maktoum, Dubai Crown Prince and Chairman of The Executive Council of Dubai announced the signing of an agreement between Road and Transport Authority (RTA) and Cruise, a leading US-based autonomous vehicle company that will operate self-driving taxis and ride-hailing services in the emirate.

The agreement will make Dubai the first non-US city in the world where Cruise will commercially operate these vehicles.

These self-driving vehicles are expected to significantly improve road safety levels as over 90 per cent of accidents are due to human errors. The vehicles are all-electric, environmentally friendly and capable of serving a wide range of clients from different community segments, including seniors and people of determination.

Sharjah’s high-speed electric sky pods will not only transport passengers between emirates but also cargo at speeds ranging from 150kph to 500kph.

SkyWays or Unicars as it is named is a hanging transport system made up of individual unicars connected by a long cable suspended above the ground.

During the test phase, the unicars only travelled a short distance but once complete, they will run 2.8 kilometres from the beginning of the park (Sharjah Airport Road) to the end (Muwaileh Road). Once successful, the government is expected to announce the construction of its routes within the city with further plans for the pods to connect with other emirates.

From campy slashers to vampire erotica, these queer horror films are frighteningly fun

Lesbian vampires, killer unicorns and a gender-bending psychopath — the growing canon of queer horror films has it all. Read more »

It's true, Disneyland can be better than Disney World — Here's 5 times it wins out

JetBlue is offering travelers some scary good deals on flights just in time for Halloween, with 31 routes starting at just $31 one way, the airline shared with Travel + ... Read more »

Producer Jesse Collins to Be Honored by Save the Music

Jesse Collins Save the Music Foundation has selected Jesse Collins as this year’s #MusicSaves honoree. The live-event veteran — a founder and CEO of Jesse Collins Entertainment who has spent ... Read more »

You Can Own Palm Beach's Only Private Island for $210 Million

South Florida’s real estate market is growing at exponential rates. Properties in the Sunshine State have been flying off the market at the speed of light, setting record after record ... Read more »

Restomods aren’t anything new these days. Typically, they involve adding a bunch of new parts to a much older car. Whether it’s an old Bronco with a modern crate engine ... Read more »

Princess Mako Gave Up Her Title for Kei Komuro: Their Love Story, in Their Own Words

Princess Mako’s love don’t cost a thing — not even the $1.3 million Japan offered to pay her when she abdicated her royal title in favor of marrying commoner Kei ... Read more »

© Photo: Justin Sullivan / Staff (Getty Images) A United Auto Workers striker was hit and killed by a car this morning, as reported by OurQuadCities. Not a lot is ... Read more »

AccuWeather meteorologists say more soaking rain and gusty winds are expected to return late this week for portions of the Northeast, a region that was just blasted by the first ... Read more »

JoAnna Cameron, best known for her role on The Secrets of Isis, has died. She was 70. © Provided by People everett Cameron’s former costar Joanna Pang Atkins announced the ... Read more »

New Mexico authorities have not ruled out the possibility of multiple charges in Alec Baldwin’s fatal on-set shooting – including for the actor himself. © Independent Breaking news – Independent ... Read more »

© Sam Boal TÁNAISTE LEO VARADKAR has said the government is working on a possible new testing programme for people who cannot get the vaccine on medical grounds. Speaking this ... Read more »

Get vaccinated within a month or face the sack, Jacinda Ardern tells workers

New Zealand’s government said Tuesday it will expand a vaccine mandate to include thousands of workers who have close contact with their customers – including employees at restaurants, bars, gyms ... Read more »

© Provided by News18 Firefighter Injured in Rescue Operation Dies; Delhi Govt Announces Rs 1 Crore Compensation A firefighter, who was injured during a rescue operation in Narela in Delhi ... Read more »

© Independent Breaking news – Independent New Mexico authorities have not ruled out the possibility of multiple charges in Alec Baldwin’s fatal on-set shooting – including for the actor himself. ... Read more »

Civil Aviation Minister Jyotiraditya Scindia assured AAP MP Sanjay Singh of an inquiry and action after the latter alleged that a Vistara flight had narrowly avoided an accident while landing ... Read more »

© Provided by CNBCTV18 To encourage wider adoption of drones in healthcare, logistics and agriculture sectors, the Centre has notified a traffic management framework for unmanned aircraft in airspace under ... Read more »

House prices remain on the rise across West Dunbartonshire

The average house price in West Dunbartonshire has risen by eight percent over the last year, however the area remains one of the cheapest in Scotland for property. Data published ... Read more »

Spain to give different booster to strengthen J&J vaccine

MADRID (AP) — People who received a shot of the Johnson & Johnson COVID-19 vaccine will be offered a second dose from a different drug maker, Spain’s health authorities said ... Read more »

Local Baptist officials and other ministers have scheduled a news conference on Wednesday about what they say is the lack of concern over a missing Fort Worth teen. Officials noted ... Read more »

A neighbor accused of stabbing three people — including a pregnant woman — during a home invasion in Middle Tennessee has been arrested and charged, authorities say. Austin Swanson, 23, ... Read more »

Tista Biswas, a BJP councillor in the Kolkata Municipal Corporation (KMC), died in a car accident on Wednesday. Biswas was in the race to contest the Bhabanipur bypoll before the ... Read more »

Investigators suspect there were additional live rounds on the set of “Rust” when a shot from a prop firearm fatally wounded cinematographer Halyna Hutchins, officials said Wednesday. An initial investigation ... Read more »

Budget 2021: Acid test for Sunak's budget will follow in the coming months as inflation and cost of living worsens

This the moment that the chancellor finally stepped out of his role as crisis chancellor and got on with the task of rebooting Britain's post-COVID economy. Read more »

Rishi Sunak’s promise of record funding for Scotland, with the Chancellor claiming the the Holyrood Government will receive £41 billion a year, has been questioned by Scotland’s Finance Secretary. Mr ... Read more »

© Provided by Hindustan Times The BMC’s cycle track component of the Powai lake rejuvenation project, however, has drawn the ire of environmentalists who say they are opposed to the ... Read more »

New trailer teases the return of Top Gear next month

A trailer for the new series of Top Gear shows the presenters heading off on a trip in electric camper vans. Paddy McGuinness declares that it “doesn’t get greener than ... Read more »

Biden closes in on deal with Manchin, Sinema as liberals wince

Video captures pulsating UFO dropping out of the sky

‘Dune' Costumes Are Trending for Last-Minute Halloween Shoppers, According to Lyst

Duchess Meghan appears in new video to read her children's book, 'The Bench'

Edinburgh old folk warned: 'Shortage of care staff may mean you have to rely on your family'

Covid: Is the vaccine safe for pregnant women?

MacOS Monterey: Is your computer compatible with Apple's new OS? Find out now

'Writing and creating is my drug now': Lothians author speaks out about childhood of drugs and violence

I'm a medical doctor but I oppose Covid vaccine mandates like the one that affected Kyrie Irving. This is why