Sir Keir Starmer is using an opposition day debate in parliament to attack Boris Johnson over the escalating cost of living crisis. Working families face a squeeze on living standards “not seen for a generation” and the Conservatives are to blame, according to the party.

It is forcing a vote on the “effect of Government policy on the finances of working people” this evening.

The motion says MPs are worried about a cost of living crisis hurting Britons across the country.

Listing a series of concerns, the motion warns of: “a growing squeeze on living standards caused by the £1,040 per year reduction to universal credit, the rise in National Insurance Contributions for low and middle income workers, increases in council tax, the freezing of the personal income tax allowance from April 2022, the increasing cost of household energy bills, the highest petrol prices since 2013 and the potential for the largest rail fare increase in a decade, the fastest rise in private rental prices since 2008, successive above inflation increases in childcare costs, and rising prices resulting from the supply chain disruption caused by worker and supply shortages.”

MPs will vote on whether to endorse the motion in a vote at 7pm. 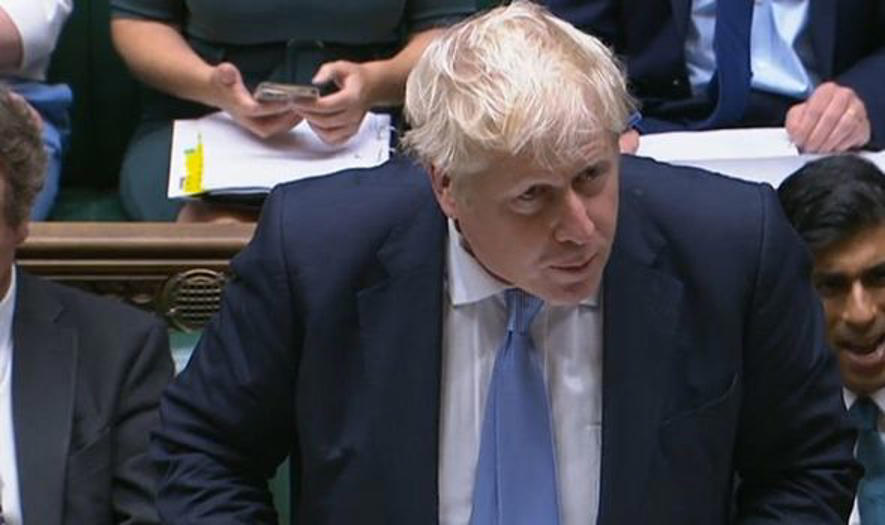 © PARLIAMENT.TV The Tories are to amend a Commons motion to praise the Government

However, in an unusual move, the Conservatives have tabled an amendment to the motion to reverse its meaning.

If the amendment is approved by MPs, the motion would praise the Government rather than criticise it.

The Tories are seeking to change the wording of the motion to praise the Government’s economic plan.

The new wording would say the House of Commons “welcomes the £400 billion package of support the Government has put in place to protect jobs, incomes and livelihoods throughout this covid-19 pandemic”.

It would also point to evidence on “unemployment forecast to be 2 million lower than previously expected, job vacancies at record highs, household incomes protected, consumer confidence back to pre-Covid-19 pandemic levels, and GDP recovering rapidly, with the IMF forecasting the UK to have the highest growth in the G7 this year”.

With the Conservatives holding an 80-seat majority in the Commons it is highly likely the amendment will pass. 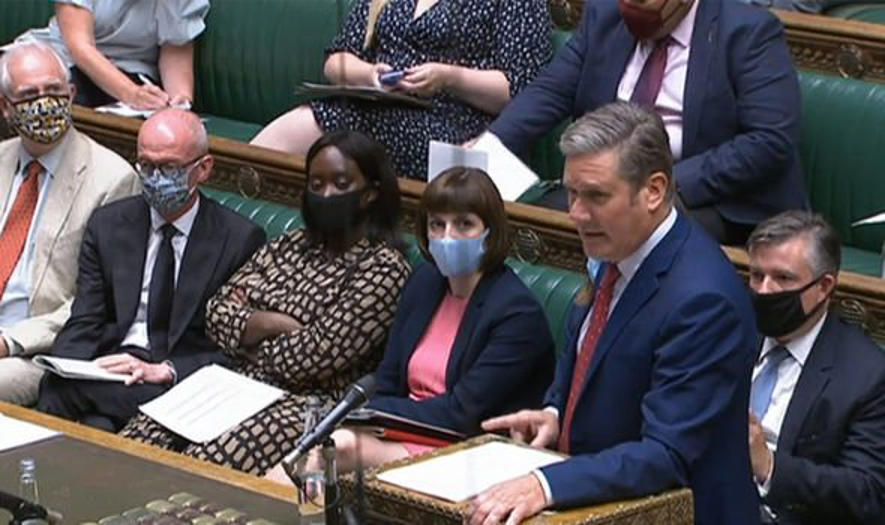 © PARLIAMENT.TV Labour’s motion would have criticised the Government for a cost of living crisis

The tabling of the amendment is irregular for the Tories under Boris Johnson.

In previous votes, the party has been ordered to abstain on Labour motions.

In a motion forced by Labour on the reversal of the £20 uplift to Universal Credit last Wednesday, Government whips ordered Conservatives not to vote. 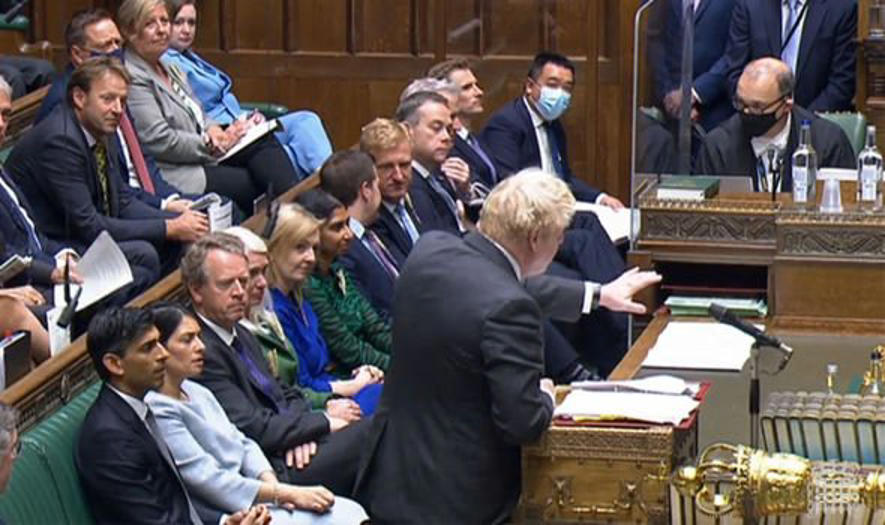 © PARLIAMENT.TV Tories have tabled an amendment to change the motion to praise the pandemic respons

Speaking in the Commons ahead of tonight’s vote, Labour’s shadow chief secretary to the Treasury Bridget Phillipson said: “In our country today working families face a sudden squeeze on living standards on a scale not seen for a generation.

‘And with empty shelves in too many shops, restaurants closing because of meat shortages, and now refrigerant shortages putting Christmas at risk, it isn’t just that people can afford less, there is also less to afford.

“The people of Britain face an extraordinary squeeze on their living standards this winter.

“Not simply by chance, but because of the choices made by Conservative governments, this year, last year, and in the 10 years before.

“Now it is not some tragic, unforeseeable series of unhappy accidents that brought us here today.

“It is a string of choices which this Government has made.”

Cop26 chance to win a ‘victory' for life on Earth but more action needed: Kerry

Biden Poised to Unveil Framework for Spending Deal Ahead of Trip

Shark Black Friday sale 2021: What to expect from the vacuum maker

Virals: Everton have 'made an approach' for starlet Yuri Alberto

Nostalgia over Enchanted Kingdom throwback photos as it marks 26 years

At a time of historic change, Virginia will elect a woman of color for the first time as lieutenant governor

© AP Images Winsome Sears, left, and Hala Ayala, right, are pictured on September 1, 2021 in McLean, Virginia. Virginia is primed to elect a woman of color as its ... Read more »

Speaking to the Beyond the Grid podcast, Jean-Eric Vergne has recalled the time he learned he was going to be replaced by Max Verstappen at Toro Rosso, a move that ... Read more »

Wales team to play All Blacks as Taine Basham starts

Wayne Pivac has handed Taine Basham an early birthday present with a place in the Wales team to face New Zealand in Cardiff this weekend. The youngster — who will ... Read more »

Forgotten Crystal Palace defender Nathan Ferguson provided fans with an update regarding his recovery on Tuesday. © Provided by Transfer Tavern 2019-12-11T212947Z_2020606949_RC29TD98BKEU_RTRMADP_3_SOCCER-ENGLAND-WIG-WBA-REPORT And it didn’t take long for a number ... Read more »

© Provided by Football League World Scottish Premiership – Rangers v Aberdeen Cardiff City have had a sub-par start to the campaign so far this year and it’s led to the ... Read more »

© Provided by Football FanCast Moore Sheffield Wednesday’s previous League One match saw them secure a third consecutive draw with a 1-1 result against Lincoln City at Hillsborough. Their next ... Read more »

Man jailed for attempting to murder soldier in violent rage

A man has been jailed after holding a soldier hostage in a flat and attempting to murder him. Dylan Rigby pleaded guilty to attacking 18-year-old Cobhan McLelland in a two-hour ... Read more »

© Provided by Pinkvilla The popular show One Mic Stand offers a unique concept of bringing influential people from different walks of life under one roof to try their hands ... Read more »

This year’s Ballon d’Or has been stirring up the headlines, with the eventual winner being more difficult to predict than previous years. However, a recent leak has allegedly revealed last ... Read more »

Manilyn Reynes IG Manilyn Reynes expressed her gratitude to everyone who had supported her as she celebrated her 39th anniversary in showbiz. On Wednesday, the actress and singer shared a ... Read more »

Full weekday services are to resume on a London Underground line for the first time since March last year, Transport for London (TfL) has announced. The Waterloo and City line ... Read more »

© Bang Showbiz Prince Jackson Prince Jackson was traumatised by the ‘Thriller’ video the first time he saw it. The iconic music video was released by his late dad Michael ... Read more »

Oct. 28—LONDONDERRY — Dale Levasseur will spend at least 19 years in state prison after pleading guilty Tuesday to a pattern of sexual assaults against two minors. The 48-year-old interrupted ... Read more »

A saying goes around, ‘Age is just a number’ and truly it is! A 63-year-old Instagram influencer, Ravi Bala Sharma proved it time and again. Here we are with her ... Read more »

Bathgate gymnast Megan Docherty has proven herself to be the best in Britain – but isn’t willing to stop there. The 16-year-old picked up the overall gold medal alongside a ... Read more »

Brexit: France releases list of possible sanctions it could impose against UK over fishing dispute

France has released a list of possible sanctions it could impose against the UK over a row involving issues with fishing licences. Read more »

Tanzeel Khan on creating his song 'Khwahish' from debut album

PARIS (Reuters) – The International Olympic Committee (IOC) will make a decision as early as possible on whether boxing and weightlifting will be at the Paris 2024 Games, president Thomas ... Read more »

© Provided by Pinkvilla As the episode starts, Dev arrives at Tripathis along with Anu and Meethi. Tripathis give them a warm welcome for them. Imlie comes running to meet ... Read more »

More than 1m British households may have been targeted by a scam in which sellers on Amazon Marketplace send unsolicited packages to addresses in order to artificially increase their sales ... Read more »

Ed Sheeran reveals how fatherhood has changed him

© Provided by Daily Mail MailOnline logo He welcomed his daughter Lyra with his wife Cherry Seaborn last year. And on Thursday, Ed Sheeran revealed how fatherhood has changed him and made his ... Read more »

The boss of Sainsbury’s has hinted that shoppers may have less choice when doing their food shopping this Christmas. The supermarket chief said that there should be plenty of food ... Read more »

© Provided by News18 Marcus Stoinis Reveals MS Dhoni’s Advice Which Was a Filter For Him in Training Australia all-rounder Marcus Stoinis opened up on his conversation with the former ... Read more »

Manchester City’s domination of the Carabao Cup is over after West Ham became the first team to beat them in the competition in five years. Pep Guardiola’s side were held ... Read more »

Over 90% people in Delhi have antibodies against COVID-19, shows sero-survey

© Provided by DNA While the coronavirus cases in Delhi have come down significantly, more than 90 per cent of people in the national capital have developed antibodies against the ... Read more »

Welcome to the United On My Mind daily round-up, where we take a look at some of the best Manchester United stories which you might have missed. It’s been a ... Read more »

© BCCI MS Dhoni and Eoin Morgan with the IPL 2021 trophy © BCCI A maximum of four players can be retained by the eight existing IPL teams while the ... Read more »

While it was a one-sided win for Pakistan in their opening T20 World Cup match against India last week on Sunday, Pakistan coach Saqlain Mushtaq feels if the two teams ... Read more »

An Archaeological Survey of India (ASI) team on Wednesday, October 27, unearthed the remains of an ancient temple. The temple is said to be a 10th-century shrine. The remains were ... Read more »

T20 World Cup: I will consider Ishan Kishan ahead of Hardik Pandya if he is not bowling, says Sunil Gavaskar

Cricket legend Sunil Gavaskar suggested two changes to the Indian team ahead of their crucial encounter against New Zealand in the Super 12s of the ICC T20 World Cup 2021 ... Read more »

2022 Ford Mustang Mach-E Review | Whatever the name, it's great

Biden to detail core elements of $1.75 trillion economic and climate package in effort to jumpstart action on the Hill