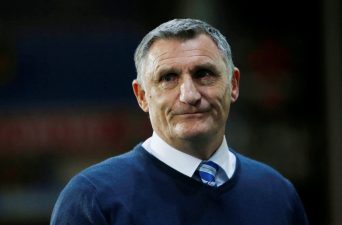 A trio of Blackburn Rovers defenders are facing a race against time to be fit for their away clash with Derby County this weekend, according to Tony Mowbray.

Three of the club’s key players this season in Ryan Nyambe, Daniel Ayala and Harry Pickering have not trained all week according to Mowbray, but if they get through the club’s final session on Friday before their trip to Pride Park then they will be available for selection.

Ayala is the one player that has had fitness issues throughout his career and it was a concern when he arrived at Ewood Park – and he only played 10 times in the Championship last season because of it.

The Spaniard had played every single minute of every league match so far this season though until he was withdrawn in the first half against Reading this past weekend, owing to a calf issue he picked up during the game.

The same injury occurred to left-back Pickering pre-match on Saturday, which forced his withdrawal and he was replaced by Tayo Edun.

Mowbray then suffered another blow on Saturday when flying wing-back Nyambe was forced off on the hour mark against the Royals, but it seems that there was no damage sustained to the hamstring and that it was more a bout of cramp that the Namibia international suffered.

All three defenders have a chance of facing Wayne Rooney’s side but it all depends if they come through tomorrow’s session unscathed.

Mowbray could really do with all three of his injured players being passed fit for the weekend – and if none of them are then there could be a disaster.

He has enough depth to cope with replacing them in the starting line-up but then if another player drops injured against the Rams then there would be major issues.

They coped well enough against Reading in the final half an hour with a much-changed defence and on paper Derby’s attack isn’t as strong as the Royals’, so Rovers may be able to get away with it just about if none of their doubts are passed fit.

On the flip side of things though it could give a chance for the likes of Jan Paul van Hecke and Hayden Carter to prove their worth to Mowbray if they’re given a shot from the start, so there’s a lot to ponder for the Rovers management team ahead of the weekend.

No love lost between Verstappen and Hamilton ahead of Dubai showdown

Video: Georgia Fowler shows off her post-baby body as she trains with a resistance band - after welcoming three-month-old daughter Dylan

Ralf Rangnick has indicated he will make significant changes to the Manchester United team against Young Boys in their final Champions League group game on Wednesday. United have already won ... Read more »

India have a problem of plenty for their South Africa tour

© Provided by Independent Online (IOL) By Sudipto Ganguly Mumbai – India face a problem of plenty for their upcoming trip to South Africa having beaten New Zealand at home ... Read more »

Enzo Fittipaldi is awake and alert in hospital after being involved in a horror crash with Theo Pourchaire at the F2 Saudi Arabian Grand Prix on Sunday. Both drivers were ... Read more »

© Provided by Football League World FA Cup Fifth Round – Portsmouth v Arsenal Portsmouth will be looking to bounce back from their shock FA Cup exit at the hands ... Read more »

Aston Villa have less than four weeks left to map out their January transfer plans before the window opens at the start of next month. Here are your Villa transfer ... Read more »

‘Our best player today', ‘Not good enough' – Many QPR fans debate one player's performance against Stoke

Manchester United have 'failed transfer' who's now hugely impressing, and it's not Fred

Manchester United supporters are bouncing at the moment after the 1-0 victory over Crystal Palace. Although it wasn’t the most vintage win, fans will be delighted that the new interim ... Read more »

The College Football Playoff Is Set: Alabama vs. Cincinnati; Michigan vs. Georgia

The College Football Playoff Is Set: Alabama vs. Cincinnati; Michigan vs. Georgia The 2021 semifinal will likely feature familiar characters from the SEC in Alabama and Georgia, plus two teams ... Read more »

If you’ve been following the drama tornado that has made a mess of Oregon sports over the past couple of days, you’re going to want to take a second and ... Read more »

Big companies underpaid £35.8billion in tax last year, HM Revenue & Customs fears.  This is a jump of £1billion on the previous year, according to analysis from law firm Pinsent ... Read more »

Business groups have called on the Government to spend more on research and make it easier for manufacturers to access funding after the emergence of the Omicron variant.  The Confederation ... Read more »

© Provided by The South African Screenshot-1-1 The South African Football Association (SAFA) said in an official statement that it would consider its options after FIFA dismissed its protest regarding ... Read more »

Lewis Hamilton escalated his war of words with Max Verstappen after he accused his Formula 1 title rival of going “over the limit” at a chaotic Saudi Arabian Grand Prix ... Read more »

(AFP via Getty Images) One word cropped up during Ralf Rangnick’s unveiling as Manchester United’s new interim manager more than any other: ‘control’. “Football, for me, is to minimise the ... Read more »

Tyson Fury has threatened legal action against the BBC if he is included on the shortlist for Sports Personality of the Year.   © GETTY IMAGES Tyson Fury threatens legal action ... Read more »

UTAH (REUTERS) – The United States set a world record to win the men’s team pursuit at the speed skating World Cup in Utah on Sunday (Dec 5) in a ... Read more »

Notre Dame football fans continue to pound Brian Kelly since his surprising move to Louisiana State University, but a contract worth more than $100 million proved too tempting for the ... Read more »

People from around the world confessed why they hate their step-parents Posting on Whisper, many said they felt compared to their biological childrenA woman, from England, claims her stepdad bullied her throughout childhoodAnother, from the US said her stepdad won't accept her as his daughter   Read more »

Mother, 34, dies hours after giving birth to her third child after suffering a haemorrhage caused by a condition linked to having multiple C-sections

Mum-of-three, Hayley Roberts, 34, bled to death after her third C-sectionShe suffered from the high-risk pregnancy complication, placenta percretaHayley's mum Jackie George, 63, from Wirral, Merseyside, is raising awareness of the condition and the dangers of repeat Caesareans Read more »

He is understood to have lost a staggering 10kg since recovering from surgery for a lacerated kidney back in July. And AFL Richmond Tigers superstar Dustin Martin drew attention to ... Read more »

Video: Chris Hemsworth 'guarantees' he will travel to Cowra and wants to see 'The Big Chris' statue come to life - after the regional NSW town launched a cheeky campaign encouraging him to visit

Lewis Hamilton has insisted he’s relaxed about his chances of winning another F1 Drivers’ Championship amid his fierce rivalry with Max Verstappen. The Brit boosted his hopes of claiming the ... Read more »

India’s spinners wasted little time in removing New Zealand’s remaining batters on Monday as the hosts sealed a record 372-run victory in the second Test at the Wankhede Stadium to ... Read more »

Manchester United have joined the race to sign Barcelona midfield star Frenkie De Jong, but will have to adjust their valuation of the player, according to reports close to the ... Read more »

Alesi gets full-time Super Formula and GT500 promotion at TOM'S

Video: Lewis Hamilton wins a chaotic Saudi GP to draw LEVEL with Max Verstappen heading into F1 season finale... after Brit ran into the back of the Dutchman when he had been instructed to let him pass

Scam warning as Britons could lose everything they've saved for retirement

FTSE 100 gains after choppy week with oil stocks in lead

Davis Cup format gets another tweak, but ITF stays mum over Abu Dhabi as possible venue for final