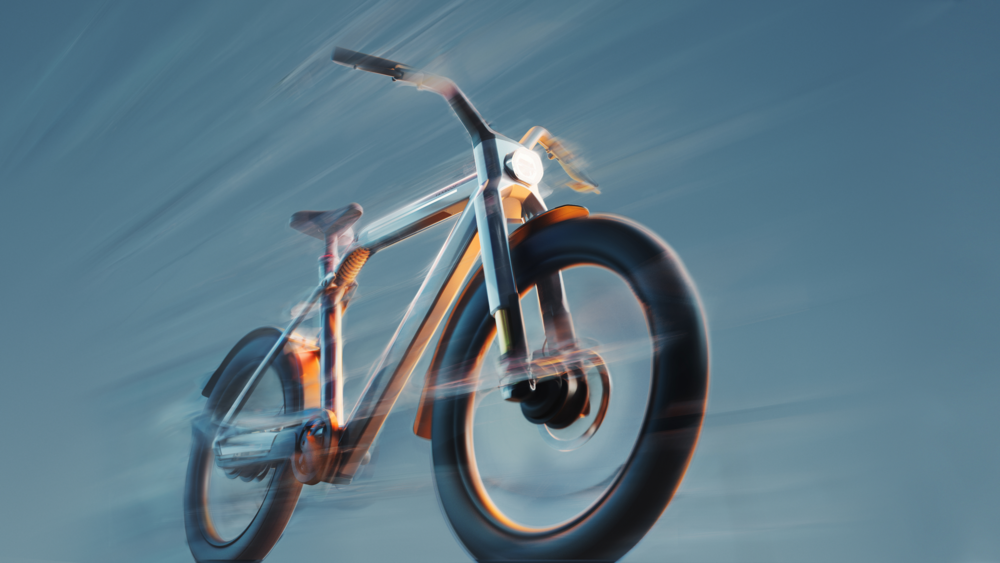 Dutch e-bike company VanMoof has announced an e-bike that can hit a top speed of up to 31mph – in theory, at last. The VanMoof V is intended to replace cars for long commutes in cities, and is scheduled for release late next year.

The company has only released artists’ impressions so far, but the VanMoof V will feature front and rear suspension, thick tires and a new futuristic design. VanMoof has said that the new dual motors will provide powerful acceleration, with adaptive motor control that responds to riding conditions for enhanced traction for safety and performance.

Analysis: the VanMoof V will probably be limited

It’s interesting that VanMoof is putting so much emphasis on the Vanmoof V’s ability to hit 31mph, considering the top speed for an e-bike is 12.5mph in the UK and EU, and 20mph in the US.

VanMoof has said that the new bike will reach “up to 31mph depending on local regulations and how the bike is registered,” which would mean the company will be limiting the speed of its e-bike according to the laws of the countries where it’s sold – and will therefore never hit its maximum possible speed. The e-bike will have a system in place that cuts out the motor when traveling faster, which will make it much the same as any other e-bike.

VanMoof is calling out different countries to change their laws on e-bikes – a step in reversing the car-first mentality of modern-day cities. But for now, no change is happening, so whoever pre-orders the hyperbike will be paying a premium price for speed they can’t use.

Its hard to say whether the other features of the VanMoof V like automatic gear shifting justify its premium price point. It may be better to look around first for other e-bikes before pre-ordering the VanMoof V.

Zoom adding this useful feature for Windows and MacOS users

COVID: will the UK vaccinate children under 12?

Give Netflix your phone number to REALLY secure your account

A powerful and underappreciated ally in the climate crisis? Fungi

Follow our restock tracker blog for all the latest updates (iStock/The Independent) The Series X is now over 12 months old and the next-generation console has been breaking sales records ... Read more »

Honor 50 | Photo credit: HONOR / YouTube screenshot The Honor 60 series is still hours away from getting launched, but its technical specifications and design details have already leaked. ... Read more »

Huawei was one of the early companies to introduce a foldable smartphone for the general public when it revealed two such devices — Huawei Mate X and Mate Xs. The ... Read more »

Piers Corbyn‘s political party have filmed an anti-mask song on the London underground about keeping a fart in your trousers. Mr Corbyn is filmed walking through the train with his ... Read more »

Microsoft has finally introduced the Xbox Stereo headset for the Indian market. Xbox has now made some crucial upgrades in the accessories section as well after enjoying success with the ... Read more »

Douyin, the Chinese version of TikTok, is testing a new business model involving paid short dramas, a departure from the free, user-produced content that has made the short video platform ... Read more »

SINGAPORE – The national SMEs Go Digital programme that encourages companies here to digitalise has attracted 78,000 small and medium-sized enterprises (SMEs) since its 2017 launch, with more than half, ... Read more »

Here's how much Parag Agrawal will earn as CEO of Twitter

China‘s Ministry of Industry and Information Technology (MIIT)called for improved cross-border security management of big data till 2025, in a five-year plan published on Tuesday. The plan, which builds off ... Read more »

Edtech platform Adda247 on Tuesday said it has raised around USD 20 million (about Rs 150 crore) in a funding round led by WestBridge Capital. The Series B funding round ... Read more »

Many players want an option to disable crossplay Halo Infinite has become the latest game to fall victim to an influx of hackers and cheaters, that are ruining online competitive ... Read more »

Apple Store gift cards can be purchased via Amazon in India. The iPhone maker is offering App Store gift cards in various denominations via the e-tailer’s site. The price of ... Read more »

Some Cyber Monday graphics card deals still remain even with the big day nearly done. The good news is that if you held off on shopping until now, you didn’t ... Read more »

Oppo Reno5 | Photo credit: Anh Nhat / Unsplash More companies are expected to introduce their take on foldable smartphone technology within the next year, and Oppo is likely to be one of ... Read more »

(Image Courtesy: Google) Google has announced its annual list of the best apps on Android’s Play Store for 2021. The list is curated based on India’s top app as voted ... Read more »

Hyundai E&C to begin sales of Hillstate apartments in Pyeongtaek

An apartment complex is under construction in the Thatluang Lake Special Economic Zone of Laotian capital city Vientiane. (Jungheung Group)Laos is fast emerging as a land of opportunity for land ... Read more »

Amid the global transition to electric vehicles, EV makers are moving fast to set up charging infrastructure in Korea not only to increase their sales but to gain dominance in ... Read more »

Vivo introduced its latest Android-based mobile OS named OriginOS in 2020 to succeed it’s old FuntouchOS. Gizmochina reports that the Chinese smartphone maker has revealed that it will introduce the ... Read more »

SEOUL, Nov. 30 (Yonhap) — The National Assembly on Tuesday approved a revision to the Income Tax Act that calls for easing a threshold of capital gains tax exemption on ... Read more »

How my startup completely transformed its revenue model

Building and scaling a startup inevitably involves revisiting and changing some aspects of your approach. But one of the most daunting pivots to make is your own revenue model. If ... Read more »

Samsung is reportedly working on a new Galaxy A series phone — Galaxy A23. Alleged camera details of the smartphone have appeared online. As per a report by GalaxyClub, the ... Read more »

Realme 9i tipped to launch in January next year, may come with this chipset

Launch timeline of Realme 9i has leaked online. According to a report, the smartphone may launch in the month of January next year. The report says that the handset could ... Read more »

Elizabeth Holmes tells court her ex-boyfriend forced her to have sex with him as lawyers cite emotional abuse Former entrepreneur and Theranos founder Elizabeth Holmes said in court on Monday ... Read more »

The one thing you must do to stop greasy hair

Watch: Viral hairbrush cleaning hack could explain why your hair gets so greasy We know we should be washing our hair regularly to keep it clean, but turns out our ... Read more »

Samsung Galaxy S21+ | Photo credit: Anh Nhat / Unsplash Recent leaks about the Samsung Galaxy S22 series have been focused on the Ultra model, and they suggest a slight improvement in the ... Read more »

Do lateral flow tests detect the Omicron variant? What we know so far

Why sustainability and digitization go hand in hand

5 in 10 Indian workers say they're more productive from home: Report

The sales go on! These top-rated Bluetooth speakers are up to $65 off at Amazon, today only