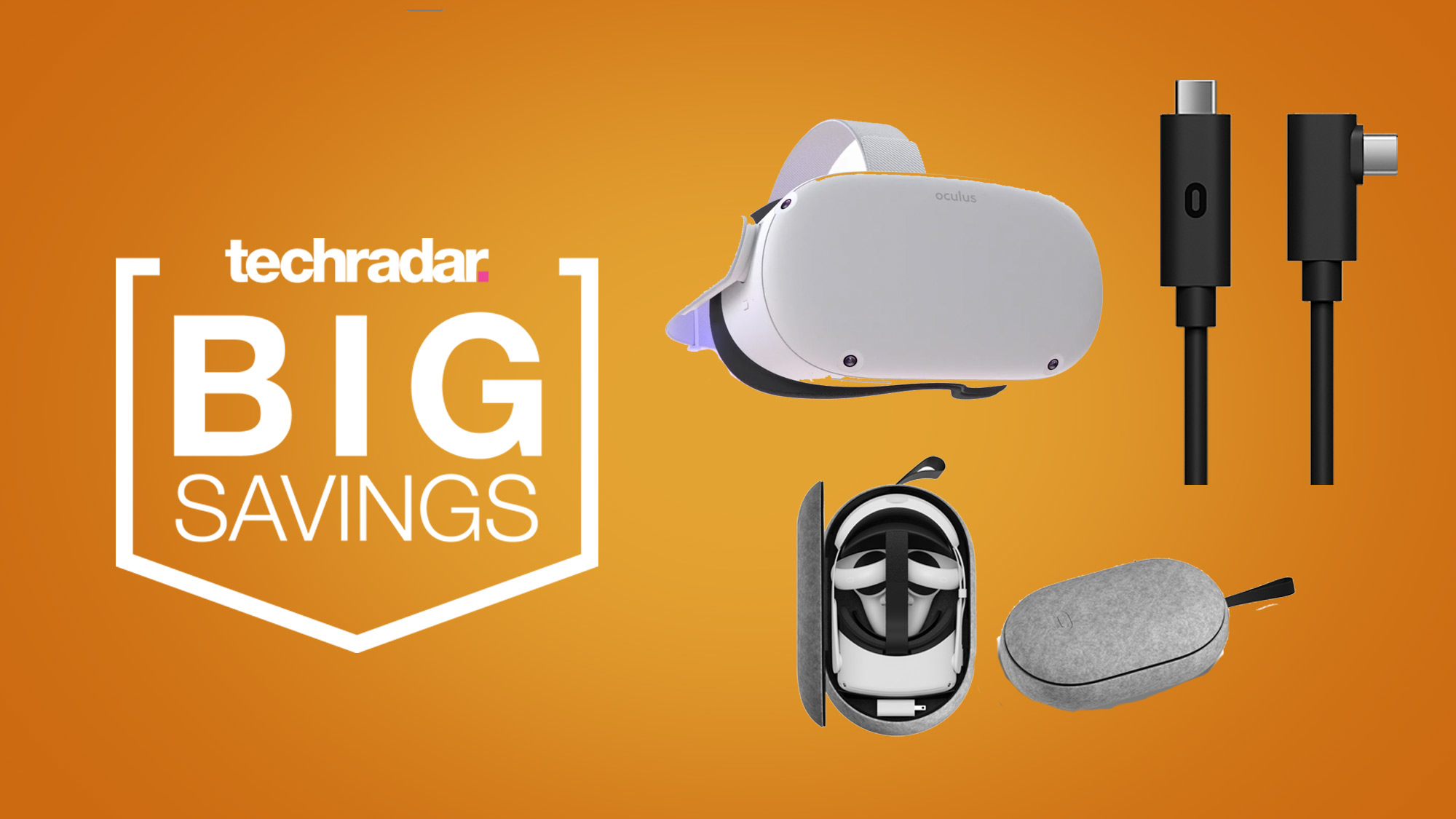 A selection of official Oculus Quest 2 accessories including the Elite Strap, Carrying Case, and Oculus Link Cable are reduced in both the US and UK.

The discounts are fairly small but do drop the prices of these useful extras to their lowest ever prices. That makes them some of the best Oculus Quest 2 deals available today if you already own the highly-rated VR headset.

To go into some specifics, possibly the most-wanted Oculus Quest 2 accessory is the Elite Strap. This premium headband will give you a more comfortable and stable experience while using the VR headset. It usually retails for $49/£49 but is now discounted to $39 in the US and £35.99 in the UK. A version with a battery pack is also on offer that can double your playtime before needing to recharge. It’s down to $99 (was $109) or £79 (was £99).

There are two other two Oculus Quest 2 accessory deals available today. The first is on the handy Carrying Case, which is now $39 in the US and £35.99 in the UK. That represents a saving of $10/£13, and the cheapest ever deal in either region. This durable protective shell comes with space to store the headset, controllers, charging cable, and power adapter. There’s also additional room for the Elite Strap and Battery Pack should you decide to pick up that accessory too.

Lastly, there’s the Oculus Link Cable. It’s reduced by $10 to $69 in the US and cut by £13 to £75.99 in the UK. As a heads up, it’s been cheaper in both regions in the past, falling as low as $49.95/£49.99 over a year ago. As for why you’d want this: it allows you to connect the Oculus Quest 2 headset to your gaming PC to access other titles from the Rift library that need a dedicated machine to be played.

Oculus Quest 2 Elite Strap: $39 at Amazon
Save $10 – This is the best price we’ve seen for the accessory that’s designed to offer a more comfortable experience when using the Oculus Quest 2 for extended periods with improved balance and support. A version with a battery pack is also available that will double your playtime when using the VR headset.

Oculus Quest 2 Carrying Case: $39 at Amazon
Save $10 – Another Oculus Quest 2 accessory down to its cheapest ever price. There’s room in this official Carrying Case to store the VR headset and pair of controllers, along with a charging cable and adapter. If you decide to pick up an Elite Strap with or without Battery Pack now or further down the line, there’s a spot for those too.

Oculus Link Cable: $69 at Amazon
Save $10 – This handy Oculus Quest 2 accessory has been $20 less in the past, but that was over a year ago. This is the lowest price since. If you want to connect your VR headset to a gaming PC to play other VR titles that require a dedicated machine, this is what you need.

Oculus Link Cable: $69 at Amazon
Save $10 – This handy Oculus Quest 2 accessory has been $20 less in the past, but that was over a year ago. This is the lowest price since. If you want to connect your VR headset to a gaming PC to play other VR titles that require a dedicated machine, this is what you need.

Oculus Quest 2 Elite Strap: £35.99 at Amazon US
Save £13 – Here’s the cheapest price ever for the Oculus Quest 2 Elite Strap. This makes the VR headset more comfortable and stable when in use for extended periods of time. You’ll get a better overall experience with improved balance and support. If you want to play without charging as often, there’s also a version with a battery pack that will double your playtime.

Oculus Quest 2 Carrying Case: £35.99 at Amazon
Save £13 – This is another Oculus Quest 2 accessory that you can now buy for its lowest ever price. With the official Carrying Case, you can store all components safely, whether you want to take the VR headset with you somewhere or just store it away after gaming. Inside, you will find room for the VR headset, pair of controllers, charging cable and adapter. There’s also space for the Elite Strap and Battery Pack if you buy them at the same time or at a later date.

Oculus Link Cable: £75.99 at Amazon
Save £13 – We’ve seen this Link Cable for as low as £49.99 in the past but that was a whole 12 months ago. Since then it hasn’t been any cheaper than the price available today so a rare discount indeed. With this you can connect your Oculus Quest 2 to a souped-up gaming PC and play other VR titles that require a dedicated machine, including some older Oculus Rift classics.

For more info on the world of VR gaming do check out our guide to the best VR headsets and all the info about the upcoming PSVR 2 for PlayStation 5. Should you wish to try it for yourself, you can always find the cheapest VR headset deals right here, including any PSVR 2 deals as and when the new headset launches.