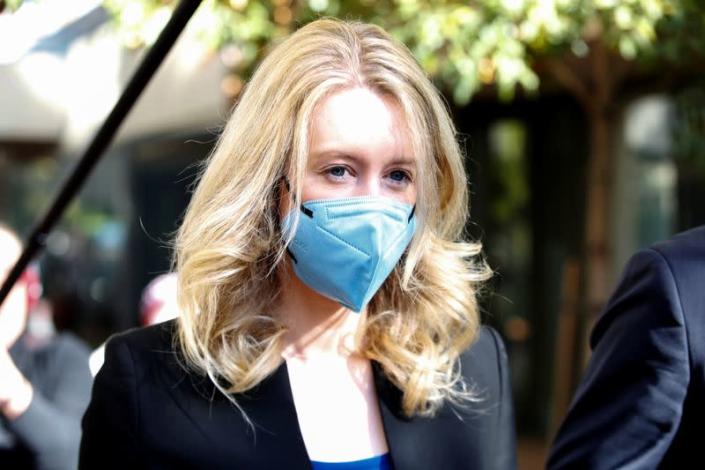 SAN JOSE, Calif. (Reuters) – Theranos founder Elizabeth Holmes finished testifying in her own defense against fraud charges on Wednesday morning, telling jurors that investors “weren't interested in today” but focused on the blood-testing startup's impact in the long-run.

Holmes, 37, faces nine counts of fraud and two counts of conspiracy for allegedly lying about Theranos' technology to bring in cash from wealthy private investors and patients who paid for tests from the company.

Holmes rose to fame in Silicon Valley for her ambitious play to reinvent blood testing with a device that supposedly could perform a diagnostic analysis from a finger prick.

Once valued at $9 billion, Theranos collapsed after the Wall Street Journal published a series of articles, starting in 2015, that suggested its devices were flawed and inaccurate.

During her final moments on the stand, Holmes said that she had sought to communicate the future promise of the company to long-term investors.

“I wanted to convey the impact the company could make for people and for healthcare,” Holmes said. “They weren't interested in today, tomorrow or next month.”

Neither Holmes' attorneys nor prosecutors called further witnesses on Wednesday. Jurors will hear closing arguments on an unspecified date.

U.S. District Judge Edward Davila said that he needs time to hear arguments from the parties about the legal instructions he will give jurors, and that deliberations in the case could begin as late as January, depending on jurors' holiday plans.

About 12,000 students to be deployed across NHS to tackle pandemic

The “Boris bus” may have to be taken off the road unless Transport for London’s long-term financial crisis can be resolved, City Hall said on Monday. © Provided by Evening ... Read more »

_To celebrate the future made possible today, thanks to BMW, Clement Manyathela is chatting to industry experts about innovative sustainable technologies and electric driving. In part 4 of the Front ... Read more »

Anne Frank may have been betrayed by Jewish notary

A Jewish notary has been named by a cold case team led by a former FBI agent as the prime suspect for the betrayal of Anne Frank and her family ... Read more »

China says it posted 8.1% GDP growth last year, and 3 other key takeaways from the country's most recent data dump

Alfa Romeo team principal Vasseur will reunite with Bottas for the 2022 season upon his move from Mercedes. Vasseur previously worked with Bottas at his ART Grand Prix squad in ... Read more »

A year after arrest, Navalny says no 'regret' about return to Russia

The Kremlin’s most prominent critic Alexei Navalny said Monday he did not regret returning to Russia a year ago, despite his jailing and a historic crackdown on the opposition. © ... Read more »

© Motivate Publishing Abu-Dhabi-pic-1 (1) The Abu Dhabi Police has confirmed that a fire broke out this morning, which led to the explosion of three petroleum tankers in ICAD 3, ... Read more »

EASTENDERS viewers all have the same question about Ben Mitchell after he suddenly decided to hide being gay. The mechanic – who is played by actor Max Bowden in the ... Read more »

Are you bored of drinking water all the time? Here's what you can drink for better health

© Provided by Independent Online (IOL) Are you bored of drinking water all the time? Or maybe you’re hoping to avoid sugary drinks? Below we share some drinks you can ... Read more »

Mohamed Salah has applauded Philippe Coutinho after his brilliant debut against Manchester United for Aston Villa. The Brazilian has already made an instant impact back in the Premier League in ... Read more »

ANTI-vaxxer Novak Djokovic's Covid stance could ruin his career as he faces being banned from the French Open. The French health ministry has announced vaccine passes will be required for ... Read more »

© Provided by Dot Esports VALORANT is a tactical shooter with a twist. A cast of characters—known as agents—add distinct flavor and personality to the game, each bringing along a ... Read more »

© Instagram angelaglover170122 A British woman has been reported missing after she was caught in a tsunami in Tonga. Animal charity worker Angela Glover, 50, has not been seen since ... Read more »

The continued drop in UK Covid cases indicates the Omicron wave may well be “turning around”, a leading expert advising the Government has said. Prof Mike Tildesley, from the University ... Read more »

Former president Poroshenko returns to Ukraine to appear in court

Former Ukrainian president Petro Poroshenko has returned to face court on treason charges he believes are politically motivated. After arriving at the Kyiv airport from Warsaw on Monday morning, Poroshenko ... Read more »

© A police vehicle sits outside of the Congregation Beth Israel Synagogue in Colleyville, Texas, some … A British man has been shot dead after he flew to the US, ... Read more »

© Karwai Tang – Getty Images Prince Harry is asking British courts to grant him permission to pay for police protection for his family during trips to the UK. Prince ... Read more »

Eammon Holmes has claimed that he was given ‘no reason’ for his sudden exit from ITV’s This Morning. The presenter, who helmed the ITV morning show with his wife Ruth ... Read more »

Arsenal’s statement confirming the postponement of yesterday’s north London derby described the club as “disappointed” to relay the news to fans. Given they requested the delay and lobbied the Premier ... Read more »

© Provided by Cover Media Robbie Williams Robbie Williams has sensationally claimed a hitman was hired to kill him at the height of his fame. The former Take That frontman ... Read more »

Roy Keane has asked questions about the culture at Manchester United after Cristiano Ronaldo pulled no punches in a recent interview. Ronaldo offered some tough love to his younger teammates, ... Read more »

A Cabinet minister has dismissed suggestions that there is a concerted effort to save the Prime Minister from censure over the partygate scandal. Education Secretary Nadhim Zahawi said he does ... Read more »

Many of our favourite Zalebs are always making headlines for their juicy scandals that always set tongues wagging. These feuds always end up with most, if not all, of these ... Read more »

Naomi Osaka delivered a ‘perfect’ response to reporters when questioned on the Novak Djokovic deportation debacle which has consumed media attention throughout the last couple of weeks. Djokovic was initially ... Read more »

senate thumb The Senate on Monday approved on third and final reading the bill which seeks to criminalize “hoax ordering” in a bid to protect delivery riders from bogus transactions. ... Read more »

Dancing On Ice fans were thrilled to see a Celebrity Gogglebox star cheering on Bez as he skated his first dance last night. Happy Mondays star Bez sailed through to ... Read more »

© Provided by The Guardian Photograph: NomisH/Alamy The Garden The issue of great Jove, draw near, you Muses nine! Help us to praise the blissful plot of garden ground so ... Read more »

AFL CLUB GEELONG Cats say they “respect” the decision of Oisín Mullin, while wishing the Mayo star well in the future. News broke on these shores last night that the ... Read more »

Ramaphosa: South Africans must guard against efforts to diminish democracy

Meta's VR division is reportedly under investigation by the FTC

As Omicron sweeps the country, New York state offers a glimmer of hope

Anushka Sharma kicks off her Monday with a workout, shells out inspiration with her 'sweaty selfie'

Little girl, 5, killed in horror crash as schoolgirl, 8, and man and woman hurt after BMW and Land Rover smash