Manchester City crashed out of the Carabao Cup on penalties following a goalless draw with West Ham United last night. Having won the competition for the last four years running, there is some relief that there will be a new winner for the first time since 2017.

Just over five years to the day since their only previous League Cup defeat under Pep Guardiola, a 1-0 loss at Old Trafford, their incredible unbeaten streak in the competition came to an end. The run spanned 21 games and is the first time anyone has lifted the trophy in four consecutive years since Liverpool, from 1981-1984.

When a team has such a stronghold over a trophy, it’s often forgotten who else has tasted Carabao Cup glory. The four City victories were all against different finalists: Tottenham, Aston Villa, Chelsea and Arsenal, with the final against Chelsea in 2018-19 being decided on penalties.

One of three trophies that Jose Mourinho won in his first season as Manchester United boss, the dramatic 2017 final saw the Red Devils narrowly beat Southampton 3-2.

Claude Puel’s side were impressive throughout the game, with January signing Manolo Gabbiadini scoring both of their goals, and having one controversially ruled out, before Zlatan Ibrahimovic headed in a late winner.

Southampton were the first team since 1982 to reach the final without conceding a single goal and knocked Arsenal and Liverpool out in the process.

“This is what I came for, I came to win”#OnThisDay in 2017, Zlatan Ibrahimovic scored 2 goals as Manchester United won the League Cup against Southampton. pic.twitter.com/2JYGhsrgHu

Going all the way back to 2015 means that this was yet another Jose Mourinho victory, in a 2-0 win over Tottenham Hotspur in the final.

Goals came from John Terry and Diego Costa in a fairly routine victory, where the only scare came in the 10th minute when Christian Eriksen rattled the crossbar from 25 yards out. Mourinho’s Blues also went on to win the Premier League that season.

Michael Laudrup’s Swansea City side won the hearts of neutrals throughout the 2012-13 season, and had silverware to show for it. With cult hero Michu, and the likes of Pablo Hernandez, Nathan Dyer and Ashley Williams, the Welsh side ran out 5-0 winners over League Two underdogs Bradford City.

This was one of the craziest League Cup campaigns to date. Then named the Capital One Cup, Bradford City had knocked out Premier League opposition in Wigan, Arsenal and Aston Villa en route to the final, whilst Swansea knocked out Liverpool and Chelsea.

Swansea’s semi-final victory over Chelsea was also notorious for a red card shown to Eden Hazard for kicking a ball boy.

The final was not free of drama either. Having already scored two in the game, Nathan Dyer had a chance to complete a hat-trick when Swansea were awarded a penalty in the 59th minute, but Jonathan De Guzman was adamant he would take it, causing a heated argument between the two.

De Guzman took it and scored, and at full time both players had forgotten their rift in the celebrations as the club lifted their first major trophy. The runners-up are arguably just as memorable as the winners, though… 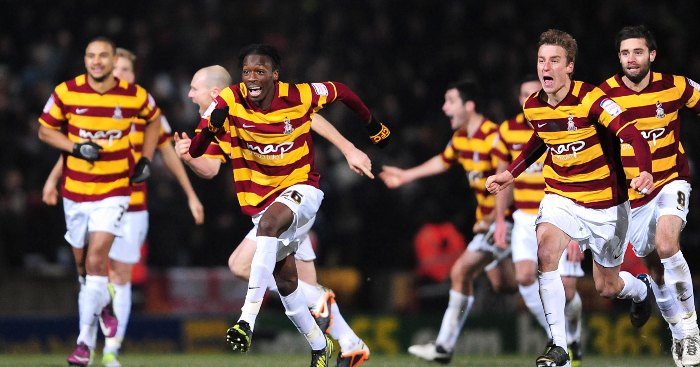 In another dramatic final with lower league opposition, Kenny Dalglish’s Liverpool beat Cardiff City on penalties following a 2-2 draw. Liverpool had beaten Chelsea and Man City on the way to Wembley, whilst Cardiff managed to avoid all top-flight opposition until the final, beating Crystal Palace in the semi-final.

Martin Skrtel and Dirk Kuyt thought they had secured a comeback victory for Liverpool after Joe Mason’s opener, before Ben Turner sparked wild celebrations with his 118th-minute equaliser to send the game to penalties.

Liverpool captain Steven Gerrard missed his penalty in the shootout, but it was his cousin Anthony Gerrard who missed the final spot-kick, meaning Liverpool secured a 3-2 win over Malky Mackay’s Bluebirds.

Birmingham City, who would go on to be relegated from the Premier League that season, secured a shock victory over heavy favourites Arsenal.

A side featuring Ben Foster, Nikola Zigic and former Gunners Seb Larsson and Alex Hleb (who missed the final through injury) came up against an Arsenal side aiming to end a five-year trophy drought.

Birmingham took an early lead through Zigic before Robin Van Persie scored a stunning equaliser, but it was the team in blue who had the last laugh.

A mix-up between goalkeeper Wojciech Szczesny and defender Laurent Koscielny meant that in the very last minute of the game, Obafemi Martins was able to roll the ball into an empty net and break Arsenal hearts.

Winning the trophy meant that Birmingham competed in the Europa League the following season, despite playing in the Championship.

Birmingham beat Arsenal to win the League Cup thanks to Obafemi Martins.

Look at the limbs #BCFC

Can you name the top Premier League goalscorer for every nationality?

Nani, Manchester United, and the unfair portrayal of a ‘frustrating’ talent

Where are they now? A ‘new Lionel Messi’ for every year since 2006

© AFP via Getty Images Patrick vieira dec 21 Patrick Vieira says his Crystal Palace side were not “brave enough” on the ball as they slipped to defeat at Manchester ... Read more »

The third round of the FA Cup will soon be upon us as clubs from the Premier League and the Championship enter the competition. Aston Villa, Wolves, Birmingham City and ... Read more »

Why Lalela Opts For Second Hand Clothing For Miss Universe

Miss South Africa Lalela Mswane is gearing up for Miss Universe which will be held in Israel in a few days. As part of her role as Miss Universe contender, ... Read more »

Abu Dhabi Grand Prix 2021: What time is the F1 race, what TV channel is it on and what are the odds?

Abu Dhabi Grand Prix 2021: What time is the F1 race, what TV channel is it on and what are the odds? – AFP Sky Sports is under major pressure ... Read more »

F1 title permutations: Lewis Hamilton can beat Max Verstappen at the season-finale in Abu Dhabi and STILL lose the championship, while it's the Dutchman who holds the advantage should neither finish... but the Brit has all the momentum with one race to go

Lewis Hamilton and Max Verstappen are level on points with one race remaining The season will come to a thrilling finale next weekend at the Abu Dhabi GP Hamilton drew level at the top after winning a frantic race in Saudi Arabia But who would win the title if neither driver score a point in the final race?  Read more »

© Provided by Daily Mail MailOnline logo The BBC have officially announced their Sports Personality of the Year’s World Sport Star of the Year nominees.  This year’s nominees include Saul ‘Canelo’ ... Read more »

Campbell Hatton has maintained his unbeaten streak in his fledgling career with a triumph against Attila Csereklye in Spain – but stated his knockout was an ‘accident’. Campbell, the son ... Read more »

A former world boxing champion has denied being involved in a mass brawl in which one man was stabbed through the hand in the Midlands. Billy Joe Saunders has taken ... Read more »

© Provided by dw.com Olaf Scholz (l) presented the SPD ministers on Monday The next German Chancellor Olaf Scholz threw a number of minor surprises as he nominated the Cabinet ... Read more »

BUSANI NGCAWENI: Professionalisation of the public sector must be sped up

© Catherine Rice/Eyewitness News Scores of Zimbabweans wait outside Home Affairs in Cape Town on 29 December 2016. OPINION Across the world, governments are continually seized with the issue of ... Read more »

Tyson Fury has vowed to take legal action against the BBC if he is named on the shortlist for the Sports Personality of the Year award this year. The world ... Read more »

Football is all about the glory. It has to be about success, medals and trophies. That is why my choice to win the Reach Fans’ Footballer of the Year 2021 ... Read more »

Ngadeu a disputé ... 33 matchs entiers : "Me reposer ? On a quelques jours en janvier"

© Charly Lopez / Motorsport Images Claudia Hurtgen, Mattias Ekstrom, ABT CUPRA XE Unlike most conventional racing or rallying, teams have no prior experience of the locations nor access to ... Read more »

The sea change began inside the first four minutes. Manchester United won two corners and forced the first error on Crystal Palace inside their own third. Then in the sixth ... Read more »