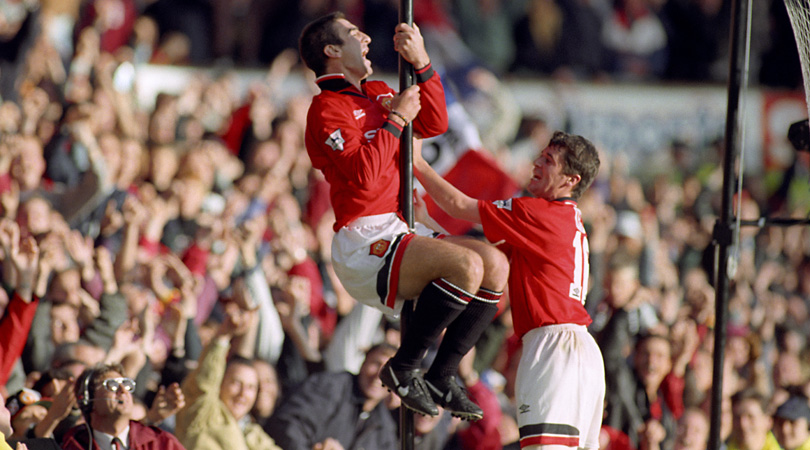 With the league title secured and a European Cup final to follow, Liverpool were odds-on favourites to lift the FA Cup at Wembley – even among Man United players.

“We weren’t confident,” forward Stuart Pearson admitted. “We knew we’d give them a game but they were so good.”

WATCH THIS WEEKEND’S GAME Manchester United v Liverpool live stream and best betting odds: How to watch the Premier League from anywhere in the world

But who needs confidence anyway? On the day it was United who prevailed in a thrilling final won by Lou Macari’s deflected effort after Jimmy Case had cancelled out Pearson’s opener.

READ NEXT Pain, poverty, bribery and glory: the extraordinary rise of Roberto Firmino

United found themselves in desperate need of three points when they arrived at Anfield in April 1988, trailing Kenny Dalglish’s league leaders by 11 points.

Skipper Bryan Robson gave the visitors a perfect start, but devastating spells either side of the break ended up with Liverpool 3-1 up via goals from Peter Beardsley, Gary Gillespie and Steve McMahon.

Colin Gibson’s dismissal looked like it would compound United’s misery, but a late rally produced strikes from captain Robson and Gordon Strachan to level the scores. United’s fiery-haired Scot celebrated his last-gasp equaliser by puffing on an imaginary cigar in front of an outraged home support.

United, champions of England for the first time in 26 years and beginning their period of domination, raced into a 3-0 lead after just 25 minutes of this all-time classic.

Going into the game United were enjoying a 17-game unbeaten run in the league, 21 points ahead of Graeme Souness’s ninth-placed Liverpool. So it was no surprise when goals from Steve Bruce, Ryan Giggs and a sumptuous Denis Irwin free-kick launched the hosts into a commanding lead.

But in a remarkable comeback, Liverpool’s Nigel Clough grabbed a brace before Neil Ruddock completed the turnaround with just 11 minutes remaining.

A clash of two icons… and Razor Ruddock. Eric Cantona, returning from his suspension for kung-fu kicking Palace fan Matthew Simmonds at Selhurst Park, found his feet immediately and sent in a pinpoint cross for Nicky Butt to score after two minutes.

But, as luck would have it, Liverpool had a legend of their own on form that day with Robbie Fowler bagging two terrific goals to nudge the visitors on course for victory.

Unwilling to relinquish the limelight on his big day, however, Le Roi became embroiled in a bitty spat with Ruddock after Liverpool’s fun-loving defender fiddled with the Frenchman’s famous collar once too often – but not before Cantona’s jibes about his opponent’s weight. The offer of a fight in the tunnel never materialised.

In the end, Cantona had the last laugh, salvaging a point from the spot in front of a delighted home crowd.

Another FA Cup final, this one infamous for Liverpool’s Spice Boys.

Jamie Redknapp, Steve McManaman & Co. arrived at Wembley in ludicrous matching white suits, and were duly sent packing after 90 less-than-memorable minutes in which Cantona drove the only goal of the game beyond the Reds’ scrambling masses with five minutes remaining.

Michael Owen nodded Liverpool in front early on, and with just two minutes left it looked like the Reds would have their first taste of victory over United in the FA Cup since 1922.

But Dwight Yorke and Ole Gunnar Solskjaer had other ideas in an uncanny rehearsal of what was to come in Barcelona, knocking in 88th- and 90th-minute goals to break hearts at Anfield once again.

Above everything else this was a significant victory for Liverpool simply because it ended their dreadful 10-game losing streak in north-west derbies.

Danny Murphy’s curled free-kick did the damage, giving the Reds belief to kick-start their own five-match winning streak over their great rivals.

This was surely Liverpool’s finest performance at Old Trafford in recent history.

Having slipped up in the race for the title, Rafa Benitez’s side needed a win to boost hopes of a first league title in the Premier League era.

Cristiano Ronaldo put United in front from the spot early in the game, but Fernando Torres capitalised on an uncharacteristic mistake from Nemanja Vidic – who was later sent off – before Steven Gerrard’s penalty, an audacious Fabio Aurelio free-kick and Andrea Dossena’s lob over Edwin van der Sar completed the rout.

Guess who won the title that year? We’ll give you a clue: it wasn’t Liverpool.

United fans may argue Dimitar Berbatov was worth his £30m price tag for this performance alone at Old Trafford.

The Bulgarian notched an incredible hat-trick, including an unbelievable overhead kick from the edge of the area that crashed off Pepe Renia’s crossbar and in.

Skipper Gerrard had hauled the Reds back into the match with a brace, but that man Berba capped his virtuoso display with six minutes remaining, heading home John O’Shea’s floated cross to send Old Trafford into raptures once more.

Subscribe to FourFourTwo today and get three issues delivered for just £3.

SUPER SUNDAY Which European derbies are on this weekend and where can I watch them?

15 Bizarre Royal Family Holiday Rules They're Not Allowed to Break

The Guardian: Trump tested positive for Covid-19 ahead of 2020 debate with Biden

All You Want for Christmas: Mariah Carey's Style Evolution

The gaffer picks the team, says Lisa Nandy in swipe at Angela Rayner over Labour reshuffle

© Provided by Daily Mail MailOnline logo She’s never shied away from showing off her lavish festive decor. And Victoria Beckham offered a glimpse of her latest Christmas decorations as ... Read more »

Brett Favre is sold on the Mac Jones era in New England. Earlier this week, the Packers legend drew comparisons between Tom Brady and the rookie quarterback, who has led ... Read more »

Accuser Describes Maxwell and Epstein Ensnaring and Abusing Her at 14

SHE may try to eat vegan during the week, but Meghan Markle is seen scoffing chicken in a newly-unearthed TV film released just months before she met Prince Harry. In ... Read more »

Scarlett Johansson Finally Speaks Out About Her Lawsuit With Disney+

Craig Revel Horwood is keen for next year’s series of Strictly Come Dancing to boast five judges. The talent show star – who has handed out scores on the hit ... Read more »

Debt collectors are allowed to DM you on social media now

MUMBAI – Smallcap World Fund on Wednesday bought 10 million shares of IIFL Finance at Rs 300 apiece through a bulk deal on the BSE. In another transaction, Hamblin Watsa ... Read more »

Big tech's first generation of founders are starting to step aside

Massive tech companies like Google, Amazon, Netflix, and more have had a huge impact on the way we live our lives, and have had incredible levels of financial success. Another ... Read more »

Former wonderkid Freddy Adu has opened up on his trial at Manchester United – revealing his adulation for Sir Alex Ferguson and the advice given to him by Cristiano Ronaldo. ... Read more »

© PIUS UTOMI EKPEI Nigeria and Ghana have both reported cases of Omicron variant, while they both roll out mass Covid vaccine campaigns Nigeria, Africa’s most populous country, on Wednesday ... Read more »

© Provided by Times Live December may signal the start of the “silly season”, but the National Debt Counsellors’ Association (NDCA) on Wednesday warned this does not mean consumers should ... Read more »

© Provided by GamePur Holiday Hoarders is a Christmas-themed mission set in a revamped version of the Paris location. In it, you are tasked with killing Harry and Marv, two ... Read more »

© insideEvs.com Copyright Tailpipe pollution Get a load of these doomsday scenarios, conspiracy theories, and lies people are spreading to try to stop EV adoption. This article comes to us ... Read more »

Voices: If Boris Johnson wants to fix the further education system, he should watch MasterChef: The Professionals

Voices: If Boris Johnson wants to fix the further education system, he should watch MasterChef: The Professionals You know the drill. Monica and Marcus – the terrifying, but cool as ... Read more »

Travelling to India? Leave airport early if you can pay more for an RTPCR test

Travelling to India? Leave airport early if you can pay more for an RTPCR test If you are an international traveller arriving from at risk countries or otherwise and are ... Read more »

With Omicron Becoming 'Variant of Concern', Indian Railways on its Toes, Tightens Guidelines

© Provided by News18 With Omicron Becoming ‘Variant of Concern’, Indian Railways on its Toes, Tightens Guidelines The Indian Railways has issued a notification regarding the Omicron variant of the ... Read more »

Face mask exemptions: 5 'reasonable excuses' for not wearing one and how effective masks are

‘Wear your facemask unless you are exempt’ – words we are all now familiar with. Prime Minister Boris Johnson announced over the weekend that it was now compulsory in England ... Read more »

Three's SIM-only deals have been EXTENDED beyond Cyber Monday

© Expert Reviews three mobile sim only black friday deal lead image Mobile networks Three has a reputation for delivering delicious data deals and this SIM-only offer is a doozie: if you ... Read more »

© Ted Aljibe/AFP Philippine share prices continued to bleed on Wednesday, by over three percent, fueled by investors’ flight from the local bourse in light of concerns over the Omicron ... Read more »

3 Things to discuss with your partner before you get married

From choosing the best place for a honeymoon to figuring out the wedding and post-wedding outfits, we all discuss every minor thing with our to-be-husbands or wives. While it is ... Read more »

© Provided by Interaksyon MANILA — New coronavirus variants highlight the need for countries to do their own research and development on COVID-19 vaccines, said a senior Philippines trade official, ... Read more »

KPMG threatened with ban on bids for government contracts

KPMG could be barred from bidding for government contracts if it is found to repeat recent scandals, the Cabinet Office has warned.  © Provided by The Telegraph KPMG cabinet office ... Read more »

I'm a wedding planner. Here are all of the trends that are going in and out of style.

© Provided by INSIDER Some old wedding traditions are falling out of favor. Bogdan Sonjachnyj/Shutterstock; AS project/Shutterstock I’m a wedding planner, and I see ceremony and reception trends go in ... Read more »

Northern Ireland ‘out on its own' in not tackling period poverty

© PA Archive MLAs were told that NI is the only part of the UK without a permanent scheme to tackle period poverty (Gareth Fuller/PA) – PA Archive Northern Ireland ... Read more »

A group of Republicans are plotting a government shutdown to derail Biden's vaccine mandate, report says

There isn’t anything that Janhvi Kapoor can’t pull off with ease and her latest pictures from a photoshoot are proof of that. For the shoot, the diva opted for a ... Read more »

This is how you actually pronounce omicron, the name of the new coronavirus variant

© Getty Images Girl in mask A BBC News presenter has been put on blast by the pronunciation police for ‘mispronouncing’ the new coronavirus strain “omicron” – and it turns ... Read more »

Negative RT-PCR Test Must for All Domestic Passengers Landing in Mumbai, Mandates Maharashtra Amid Omicron Scare

© Provided by News18 Negative RT-PCR Test Must for All Domestic Passengers Landing in Mumbai, Mandates Maharashtra Amid Omicron Scare As states around India rush to impose travel curbs to ... Read more »

Michael Carrick is glad to be welcoming Harry Maguire back to the squad for Thursday’s fixture against Arsenal, but it seems unlikely that any more of Manchester United’s injured stars ... Read more »

Voices: We now have a chance to guarantee paid leave for parents who experience a miscarriage

Sunny Deol, Ameesha Patel transform into Tara and Sakeena as they begin shooting shooting for Gadar 2

'Virat had a huge say in this': Daniel Vettori identifies the 'heir to Kohli', names his replacement as captain of RCB

Anthony Smith, president of Magdalen College, Oxford, who was a wise pastor to students and is also remembered for the founding of Channel 4 – obituary