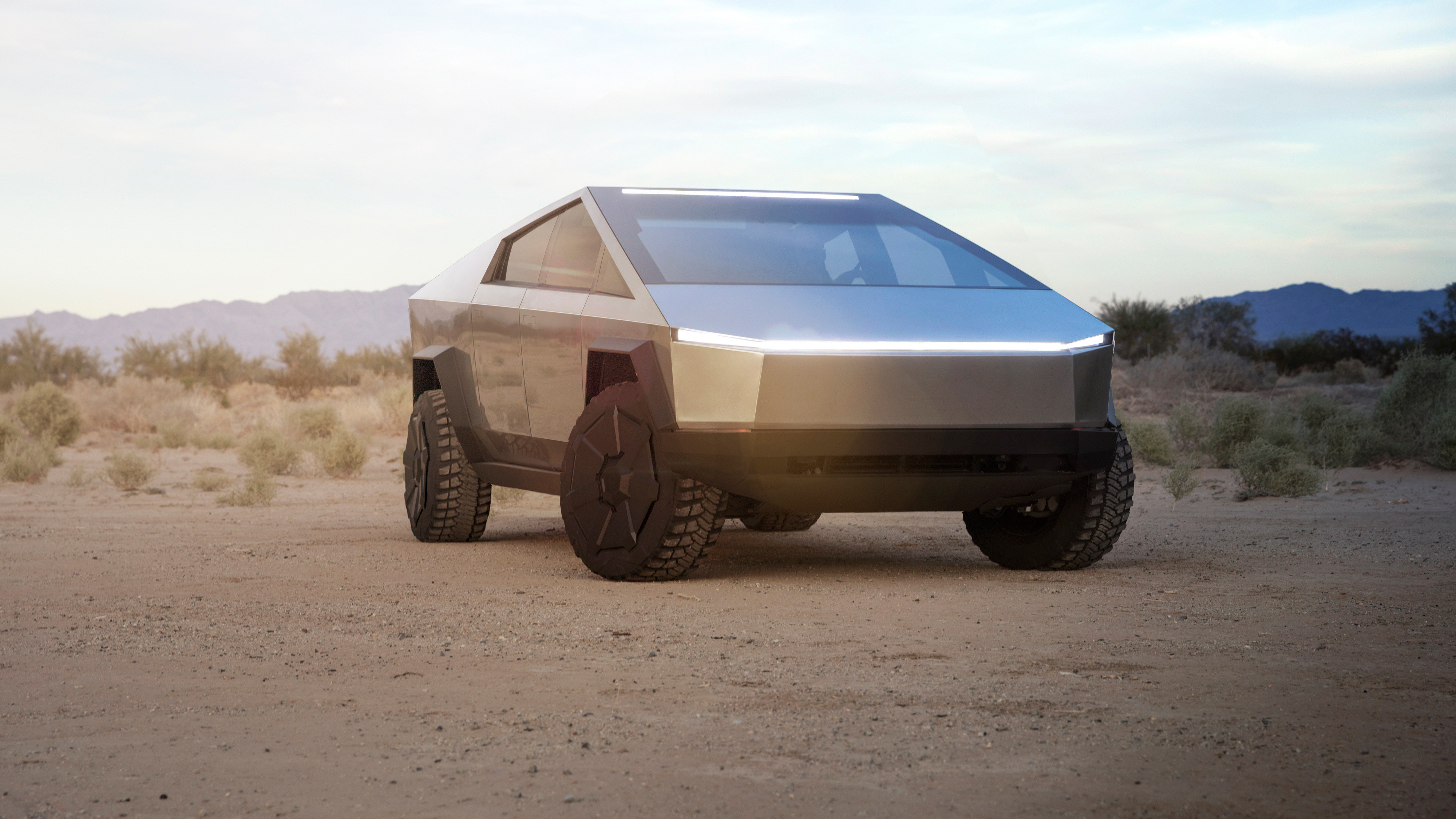 Earlier this year, Tesla CEO Elon Musk described his company’s in-development Cybertruck as a “special project” near and dear to his heart – and thanks to some brand new footage of the all-electric vehicle in action, we can see why.

In a minute-long teaser video (which you’ll find below) filmed by Twitter user Harsimran Bansa, the Tesla Cybertruck is seen driving on urban roads, drifting through a field and slaloming across the grounds of Tesla’s unfinished Texas Gigafactory in theatrical style.

Interestingly, Bansa caught a glimpse of the footage in a Tesla showroom, suggesting the video isn’t a leak, per se, but an official Cybertruck teaser the company hasn’t yet shared through its own social channels.

Either way, it shows off the upcoming vehicle in an awesome new light – check it out below.

The new footage is so cool, in fact, that it looks like Tesla has taken inspiration from the cornfield chase in Christopher Nolan’s Interstellar, with the Cybertruck kicking up plumes of dirt as it speeds through grassland in pursuit of… something – perhaps a release date?

On that front, the news is less exciting. We recently learned that the Cybertruck may not hit the road until 2023, as Tesla continues to weather a supply chain storm whipped up by both the global pandemic and global microchip shortage.

What is the Tesla Cybertruck?

To those unfamiliar with Elon Musk’s much-anticipated vehicular project, the Tesla Cybertruck is unlike any road vehicle we’ve seen before.

For starters, it will supposedly offer “better utility than a truck with more performance than a sports car,” according to Tesla’s official product page for the vehicle.

The Cybertruck has been designed with a “nearly impenetrable” exterior shell made from “Ultra-Hard 30X Cold-Rolled stainless-steel structural skin” and “Tesla armor glass” – which should keep passengers and the vehicle itself protected from all types of damage. 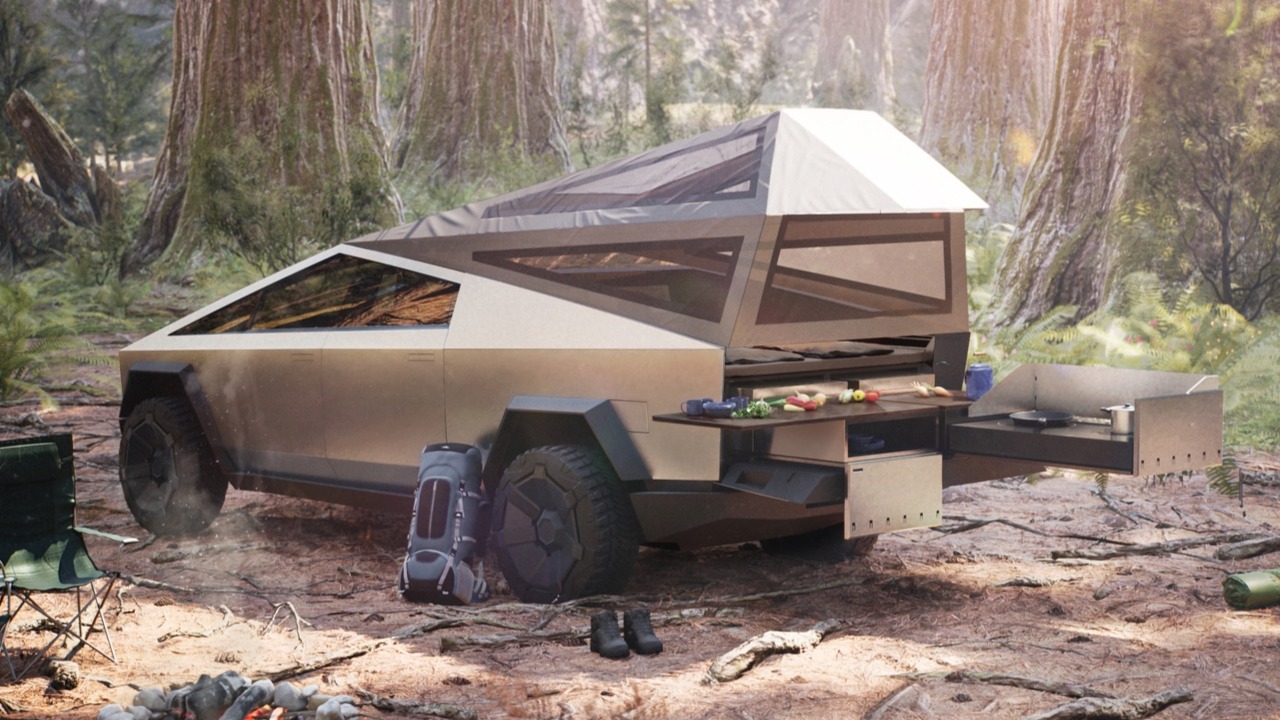 As for that impressive utility, the truck has been engineered with 100 cubic feet of exterior, lockable storage – found in places such as the under-bed, trunk and sail pillars – and will come prepared with on-board power and compressed air.

It’s heavy, sure, but the Cybertruck will also be mighty quick. Tesla is claiming it can sprint from 0-60mph in as little as 2.9 seconds, thanks to a powerful drivetrain and low center of gravity providing “extraordinary traction control and torque.”

As for range, the Cybertruck is set to offer up to 500 miles – which is an equally mind-blowing figure given the state of the competition right now.

If these credentials prove accurate when it finally hits the road, the Cybertruck will rival ultra-premium EVs like the Mercedes EQS for performance while offering the practical versatility of utility vehicles like electric Hummer.

Musk himself has already described his latest four-wheeled project as “a glitch in the Matrix” – but judging by this latest footage, the Cybertruck is looking more and more like an extremely exciting reality.

Billionaire Mukesh Ambani on Friday backed the proposed data privacy and cryptocurrency bills, saying India is putting in place the most forward-looking policies and regulations.Ambani, who has been a votary ... Read more »

For the past few decades, it was assumed that rising startups would opt for exact brand match domain names ending in the legacy top-level domain (TLD) .com as soon as ... Read more »

Indian doctor with no travel history tests positive for omicron: ‘This may be everywhere already'

Samsung Galaxy S20 | Photo credit: Daniel Romero on Unsplash With the possibility of the Samsung Galaxy S21 FE launching in a month, more details about the anticipated mid-range phone have leaked once ... Read more »

The manoeuvre is the latest in a series of incidents in which debris has forced astronauts to respond and comes amid calls for space junk to be regulated. Read more »

Samsung Galaxy A72 | Photo credit: Đức Trịnh on Unsplash Renders allegedly showing the design of the upcoming Galaxy A73 surfaced recently, and it appears that Samsung is not planning a significant redesign. ... Read more »

The AI software allows an augmented reality headset to detect a patient’s veins and superimpose digital images of the blood vessels over his arm in real time. SINGAPORE – The ... Read more »

The best photo gifts for Christmas 2021

Photo gifts come in all different shapes and sizes, from personalized t-shirts, mugs and mouse mats, to more traditional photo books. Essentially you can take any photo on your camera, ... Read more »

Zoom has settled a class-action lawsuit that alleged the company was in breach of privacy laws and put its users’ data at risk. As a result, it now needs to ... Read more »

30-second review It’s a confident or foolish company that enters the mid-range true wireless fray. Happily, Technics is the former, and where the EAH-AZ60 are concerned, it has every right ... Read more »

Omicron: better to be safe (and quick) than sorry

People Image Studio/Shutterstock On discovering the omicron variant, many countries moved quickly to impose travel restrictions and other public health measures, such as compulsory mask wearing. But, given the lack ... Read more »

Rumor: A new Matrix game may come to the PS5

Alongside the new The Matrix Resurrections movie, there’ll be a tie-in game called Matrix Awakens that’ll be developed using Unreal Engine 5 and will release on the PS5, according to ... Read more »

The best open source software makes it simple and easy to do common computing tasks without having to pay for a subscription or license fee, for everyone from home to ... Read more »

AnTuTu recently shared its list of best-performing smartphones in the month of November along with that of best mid-range phones. In the flagship segment, the list was dominated by the ... Read more »

There's an MCU of Battlefield games coming, but can Respawn's boss save it?

EA DICE’s recently-released Battlefield 2042 hasn’t gotten off to the best of starts, with bugs and issues plaguing the game even after a few patches. But that hasn’t stopped EA ... Read more »

Yahoo Life has received compensation to create this article, and receives commission from purchases made via links on this page. Pricing and availability are subject to change. Take your pick ... Read more »

What is Salesforce Service Cloud

Google is planning to release its first branded smartwatch next year, according to inside sources – and it might actually be a Fitbit. Business Insider, which first broke the story, ... Read more »

Employees say passwords are preventing them from doing their jobs

Passwords are a major hindrance to productivity, as people regularly forget their credentials and get locked out of their computers and apps. Often, it takes employees hours to get back ... Read more »

Niantic has updated the iOS app of Pokémon Go to make better use of native frame rates on iPhone – and the results are gorgeous. The latest update (version 1.191.0) ... Read more »

Motorola announced five smartphones for international markets last month. Out of those smartphones, the company launched the Moto G31 earlier this week and now the company is gearing up to ... Read more »

Real Musk fanboys travel to their funeral in a Tesla hearse

At SHIFT, we get up close and personal with many Tesla fans. For most, it’s an all-encompassing passion where their car and “The Cult of Tesla” play a big part ... Read more »

Video: Does Spotify have a problem with hate speech?

Spotify's podcast library is filled with all kinds of shows, from true crime to comedy. But the company has removed nearly 150 hours of content after a Sky News investigation uncovered antisemitic, racist and white supremacist material among them. Read more »

SEOUL, Dec. 3 (Yonhap) — South Korea on Friday expressed concerns over Japan’s assessment report about its planned release of radioactive water into the sea from its crippled Fukushima nuclear ... Read more »

Sky Glass review: does the broadband provider's new TV launch live up to the hype?

(Sky) Not content with being just an internet or TV provider, Sky has ventured into devices with its latest launch. Europe’s leading media and entertainment company has unveiled the Sky ... Read more »

Vivaldi is trying to lure in as many Android users as it can with its most recent mobile browser update. Vivaldi 5.0 is the first mobile browser in the world ... Read more »

Cybersecurity researchers have helped fix an issue with Box that could have been exploited to bypass multi-factor authentication (MFA) for accounts that relied on authenticator apps such as Google Authenticator. ... Read more »

Crime prediction software promised to be free of biases. New data shows it perpetuates them

This article was by Aaron Sankin, Dhruv Mehrotra for Gizmodo, Surya Mattu, and Annie Gilbertson and was republished under the license.  Between 2018 and 2021, more than one in 33 ... Read more »

Black Friday may be over, but these Apple AirPod deals are still running

Apple AirPods are still the must-have headphones (Getty) Yahoo Entertainment's editors are committed to independently selecting wonderful products at great prices for you. We may receive a share from purchases ... Read more »

Xiaomi 11T Pro was launched in Europe earlier this year along with Xiaomi 11T. The smartphone is now tipped to launch in India soon as it has been spotted on ... Read more »

SINGAPORE – The Republic is building its third national supercomputer to advance research in Covid-19 and other areas in healthcare. The new supercomputer is so fast it is expected to ... Read more »

You may not think of the humble Chromebook as a gaming device, but that could change, as it looks like official support for Steam in Chrome OS is coming soon. ... Read more »

Pigs beaten and cut without pain relief on farm linked to Tesco, Sainsbury, Morrisons and Asda

Why Nvidia's $80B deal to buy ARM is in jeopardy

The US Federal Trade Commission (FTC) has filed a lawsuit against graphics card giant Nvidia to block its deal to purchase ARM. Before we take a look at why FTC‘s ... Read more »

Moto G51 likely to be launched in India on December 10: All you need to know

Earlier this week, Motorola launched the Moto G31 in India. Now, the Moto G51 might be on its way. The Moto G51 could be unveiled in India as early as ... Read more »

Nintendo has revealed that Paper Mario will be the next N64 game to come to its Switch Online Expansion Pack service on December 10. The classic RPG was extremely well ... Read more »

Look upon the Steam Deck packaging and despair

Valve’s Steam Deck may have been delayed until February 2022, but you can start taking in the sight of its packaging right now. The handful of teaser images shows the ... Read more »

Hey Google, here's a blueprint for a Pixel smartwatch to rival the Apple Watch