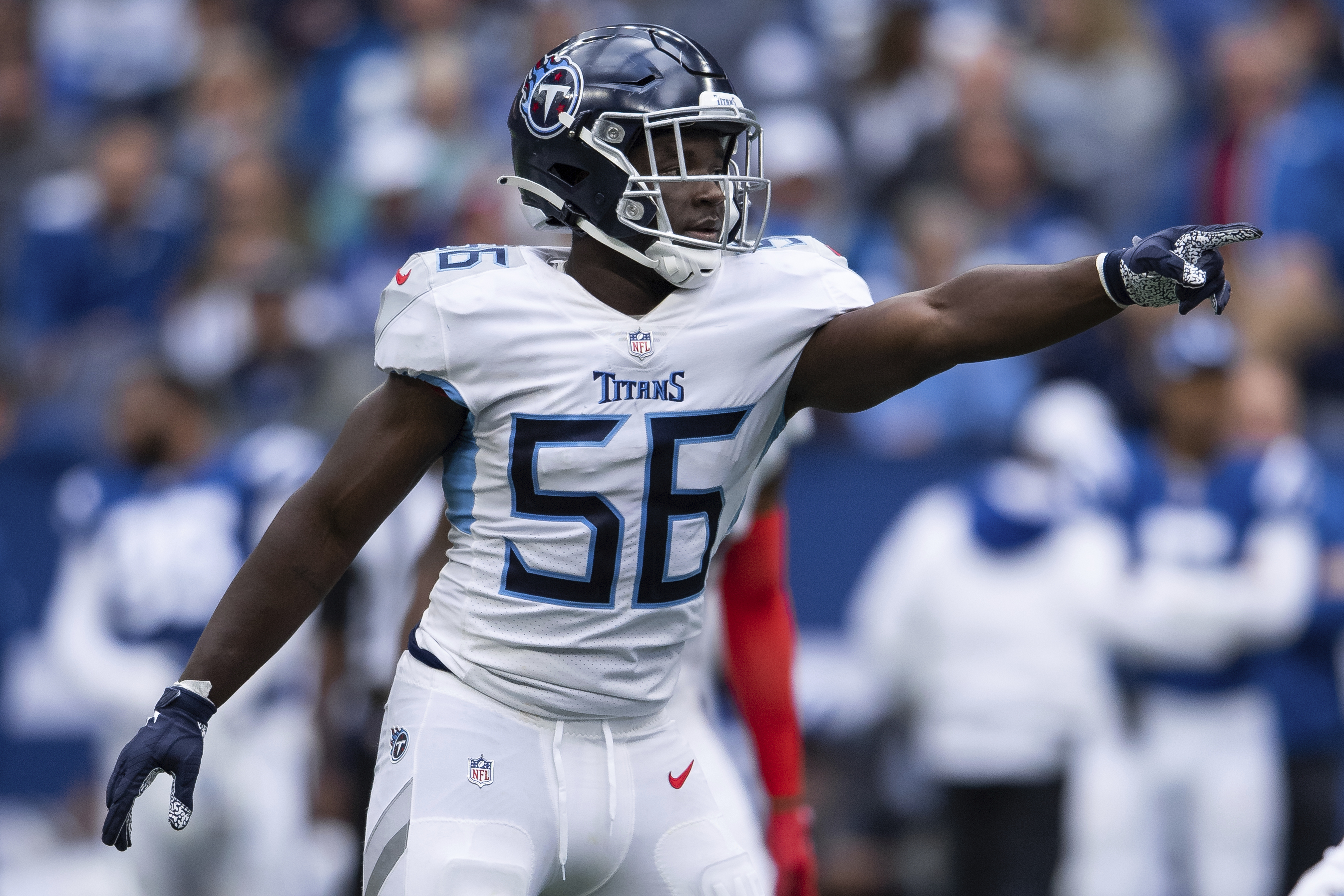 The already short-handed Tennessee Titans have lost yet another player due to injury, as the team announced it has placed 2021 third-round pick and linebacker, Monty Rice, on Injured Reserve.

Rice, who suffered an ankle injury during the Week 12 loss to the New England Patriots, will miss at least the next three games, which means he won’t return until at least Week 17 against the Miami Dolphins.

As is the case with most positions on the team, the Titans were already dealing with injuries at the linebacker, with starters Rashaan Evans and David Long both having missed multiple games in a row.

The hope is that either or both will be healthy enough to return after the bye in Week 14. Tennessee also has Jayon Brown, Dylan Cole, Joe Jones and Nick Dzubnar on the roster.

In addition to placing Rice on IR, the Titans also waived wide receiver Austin Mack from the practice squad.

Titans hoping Golden Tate can help them after the bye

What your team is thankful for: Winnipeg Jets

Dan Evans given ree passage through to the third round

'He has no one to blame but himself': NFL moves to dismiss Jon Gruden's lawsuit

Deiveson Figueiredo on reclaiming title from Brandon Moreno at UFC 270: 'I'm sure of that'

Randall Cobb is set to make a timely return for the Packers‘ divisional round game against the 49ers on Saturday. The veteran receiver hasn’t played since having surgery to repair ... Read more »

After a five game road trip that saw the Rangers hold serve with a record of 3-2-0, the team is back home for an Original Six matchup with the Toronto ... Read more »

An unexpected opportunity has opened up for Rafael Nadal at the Australian Open — and he is trying to look upon it all as a bonus. Nadal is the only ... Read more »

Andy Murray showed there is plenty of life in him yet as he returned to the court where he was virtually retired three years ago and defeated Nikoloz Basilashvili in ... Read more »

Novak Djokovic set for locker room ban...if he's allowed in at all...

Novak Djokovic could face a ban from locker rooms and other on-site facilities while unvaccinated, even if he manages to continue entering certain tournaments. Instructions sent to players participating at ... Read more »

Australia’s great entertainer Nick Kyrgios might not have played a competitive match since August, but he has clearly been spending time in his tennis laboratory, dreaming up new shots. © ... Read more »

Novak Djokovic and his wife own an 80 per cent share in a Danish biotech firm dedicated to finding a cure for Covid-19, it has been revealed.  The Serbian tennis ... Read more »

The UFC will hold an event April 30 – and it already has its first fight on the books. © Provided by MMAJunkie A women’s flyweight matchup between Gina Mazany ... Read more »

Four months after Baker Mayfield’s left shoulder popped out when he attempted a tackle on an interception return in Week 2, the Browns quarterback had surgery on the completely torn ... Read more »

MILAN (AP) — Inter Milan survived a scare as it beat Empoli 3-2 after extra time on Wednesday to reach the Italian Cup quarterfinals. It appeared as if Empoli was ... Read more »

Pepijn Lijnders, Liverpool’s assistant manager, has said Jürgen Klopp’s side have the “weapons” to hurt Arsenal and added incentive to reach the Carabao Cup final having felt written off after ... Read more »

CALGARY — Sean McEwen is staying put. The Calgary Stampeders signed the veteran centre to a two-year contract extension Wednesday. The 2021 CFL all-star was scheduled to become a free ... Read more »

Video: Ciryl Gane: ‘I want to fight against Jon Jones' after beating Francis Ngannou at UFC 270

© Photo by Cooper Neill/Zuffa LLC Ciryl Gane is laser focused on beating former teammate Francis Ngannou in the UFC 270 main event, but he can’t ignore the possibilities of ... Read more »

A nearly perfect storm of a strong enough economy, thirsty advertisers getting back in the game and the USA’s bottomless appetite for football is resulting in a record boom for ... Read more »

Mekies: Teams will have ‘even less reference' in 2022

Formula 1 teams will have less of a reference point to each other in 2022, according to Ferrari race director Laurent Mekies. © PA Images Ferrari drivers Carlos Sainz and ... Read more »

© Provided by The Gazette Kent Hughes speaks at news conference introducing him as the new general manager of the Montreal Canadiens, at the Bell Centre in Montreal on Wednesday, ... Read more »

NEW YORK — The NHL has fined Montreal Canadiens forward Jonathan Drouin US$5,000 for cross-checking Stars forward Tyler Seguin during a game Tuesday night in Dallas. © Provided by The ... Read more »

The War for the NHL's Metro Division is Here

At the beginning of the NHL’s current regular season, there was a good case to be made that the Metropolitan Division was going to be the most difficult of the ... Read more »

Pete DuPre, a World War II veteran affectionally known as “Harmonica Pete” for playing the national anthem on his harmonica at many sporting events, has died. He was 98. DuPre’s ... Read more »

YAOUNDE, Cameroon (AP) — Egypt qualified for the knockout stage at the African Cup of Nations on Wednesday and put a stop for now to the run of surprise results ... Read more »

Tottenham staged the latest-ever comeback to win a Premier League game on Wednesday. Manchester United’s second-half turnaround was quite the surprise, too. On a dramatic night in England’s top flight, ... Read more »

'Happy to be back playing football': Titans RB Derrick Henry expected to play Saturday vs. Bengals

Derrick Henry was asked if he expects to play Saturday versus the Cincinnati Bengals. The Tennessee Titans running back’s response was ambiguous, but his grin said it all. “We’ll see ... Read more »

Stephanie Labbe, the goalkeeper for the Canadian women’s national team that won the gold medal at the Tokyo Olympics, has announced her retirement. Labbe released an emotional video on Wednesday ... Read more »

CHICAGO (AP) — The United States will play its final home World Cup qualifier at Orlando, Florida, on March 27 against Panama. The U.S. Soccer Federation announced Wednesday that the ... Read more »

It was learned Tuesday that the NHL and NHL Players’ Association had agreed to stop testing asymptomatic players and staff members in an attempt to limit or avoid future game ... Read more »

BERLIN (AP) — Union Berlin delivered another demoralizing blow to city rival Hertha Berlin by dumping its neighbor out of the German Cup with a 3-2 away win in the ... Read more »

TORONTO – Toward the end of her days as a student-athlete at the University of Guelph-Humber, Jaime Vieira began considering possibilities for the future. © Provided by Sportsnet Jamie-Viera-BlueJays Coaching ... Read more »

Willie O’Ree broke the NHL’s colour barrier on Jan. 18, 1958, but that was far from the beginning of his story. A few seasons prior, he lost sight in his ... Read more »

The NHL’s plan to shoehorn nearly 100 pandemic postponements into its jam-packed schedule window came into focus Wednesday. The league unveiled new dates for 98 games scrubbed during a two-month ... Read more »

The NHL has found new dates for the 98 games that were previously postponed from the past two months due to COVID-19. © Provided by Hockey News on Sports Illustrated ... Read more »

'Oh that was you? My bad': Jacksonville Jaguars LB Lerentee McCray charged with fleeing police

The Latest: Evans moves on in Australia; opponent withdraws

'Jonathan India is now and will forever be my favorite player': Reds' ROY makes fan's day

Check out this week's featured deals from The Source

Francis Ngannou reveals he accidentally KO'd Ciryl Gane in training, denies they were ever friends or teammates

Atlético out of Copa, Sevilla held in Spanish league race