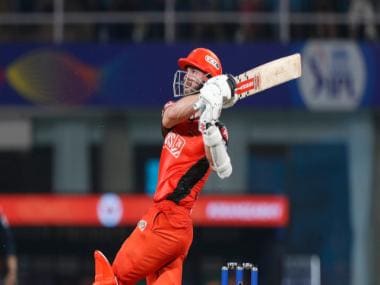 We have the two Iyers batting in tandem. Skipper Shreyas drives through the extra cover region, pushing for a third run. Venkatesh gets a thick outside edge that flies past the slip region and runs all the way to the third man fence for the first four of the innings. Bhuvi keeps it tidy in the remaining deliveries. Seven from the over.

Excellent start by Jansen as he gives away just three runs, including a wide in the first ball, while accounting for debutant Aaron Finch’s wicket by getting the Aussie caught-behind for 7 in the second delivery.

OUT! Marco Jansen strikes early, as Finch departs for 7 after getting an under edge! The Australia white-ball skipper was looking for an uppish drive over the cover region, but the ball didn’t rise as expected. KKR 11/1

Both Venkatesh and Finch get off the mark with a single in each of the first two balls. Finch later collects the first six of the innings with a confident hoick over long on. Nine from the over, including a bye, not the best of starts for Bhuvneshwar.

Bhuvneshwar Kumar to bowl the first over of the match, with Aaron Finch and Venkatesh Iyer opening the innings for KKR, the former making his first appearance for Shreyas Iyer’s side today.

Shreyas Iyer: Can’t really say much about this wicket. There’s so much grass on it. I’m happy batting first. There are a considerable amount of changes due to illnesses and injuries. Finch, Khan, Jackson are in for Sam, Ajinkya and Rasikh. (Venkatesh’s knee) He’s alright. There wasn’t any problem when we practiced.

Kane Williamson: It’s been a pretty good wicket throughout, dew factor’s perhaps the reason. Team’s improving and growing as a unit. Each game we play is a tough challenge. (Sundar) Obviously not playing today, Suchith comes in.

Some lovely grass coverage here. Good pace and bounce. Batters have made the most in the early stages here. Only 68 metres to clear the fence at point, not a big hit at all. I say bat first and put runs on the board. It’s a really good surface.

Finch to make his debut for KKR!

Australia white-ball captain Aaron Finch is set to make his appearance for a ninth different franchise in the Indian Premier League. Finch has been handed his maiden cap by team mentor David Hussey minutes before toss. He’s not the only debutant though, with Aman Khan also making his debut for the two-time champions today.

In cricket, there is a saying that a leadership role makes a player more ‘mature’, both on and off the field. The added responsibility urges an individual to set an example for his/her teammates with his/her own performance to earn the respect from them. And in this process the player ends up adding more skills to his/her own craft.

This is exactly what is happening with Hardik Pandya in this season of IPL.

Click here to read the full piece by Sandipan Banerjee

The Shreyas Iyer-led Kolkata Knight Riders are off to a positive start in IPL 2022, finding themselves at the second spot in the points table. Sunrisers Hyderabad, led by New Zealand skipper Kane Williamson are back in business after losing their first two games by beating Chennai Super Kings and Gujarat Titans — both by eight wickets — in their last two outings.

In a major blow to CSK’s hopes of successfully defending their title and lift the trophy for a record-equalling fifth time, bowling all-rounder Deepak Chahar was ruled out for the entire season. Chahar had suffered a hamstring injury in February during the home series against the West Indies, and has been out of action since.

As for the development that could potentially affect the entire tournament, DC physio Patrick Farhart has tested positive for COVID and is being closely monitored by the Delhi medical team at the moment.

Resurgent and rejigged SRH gear up for KKR challenge

After a subdued start to the tournament, SRH turned things around with back-to-back wins over Chennai Super Kings and Gujarat Titans, and Kane Williamson’s team is now eying a hat-trick of victories.

KKR, on the other hand, are heading into the match after a loss against Delhi Capitals but it remains a formidable side and would look to bounce back from the reversal.

Click here to read the SRH vs KKR preview

Hello and welcome to our live coverage of the 25th match of the 2022 Indian Premier League, with Sunrisers Hyderabad taking on Kolkata Knight Riders at the Brabourne Stadium in Mumbai.

Sunrisers Hyderabad vs Kolkata Knight Riders Live update – Tata IPL 2022 SRH vs KKR Live cricket score, 25th IPL Match Live Coverage: We have the two Iyers batting in tandem. Skipper Shreyas drives through the extra cover region, pushing for a third run. Venkatesh gets a thick outside edge that flies past the slip region and runs all the way to the third man fence for the first four of the innings. Bhuvi keeps it tidy in the remaining deliveries. Seven from the over.

This match will take place at the Brabourne Stadium in Mumbai and if the form of both the sides is anything to go by, we can hope for an exciting clash. After suffering two defeats on the trot, Sunrisers Hyderabad bounced back and notched up two successive wins. KKR, on the other hand, have been fairly consistent, and have won three out of their five games so far. However, they lost their last game against the Delhi Capitals and need to bounce back to their winning ways.

Here’s all you need to know regarding when and where to watch SRH vs KKR match:

When will the SunRisers Hyderabad and Kolkata Knight Riders match be played?

Where will the SunRisers Hyderabad and Kolkata Knight Riders match be held?

The SRH vs KKR IPL 2022 match will be held at Brabourne Stadium, Mumbai.

What time will the SunRisers Hyderabad and Kolkata Knight Riders match start?

Where can you watch SRH vs KKR IPL 2022 match on TV and online?

You can also follow firstpost.com to check out the live scores and commentary of the SRH vs KKR IPL 2022 match.