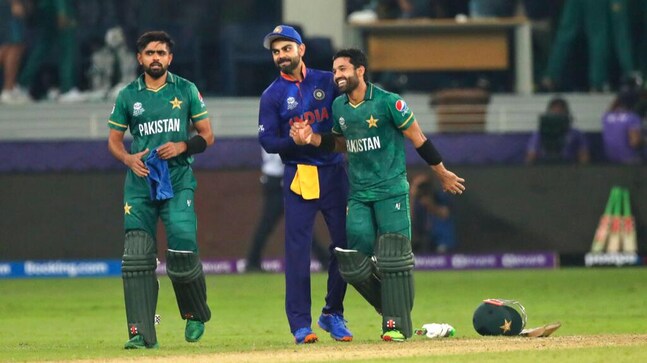 Pakistan head coach Saqlain Mushtaq wants to see his team play the ICC T20 World Cup 2021 final against India as he thinks that it will be good for the game of cricket if the two teams lock horns again in the summit clash on November 15.

Pakistan crushed India by 10 wickets in their opening game in the Super 12 to register their maiden World Cup win over their neighbours in white-ball cricket. The two arch rivals had contested in the inaugural T20 World Cup final in Durban in 2007 in which India beat Pakistan.

“If India and Pakistan qualify for the final together then the ICC, and the entire world cricket will have some fun. It will be good for cricket because they are our neighbouring country. If we both play then it will be good for our relationship as well,” Saqlain, who was appointed Pakistan’s interim coach for this tournament, said on Friday.

Saqlain Mushtaq also said that the October 24 game between Pakistan and India “was a win for insaniyat and mohabbat”.

“Whatever happened in the last match, be it Virat Kohli, Dhoni hugging our players, it was great for world cricket. Keeping aside the India versus Pakistan clash, the best thing, for me, from the match was that it was a win for insaniyat and mohabbat.

“It’s a game and winning and losing is part of it. Hats off to Babar, Rizwan, Dani, Virat, Dhoni because they have sent a strong message for the entire world and for both the countries. I always say, ‘mohabbat ki jeet ho, aur nafrat ki haar ho (love should trump hate),” Saqlain said.

Group 2 toppers Pakistan will take on Afghanistan in their third Super 12 clash in Dubai on Friday. A win for the Men in Green will most certainly guarantee them a place in the semifinals.

Is memory loss due to aging or dementia? This important test could help

U.S. and other countries condemn Taliban over ‘summary killings' of former security forces

IT would be wrong to blame lockdown for the heart-rending fate of six-year-old Arthur Labinjo-Hughes. But there is something in it. The closure of schools at the height of the ... Read more »

Political parties in Tshwane could find themselves in the same situation as before — when the metro was put under administration in March 2020. © Copyright (c) Daily Maverick , ... Read more »

© Provided by The Guardian Photograph: Ian Forsyth/Getty Images Children in some parts of England are three times more likely to be vaccinated than others, figures from the House of ... Read more »

© Provided by Extra.ie Country music legend Garth Brooks responded to a viewer asking if he’s going to be playing a Galway gig in 2022. Garth is scheduled to play ... Read more »

Ant and Dec had a bit of fun at Boris Johnson’s expense on tonight’s I’m A Celebrity…Get Me Out of Here! The Geordie duo were talking about who was up ... Read more »

Arlene Phillips first star voted off I'm A Celebrity... Get Me Out Of Here

© Provided by The Times of India Mumbai: A senior executive in a plum posting at a large organisation in Mumbai wanted to relocate to Bengaluru to be with her ... Read more »

© Provided by The Indian Express THE Pune chapter of Indian National Society for Aerospace and Related Mechanisms (INSARM) organised a three-day national conference in Pune between December 2 and ... Read more »

© Provided by The Times of India Mumbai: The Reserve Bank of India (RBI) is likely to hold its repo rate (currently 4%) in the forthcoming monetary policy on December ... Read more »

© Provided by The Indian Express Navy Day was marked at INS Shivaji on Saturday with a number of activities on the theme of Navy Week 2021: ‘Indian Navy: Combat ... Read more »

© Provided by The Indian Express The Crime Branch busted an online extortion gang and arrested the gang leader for allegedly blackmailing at least 12 people in the last year. ... Read more »

© Provided by The Financial Express The past few years have been challenging for Max Life, with the management’s focus on simplifying the organisation structure. We hosted an investor day ... Read more »

Pension bill of PSBs may be an impediment for sale

© Provided by The Times of India Mumbai: The discovery of the new Omicron variant of the coronavirus has delayed stability in the term insurance market. Insurers, who are raising ... Read more »

The Australian and international news stories you need to know today, Monday December 6.

Giants report card: This is getting ridiculous

Grading the Giants’ 20-9 loss to the Dolphins on at Hard Rock Stadium on Sunday. Offense This has gone from bad to worse to ridiculous. No touchdowns, 250 total yards. ... Read more »

soh-2 Prices of Christmas staples ham and lechon have shot up, due to high demand amid the holiday season and the impact of the African swine fever on the sector. ... Read more »

Former Yorkshire cricket captain Darren Gough looks set to enjoy a surprise return to the county as their new director of cricket, marking his first role at the club since ... Read more »

THE parents of alleged Oxford high school shooter Ethan Crumbley were helped by a Detroit artist who reportedly let them hide in his studio's basement after they were charged with ... Read more »

Omicron means it's time to switch to N95 masks

Omicron means it’s time to switch to N95 masks The omicron variant is spreading fast. According to the World Health Organization, at least 38 countries, on six continents, have confirmed ... Read more »

© Provided by Pinkvilla Finally, Vicky Kaushal and Katrina Kaif’s royal wedding is just upon us. The couple is also starting their legendary wedding shenanigans from tomorrow (7 December) at ... Read more »

© Provided by WION Bangladeshi all-rounder Shakib Al Hasan channelled his inner child as he was spotted enjoying skidding on wet covers during the second Test match between Bangladesh and ... Read more »

The costs of Biden's war on oil include higher gas prices

President Joe Biden speaks on the economy during an event at the South Court Auditorium at Eisenhower Executive Office Building on November 23, 2021 in Washington, DC. Alex Wong/Getty Images ... Read more »

© Provided by Cover Media Tom Holland Tom Holland and Zendaya have joked about how their height difference altered a stunt on Spider-Man: No Way Home. The real-life couple made ... Read more »

© Provided by This Is Money MailOnline logo Britain’s mutual building societies, insurance companies and co-operatives were once a potent force. A product of the Victorian era’s reforming zeal, they ... Read more »

Due to Brexit, workers who live in the EU, EEA, or Switzerland will have to recalculate the amount of “qualifying years” they have endured to see if they meet the ... Read more »

Liam Scales admitted his phone was red hot after opening his Celtic account – but he’s hoping to get the call from Ange Postecoglou for Thursday. The former Shamrock Rovers ... Read more »

Keir Starmer has urged anti-vaxxers and jab sceptics to “think again” as he prepares to get his booster vaccine. The Labour leader, who is due to have his third dose ... Read more »

© Provided by Dot Esports The final day of the first split’s regular season took place with concurrently running lobbies, so no teams would be handed an unfair advantage with ... Read more »

I’m A Celebrity… Get Me Out Of Here! has seen its first contestant, Arlene Phillips, eliminated from Gwrych Castle. The 78 year old, whose daughters recently said they weren’t “embarrassed” ... Read more »

Sunstone Eduversity to double its 2021 growth

JSW Energy Rating: Sell- RE biz may get re-rated on rise in auction rate

Bloomberg doubles down on his most important legacy: charter schools

Darren Gough set to be named as Yorkshire's director of cricket

Everton fans to walk out against Arsenal in the 27th minute

PM Modi to inaugurate Rs 9,802 crore Saryu Canal project in UP on Dec 11