The coronavirus pandemic has left GP offices and A&E wards on their knees since September, with several hundred Covid patients still admitted daily. The Government has tried to correct the issue by plumping healthcare offices with a cash boost, but doctors and other professionals have said it doesn’t go far enough. Data has revealed the breadth of the crisis the NHS currently faces as a potentially devastating winter Covid wave looms.

Lengthening A&E wait times have left people stuck in the emergency room for more than four hours, exceeding the target introduced in 2004. 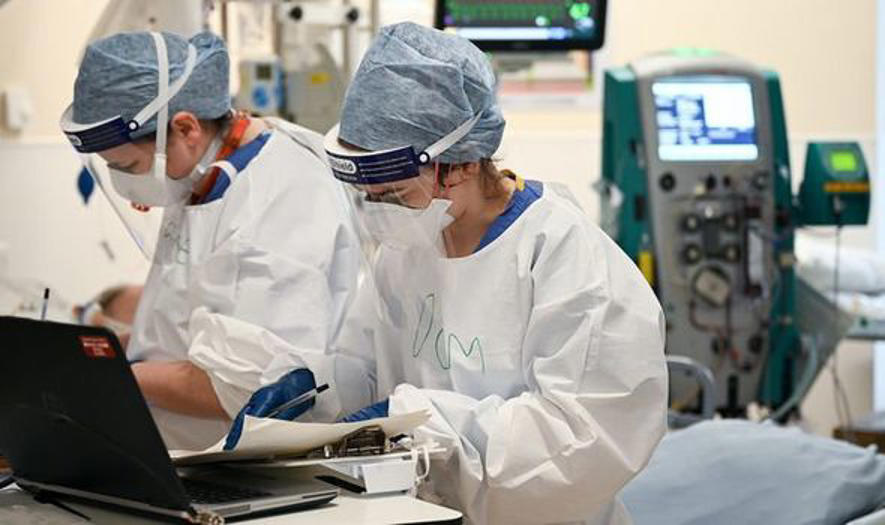 The situation doesn’t improve across the UK’s home nations, with nearly half waiting more than the target time. 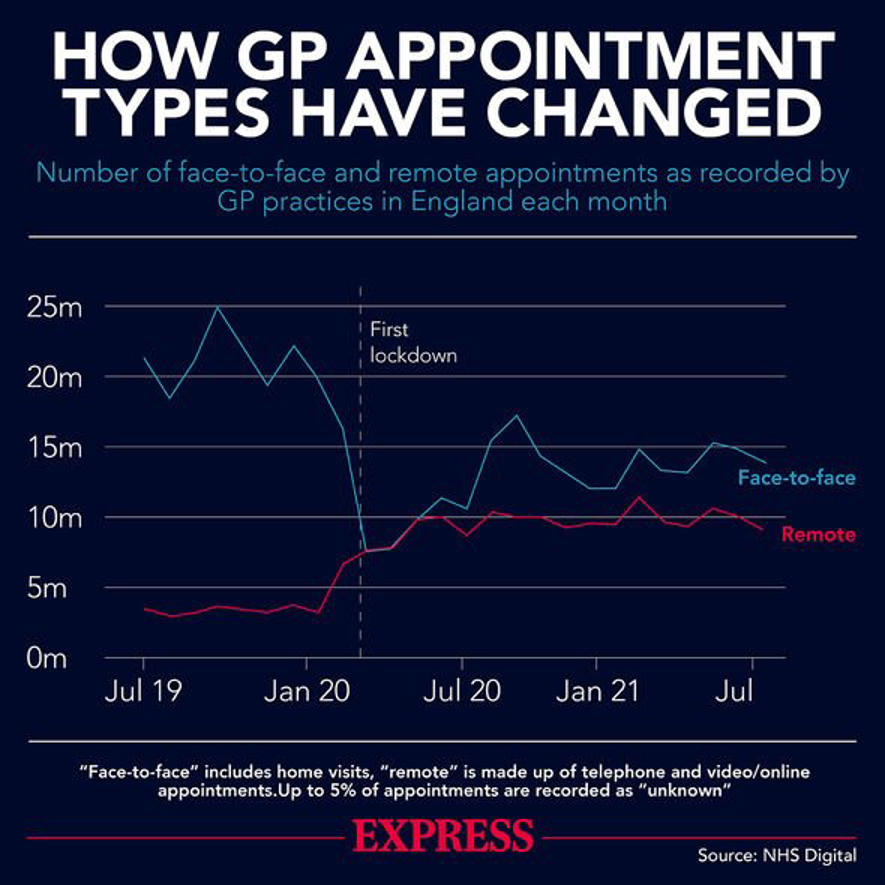 The same data shows the pandemic has left GP surgeries struggling to recover from practice-altering measures.

In August, GPs only saw approximately 58 percent of their patients for a face-to-face appointment, which some health conditions require.

Before the pandemic, doctors were seeing approximately 80 percent of their patients for in-person appointments. 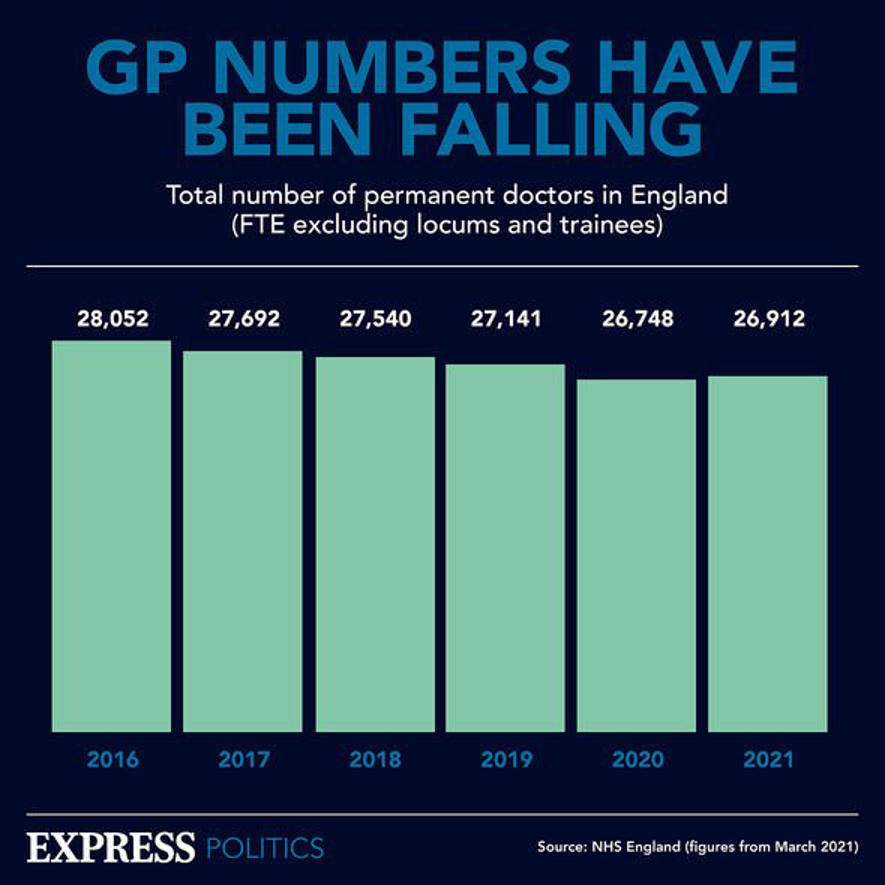 Surgeries are also suffering from a chronic shortage which came to a head this year.

The NHS England numbers for March each year since 2016 show a gradual decline in GP ranks.

Numbers have fluctuated over the last five years, and while the latest figures show a slight increase, there are only 164 more than 2020. 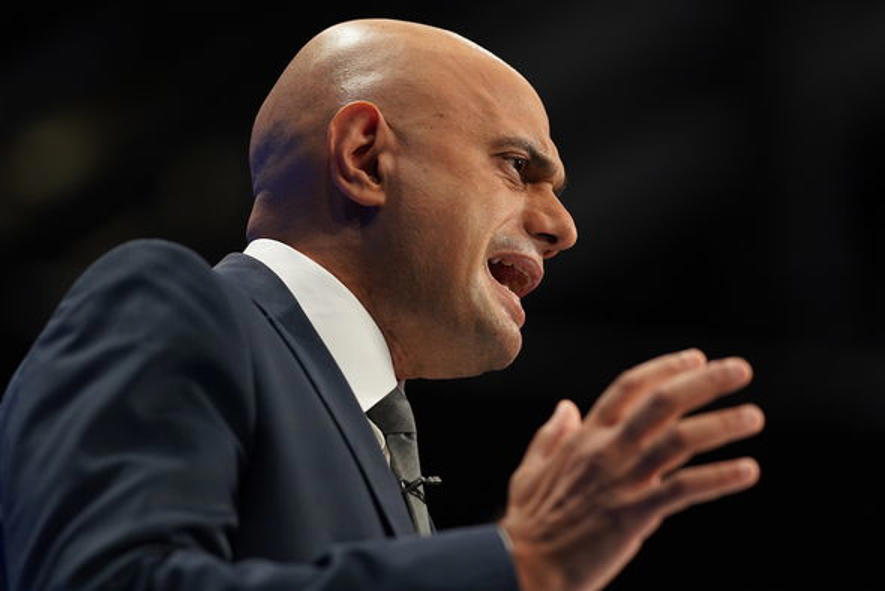 Approximately 100 to 400 staff vacated their roles on average before then.

These shortages, coupled with the stresses of the pandemic, have left GPs exhausted, with “burnout and stress” hampering their efforts.

Dr Preeti Shukla, Clinical Advisor to myGP and GP in East Lancashire, said “overwhelming” demands have left them unable to feel proud of the last year and a half they have spent serving the UK.

She said: “Exhaustion from the pandemic, coupled with a shrinking workforce, has left GPs topping the list for burnout and mental distress amongst all medical professions.”

“While my colleagues have much to be proud of, notably leading vaccine centres across the country, overwhelming patient demand has left no time for GPs to acknowledge the good they’ve achieved in the last eighteen months.”

The Government has provided some sticking plaster relief in a £250 million fund for temporary staff.

Health minister Sajid Javid has promised to return services to their pre-pandemic look.

But Dr Shukla said the “hybrid” model of face-to-face and remote appointments provides a “vital lifeline” for treating a spectrum of patients.

A century of tragedy: How the car and gas industry knew about the health risks of leaded fuel but sold it for 100 years anyway

For decades, most gas sold in the U.S. contained a lead additive. Per Magnus Persson via Getty Images On the frosty morning of Dec. 9, 1921, in Dayton, Ohio, researchers ... Read more »

John Lamparski/Getty “Real Housewives of New York” doyenne Bethenny Frankel is a cornerstone of the reality show’s world. Bravo has aired 13 seasons of the show so far, and Bethenny ... Read more »

© Provided by The Indian Express THE BSP won 19 seats in the 2017 Assembly elections, but months ahead of the 2022 elections, only three members can turn up for ... Read more »

Mumbai: The upswing in Indian equities continued on Wednesday, with benchmark indices posting their biggest single-day gain in six months, as concerns over the Omicron variant of the coronavirus ebbed ... Read more »

The Prime Minister has denied that he knew about the party at Downing Street – AP Boris Johnson was facing further questions as it emerged Conservative aides threw a separate ... Read more »

© Provided by Dezeen Very Peri blue colour Very Peri, described by colour company Pantone as “a periwinkle shade of blue,” has been named colour of the year for 2022. ... Read more »

© KSBW — The pandemic has left a lot of people on the Central Coast in need of assistance. The Salinas Salvation Army is reported that they are seeing nearly ... Read more »

So...where can we watch the Miss Universe 2021 coronation night?

© Provided by Cosmopolitan Philippines You guys, it’s that time of the year again! The Miss Universe 2021 coronation night is all set for December 12, 7:00 p.m. in Eilat, ... Read more »

We know Beatrice Luigi Gomez can serve the fashion, the face, and the body. But in recent videos of her coming out on social media in the lead-up to the ... Read more »

© AP The Prime Minister has denied that he knew about the party at Downing Street – AP Boris Johnson was facing further questions as it emerged Conservative aides threw ... Read more »

Rio Ferdinand: Jude Bellingham, 18, improves every team on the PLANET

As the Coalition and Labor pretend Australia's ageing coal plants have a future, the figures don't add up

© Provided by The Guardian Photograph: Dan Himbrechts/AAP Just how much coal-fired power will Australia have left running in 2030? It has become a sensitive question for the country’s major ... Read more »

Plan B: Work from home but Christmas parties can go ahead, Boris Johnson tells public

© Provided by CinemaBlend Alex Levy looks angry on The Morning Show. When it comes to Jennifer Aniston, her career has been filled with notable roles and countless lighthearted hits. ... Read more »

CHICAGO (AP) — A prosecutor told jurors Wednesday there is “overwhelming evidence” that Jussie Smollett lied to Chicago police about being the victim of an anti-gay, racist hate crime, while ... Read more »

Brian A. Steel, vice president of the Fraternal Order of Police Capital City Lodge No. 9 Citing the shooting of a deputy U.S. Marshal a day after two children and ... Read more »

Cabrini Stott Investigators are asking the public for help locating a 15-year-old girl last seen Sunday in the 5800 block of Village Plaza South Drive, according to the Indianapolis Metropolitan ... Read more »

What you see is what you get: Astro ID A40 TR headset impressions

© Provided by Dot Esports Gaming headsets offer a variety of designs and choices, but few options allow buyers to leave a mark on their gear. Astro Gaming is one ... Read more »

Pokémon Legends: Arceus might have a Hisuian Voltorb form, teased by Pokémon Company

Tata Motors to invest over $1 billion in CV business

Govt to move SC, request polls be held for all seats or postponed completely

In fray: Two with no edu qualification, 14 dropouts

After BJP, AAP releases its list of star campaigners

‘Symbol of transition': Pantone's color of 2022 is Very Peri