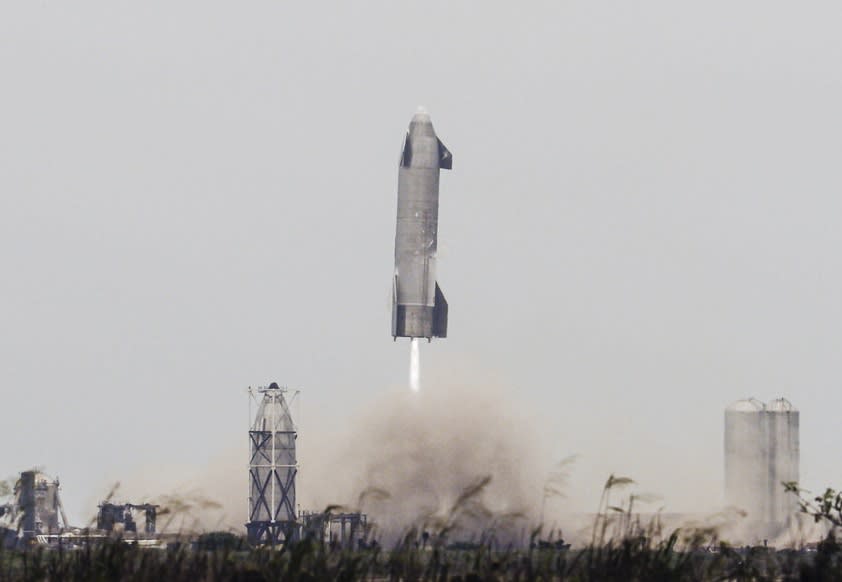 Starship prototype SN15 returns for a landing on May 5, 2021 after a high-altitude flight test.SpaceX

Between Elon Musk's two largest companies, investors and experts have a long-term favorite.

Most “institutional investors and industry experts” surveyed by Morgan Stanley expect SpaceX to become more valuable than Tesla, and see it as a more attractive investment.

“The majority of our clients (by survey and client discussions) believe SpaceX could ultimately command a higher valuation and significance than even Tesla,” Morgan Stanley analyst Adam Jonas wrote in a note on Tuesday.

Tesla has a market value of $858 billion. SpaceX reached a valuation of $100.3 billion after a secondary share sale, CNBC reported earlier this month.

Morgan Stanley issued the survey about Musk's companies with two questions: “Which do you think is a more attractive investment from here” and “which do you think has the potential to be a more valuable company over the long term.”

Out of 32 responses, 63% of those Morgan Stanley surveyed answered SpaceX to both questions.

“From our investor conversations, the sentiment on SpaceX has increased substantially along with the company's valuation in the private market,” Jonas said.

SpaceX: the “Apex Player” in space

Jonas said that “investors are beginning to appreciate the potentially wide-ranging use-cases for SpaceX's reusable launch architecture across communications, transportation, earth observation and other space-related domains.”

SpaceX is “clearly seen” as the “Apex Player” in the global space industry, Jonas said. The sentiment shows in its soaring valuation, which makes it the second most valuable private company in the world, according to CB Insights.

The company's valuation has spiked in the last few years as SpaceX has raised billions to fund work on two capital-intensive projects: Starship and Starlink.

Starlink is the company's plan to build an interconnected internet network with thousands of satellites, known in the space industry as a constellation. The project is designed to deliver high-speed internet to consumers anywhere on the planet.

SpaceX has launched 1,740 Starlink satellites to date. The network has more than 100,000 users in 14 countries who are participating in a public beta. Service is priced at $99 a month.

Starship is the massive, next-generation rocket SpaceX is developing to launch cargo and people on missions to the moon and Mars. The company is testing prototypes at a facility in southern Texas and has flown multiple short test flights.

Reaching orbit is the next step in testing the rocket. SpaceX is awaiting regulatory approval for its next launch.

“In our view, having access to nearly unlimited sources of capital will be an extremely important part of the narrative around building the space economy,” Jonas added.

Morgan Stanley, in a separate note on Monday, also said that “more than one client” has suggested that Musk may become the first trillionaire because of SpaceX.

‘Bitcoin creator' can keep huge gold mine of 48 billion euros

US house: stricter on imports from China's Xinjiang region

Photo: ANP The US House of Representatives voted on Wednesday (428-1) for a stricter import policy for products coming from China’s Xinjiang region. Companies that want to ship products from ... Read more »

At present, the real estate market seems to be in favor of property buyers, thanks to prices that have remained largely stable in recent years, home loan interest rates that ... Read more »

The Monetary Policy Committee (MPC) members decided to keep interest rates unchanged, at least for now. Broadly, the path of interest rate from now onwards is upwards, which is referred ... Read more »

IIFL Home Finance (IIFLHF) has launched non-convertible debentures (NCD) for investors. Are the interest rates attractive enough in light of the risks? Should you invest in this NCD? What’s on ... Read more »

Dollar up to 73.65 rubles, euro not changed on Moscow Exchange

The dollar went up by 6 kopecks Read more »

Gold Prices, Silver Prices Gold prices were flat on December 9 in the international markets as the US dollar and Treasury yields firmed ahead of key inflation data that could ... Read more »

Representative image Prestige BioPharma Ltd, a Singapore-based firm and Dr. Reddy’s Laboratories Ltd., on Thursday announced that the two companies have entered into a binding agreement for an exclusive partnership ... Read more »

Gland Pharma share price advanced 2 percent in the early trade on December 9 after the company received a tentative approval from the United States Food and Drug Administration (USFDA) for ... Read more »

Consumer confidence improved for a third straight month in November to reach a seven-month high, according to a survey by the University of the Thai Chamber of Commerceshowed on Thursday. ... Read more »

The highest transaction price in the non-mature estates is a $970,000 five-room loft unit at Treelodge @ Punggol. SINGAPORE – Housing Board resale flat prices rose for the 17th consecutive ... Read more »

Representative Image (Source: ShutterStock) Biocon is in talks with Mylan for a merger of Biocon Biologics with Mylan’s biosimilar business to achieve scale and unlock value, sources with direct knowledge ... Read more »

Boris Johnson was speaking at the annual gathering of the Confederation of Business Industry (CBI). British Prime Minister Boris Johnson on Wednesday announced tougher measures such as work from home where possible, ... Read more »

Omicron could spread faster but it''s still not certain: WHO

America’s Last Popeyes Buffet Says It’s Closing Forever The last remaining Popeyes buffet in the US has officially closed due to the pandemic that shuttered dining rooms, according to radio ... Read more »

Source: Reuters Apple Inc is within striking distance of a $3 trillion market capitalization, a milestone that would make it as big as the world’s fifth largest economy after Germany, ... Read more »

With large appetite for growth, organised restaurants may see 15% CAGR till 2025

The Indian food service industry has had a roller-coaster ride in the past two years, with coronavirus-induced lockdowns disrupting operations, leading to huge losses in the initial months, followed by ... Read more »

The watchdog says it will bring forward within weeks a series of reforms to demonstrate it is serious about the need for reform within the market after it was found wanting during the spike in wholesale energy costs this year. Read more »

Kerala lottery Result: 'Karunya Plus KN-398' lottery winners to be announced at 3 pm

Kerala had set up India’s first lottery department in 1967. Kerala Lottery Result: The Kerala State Lottery Department will announce winners of the ‘Karunya Plus KN-398’ lottery on December 9 ... Read more »

Google to give additional $1,600 staff bonus globally this year

Alphabet Inc’s Google said on Wednesday it will give an additional bonus to its employees globally this year, as the tech giant pushes back its return-to-office plan. Google will give ... Read more »

South Africa has approved the use of Pfizer‘s coronavirus booster vaccine for people aged over 18 years, amid mounting concern following a record of almost 20,000 infections overnight, largely ascribed ... Read more »

Indranil Pan, Chief Economist at YES Bank A lot has been written about the second quarter GDP that came in at 8.4 percent year-on-year after a 20.1 percent spurt in ... Read more »

General Rawat was strong proponent of India-US defence partnership: US

The Indian Air Force on December 8 confirmed the demise of Chief of Defence Staff (CDS) General Bipin Rawat, his wife and 11 others who were on board a chopper ... Read more »

Lyft pushes back staff's return to office until 2023 at earliest

Lyft’s offices will fully reopen in February as planned but returning will be optional for the whole year. NEW YORK (BLOOMBERG) – Lyft said employees can work remotely for the ... Read more »

US dollar stays soft, with Omicron still top of mind

The dollar failed to pick up ground on most major peers on Thursday as markets saw optimism in early data hinting the Omicron variant of the new coronavirus may not ... Read more »

Zuckerberg, Chan to invest up to $3.4 billion for science advances

The company that runs the philanthropy of Facebook CEO Mark Zuckerberg and his wife, Priscilla Chan, is investing up to $3.4 billion to advance human health over 10 to 15 ... Read more »

Indian Paints Industry: Hoping for gloss to return by end of current fiscal

More companies in Asia seek carbon offsets after COP26; costs at top of range in Singapore

These 8 Nifty stocks are trading lower than 2020 levels. Take a look

Chinese stocks continue their gains on hopes for more support