© Jacques Poitras/CBC Belledune was supposed to be fully paid for by 2028. But N.B. Power changed that to 2040, despite warnings it would be stuck with a huge bill if coal was outlawed by the federal government.

Severe financial consequences facing N.B. Power over a requirement to shut the Belledune coal-fired generating station by 2030 are being aggravated by a controversial accounting decision the utility made years ago to slow down retirement of debt tied to the plant.

Last week, the federal government formally announced it was rejecting a New Brunswick government request that N.B. Power be allowed to operate Belledune until 2040, 10 years past a national deadline forbidding the generation of electricity using coal.

It’s a decision the utility has said will cost it up to $1.2 billion in financing and new energy expenses, and last week Premier Blaine Higgs said that could force the utility to look for up to $280 million a year more from its in-province customers to maintain service.

“Without Belledune, we could have electricity rates that go up 15 or 20 per cent,” said Higgs Friday.

Part of that enormous price tag is linked to unretired debt from the original construction of Belledune.

That debt was supposed to be eliminated prior to 2030, but won’t be because of an accounting change the utility made several years ago under then-CEO Gaëtan Thomas.

© CBC Former N.B. Power CEO Gaëtan Thomas announced the utility made a $12-million profit in the 2016 fiscal year. It had been an $8-million loss until the utility made a controversial accounting change to slow down the pace at which it retired the debt on two plants, including Belledune.

Plant initially on schedule to retire debt by 2028

Belledune opened in December 1993 after several years of construction, at a final cost of $1.17 billion.

That expense was to be depreciated, or fully settled, over 35 years and was on schedule to be retired in 2028, until the utility suddenly changed course in 2016.

With only 12 years to go until Belledune was fully paid off, the utility conducted an assessment of the plant’s physical condition, determined it could operate until December 2040, and added 12 more years to its accounting life and depreciation retirement schedule.

The change at Belledune, and a similar one made at Saint John’s Coleson Cove oil-fired generating  station, instantly saved N.B. Power $19.8 million per year in finance charges on the two plants at a time the utility’s finances were struggling.

In the 2016 fiscal year the accounting manoeuver suddenly turned what was going to be an $8-million loss at the utility into a profit. That allowed Thomas to announce $12 million in net earnings for the year.

But it also pushed Belledune’s debt retirement from 2028 to 2040, a move critics warned at the time would saddle the utility with a steep bill if Belledune was forced to close in 2030.

U.S.-based utility expert Robert Knecht argued at N.B. Power rate hearings held by the Energy and Utilities Board in 2017 that slowing down depreciation at both Belledune and Coleson Cove was a poor idea.

Knecht, who was hired by New Brunswick public intervener Heather Black to evaluate N.B. Power’s budget numbers, said that given federal government plans announced in late 2016 to impose carbon taxes and phase out coal, the utility could not bank on either generating station surviving until 2040.

“Given the large uncertainties associated with the recently adopted policy framework, I recommend that the proposed change in depreciation lives be deferred until such time as the economic and legal implications of the new framework for the long-term viability of these facilities is understood,” Knecht said in his written evidence at the hearing. 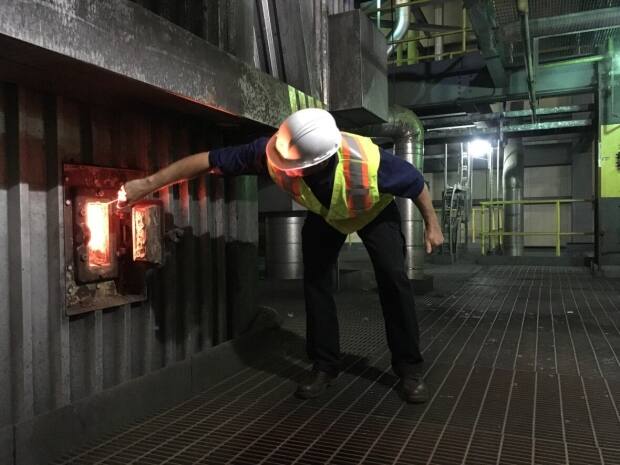 © Jacques Poitras/CBC News file photo N.B. Power claims closing the thermal generating station in Belledune in 2030, 10 years earlier than it had hoped, will cost it up to $1.2 billion.

Former senior N.B. Power executive Bill Marshall agreed with Knecht, and showed up at a public hearing sponsored by the EUB as part of those hearings to say so.

“I think that the amount of uncertainty there is around the carbon future outgoing, this is not the time to change the lives of those power plants,” said Marshall.

At the time of the accounting change, N.B. Power still had $440 million tied up in Belledune.

Instead of eliminating that by 2028, the new plan was to shave the amount down to $200 million by 2028 and use the following dozen years to retire the rest.

Stretching Belledune’s accounting life cut depreciation expenses and boosted the utility’s bottom line in the short term, but if Ottawa stuck to its 2030 deadline on using coal the change promised a big bill for unretired debt at the plant down the road.

EUB board member Michael Costello was baffled by the move.

“Extending the life of a coal-fired facility, does it just not strike you as kind of odd in this day and age with what we are heading into,” asked Costello.

N.B. Power argued the move met accounting standards and was appropriate given there was a chance it might be able to operate Belledune until 2040 if it could secure a so-called equivalency agreement.

The utility was hoping Ottawa would allow it to reduce Belledune’s annual output of emissions in exchange for spreading them over a longer period of time. It told the 2017 hearing that until it received a firm rejection, it would account for Belledune as being viable until 2040.

“So given that we don’t know the what, when or how, this is the best information that we have,” N.B. Power senior vice-president Lori Clark said.

The EUB eventually approved the accounting change and, since the 2016 fiscal year, N.B. Power has saved itself $91.7 million in depreciation charges by slowing the retirement of Belledune’s debt. But those amounts didn’t go away. They are still owed and now due much sooner than the utility planned on.

Psych evaluation for teacher who committed indecent acts on student, 15, in 2011

Lara Dutta reveals Salman Khan wakes up only post 12 am, calls her at midnight

Dollar Down, Yen Reacts to Bank of Japan Policy Decision

Brock Nelson was making a pregame drink on Monday night when Barry Trotz popped into the room. “Hey, what’s up?” Nelson recalled him saying. “Everybody ready to go?” It wasn’t ... Read more »

To the moon: AFL secures landmark deal with Crypto.com

The AFL has confirmed a five-year partnership with Crypto.com as the competition’s official cryptocurrency exchange. In addition, the league’s video review system will now bear the sponsor’s name – the ... Read more »

Samsung has announced the Exynos 2200, its new in-house mobile processor for smartphones. It’s the first mobile system-on-a-chip to include a GPU with AMD’s RDNA 2 graphics architecture, enabling features ... Read more »

Samsung has announced the Exynos 2200, its new in-house mobile processor for smartphones. It’s the first mobile system-on-a-chip to include a GPU with AMD’s RDNA 2 graphics architecture, enabling features ... Read more »

— The government will start rolling out COVID-19 vaccines in seven pharmacies in the National Capital Region (NCR) on January 20 to 21 to allow them to administer the shots ... Read more »

PANAMA CITY (Reuters) – The Panamanian unit of Canadian miner First Quantum Minerals has agreed with Panama’s government to increase royalty payments at its flagship copper mine, the company and ... Read more »

What the papers say – January 18

© Provided by Al Jazeera A tactical guided missile is launched, according to state media, at an undisclosed location in North Korea, in this photo released January 17, 2022 by ... Read more »

In Gadgets and Gizmos, the latest Teamfight Tactics set, 3-star 5-cost units are incredibly powerful and can win games on their own against entire nine-unit teams. How quickly can a ... Read more »

Journalist claims virtual E3 2022 could be cancelled as well

© Provided by GamePur Over ten days ago, the Entertainment Software Association decided that E3 2022 won’t be an in-person event to prevent the spread of the Omicron variant of ... Read more »

A mother whose twins were born prematurely while she was in a coma for 21 days after becoming critically ill with Covid has urged pregnant women to get vaccinated. Sultana ... Read more »

Shapewear is the perfect foundation for any outfit, helping to contour your silhouette and giving you the confidence to try on anything you want. The clothing trend has become very ... Read more »

“That’s my sister. That’s all I got. If anybody knows anything, just let her go,” said Lydia Smith, Ahreal’s sister. Northumberland County Sheriff’s Virginia police have arrested a man in ... Read more »

Getting rid of BJP will be a 'greater azadi' than freedom from British rule: Mehbooba Mufti

© Provided by Zee News Jammu: PDP president Mehbooba Mufti took a sharp dig at the Bharatiya Janta Party and said that ‘getting rid’ of BJP in UP will be a ‘greater ... Read more »

It was a first half of football to forget for Kyler Murray and the Cardinals. Arizona left the first quarter of its wild-card matchup against the Rams trailing 7-0 with ... Read more »

We Finally Know Who Ethan Hawke Is Playing In Moon Knight

Disney+/YouTube We finally got our first trailer for “Moon Knight” after several teases peppered throughout the last few months. The majority of the pulse-pounding new teaser revolved around Oscar Issac’s ... Read more »

© Provided by Geek Culture The trailer for Moon Knight is finally here. The new Disney+ series starring Star Wars alum Oscar Isaac is one of the Marvel Phase 4 ... Read more »

Singaporean singer Joanna Dong will be organising and hosting an epic Lunar New Year concert at the Sands Theatre in Marina Bay Sands. The singer, best known for being a ... Read more »

MANILA has collaborated with a private medical technology company to open its first new physical therapy and rehabilitation center in one of its government hospitals where a high-tech robotic system ... Read more »

Nikita Jasmine has left quite the impression on TV viewers after the brash star’s appearance on Married At First Sight. The 27-year-old north east native left fans flocking to social ... Read more »

‘I want to express myself on the field': South Africa speedster Marco Jansen on duel with 'good friends' Bumrah

Days after getting into an on-field tussle with India’s premier seamer Jasprit Bumrah, 21-year-old Marco Jansen opened up about the incident. Sharing his thoughts, Jansen said that he doesn’t have ... Read more »

‘Rohit Sharma or Ravichandran Ashwin must be stop-gap Test captain'

© Provided by The Times of India MUMBAI: Indian cricket is in the midst of a massive debate: Who should be the next Test captain of India post Virat Kohli ... Read more »

Drag Race UK vs The World: Meet the contestants competing to be named Queen of the World

Bigg Boss 15: Karan Kundrra's father welcomes Tejasswi in family, says ‘She is in the heart of the family now'

No prescription is required to get tested if you are showing any symptoms of Corona: Satyendar Jain

Betty White's assistant shares one of her last photos