Six Germans accused of stealing nearly £100million worth of jewellery in a 2019 heist have gone on trial in Dresden, with the whereabouts of the treasures still a mystery.

The defendants, who are aged between 22 and 27 and said to be part of the notorious Remmo criminal family, are charged with aggravated gang theft and serious arson.

They are suspected of breaking into Dresden’s Green Vault Museum in the early hours of November 25, 2019 and stealing 21 pieces of jewellery containing more than 4,300 diamonds with an estimated value of 113million euros (£94million).

The treasures include a sword with a diamond-encrusted hilt and a shoulderpiece which contains the famous 49-carat Dresden white diamond.

The director of Dresden’s state art collection, Marion Ackermann, had refused to put a value on the stolen items, calling them ‘priceless’. 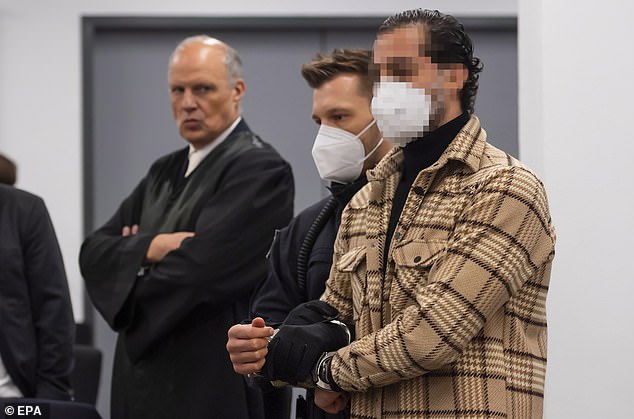 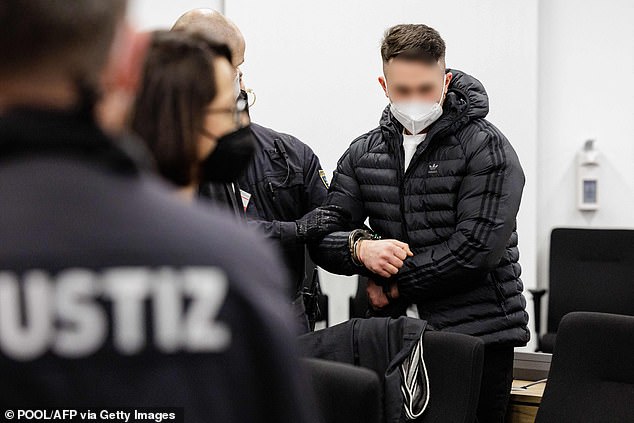 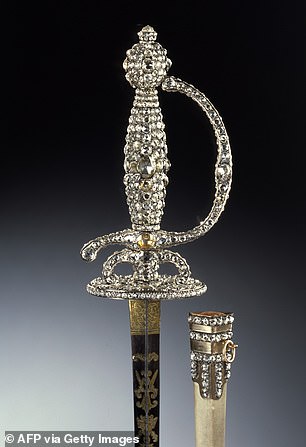 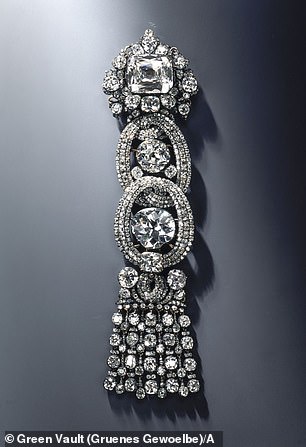 The stolen items included a sword (left) whose hilt is encrusted with nine large and 770 smaller diamonds, and a epaulette (right) which contains the famous 49-carat Dresden White diamond 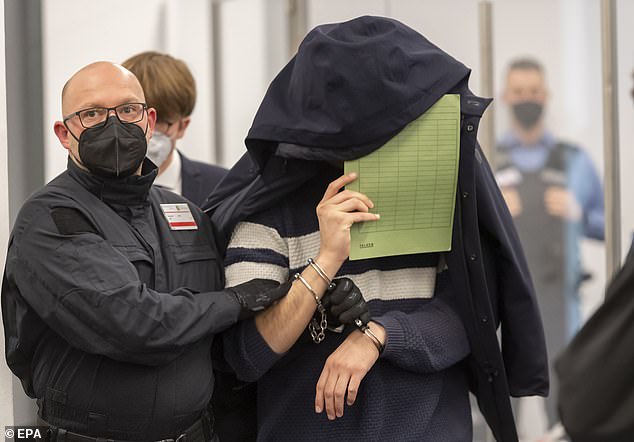 The stunt also caused around a million euros’ worth of damage to the museum and car park.

Reading the indictment in court, prosecutor Christian Weber said the suspects had stolen ‘unique and irreplaceable treasures… of outstanding cultural and historical significance’.

One of the suspects covered his face with a grey hooded sweater, while others hid behind files and folders.

The robbers allegedly took just eight minutes to pilfer the treasures, causing a power cut before breaking in through a window with which they had previously tampered.

Two men armed with an axe stole the jewels before fleeing in a car, which they torched in an underground car park. 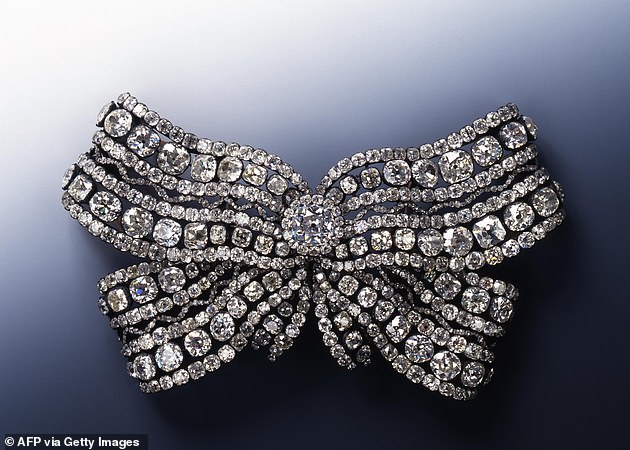 Armed with a loaded revolver and an automatic-loading gun with a silencer, the men allegedly broke into the Green Vault museum in Dresden in the early hours of November 25, 2019, making away with 21 pieces of jewellery encrusted with more than 4,300 diamonds 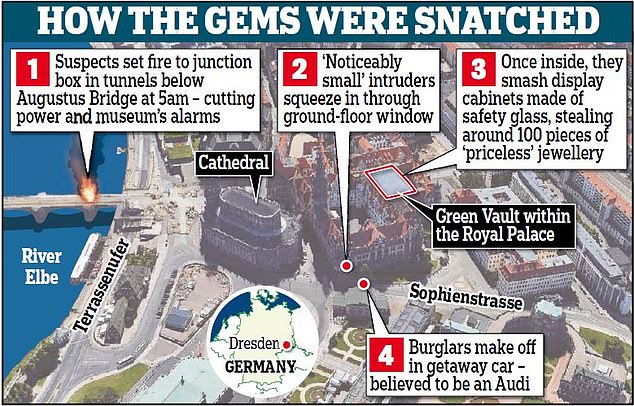 The jewels were stolen after thieves set fire to a junction box, cutting power to the museum’s alarms, then managed to get through a small gap in a grille of a window on the ground floor 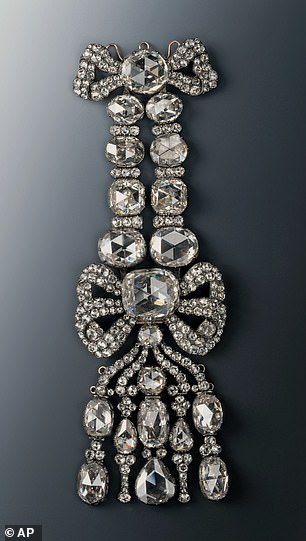 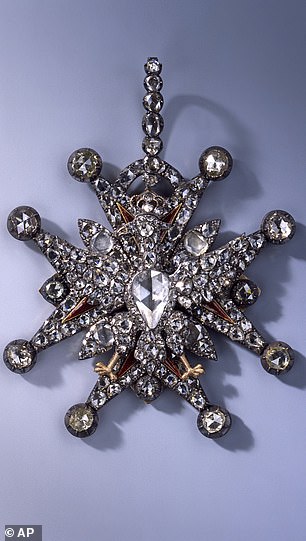 The thieves grabbed 21 pieces of jewellery and other valuables from the collection of the Saxon ruler August the Strong, encrusted with more than 4,300 individual diamonds.

Unarmed museum security officers noticed the robbery but could not intervene as they were not allowed to endanger themselves, Der Spiegel newsmagazine reported.

Prosecutors said in September the defendants had not provided any information on the allegations.

Police combed through CCTV footage to identify the suspects, who are all members of the so-called ‘Remmo clan’, an extended family notorious for ties to organised crime in Germany.

The investigation was codenamed ‘Epaulette’ after the glittering shoulderpiece. 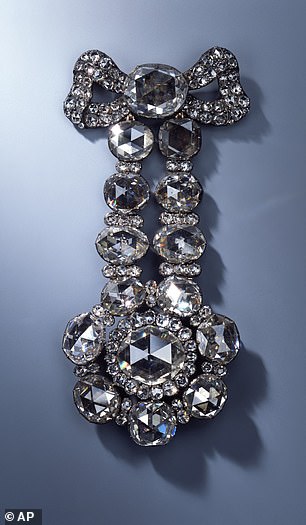 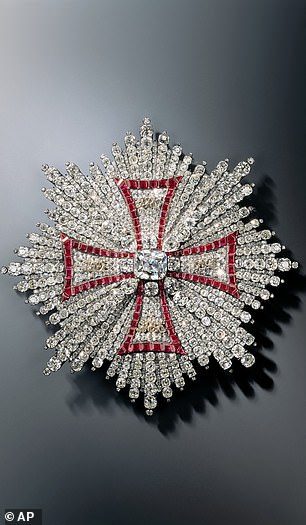 Three of the suspects were arrested after 1,600 police raided 18 Berlin properties in November 2020.

Another two – twin brothers named by police as Mohammed and Abdul Majed Remmo – were on the run for several months, but were caught in December 2020 and May 2021 respectively.

Two of the suspects on trial for the Dresden heist are still serving out juvenile sentences for involvement in the theft of a 100kg gold coin worth £3million – which has also never been found.

Investigators in 2020 targeted the Remmo family with the seizure of 77 properties worth a total of £8million euros, charging that they were purchased with the proceeds of various crimes, including a 2014 bank robbery. 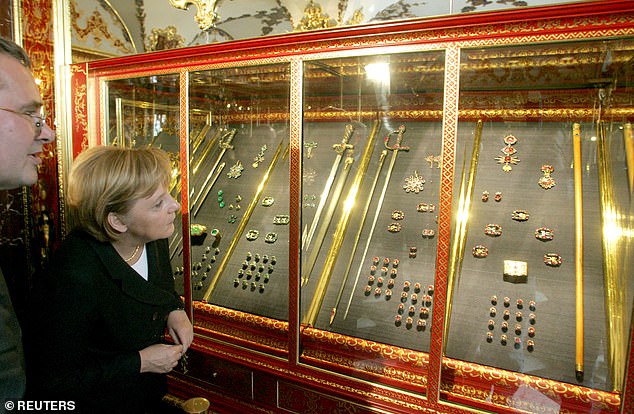 The Dresden trial, which is expected to run until October, is being heard in a juvenile court because two of the suspects were minors at the time of the crime.

In addition to the six main suspects, four other men are being investigated on suspicion of aiding and abetting by scoping out the crime scene the previous day.

Founded by Augustus, Elector of Saxony, in 1723, the Green Vault is one of Europe’s oldest museums.

After the Royal Palace suffered severe damage in World War Two, the museum remained closed for decades before it was restored and reopened in 2006.

The treasures survived Allied bombing raids in World War Two, only to be carted off as war booty by the Soviet Union.

They were returned to Dresden, the historic capital of the state of Saxony, in 1958.

Experts have warned that the chances of recovering the stolen jewels are slim, with the precious stones likely re-cut in the time that has lapsed since the crime.