Megan Mirfin always dreamed of being an entertainer.

Ever since she was a little girl, she has been determined to perform infront of crowds.

“I just love being on stage,” said the single mum from Ossett, West Yorkshire.

Click here for more headlines from the Northern Agenda team

But Megan fears that her baby boy will face the same barriers she did as a youngster growing up in the former mining town of Ossett, where opportunities are sparse.

“If Ernie wants to be a performer, he is a little bit screwed around here,” said the 23-year-old, who gave birth to her first child in September 2021.

“I think he might have to move away from home when he is 18 to chase his dreams.”

Megan, who was diagnosed with Multiple Sclerosis (MS) shortly before falling pregnant with Ernie, isn’t alone in fearing for her baby’s future. Thousands of families across Yorkshire are likely to be thinking the same.

West Yorkshire has the country’s highest crime rate, while Barnsley in South Yorkshire has the highest pandemic death rate in the UK. In Bradford, 33 per cent of all neighbourhoods are among the most deprived in England.

The government has pledged to Level Up the country, with 12 bold ‘missions’ including improving life expectancy, wellbeing and education in areas outside London and the south east.

But it’s a gargantuan challenge after decades of underinvestment in areas outside the capital.

YorkshireLive has today joined forces with Reach plc titles across the North and the Midlands to tell Boris Johnson’s government: “Don’t leave us behind”.

For all Michael Gove’s promises to end this “historic injustice” of the north-south divide, the gap is huge.

The Levelling Up secretary’s constituency of Surrey Heath has a far better weekly average wage, employment rate and life satisfaction than the Wakefield constituency where Megan now lives with Ernie, who recently turned five months old. 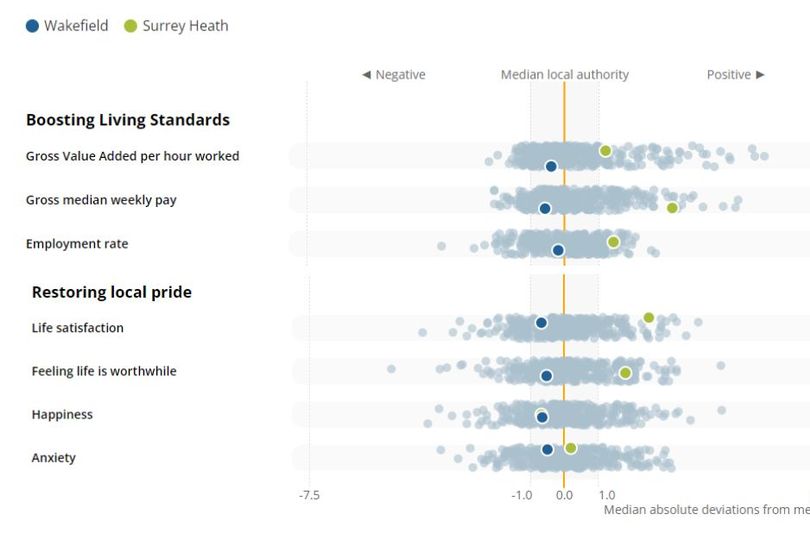 © ONS There are huge disparities between living standards in Wakefield and Surrey Heath, the constituency of Levelling Up minister Michael Gove

The lack of opportunities in and around Wakefield, one of few English cities without a university, prompted Megan to leave home at the age of 19 to pursue her goal of becoming a children’s entertainer.

It meant relocating an hour-and-a-half away to Cleethorpes, where she got a job at one of the seaside town’s holiday parks as a singer and entertainer.

“Having to move over there just for my job and what I wanted to do is ridiculous,” said Megan.

“The line of work that I have gone into, there is literally nothing around here. There’s just nothing on offer.”

After two years in Lincolnshire, Megan took the bold decision to move even further away when she accepted a job on a holiday park in Devon.

But soon after arriving, she was hit with a double blow.

Not only did Covid-19 decimate the entertainment industry, but Megan was also diagnosed with MS, a lifelong condition that affects the brain and nerve cells. While there are treatments to ease the symptoms, there is no cure and Megan often struggles with her vision and mobility problems.

“Doctors said that I was more than likely to be in a wheelchair by the time I was 30. I was told that if I wanted to have kids, I should maybe try now.”

Megan, who moved back to Ossett after work dried up at the start of the pandemic, fell pregnant at the end of 2020.

Motherhood has brought “an overwhelming amount of love” for her baby boy, but the daily challenges of commuting in the West York shire town have become even more pronounced since Megan was diagnosed with MS. Her muscles are starting to get weaker and she often struggles to get Ernie’s pram on the bus.

At the moment, the five-minute bus journey to her mum’s house is manageable, but the 117 Arriva route is set to be axed at the end of this month.

Unless last-ditch talks are able to save the threatened bus route, it will soon mean Megan has to catch two buses to get to her mum’s house. Instead of taking five minutes, it will take an hour.

“It really annoys me because my muscles aren’t particularly strong,” said Megan.

“It’s a nightmare getting on the bus with the pram and now I will have to get on two buses to get to my mum’s. It’s very, very frustrating.”

Anand Menon, a politics and foreign affairs professor at King’s College London, used to live in Wakefield and is all too aware of the issues faced by people across the region.

“Wakefield’s problem isn’t a lack of connectivity with London or with Leeds, because the trains are brilliant,” he told BBC Radio 4.

“Wakefield’s transport problems are within Wakefield and the five towns. It’s getting from one end of Wakefield to the other that is the real problem, rather than connectivity with cities nearby.

“In Wakefield, communities grew up around the pits because that’s where the jobs were. Now what you find is some of those mining communities are essentially cut off from the places in the region where the jobs are because bus services are being cut.

“It’s just very, very hard to get around the Wakefield district.”

While the number of bus journeys made in London also fell over the same period, the drop was smaller (11 per cent).

In a bid to boost public confidence in the region’s bus networks, Tracy Brabin has made better connectivity one of her key aims since being elected as the first-ever West Yorkshire mayor in 2021. She wants to bring buses back under public control and introduce simpler fares and contactless ticketing methods.

In London, single bus fares cost just £1.55 and the daily cap is £4.65, but the cost of public transport in West Yorkshire is a major stumbling block for low-income families.

“I know a carer who pays £10-a-day to get the person she cares for,” Ms Brabin told YorkshireLive .

“This is not good enough.”

Levelling Up minister Mr Gove has said he wants to help regions move towards a London-style public transport network, but Megan is not convinced the government’s latest policies will bring about meaningful change.

“The transport is definitely the worst thing [about living in Ossett],” she said.

“I’m not hopeful that Ernie will be able to get around Ossett easier when he grows up.

“The transport around Ossett is getting worse. They are cutting buses, but not adding any.”

Should Boris Johnson should resign after the Sue Gray report?

In fact, critics have pointed to a number of contradictions in the Levelling Up White Paper since it was published last week.

The long-awaited Integrated Rail Plan fell short of expectations, with HS2 no longer coming to Leeds and a new train station in Bradford dismissed. Meanwhile, p ublic health funding faces a real-terms cut over the coming three years and the Northern Powerhouse Partnership revealed the government’s Shared Prosperity Fund – the replacement for EU funding – will mean some areas will actually receive less money than they did before.

While she is desperate to resume her career when she can, the lack of job opportunities and haphazard public transport networks make it a minefield for single mums like her.

“I would love to chase my dreams locally,” said Megan. “If I could go back to work I would, but there’s nothing here.

“I could only get an office job or a supermarket job, but around here there are no opportunities to be an entertainer.

“It is so tough to get around and it’s only getting worse.”

To get the latest email updates from Yorkshire Live, click here .