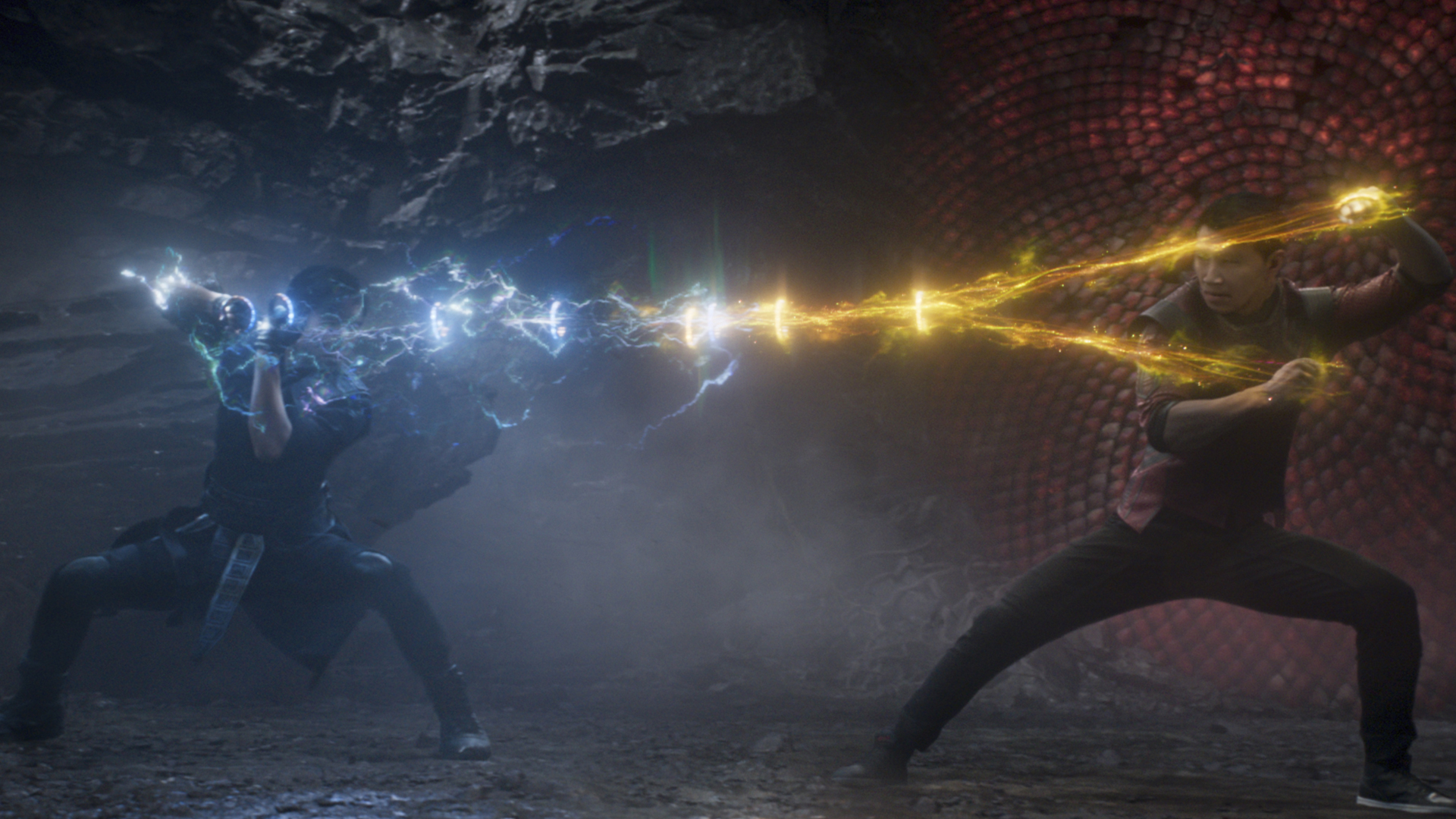 Shang-Chi’s Ten Rings weapons were nearly identical to a key part of their original comic book look, according to a member of the movie’s VFX team.

Speaking to ComicBook.com, Weta Digital’s Sean Walker explained that each of the rings almost had a color palette that was very similar to their comic counterparts.

As Walker revealed, each of Wenwu’s Ten Rings attacks, such as when Shang-Chi’s father uses them as a whip weapon, had their own individual color scheme so audiences could follow each offensive action as they were wielded.

However, in order to simplify things for viewers, Shang-Chi’s VFX team decided not to move forward with that idea. Instead, the choice was made to give distinct color palettes to Shang-Chi and Wenwu, so that audiences could determine which individual was wielding certain rings at any given point.

“The Ten Rings actually went through a range of color changes,” Walker said. “At one point, each individual effect had its individual styled use of the Rings. For example, when Wenwu is creating a bustle out of them, or a whip, or projectiles, they actually had their own unique color scheme, they were all in a similar color palette.

“But in order to really clearly define this is Wenwu and this is Shang-Chi, we stuck to a much narrower color palette. So Shang-Chi’s colors actually mimic his mum’s color palette, so we looked to her for her greens and for yellows. Especially in the initial fight between his parents.” 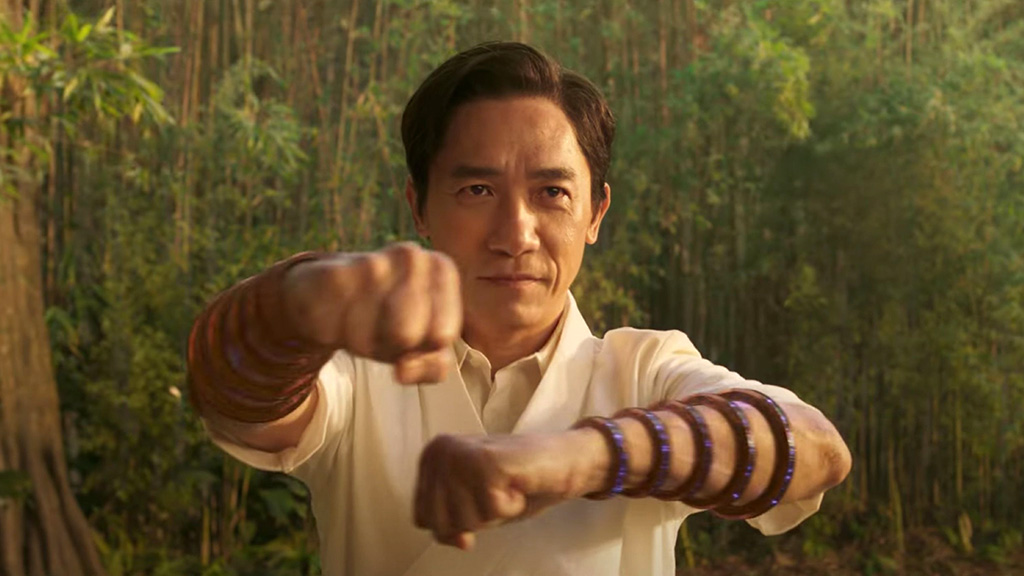 This isn’t the only incident where Marvel decided to change elements for Shang-Chi’s live-action debut.

The studio’s decision to remove the racially insensitive stereotypes surrounding the character have, naturally, been welcomed by audiences. That includes changing the names of other characters including Wenwu and the mystical dragon known as The Great Protector.

The size of the rings, too, was altered. Historically in the comics, the rings are pieces of jewellery (they’re also of alien origin) that the Mandarin wears on his fingers. Each ring allows the Mandarin to wield different powers, such as manipulating objects at an atomic level, project flames or electricity, and alter peoples’ thoughts.

In Shang-Chi and the Legend of the Ten Rings, though, the rings are used in unison to create weapons like whips, produce concussive blasts or as projectiles that stun and hurt enemies.

So the removal of the Ten Rings’ original colors wasn’t much of a stretch for the film’s post-production team. As Walker says, if anything, simplifying their color schemes helps audiences to work out which individuals are wielding the Ten Rings at any one time. Giving them individual hues, or using different color shades for specific weapons or abilities, would have been confusing to follow.

It’ll be interesting to see if the Ten Rings make future appearances in the MCU. Given Shang-Chi’s post-credits scenes, however, they’re sure to play some role – and it’ll be intriguing to see if those original color palettes end up making it into future Shang-Chi films. After all, he’s the only one who can wield them (for now anyway), so there’s no need to distinguish between characters who brandish them.

8 Incredible Dia de los Muertos Celebrations Across the US

Live performances are back for Metro Mix Chorus!  © Special to the Press-Citizen Lynda Black-Smith It has been a looooong time! But the women of Metro Mix Chorus have been safely ... Read more »

Stripe through Christmas concerts Toppers: ‘With pain in our hearts'

“We were so looking forward to it,” reads the statement on behalf of Gerard Joling, René Froger, Jeroen van der Boom and Jan Smit. “However, with pain in our hearts ... Read more »

Guns N’ Roses BottleRock has made playing until the plug gets pulled a rite of passage at their annual Napa, Calif., festival, where the event’s 10 pm curfew is enforced ... Read more »

The Neptunes Get in the Studio With A$AP Rocky, Chloe Bailey, Adam Levine & More: See Photos

Pharrell Williams Known for wearing many hats, Pharrell Williams’ producer cap is the one he started out in. The 48-year-old artist has long been a visible figure in pop culture, ... Read more »

Angelou Deign is a familiar face around the set of American Ninja Warrior. She probably knows every single competing Ninja by name, and probably a bunch of other details about ... Read more »

The presenter does not hide his anger. “Some bastard just hit our sweet cat and just drove on,” he writes on Instagram. “She is dead.” Not much later Dennis, who ... Read more »

Jeffrey Wright, who stars on “Westworld” and will appear in the upcoming “The Batman” film, reacts to Alec Baldwin shooting a prop gun which killed “Rust” director of photography Halyna ... Read more »

Bow Wow Confirms He's A Father Of Two, Refutes Past Tweet About Son

© Charley Gallay/Getty Images for Disney Bow Wow confirms that he is the father of a one-year-old named Stone Kamin. The rapper first revealed he had a son last September ... Read more »

A former Bangor Area High School band director who used a student’s trust and admiration to groom and sexually assault her for more than a year was sentenced Monday to ... Read more »

Central Florida can soon experience a star-studded lineup of country musicians all under one roof as the 26th annual K92.3 All Star Jam comes to Orlando later this year. Florida ... Read more »

Aespa Giselle of the K-pop girl group aespa has issued an apology via Twitter for mouthing a racial slur in a YouTube video featuring the group. On Saturday, the group’s agency, ... Read more »

Josh Gruss This week, Round Hill Music co-founder/CEO Josh Gruss will take two weeks off from running one of the more important new competitors in the music publishing business, but not for ... Read more »

© Foy: Maarten De Boer/Variety A buzzy TV series based on the book “An Ugly Truth: Inside Facebook’s Battle for Domination” is currently in the works — but the social ... Read more »

Drake Gifted Rolls-Royce He Used to Rent to 'Keep Up Appearances': 'Manifestation Complete'

As a Grammy-winning artist, world-famous rapper, and all-around musical legend, it’s hard to imagine that there was once a time when Drake couldn’t afford to live in the lap of ... Read more »

What to Eat and Drink at Outside Lands 2021

© Betsy Newman After a year off due to the pandemic, Outside Lands comes roaring back to San Francisco’s Golden Gate Park this Friday, October 29 through Sunday, October 31. ... Read more »

© Courtesy of Gap KPerryGap Katy Perry cozied up in comfy footwear for Gap’s new holiday campaign, “All Together Now,” which launched on her birthday today. The musician and UNICEF ambassador ... Read more »

© MEGA gwen-stefani-skirt-leggings-vegas Gwen Stefani is back and better than ever. The “Hollaback Girl” singer returned to the stage in Las Vegas this weekend for her new residency, performing in ... Read more »

Snoop Dogg mourns death of mom Beverly Tate: 'Mama thank u for having me'

The 50 Best Movies on Paramount+