Manchester United have been represented by plenty of footballers – but which former players are still playing professionally in 2021?

Of course, players like Jonny Evans and Ashley Young are still active but we wanted to dig a little deeper and find those whose continuing careers would come as a surprise.

And there are more former United players still active than you might have thought. We’ve picked out a few of those who you probably didn’t realise were still playing in 2021.

Infamous for his role in that ‘ghost goal’ by Pedro Mendes back in 2005, Carroll’s last game for the club was the FA Cup final defeat to Arsenal that same year.

After time with West Ham, Rangers, Derby, Odense, OFI Crete, Olympiacos, Notts County and Linfield, the goalkeeper’s career looked to be over after a serious knee injury during his time in Northern Ireland.

But the 43-year-old recovered and, after a brief period playing for junior side FC Mindwell, Carroll returned to the Irish League to sign for Dungannon Swifts in January 2021.

Tevez was always one of those players whose style of play demonstrated their total devotion to football so it’s perhaps no surprise that he’s still playing in 2021.

The former-Argentina international was most recently seen at Boca Juniors, where he won two league titles and scored 31 goals across three seasons with his boyhood team.

In June 2021, Tevez announced he was leaving the club and told reporters that he was “physically fit to continue but not mentally” and that he can continue to play “at the age of 42, but not in Boca Juniors”.

After becoming a cult hero at United because of his committed performances, Rafael was sold to Lyon by Louis van Gaal in 2015.

The Brazilian defender stayed in France for five years before a single-season spell at Istanbul Basaksehir, where he played in their Champions League victory over United in November 2020.

Rafael’s return to his native country this summer and currently plays for Botafogo – where legends such as Garrincha, Didi and Nilton Santos once made their name.

We all remember that goal, but anybody who could name the clubs that Macheda’s played at since that day in April 2009 would be well advised to go outside and get some fresh air.

After spells with *takes breath* Sampdoria, QPR, Stuttgart, Doncaster, Birmingham, Cardiff, Nottingham Forest and Novara, the striker is currently turning out with Panathinaikos in Greece.

And, with 36 goals in 98 appearances, he hasn’t done too badly at all. 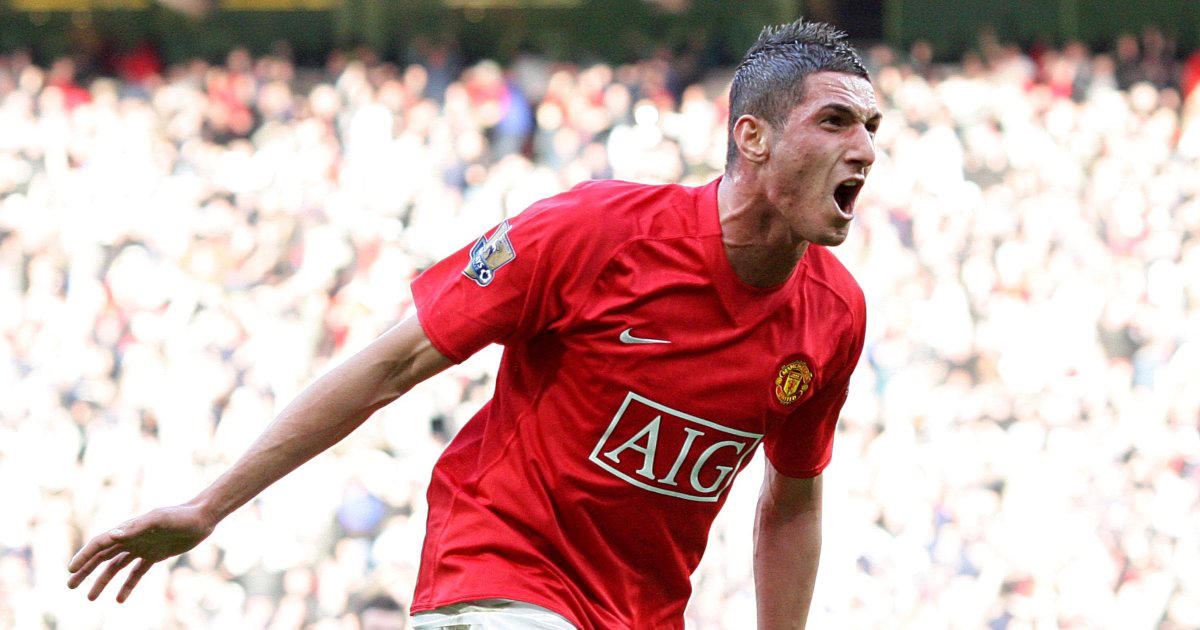 Since leaving Newcastle in 2016, Obertan has played for Anzhi, Wigan and Levski Sofia. This was once the man United signed to replace Cristiano Ronaldo.

While Obertan’s impact at Old Trafford was negligible, he is at least still playing professional football. After leaving Turkish side Erzurumspor this summer, the winger now plies his trade with US side Charlotte Independence who play in the second-tier USL Championship.

Remarkably, Obertan is still only 32. How did this happen?

Simpson made eight appearances for United, the last of which was an FA Cup win over Tottenham in January 2008, but is one of a select group of players who won the Premier League title after leaving Old Trafford.

That was part of Leicester’s incredible 2015-16 success and Simpson played 113 times for the Foxes over a five-year spell.

The 34-year-old is currently reunited with Nigel Pearson at Bristol City in The Championship as the West Country club looks to secure top-flight football for the first time since 1980.

Lindegaard was considered a potential future No.1 when he was bought in January 2011 as United looked to a future without the ageing Edwin van der Sar.

But despite making 19 league appearances in five seasons at the club, 10 of which came in the title-winning campaign of 2012-13, he never appeared likely to usurp David de Gea and make the goalkeeping position his own at Old Trafford.

After being sold to West Brom in 2015, Lindegaard had spells at Preston and Burnley (as recently as 2019 it says here) before spending the last two years with Helsingborg.

And it was in Sweden where the goalkeeper scored his first career goal in 2020, bringing some joy to a desperately difficult year.

One of the best things in football 🥰

A last minute equaliser by the goalkeeper

IF a prestigious beauty contest fosters “beauty with a purpose,” TV host-comedian-vlogger Eagle Riggs is proud to integrate his purposeful existence given these challenging times. © Provided by The Manila ... Read more »

Duterte asks mayors, barangay chairs to identify residents yet to be vaccinated

Pres. Rodrigo Duterte at Oct. 25, 2021 briefing President Rodrigo Duterte on Monday urged mayors and barangay captains to identify constituents who have not yet been vaccinated against COVID-19. “I ... Read more »

Cebu Pacific Budget carrier Cebu Pacific on Monday said four more local destinations in its network will no longer require RT-PCR or antigen tests before travel. In a statement, the ... Read more »

The Hottest Toys at Walmart, as Chosen by Kids for 2021

© ET The holidays are right around the corner and the holiday shopping season is starting, well, now. Luckily, Walmart just released their 2021 Top-Rated by Kids Toy List — a list ... Read more »

© AFP / Ted Aljibe DOH: Variant from Mauritius detected in Philippines MANILA, Philippines — One case of B.1.1.318 the new variant first reported in Mauritius in June, has been ... Read more »

VIDEO: Rocker who missed performing to a live crowd during lockdown gave secret solo concerts to the ‘grateful dead' in graveyards instead

A rocker who missed performing to a live crowd during lockdown found a captive audience by playing to the dead instead – staging secret concerts in graveyards. When Covid shut-down ... Read more »

‘My schedule is really packed': How COVID-19 has led to long wait times for tattoos

Delhi court: NIA didn't try to find out who made CD linking accused to banned outfit

© Provided by The Indian Express Discharging four accused in a terror funding case while noting that drawing final presumption not based on facts was dangerous, a Delhi court observed ... Read more »

On October 19, Kapamilya artist Ria Atayda shared her thoughts on the relevance of their upcoming series, Viral: Scandal to society. © Provided by LionhearTV During the media conference, she ... Read more »

VANCOUVER — A British Columbia Supreme Court judge has ordered the return of items seized from Meng Wanzhou during the Huawei executive’s arrest at Vancouver’s airport over an extradition request ... Read more »

© TheWrap Colin in Black and White In what could easily be described as a combination of “Malcolm in the Middle” and “Everybody Hates Chris,” the creation of “Colin in ... Read more »

© THE CANADIAN PRESS/Graham Hughes An Air Canada check-in area is shown in this file photo. Air Canada is launching a new self-testing program aimed at making it easier for ... Read more »

Recipes posted on TikTok are a hit with young Britons

© Provided by Daily Mail MailOnline logo They might not be dishes you would find skimming through the cookbooks of Jamie Oliver, Delia Smith or Nigella Lawson. But thanks to ... Read more »

© Provided by The Indian Express A week after the Union Ministry of Home Affairs (MHA) moved to extend BSF’s jurisdiction from 15 km to 50 km inside the international ... Read more »

CHB to sell 159 properties in e-auction

© Provided by The Indian Express The Chandigarh Housing Board (CHB) will soon put out around 159 residential and commercial properties for e-auction. The auction dates aren’t final yet but ... Read more »

Jennifer Cashman and her family lost virtually everything when their house in Paradise, California was razed by a wildfire — forcing them to join the growing ranks of climate migrants ... Read more »

The White House on Monday rejected another executive privilege request by former President Donald Trump over documents sought by a House committee investigating the Jan. 6 attack on the U.S. ... Read more »

© New Line/courtesy Everett Collection. We all know that the best way to spread Christmas cheer is singing loud for all to hear. But before you start caroling down the ... Read more »

The suspect in Monday afternoon’s shooting at Boise Towne Square mall is in critical condition after being shot by police, according to a news release. The Boise Police Department said ... Read more »

The claim: Resistance to COVID-19 vaccine mandates is responsible for supply chain backups Ice cream, books and Christmas trees could all be in short supply soon due to a complex ... Read more »

Lucknow witnessed high drama around midnight on Monday when Kiran Gosavi, the private detective from Mumbai who made headlines with his selfie with Shah Rukh Khan‘s son Aryan Khan after ... Read more »

The government plans to complete the privatisation process for 13 airports run by the state-owned Airports Authority of India (AAI) by the end of this fiscal year. “We have sent ... Read more »

ICICI Bank overtook Hindustan Unilever to become the fifth most valued company of India on Monday after the 10.8% surge in the share price boosted by strong September quarter results. ... Read more »

NHS could be unable to provide ‘care it needs to' for women giving birth over winter, top doctor warns

NHS may be left unable to provide “the care it needs” for women, a top doctor has warned (PA) Immense pressures facing maternity staff as Covid cases surge could mean ... Read more »

Kristen Stewart: Don't Want Queer Superheroes? You Belong in the Past

Bryan Tyree Henry and Kristen Stewart Out actress Kristen Stewart says people who object to LGBTQ+ superheroes are living in the past — and they’re welcome to stay there. On ... Read more »

© Bang Showbiz Chrissy Teigen Chrissy Teigen takes the ashes of her late son with her on family trips. The 35-year-old model lost her son Jack 20 weeks into her ... Read more »

20 pregnant and postpartum women admitted to ICU with Covid since June, obstetrician says

Emergency use listing for Covaxin: WHO's technical advisory group to decide today

Are Alison Hammond and Dermot O'Leary replacing Phil and Holly?

Nykaa's sales value trebles to $199mn in Q1 on e-shift