Sebastian Vettel hopes that Max Verstappen has a better car than he did at Ferrari for the culmination of an epic 2021 season. Red Bull driver Verstappen leads Lewis Hamilton by just six points in the drivers’ standings, with six races of the campaign remaining.

The first of those takes place in Austin, Texas, this weekend, before further Grand Prix’s in Mexico, Brazil, Qatar, Saudi Arabia, and then the season finale in Abu Dhabi.

Despite Verstappen’s slender lead, pundits believe there were warning signals in the last two races, in Russia and Turkey, that Mercedes are starting to outpace Red Bull at a critical stage of the season.

Vettel won four consecutive titles with the team from 2010-2013, before the ‘Silver Arrows’ began their era of dominance, with Hamilton (six) and Nico Rosberg ensuring the team have won all seven drivers’ championships since.

In 2017 and 2018, it was Vettel, by then at Ferrari, who pushed Hamilton closest before tailing away in the latter part of the season, the German driver doesn’t want the same to happen to the Dutch prodigy.

JUST IN: Lewis Hamilton’s incredible LA pad with breathtaking scenery ahead of US GP 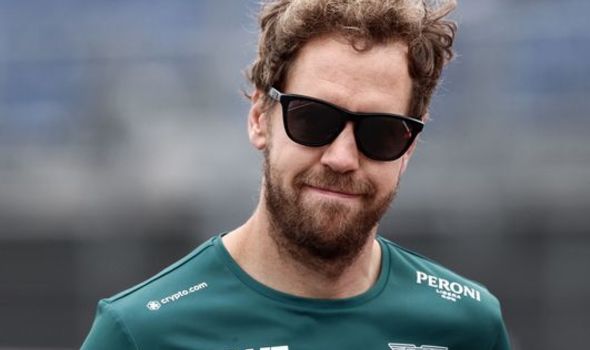 Speaking to reporters ahead of the race this weekend, the 34-year-old said “I hope that Max has a better car at the end, or better position to be in at the very end, because the fights that I was (in) with Lewis, unfortunately, we were not as competitive to really give him a hard time in the end.

“So I think it was quite clear and fairly easy for him to win the championship in the end.”

Verstappen, 24, and seven-time champion Hamilton, 36, have been embroiled in flash points this season, with the pair colliding on the track at both Silverstone and Monza.

However Vettel, now at Alfa Romeo, has enjoyed the duel and despite the controversies said he felt the battle had been ‘clean’ so far.

“I think rivalry is good for any sport,” he said.

“But I’m a huge fan of rivalry with respect. And I think we’re seeing a very clean fight so far.”

Vettel himself however, is unlikely to be close to Hamilton or Verstappen as the pair jostle for the title lead in Texas.

He’s set to start the US Grand Prix from the back of the grid due to a power unit change, and understandably, thinks he may be in for a “difficult” weekend. 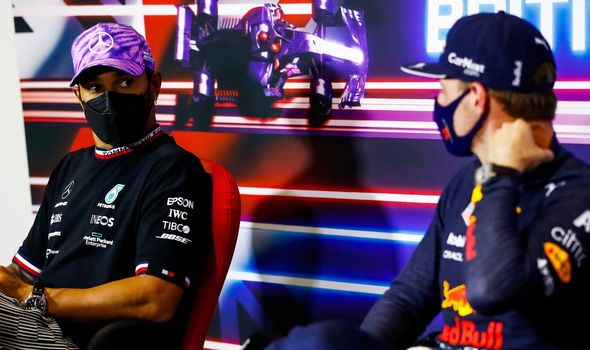 © GETTY Hamilton and Verstappen are in a title battle.

Earlier this month he triggered a contract extension which means he will stay with the team, alongside Lance Stroll, for the 2022 campaign but is yet to commit to a future in F1 beyond that.

The race in Austin is the first at the Circuit of the Americas since 2019, with last year’s event cancelled due to Covid-19.

Two years ago it was Valtteri Bottas who prevailed, although it’s Hamilton whose won five times in there in the past eight years.

It's snow bargain! World's most expensive Christmas jumper which took over six months to make and is encrusted with diamonds and gold goes on sale for £30,000

Luis Suarez claims Lionel Messi “suffers a lot” with the cold weather in France after having private chats with the Paris Saint-Germain superstar about how he is settling into his ... Read more »

'It was men against boys, they look like they've never played together' — Tom Shanklin's withering Dragons assessment

Former Wales and Lions star Tom Shanklin has launched a withering assessment of the Dragons after their latest defeat. Dean Ryan’s side have now lost six of their seven United ... Read more »

Manchester United number one David De Gea may not see out Ralf Rangnick’s tenure, according to former Manchester City winger Trevor Sinclair. The ex-England international has raised questions over the ... Read more »

‘Game changing' Covid antiviral pill to be rolled out ‘before Christmas'

An antiviral pill to treat Covid-19 could be rolled out to patients before Christmas in a bid to protect the most vulnerable. © The UK is the first country in ... Read more »

There has never been any doubt about Raheem Sterling’s quality as a footballer – he is one of the very best – but it did look increasingly like his time ... Read more »

47 brilliant movies that didn't receive an Oscar nomination, from American Psycho to Heat

47 brilliant movies that didn’t receive an Oscar nomination, from American Psycho to Heat It might sound obvious, but a film getting nominated for an Oscar doesn’t automatically make it ... Read more »

Another historic day for Ajaz Patel was not enough to prevent India from edging closer to a crushing second-test victory in Mumbai. Patel picked up four more wickets to go ... Read more »

Aston Villa host Leicester City at Villa Park today off the back of a spirited display against Premier League champions Manchester City on Wednesday night. Steven Gerrard’s side were beaten ... Read more »

© Provided by Football League World Lynden Gooch n It was a frustrating day for Sunderland on Saturday, as they were held to a 1-1 draw by Oxford United at ... Read more »

The UK Government’s proposals for an end to legal cases relating to Northern Ireland’s Troubles are offensive “morally, constitutionally and legally”, a prominent lawyer has said. Kevin Winters, whose legal ... Read more »

Halsey in no rush to make another album

Halsey felt so creatively fulfilled by her recent album that she thinks it will be “a while” before she works on another. © Provided by Cover Media Halsey The Without ... Read more »

Chelsea or Arsenal: Predicting who will win the Women's FA Cup Final at Wembley

YouTuber and comedian Stephen Tries on his jokes, career and literally being set on fire

From diss tracks, yearly roasts and teaching people how to be Stormzy, Stephen Lawson – better known as Stephen Tries – has been making his followers laugh for the past ... Read more »

There’s rarely such a thing as the perfect deal when it comes to transfers in sport; no matter the athlete, teams or fan bases involved, it seems inevitable someone along ... Read more »

© Provided by Football League World General view of fog before the match Ipswich Town midfielder Sam Morsy has admitted that the club’s players have not been good enough, following ... Read more »

© Provided by Football FanCast Premier League – Manchester City v Crystal Palace Patrick Vieira will once again be without one of his standout performers as Crystal Palace look to ... Read more »

Erik ten Hag has admitted that he is ‘ready’ for a new ‘challenge’ away from Ajax. Manchester United sacked Ole Gunnar Solskjaer last month and Ajax boss Ten Hag was ... Read more »

© Provided by Football FanCast Jules Kounde France With Ralf Rangnick now confirmed as Manchester United’s interim manager, there will certainly be attention on the upcoming transfer window after the ... Read more »

The latest, most personal picture from Paolo Sorrentino, The Hand of God is a film of two uneven halves. Set in 1980s Naples and focused on Sorrentino’s alter ego, teenager ... Read more »

Don't miss the pensions perk that could ease bills squeeze: Over a million people could boost income

Supermarkets may check out Boots: Chemist could be target for retailers

Bosses at Marshall Wace to get £316m: Hedge fund bosses to get payout after bumper trading during pandemic

LIVE: Manchester United vs Crystal Palace - New manager Ralf Rangnick takes charge of his first game as he looks to build on three-match unbeaten run with victory over Patrick Vieira's side