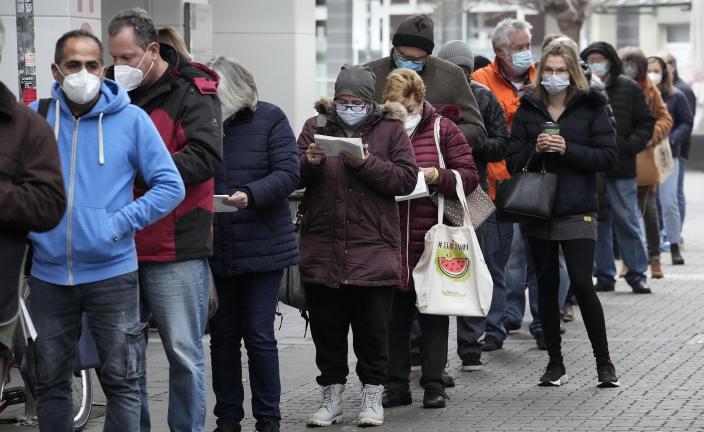 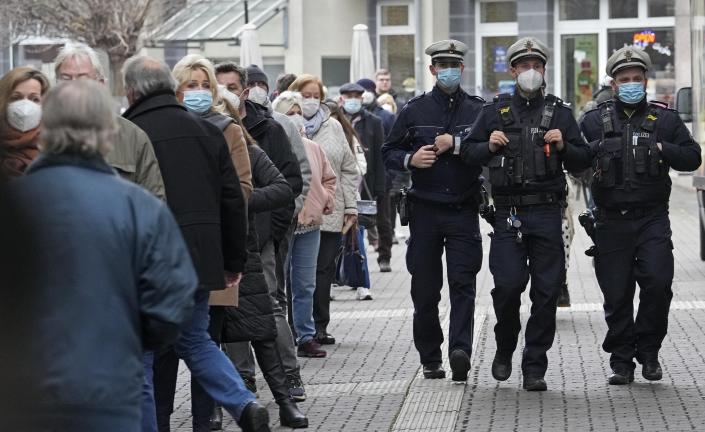 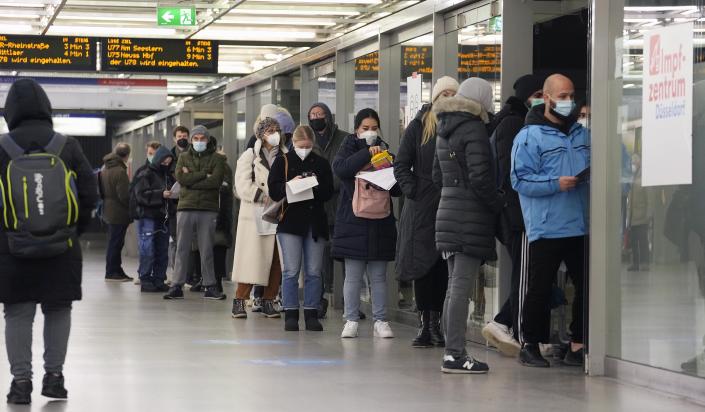 1 / 3Virus Outbreak GermanyPeople queue in front of a vaccination center to get vaccinated against the coronavirus in Duesseldorf, Germany, Monday, Dec. 6, 2021. (AP Photo/Martin Meissner)

BERLIN (AP) — A group representing Germany's main scientific organizations has accused the country's biggest-selling newspaper of contributing to public hostility against scientists during the coronavirus pandemic.

In a statement Monday, the Alliance of Scientific Organization criticized a recent report by the Bild tabloid for singling out three researchers who had called for tougher restrictions to reduce COVID-19 infections in Germany.

The paper published pictures of the three scientists Saturday with the headline “Trio of experts give us frustration for the holidays.” It came days after German federal and state officials agreed to tighten existing restrictions, particularly for unvaccinated people, amid a surge of new cases.

The alliance said making it seem like the three researchers personally were responsible for unpopular measures could “easily contribute to a climate of opinion that has elsewhere already led to scientists being subjected to or threatened with physical or psychological violence.”

It said fact-based reporting and debate would be preferable and more effective.

Publisher Axel Springer, which owns Bild, said it understood the criticism and took it seriously.

“Scientists deserve our respect,” the company said in a statement. “Criticism of scientists and their proposal must be possible, but it should always be done in an appropriate way,” it said, adding that this was true also for Bild.

Follow all AP stories on the pandemic at https://apnews.com/hub/coronavirus-pandemic.

China tells citizens to avoid mail from abroad and open packages with gloves, claiming that Omicron is spreading through foreign post

Households will be 'devastated' overnight by soaring energy bills

Prince Andrew has been accused of “victim blaming” by women’s rights groups and legal experts after demanding to see Virginia Roberts Giuffre’s mental health records and suggesting she has “false ... Read more »

'They killed a beautiful sportsman and his career': How the world reacted to Novak Djokovic's deportation

Australia has decided to 'let Covid rip.' Is that a good idea?

Waves rush over island country while tidal surges are felt by small Pacific neighbours plus New Zealand, Australia, US and Japan Tsunami waves caused by an undersea volcano have flooded ... Read more »

A sixth Conservative MP is calling for the prime minister to quit over the ever-growing list of alleged lockdown-breaking parties in Downing Street, as Boris Johnson is reportedly preparing to strike back ... Read more »

All-Star Kevin Durant has been forced out of Saturday's Brooklyn Nets game against the New Orleans Pelicans due to a left knee sprain. Durant is expected to undergo an MRI ... Read more »

The streak is over. The Cincinnati Bengals beat the Las Vegas Raiders 26-19 in Saturday's wild-card matchup, earning their first postseason victory since 1991 and ending an eight-game playoff losing ... Read more »

Photograph: Loren Elliott/Reuters Djokovic’s lawyers dispute that the Serbian tennis player is an anti-vaxxer as federal court hearing on his last-ditch bid to avoid deportation begins Get our free news ... Read more »

(Photo: Daniel Leal-Olivas/PA Wire) Article originally published 21/07/2016: due to a technical issue this article may have resurfaced for some readers, and the original publish date may not have been ... Read more »

Emma Raducan Australian Open – AP The Australian Open can get along perfectly well without Novak Djokovic, said the 20-time major champion Rafael Nadal, on a day when the world’s ... Read more »

Prince Harry has filed a claim for a judicial review over a Home Office decision to not to allow him to privately pay for police protection for himself and his ... Read more »

Carrie Johnson with her friend, Anna Pinder Carrie Johnson, the Prime Minister's wife, was photographed breaking Covid-19 social distancing rules days after the public was warned that it was “critical” ... Read more »

Jennifer Lewis died in July 2017 from the effects of malnutrition while she was an inpatient at the Bracton Hospital (Angela Lewis) “Unacceptable” failures by a mental health hospital to ... Read more »

Celine Dion delivered upsetting news to fans on Saturday when she shared a health update. The star – who was forced to postpone her Las Vegas residency in October due ... Read more »

Another day at the office means another seriously chic outfit for Amanda Holden! Putting a retro spin on her latest workwear look, the radio star headed to Global Studios in ... Read more »

Tonga hit by tsunami as Australia, New Zealand and US issue alerts after huge volcanic eruption

An undersea volcano has erupted in the Pacific island nation of Tonga, sending large waves which prompted tsunami advisories across the South Pacific and the US. People have been forced ... Read more »

Charles Spencer previously revealed the library inside Althorp House is his favourite part of the home, but we didn't realise it had a very sentimental corner – until now. SEE: ... Read more »

Vogue Williams showed off her blossoming baby bump on Friday as she soaked up the sun in the Maldives. MORE: Vogue Williams demands second proposal after 'uncomfortable' Spencer Matthews engagement ... Read more »

Killer, 18, jailed for fatally stabbing 16-year-old who tried to break up a fight

Rayon Pennycook was stabbed to death in the street as he attempted to break up a fight (SWNS) A teenager has been jailed for life for stabbing a 16-year-old to ... Read more »

File: A hazardous tsunami was generated in Tonga on Saturday (Getty Images) Tsunami waves measuring two feet in height were generated in American Samoa after volcanic activity in Tonga, a ... Read more »

This Morning fans make same plea after presenter shake up

This Morning made some changes to its presenting line-up ahead of Friday's edition of the show – and it sparked viewers to make a similar plea online. MORE: Alison Hammond ... Read more »

Djokovic heading back to detention before crunch Australia deportation hearing

Novak Djokovic's Australian Open fate is set to be determined in a fresh hearing on Sunday – with the defending champion back into detention before that takes place. In a ... Read more »

David Beckham has delighted his fans by sharing new pictures with his daughter Harper during the school run. The former footballer joked that his ten-year-old girl looks almost identical to ... Read more »

Why Did the Queen Take So Long to Call Time on Prince Andrew?

John Thys/Getty Prince Andrew’s excommunication from royal life, announced this week by the queen, was a dramatic moment, for sure. But, as he prepares to continue fighting or end or ... Read more »

The Golden State Warriors showed off their newfound depth and flexed their muscle with a 138-96 rout over the Eastern Conference-leading Chicago Bulls on Friday. Three Warriors scored more points ... Read more »

‘I'm so afraid': Child refugees forced to share rooms with adults after being wrongly deemed over 18