A group of maskless Chicago high schoolers stormed out of school Monday after being told to mask up for class, leave the building or isolate in the gymThe students exited the school in protest and were met with  applause and positive remarks including: 'Good job, way to stand up for yourselves'The walkout came after an Illinois judge issued a temporary restraining order against the governor's statewide school mask mandate Some states, including Delaware and New Jersey, have made the shift to end statewide school mask mandates in wake of a decline in COVID positivity ratesDespite the moves of neighboring states, New York Governor Kathy Hochul plans to expand the school mask mandate later this month

Frustrated Chicago-area students walked out of school Monday after being told they were required to wear masks to attend class, despite an Illinois judge having issued a temporary restraining order against the governor’s COVID-19 era mask mandate.

The maskless Vernon Hills High School students were denied entry into classrooms and escorted into the gymnasium, where they were instructed to either mask up, leave school and have a parent report the absence, or work on classwork isolated in the gym.

Video of the protest shows a throng of children exiting the gym before walking out of the school’s front doors where they are met with applause and positive remarks including: ‘Good job, way to stand up for yourselves.’

The students, who were given a mental health day, are angered by the treatment, with one telling The Kerr Report: ‘I’ve been denied access to education.’

The walkout comes as some states, including Delaware and New Jersey, have made the shift to end statewide school mask mandates.

Despite the moves of neighboring states, New York Governor Kathy Hochul is planning to expand the school mask mandate ahead of its scheduled expiration later this month. 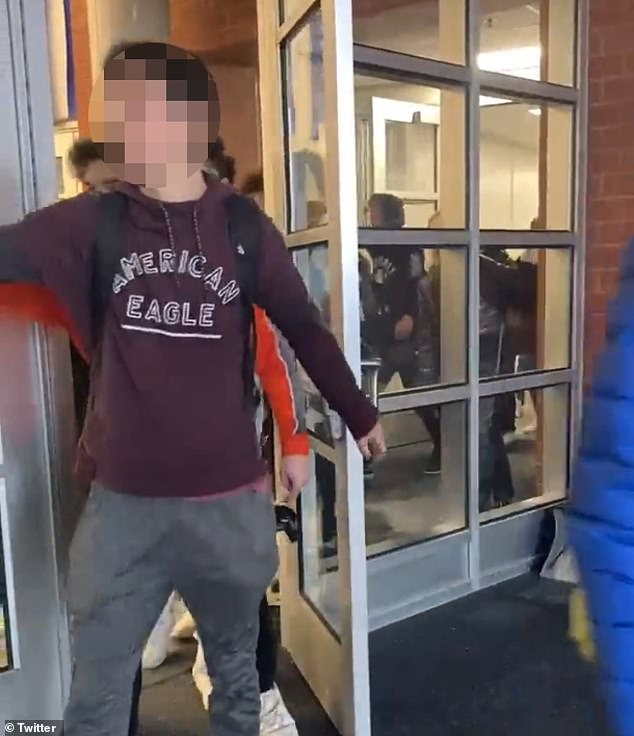 New York Department of Health spokeswoman Jill Montag confirmed to the Albany Times Union Monday that the mask mandate, set to expire on February 21, is ‘expected to be renewed’.

The initial regulation was issued under a 90-day window. The health department official did not indicate whether the renewal would also be continued for 90 days.

‘The critical issue with mandatory masking in schools at this moment is the urgent need for school leaders and parents to know the plan moving forward with concrete assurances from the state,’ Harrington and Dedrick penned in the letter, which was made public Monday.

‘School leaders, students, teachers, and caregivers have been put through a whirlwind of uncertainty when it comes to masking.’

The council argued that parents are concerned mask mandates will ‘continue in perpetuity’ because state leadership has failed to ‘provide reasonable, understandable, and achievable metrics based on recommendations from medical professionals for when masking rules will eventually be changed.’

Meanwhile, the statewide order forcing businesses without vaccination mandates to mandate masks wearing for workers, customers and visitors is set to expire on Thursday and will not be extended, according to the newspaper.