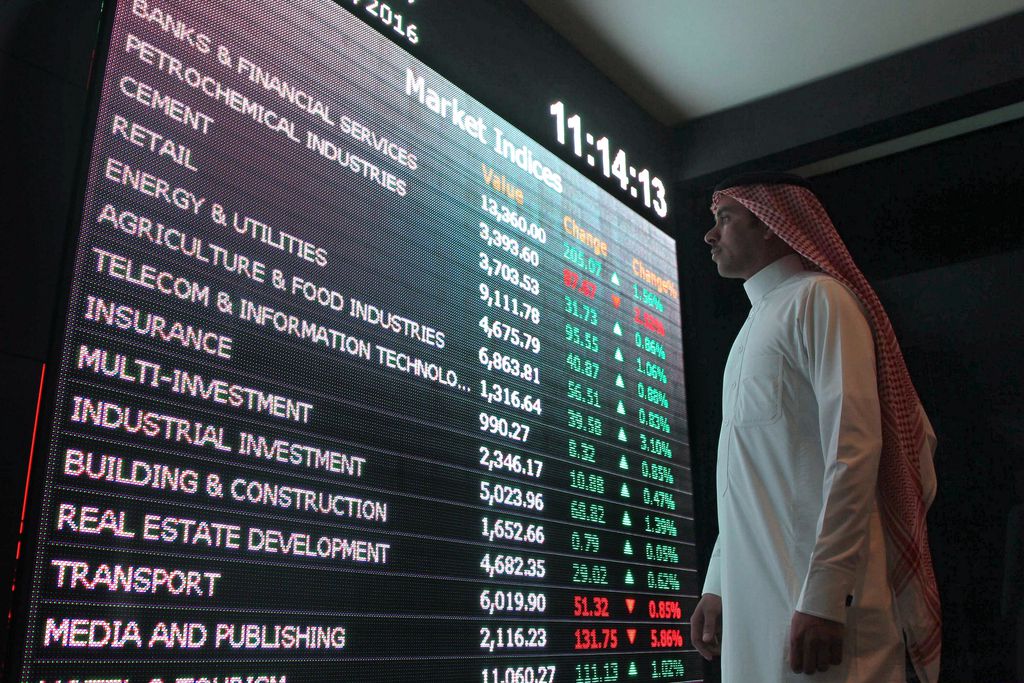 Shares of Saudi Tadawul Group, the owner and operator of the kingdom’s stock exchange, surged as high as 13 per cent above the listing price as it started trading on Wednesday.

“The group’s listing supports the commitment to best practice corporate governance within the business and the utilisation of the subsidiaries’ integrated and scalable business model, to be an attractive investment destination for all investors,” said Khalid Al Hussan, chief executive of Saudi Tadawul Group.

The kingdom’s Public Investment Fund owns a stake in Saudi Tadawul Group, which has four subsidiaries. These include: the Saudi Exchange, a dedicated arm running the kingdom’s equity market previously known as the Saudi Stock Exchange Company; the Securities Clearing Centre Company (known as Muqassa); the Securities Depository Centre Company (Edaa); and a new subsidiary focused on applied technology services known as Wamid.

Tadawul raised 3.78 billion riyals through an initial public offering (IPO) that was 121 times oversubscribed. It sold 36 million shares representing 30 per cent of its issued share capital to institutional and individual investors.

“The listing marks a major milestone in the company’s growth story and is the natural next step as we emerge as a Saudi powerhouse with a global mindset that is able to leverage scale, innovation and execution capabilities to drive long-term value for all our stakeholders,” said Sarah Al Suhaimi, chairwoman of the company.

Tadawul is the only third regional stock exchange to publicly trade after the Dubai Financial Market and Boursa Kuwait.

Gold Down Thanks to Rising Dollar, U.S. Treasury Yields

Dhanush-Aishwarya divorce: Rajinikanth's daughter called herself a 'proud wife' in her last post for the actor - check deets

Priyanka Chopra remembers wearing mangalsutra for first time, reveals she wondered 'is it too patriarchal?'

Psych evaluation for teacher who committed indecent acts on student, 15, in 2011

Editors’ Note: This story tackles sensitive topic that young and some readers may find disturbing. MSN strongly advises to read with caution and proper guidance. SINGAPORE — A teacher at ... Read more »

As if it couldn’t get worse for the Arizona Cardinals on Monday night, safety Budda Baker was stretchered off the field after taking a shoulder to the head from Rams ... Read more »

Lara Dutta reveals Salman Khan wakes up only post 12 am, calls her at midnight

Dollar Down, Yen Reacts to Bank of Japan Policy Decision

© Reuters Dollar Down, Yen Reacts to Bank of Japan Policy Decision By Gina Lee Investing.com – The dollar was down on Tuesday morning in Asia, while the latest policy ... Read more »

© Provided by The Times of India NEW DELHI: The Centre on Monday informed the Supreme Court that as coronavirus remains active in a dead infected person for up to ... Read more »

Memories of the 2010 World Cup in South Africa are all played out to the annoying high-pitched drone of the vuvuzela. Similarly, when the 2021-22 Premier League title race is ... Read more »

© Provided by BollywoodLife.com Krushna Abhishek and Govinda have been in the news for the longest time thanks to their ongoing family feud. Govinda’s wife Sunita Ahuja and Krushna’s wife ... Read more »

© Provided by Pinkvilla Jasmin Bhasin always comes into our mind when we think about any popular celebrities in the telly industry. She is a powerhouse of talent and has ... Read more »

Drag Race UK vs The World: Meet the contestants competing to be named Queen of the World

The cast of RuPaul’s Drag Race UK vs The World has been announced. The series, which begins in February, will see queens from Drag Race franchises around the world compete ... Read more »

Bigg Boss 15: Karan Kundrra's father welcomes Tejasswi in family, says ‘She is in the heart of the family now'

© Provided by Pinkvilla The upcoming episode of the reality show Bigg Boss 15 will be a very emotional one. The contestants will be getting a chance to talk to ... Read more »

No prescription is required to get tested if you are showing any symptoms of Corona: Satyendar Jain

© Provided by The Statesman No prescription is required to get tested if you are showing any symptoms of Corona: Satyendar Jain Delhi health minister Satyendar Jain said that no ... Read more »

© Provided by Pinkvilla Brian Cox has been the talk of the town since his exceptional performance in the popular series, Succession. He recently launched his new memoir called Putting ... Read more »

The mission to repair the undersea communications cable that connects Tonga with the rest of the world could take up to a fortnight, the cable operator has warned, due to ... Read more »

Betty White's assistant shares one of her last photos

Betty White would have celebrated her 100th birthday on Monday and her assistant commemorated the day by sharing one of the final photos taken of the beloved late actress. © ... Read more »

© Provided by Preview.ph It’s been a rollercoaster month for Song Ji Ah, the breakout star of the reality dating show Single’s Inferno. From catapulting to social media fame thanks ... Read more »

© Provided by Spot.ph (SPOT.ph) Pokémon fans, you may have heard that your favorited animated series is turning 25 this year. While that might make some of you feel a ... Read more »

New Zealand is sending aid to disaster-struck Tonga, but ash on the capital’s main airport runway is preventing relief planes from landing. It will also take days before military ships ... Read more »

© Provided by Preview.ph The name Heart Evangelista was not built overnight. After working in showbiz for over a decade, becoming a businesswoman in her own right, and finding international ... Read more »

© Provided by DW An eruption occurs at the underwater volcano Hunga Tonga-Hunga Ha’apai off Tonga A closed airport and lack of communication continued to hinder international relief measures on ... Read more »

London MPs are “appalled” at slashes to South Western Railway train services claiming cuts are causing “anxiety” for local commuters. The increase in cases of the Omicron Covid variant has ... Read more »

NZ and Australia sent surveillance flights to Tonga, the only way to figure out what happened after a tsunami cut off internet and phone access

NZ and Australia sent surveillance flights to Tonga, the only way to figure out what happened after a tsunami cut off internet and phone access A tsunami hit the Polynesian ... Read more »

Business secretary Kwasi Kwarteng will hold fresh talks with energy companies this week as the government narrows its options for insulating consumers from a forecast 50% increase in bills. that ... Read more »

In analogue times, leaving a prime time radio slot might have seen a DJ move from, say, Fab FM, to the graveyard shift on Radio Quiet. © Shaun Keaveny For ... Read more »

Magic loving Londoners are being invited to dust off their wands and don their robes for a series of special performances from the team behind one of London’s most awarded ... Read more »

© Provided by Times Live An ANC MP has taken aim at President Cyril Ramaphosa, wanting him to answer to allegations that state funds were used for party campaigns. Mkhuleko ... Read more »

© Leslie Pableo Rishi Kapoor, co-chief executive of Investcorp, says the company is ‘doubling down on our efforts, particularly with regard to financing the decarbonisation journey’. Leslie Pableo / The ... Read more »

At least 351 cops down with Covid in Ahmedabad, Gujarat DGP in home isolation

Brock Nelson was making a pregame drink on Monday night when Barry Trotz popped into the room. “Hey, what’s up?” Nelson recalled him saying. “Everybody ready to go?” It wasn’t ... Read more »

Is Omicron on Way Out? Mumbai Cases Ebb, Delhi Sees Decline in Silver Lining for Battle Against Covid

Soha Ali Khan says she thought Emraan Hashmi ‘wouldn't be such a good actor': ‘I had an impression of him'

In a FIRST in 75 years, Republic Day parade to start 30 minutes late - here's why

N-Dubz: where are Dappy, Tulisa and Fazer now?

London studio flat where bedroom is MATTRESS squeezed into a CUPBOARD

Sara pushes senatorial bid of Gibo, 'the one that got away'