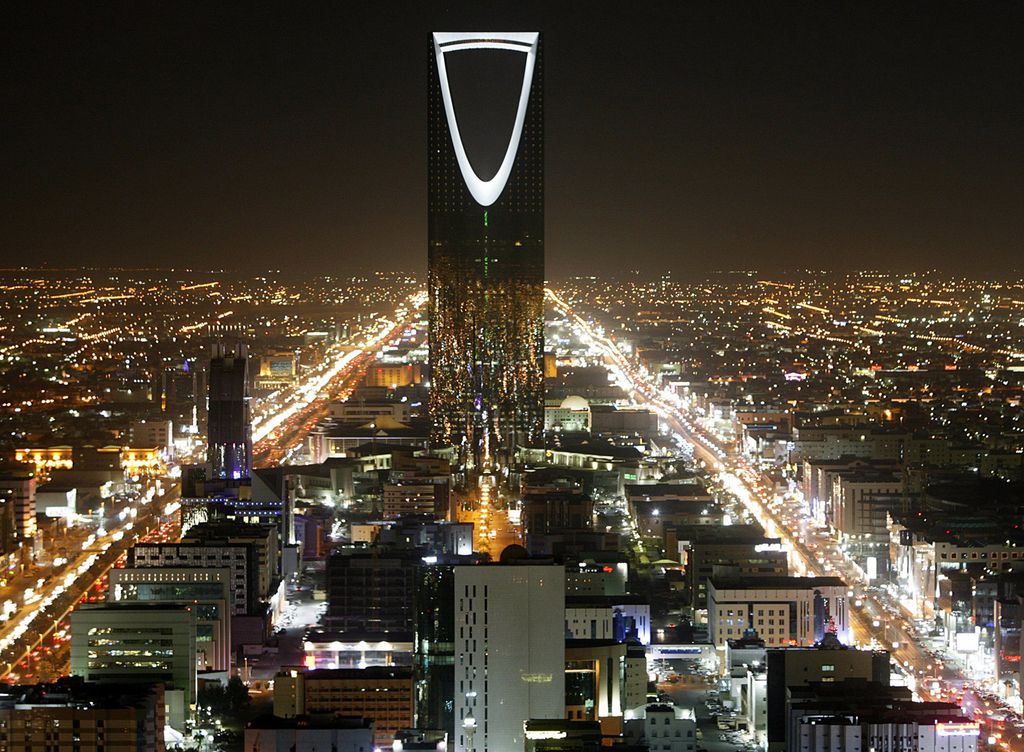 © Provided by The National The kingdom also plans to more than double its target of reducing annual carbon emissions to 278 million tonnes by 2030. Ali Jarekji / Reuters

The kingdom also plans to more than double its target of reducing annual carbon emissions to 278 million tonnes by 2030, he said in recorded comments during the hybrid event, up from a previous target of 130 million tonnes.

“We announce today the kingdom is aiming to reach net zero by 2060 through a circular carbon economy approach, in a way that’s compatible with the kingdom’s development plans and enables its economy to diversify… while maintaining the kingdom’s leading role in strengthening security and stability of global oil markets,” he said at the opening of the climate conference.

The kingdom’s green initiatives represent investments of more than 700 billion Saudi riyals that will create major opportunities for the private sector, create more jobs and develop a green economy.

“The Saudi Green Initiative will provide huge investment opportunities for the private sector, quality job opportunities for the next generation of leaders in the kingdom and enhanced international relationships that will have a positive impact on the region and the world,” the Crown Prince said.

The announcement at the SGI comes ahead of the crucial UN Climate Change Conference of the Parties, or Cop26, in Glasgow to be held from October 31 to November 12. The gathering of world leaders aims to agree on steeper emissions cuts to address global warming amid rising threats from climate change.

Saudi Arabia became the second Gulf country after the UAE to unveil a net-zero emissions target.

The kingdom also committed to join the Global Methane Pledge to contribute to cutting global methane emissions by 30 per cent from 2020 levels by 2030.

The plans are “not contingent on any type of grants, finances or loans. It’s actually more dependent on the evolution of technologies and collaborative work on how we develop and mobilise technologies”, the energy minister said.

The kingdom is “waiting anxiously” at Cop26 on clarity around Article 6 whereby it can domesticate carbon credits and off-set schemes to exchange credits among local industries and entities, he said.

Saudi Arabia had a “successful” energy efficiency programme for over a decade and so far reduced 48 million tonnes of annual CO2 as a result and plans to further reduce more than 90 million tonnes annually with a focus on three sectors of industry, transportation and building that together constitute 90 per cent of its energy use, he added.

“If any one can pull this off, it is the weight, depth and strength of the kingdom that will help enable the world to seriously and in a progressive manner address the threats of climate change in a real, true, practical manner,” he said during a discussion at the SGI.

Dr Al Jaber called it a “paradigm shift” on how business is conducted and a “step-change” for climate dialogue.

“This is just another example of how this region can help address global challenges,” he said.

“It is simply an open invitation for the world to partner with the UAE and now with Saudi Arabia to help address gaps and build bridges and develop the necessary and seriously required solutions to help progress the discussions for climate action,” he said.

“For an oil-producing country, this is a game-changing, history-changing decision,” she said.

Prince Abdulaziz said that the kingdom, a signatory of the 2015 Paris Agreement, has already sent its nationally determined contributions (NDCs) to the UNFCCC. These are goals for individual states under global efforts to prevent average global temperatures from rising beyond 1.5 degrees Celsius above pre-industrial levels.

The SGI will be a platform to launch more than 60 environmental initiatives this week and will be held every year as part of efforts to hold the kingdom accountable to its goals, he said.

During the climate conference, Saudi Arabia expects to sign agreements related to renewables and gas on Sunday with other oil-producers in the Middle East such as Iraq, Prince Abdulaziz said.

Pokemon Brilliant Diamond and Shining Pearl: How to get Spiritomb

How to get the Deino Hat avatar item in Pokémon Go

Tasha Kheiriddin: Another ‘virtual' hybrid Parliament could be a dangerous thing in government hands

It is still very rare for fully vaccinated people to get the coronavirus, but those who have weakened immune systems become infected more often and get more ill, according to ... Read more »

© NBC the-office-steve-carell.jpg Kevin Malone has always been a fan favorite of The Office thanks to his loveable and hilarious personality. And now it seems the unaired finale of the ... Read more »

© Provided by Pocket-lint Hulu Watch Party photo 3 (Pocket-lint) – Hulu offers a Watch Party feature that allows all subscribers to simultaneously watch a show or movie while in ... Read more »

Why Leylah Fernandez Is A Doris Anderson Award Recipient

Too tiny was the verdict of Quebec’s provincial tennis association, when it cut Leylah Annie Fernandez a few years ago from its development program. (The association also took exception to ... Read more »

© ET Dr. Oz is running for Senate. The TV personality and surgeon announced his candidacy for a Pennsylvania Senate seat in an op-ed titled “Why I’m Running to be ... Read more »

How to Know if It's Been Too Long Since You've Pooped

People often wonder how long it’s OK to go without pooping. We checked in with Sameer Islam, MD, a Texas-based gastroenterologist who specializes in the diagnosis and treatment of diseases ... Read more »

'And Just Like That' Trailer: Carrie, Miranda and Charlotte Embark on New Chapters

© HBO Max Carrie Bradshaw and her friends are in a new season of life in the latest trailer for HBO Max’s Sex and the City reboot, And Just Like That. ... Read more »

Ottawa to require test, quarantine from all non-U.S. travellers in wake of Omicron

The federal government will introduce a series of new restrictions at Canada’s borders in response to the Omicron variant, including requiring that all air travellers coming into Canada from outside ... Read more »

Why Dr. Vivian Stamatopoulos Is A Doris Anderson Award Recipient

© Provided by Chatelaine A woman with long hair in black and white wearing a black blazer. (Photo: Erik Putz) Dr. Vivian Stamatopoulos has been thinking about long-term care for ... Read more »

Why Sabrina Craig Is A Doris Anderson Award Recipient

© Provided by Chatelaine (Photo: Courtesy of Sabrina Craig) More than 58 million doses of COVID-19 vaccine were administered in Canada by October. It’s no stretch to say that thousands ... Read more »

© Provided by BusinessWorld THE PHILIPPINE Economic Zone Authority (PEZA) said it is pinning its hopes on expanding the pool of South Korean investors to add momentum to the reopening ... Read more »

© Cavan Images/Getty Images Each product has been independently selected by our editorial team. We may receive commissions from some links to products on this page. Promotions are subject to ... Read more »

Why Sandra Oh Is A Doris Anderson Award Recipient

When The Chair debuted on Netflix in August, it quickly became the top-watched show in Canada and the subject of much online discussion. The series follows Ji-Yoon Kim (played by ... Read more »

‘How does he still have a job?' CNN staff sounds off as Chris Cuomo defies ban, talks bro on SiriusXM show

Maybe he’s embracing the only job he expects to keep. Chris Cuomo on Tuesday used his SiriusXM show to speak about his brother’s resignation as governor of New York despite ... Read more »

Why Dr. Nadia Chaudhri Is A Doris Anderson Award Recipient

© Provided by Chatelaine A woman stands with her arms crossed in a black blazer and short hair with a streak of white. (Photo: Lisa Graves/Concordia University) I have a ... Read more »

Why Melissa Lantsman Is A Doris Anderson Award Recipient

© Provided by Chatelaine Melissa Lantsman standing, wearing a red and white coat and a white shirt with her hair tied into a bun. (Photograph: Carmen Cheung) In September’s federal ... Read more »

Adam Woodyatt opened up to fellow campmate Frankie Bridge about his departure from EastEnders on the latest episode of I’m a Celebrity, which was broadcast tonight. The actor, best known ... Read more »

Ant and Dec have shown the behind the scenes damage done to the I’m A Celebrity…Get Me Out of Here! production base caused by Storm Arwen, as they returned to ... Read more »

© Image: Giulio Zompetti Apple device collector Giulio Zompetti has photographed a prototype 29W Apple charging brick, and it may be one of the rare instances where the product-in-progress may ... Read more »

© Provided by Associated Press Barriers to separate activists are set up outside of the Supreme Court in Washington, Tuesday, Nov. 30, 2021, ahead of arguments on abortion at the ... Read more »

The Associated PressOpposition candidate for the governorship of the state of Barinas Adolfo Superlano, speaks to the press in Caracas, Venezuela, Tuesday, Nov 30, 2021. Venezuela’s Supreme Court of Justice ... Read more »

LIVE – Updated at 22:13 Follow the day’s news live.   22:13 South Australia has opened its booster program to anyone who is eligible – which means anyone who had ... Read more »

© AP Photo/Kiichiro Sato, File. Recently, TikTok has been our primary source of everything cool — heck, it’s how we found out that center parts are coming back. From life ... Read more »

© Provided by Hello! shania-twain-standard Shania Twain is positively bubbling with excitement and so are we as she counts the days down to a major career comeback happening soon. MORE: Shania ... Read more »

‘It is a terrifying time': Legal right to abortion in US faces direct challenge at Supreme Court

The landmark US Supreme Court decision that legalised abortion across America almost five decades ago could be overturned following the latest abortion case before the nation’s high court, campaigners warned. ... Read more »

ITV I'm a Celebrity: Inside Ant and Dec's 30-year friendship from rocky start to being neighbours for years

Ant McPartlin and Declan Donnelly have established themselves as one of the most iconic TV duos to grace our screens. The pair have come a long way since their days ... Read more »

© Provided by The Times of India BENGALURU: Just a month after a Karnataka legislative committee ordered a survey of churches in Karnataka, which drew opposition from the Christian community, ... Read more »

© Provided by The Times of India THIRUVANANTHAPURAM: Taking a tough stand against those still reluctant to take Covid vaccines, the Kerala government on Tuesday decided not to provide free ... Read more »

© Provided by The Indian Express The Noida Authority has filed a status report in the Supreme Court on the demolition of the Supertech twin towers, even as the deadline ... Read more »

Canada’s national women’s soccer team went to the Tokyo Olympics hungry for a gold medal win, and served one up on a platter—ultimately defeating Sweden in a riveting 3 to ... Read more »

© Provided by The Times of India MUMBAI: There was dereliction of duty by the three policemen escorting dismissed assistant police inspector Sachin Waze, who had a meeting with IPS ... Read more »

© Provided by The Indian Express A 40-year-old was stabbed in central Delhi’s Chandni Mahal area, allegedly for refusing to buy a ticket to a Salman Khan movie for the ... Read more »

© Provided by The Times of India NEW DELHI: After reports of desecration of the sanctity of the Kartarpur gurdwara by a Pakistani model and a clothing brand, India on ... Read more »

NewsAlert: All travellers arriving by air, except from U.S., must now test at airport

Snow to give way to rain midweek in southern Ontario

Omicron and travel: What new restrictions mean for refunds and insurance

Omicron variant not yet detected in Saskatchewan; 40 people told to test, isolate

No immediate plans to shut border with Canada over omicron variant, U.S. says

India to have 500 mn 5G subscriptions, average traffic per smartphone to touch 50 GB/month by 2027-end: Ericsson

The BBC allows the Crown to film Martin Bashir interview

And Just Like That... Sex And The City Spin-Off Drops A Revealing Trailer