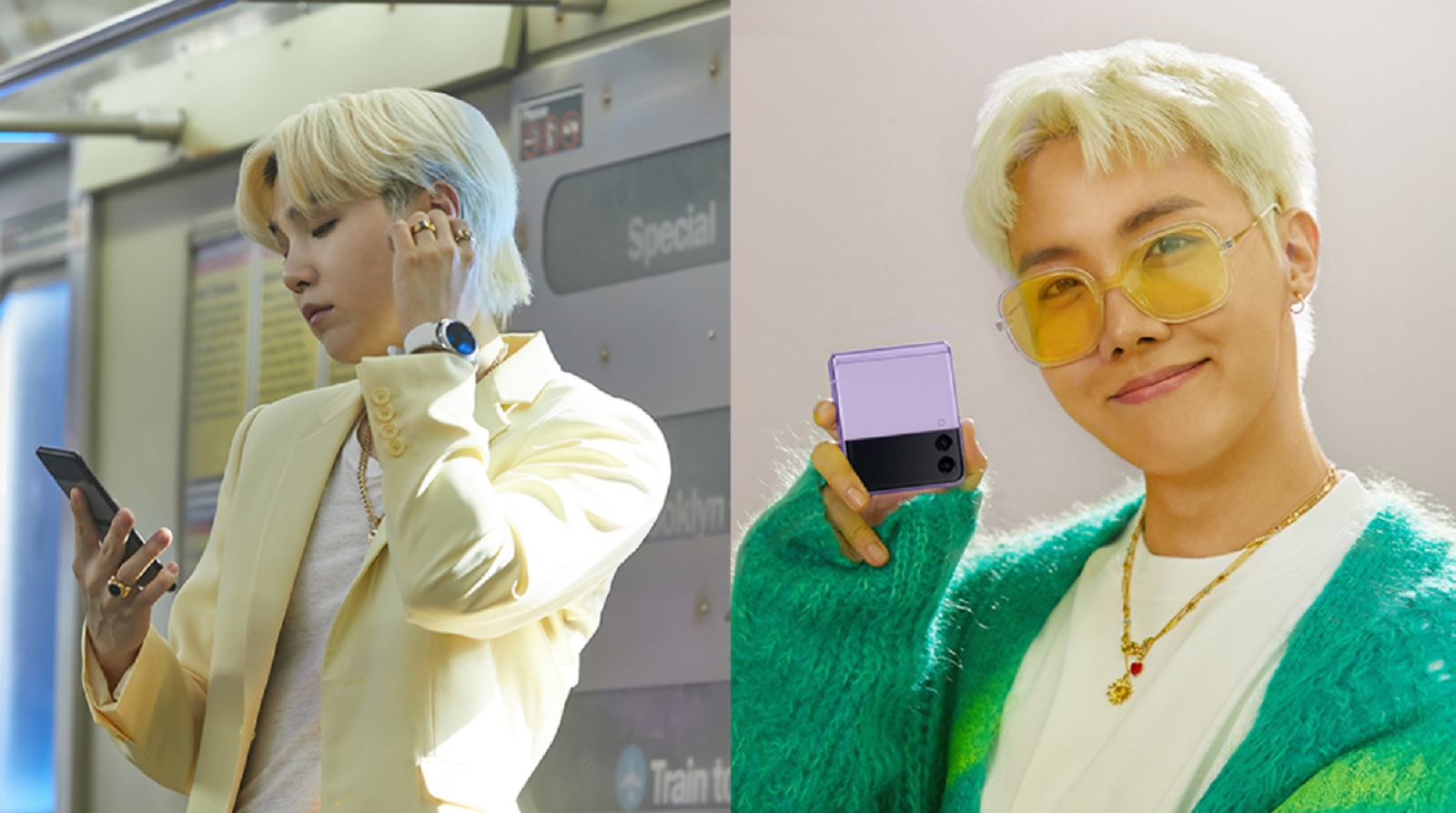 In what may be the most blatant tease ever, an official Samsung tweet asked if we’d forgotten the Samsung Galaxy Z Flip 3 (we loved it) and tagged K-pop megagroup BTS, as well as including the hashtag #GalaxyxBTS.

Yeah, we think they might collaborate on a phone.

The tweet seems pretty self-explanatory, going so far as to display images of the BTS members, some even holding the Samsung Galaxy Z Flip 3, and pointing to the official site for the next Samsung Unpacked event, which the company just announced will be happening on October 20.

You haven’t forgotten about the #GalaxyZFlip3 yet, have you? We still need to talk. #GalaxyxBTS @BTS_twt Learn more: https://t.co/U3NHdnHOyg pic.twitter.com/rqPg5jF4mrOctober 13, 2021

If you recall, these images seem to be from BTS’ appearance during the last Samsung Unpacked in August which saw reveals of the Z Flip 3 and the Samsung Galaxy Z Fold 3. That in itself felt like a hint that a collaboration between the globally famous group and the phonemaker might be happening, and this feels like all but confirmation.

You got BTS in my Samsung…again

What would a Samsung Galaxy Z Flip 3 BTS Edition look like? We haven’t the foggiest idea, as the images of the BTS members in the tweet don’t show any special versions of the Z Flip 3 – just one of the lilac colors you can buy today.

It’s not the first collaboration between the megagroup and the phonemaker – the Samsung Galaxy S20 Plus had its own BTS edition launch in July 2020, which came in a vibrant violet hue with blue-toned edges, as well as BTS-themed software customization. There didn’t seem to be any branding…except for a telltale purple heart on the camera block for true fans to spot.

Presumably, the Z Flip 3 BTS Edition (or whatever it’s called) could have a similar coloring and software package, as well as a logo somewhere in the design, but that’s all speculation at this point. It’s pretty obvious that we’ll see the device revealed at Samsung Unpacked on October 20, so we (and BTS fans eager for their next phones) will just have to wait for the event to see it shown off.

Insane tablet deal: New HSN customers can get the Amazon Fire HD 8 for just $40 (save $50)

COVID: how worried should we be about the new AY.4.2 lineage of the coronavirus?

3G is going away. Here's how to prepare: Talking Tech podcast

WhatsApp may verify your documents to use Payments

Earlier this year, Tesla CEO Elon Musk described his company’s in-development Cybertruck as a “special project” near and dear to his heart – and thanks to some brand new footage ... Read more »

Landscape design is usually back breaking work, involving a spade, and most likely a wheelbarrow. But why not forgo all of this and start your work from the comfort of ... Read more »

Big data has been a favorite business buzzwords for many years and while the popularity of the term skyrocketed, some were already tired of it by 2014, like Deloitte who ... Read more »

Ethereum's upgrade is finally coming — will it overtake Bitcoin?

The world’s second most valuable cryptocurrency, ether, has been touching all-time highs in price ahead of a major upgrade of its underlying platform, ethereum. Ether is currently worth in aggregate ... Read more »

The best mobile payment apps offer a simple way to make and send payments using your smartphone. Mobile apps providing contactless payments have become common since the introduction of Near ... Read more »

Photo credit: Konami via eFootball channel / YouTube screenshot This year marked a massive shift in Konami’s football simulation franchise, but the developer has yet to regain the trust of ... Read more »

One-minute review Shark has become a well-known brand in the floorcare market, and offers an array of models from uprights to cylinders, corded, cordless, and even handheld options – no ... Read more »

JioPhone Next key specs and features confirmed: All you need to know

Reliance Jio has released a video detailing its vision and the joint effort with Google and Qualcomm it invested in the making of the JioPhone Next. The short film also confirmed the features and key ... Read more »

Fortnite skins October 2021: All the skins coming to Fortnite and how to get them

October 2021 is here and that means Fortnite is getting spooky with a whole host of new Halloween-inspired skins for players to wear in-game. We know it’s hard to keep ... Read more »

Intel’s Alder Lake processors for laptops are expected to arrive in Q1 of 2022, following the launch of 12th-gen desktop chips which is purportedly imminent, but when these mobile CPUs ... Read more »

Scientists find one of the youngest planets ever

(University of Hawaii) Scientists have found one of the youngest planets ever discovered, having only been formed a few million years ago. The planet, 2M0437b, is several times larger than ... Read more »

Will Dune Part 2 happen, based on the first film's box office?

After what has felt like a lengthy wait, Dune has finally arrived in US theaters. And, based on its box office performance, it seems that the delay was worth it. ... Read more »

‘Valheim' update: Mistlands is the ‘next big biome update,' but it may not launch anytime soon

We may receive commission from purchases made via links on this page. Pricing and availability are subject to change. Pick up an Ecovacs Deebot on mega-sale! (Photo: Amazon) If you’ve ... Read more »

‘Halo Infinite' gameplay: When and where to watch the new campaign overview

Photo credit: HALO channel / YouTube screenshot Video game fans have seen enough teasers and overview trailers for the “Halo Infinite” multiplayer, so it is about time that 343 Industries ... Read more »

Millions of Microsoft Teams users are in for a nasty surprise

Microsoft has revealed it will soon revoke support for versions of collaboration platform Teams running on older Android builds. In a post to the Microsoft 365 Admin Center, the company ... Read more »

Participants hold a large EU flag as they take part in a pro-EU demonstration following a ruling of the Constitutional Court against the primacy of EU law in Poland, in ... Read more »

Redmi has announced to launch its Note 11 series in home country China on October 28. The series will likely consist of Redmi Note 11, Redmi Note 11 Pro and ... Read more »

So far, Eternals has the worst MCU Rotten Tomatoes review average since Thor 2

Marvel’s Eternals hasn’t drawn the same level of critical enthusiasm we usually see reserved for the Marvel movies so far. At the time of writing, after 41 reviews – meaning ... Read more »

Hybrid work isn't perfect, but SCIENCE can help us improve it

COVID-19 has changed the way we work. Even before the pandemic, the U.S. workforce increasingly relied on like videoconferencing and Slack. The global crisis accelerated the adoption of these work ... Read more »

How to watch the Halo Infinite campaign overview

Avira antivirus software review: Can it offer protection across all your devices?

Real time protection that runs in the background –blocking of known malware websites and a cloud-based AI agent that stops emerging threats (The Independent) German company Avira is owned by ... Read more »

Despite some cool product drops, last week’s Apple Event was really about the notch. If you’ve been living under a rock (oh, how I envy you), Apple announced its revamped ... Read more »

Quick - these Sennheiser headphones have dropped to their lowest ever price

If you’re looking for a pair of noise-cancelling headphones ahead of Black Friday, check out these fantastic Sennheiser headphones deals on the Momentum 3 Wireless and PXC 550-II Wireless. Costing ... Read more »

Lewis Hamilton speaks to the media after the US Grand Prix (Getty) Lewis Hamilton conceded Red Bull were “just quicker” at the United States Grand Prix after he finished 1.333 ... Read more »

Exclusive: Scam calls from foreign countries to be blocked under landmark plans

Scam illustration Foreign fraudsters will be stopped from making hundreds of millions of scam phone calls under landmark plans to protect the British public. Major phone networks have agreed to ... Read more »

Windows XP turns 20: Why it's time to say goodbye

JioPhone Next video shares details of vision in ties with Google, Qualcomm

Reliance has confirmed that the JioPhone Next, which was developed in partnership with Google, would be arriving in India next week on Diwali. Ahead of the launch, Jio has released ... Read more »

Hyundai Motor chief vows to cooperate on EVs with Indonesia

Phone companies will automatically block almost all internet calls coming from abroad, under plans to combat foreign fraud, Ofcom has said. All international calls found to be falsely using a ... Read more »

The agency’s officials were testifying at a House Science, Space, and Technology subcommittee hearing on Wednesday – and called for new weapons to help the US reach Mars before powers ... Read more »

iPhone users, researchers have a 'Facebook warning' for you

British scientists ‘frozen out' of EU research due to Brexit row, MPs warn

Twitter downvote feature may come to web as well

macOS Monterey rolling out on October 25: Here are the things you should keep in mind before updating

Facebook papers: What we know about how misinformation and extremism spread from whistleblower