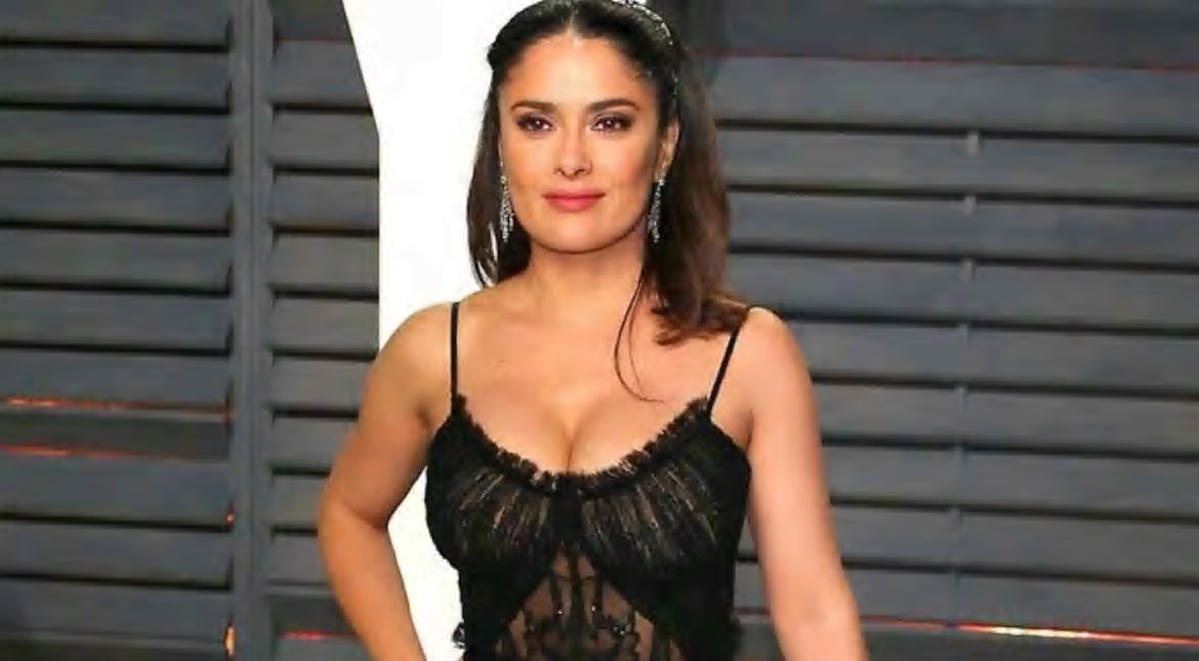 With the release date for Marvel’s Eternals coming closer, actress Salma Hayek revealed key details about her exciting role in the superhero film.

Portraying the role of Ajak, Salma Hayek revealed that her character will take a complex look at motherhood. Ajak is usually the male leader of Eternals in the comics so fans are genuinely curious to know how this role for Salma pans out in the multiverse film. Watch Eternals trailer here.

In a recent interview with TotalFilm, Salma Hayek revealed that her version of Ajak “can’t have kids”, but takes a motherly approach to the roster of other Eternals, one that she crafted with director Chloe Zhao.

The Hollywood star said, “Chloé decided to tackle the concept of leadership from the perspective of motherhood… I’m not a mother. I’m an alien. I can’t have kids. However, my character used to be a man in the comics, now it’s a woman. So instead of just changing the gender, I proposed to [Zhao] to really bring something that is very specific to womanhood.”

“I need to guide them into things… we have a mission in life, in the world. A mother also needs to guide her kids,” Hayek continued. “When they misbehave, she will reprimand them, but always from the perspective of motherhood… There’s an empathy to it – although I’m not allowed to have empathy, because I’m an alien. So that makes it interesting…”

Marvel’s ‘Eternals’ to release in India before the US

In Eternals, after the return of half the population in Avengers: Endgame ignites “the emergence”, the Eternals — an immortal alien race created by the Celestials who have secretly lived on Earth for over 7,000 years — reunite to protect humanity from their evil counterparts, the Deviants.

Marvel’s ‘Eternals’ is set to be released on November 5 only in theaters.

Pankaj Tripathi on his cop act in Bunty Aur Babli 2: A role like this gives me creative freedom to entertain

Sleeping Less Than 7 Hours May Affect Your Brain and Immunity, Say Scientists

© Provided by News18 Sleeping Less Than 7 Hours May Affect Your Brain and Immunity, Say Scientists We may go above and beyond to maintain our health by following strict ... Read more »

What is SBI's OTP-based withdrawal feature? Find out who can avail this service

© Provided by DNA The State Bank of India is one of the most trusted banks of the country and often comes up with new features to make its services ... Read more »

© Provided by CNBCTV18 The government on Monday signed a share purchase agreement with Tata Sons for the strategic disinvestment of the national carrier Air India. Earlier this month, as ... Read more »

© BCCI What the two new franchises will be primarily after, along with all the others: the IPL trophy © BCCI In what will be seen as a watershed moment ... Read more »

© Provided by Pinkvilla Meet is a popular show on television screens that has been getting the attention of the audience with its refreshing storyline. The show presents the story ... Read more »

The MRI Results Are Reportedly In For Zach Wilson

© Provided by The Spun Jets rookie quarterback Zach Wilson on the field. Zach Wilson suffered an injury in Sunday’s blowout loss to the New England Patriots and it sounds ... Read more »

© 8 8 The Raiders made two big free-agent signings this offseason. One was bringing in Casey Hayward Jr., who just so happens to be Pro Football Focus’ highest-rated cornerback ... Read more »

© Provided by CBS Sports TAMPA, FLORIDA – OCTOBER 04: Justin Herbert #10 of the Los Angeles Chargers looks to pass during the third quarter of a game against the ... Read more »

© Provided by The Spun An extreme closeup of ESPN college football analyst Paul Finebaum from the Cotton Bowl in Texas in 2019. Speculation continues to swirl about the LSU ... Read more »

© Provided by LSU Tigers Wire This could be the biggest hire upcoming for LSU athletic director Scott Woodward. Not that this hire is any bigger for a program, but ... Read more »

© Provided by The Spun Chiefs quarterback Patrick Mahomes on the sideline. Things have not been going very well for Patrick Mahomes and the Kansas City Chiefs so far this ... Read more »

Panthers QB Sam Darnold on benching: 'It is what it is'

© Provided by Panthers Wire Carolina Panthers quarterback Sam Darnold has tried to prove that he isn’t the same guy we saw with the New York Jets. But, ironically enough, ... Read more »

© Provided by Fansided SEC football power rankings entering Week 9 when Florida and Georgia clash in Jacksonville and Ole Miss and Auburn meet in an SEC West battle. With ... Read more »

“What are you doing?” Fan tries to climb into Baltimore Ravens' broadcast booth in search of a drink

© Provided by Awful Announcing A fan at Sunday’s Baltimore Ravens game really wanted a drink. Late in the first quarter of the Ravens’ Week 7 game versus the Cincinnati ... Read more »

© 4 4 The Oklahoma Sooners matchup with the Kansas Jayhawks was just one example of the wild weekend of football in the Big 12. Oklahoma State lost their first ... Read more »

Actor Alec Baldwin accidentally fired a fatal shot from a pistol that contained a real bullet rather than just blanks. Photo: ANP The fatal incident on the set of the ... Read more »

© Provided by WION Pakistan thrashed India by ten wickets in their opening clash of the T20 World Cup 2021 on Sunday (October 24) to get off to a winning ... Read more »

Ed Sheeran Tests Positive for COVID-19 — Will He Still Perform on ‘SNL'?

© Provided by US Weekly Ed Sheeran Tests Positive COVID 19 Will He Still Perform SNL Ed Sheeran announced that he had tested positive for COVID-19 on Sunday, October 24 ... Read more »

© Provided by DNA India pacer Mohammed Shami is being subjected to online abuse after the Men in Blue suffered a defeat against arch-rival Pakistan in the ICC Men’s T20 ... Read more »

Afghanistan vs Scotland Live streaming ICC T20 World Cup 2021: When and where to watch AFG vs SCO in India

© Provided by Zee News Afghanistan are used to coming into World Cup matches as the underdogs. But having qualified directly for the ‘Super 12’ by virtue of their ranking, ... Read more »

Bon Iver To Perform At Forest Hills Stadium Next Summer

Luke Bryan is paying his respects to the King. The country singer, 45, showed off his Elvis Presley impression to his fellow “American Idol” judge, Katy Perry, as she guest-hosted ... Read more »

See Snoop Dogg's emotional tribute to his mother Beverly Tate, after her death

Snoop Dogg is mourning the loss of his mother, Beverly Tate, who passed away at the age of 70. © Provided by Audacy Snoop Dogg Snoop has taken to Instagram ... Read more »

© Provided by Quartz Dilwale Dulhaniya Le Jayenge still The first broadway musical was a “happy accident” in 1866. The first Bollywood movie released in 1913. A century later, the ... Read more »

Lauren Alaina has transformed from a teen tomboy to a wide-eyed woman Sitting Pretty On Top Of The World with her new album, available now. © Provided by Audacy Lauren ... Read more »

A Look Inside: Blugold Marching Band

© Provided by The Times of India LUCKNOW: With the crucial Uttar Pradesh assembly elections just a few months away, Union home minister Amit Shah will arrive in the city ... Read more »

Two Hizbul terrorists get 12-year sentence, two others get 10 years

Mohammed Shami It is no surprise that celebrated cricketers like MS Dhoni and Rahul Dravid stay away from social media and even urge budding ones to do so. Social media ... Read more »

© Provided by The Times of India NEW DELHI: India will have better access to public finance data of Maldives with a memorandum of understanding signed by Comptroller and Auditor ... Read more »

Bruce Springsteen thought Barack Obama 'had the wrong number' when he called about joint podcast, book

Katrina Kaif bowls Ranveer Singh over with his Simmba dialogue; leaves Rohit Shetty speechless as she promotes Sooryavanshi on The Big Picture - Watch

Paul McCartney on why he'd rather chat than sign autographs

‘Friends' Stars Mourn James Michael Tyler's Death: ‘Thank You for Being There for Us All'

Pop star Dua Lipa enjoys himself in the Netherlands: ‘Feels like home'

Ed Sheeran tested positive for COVID-19, but what does it mean for his new album release?