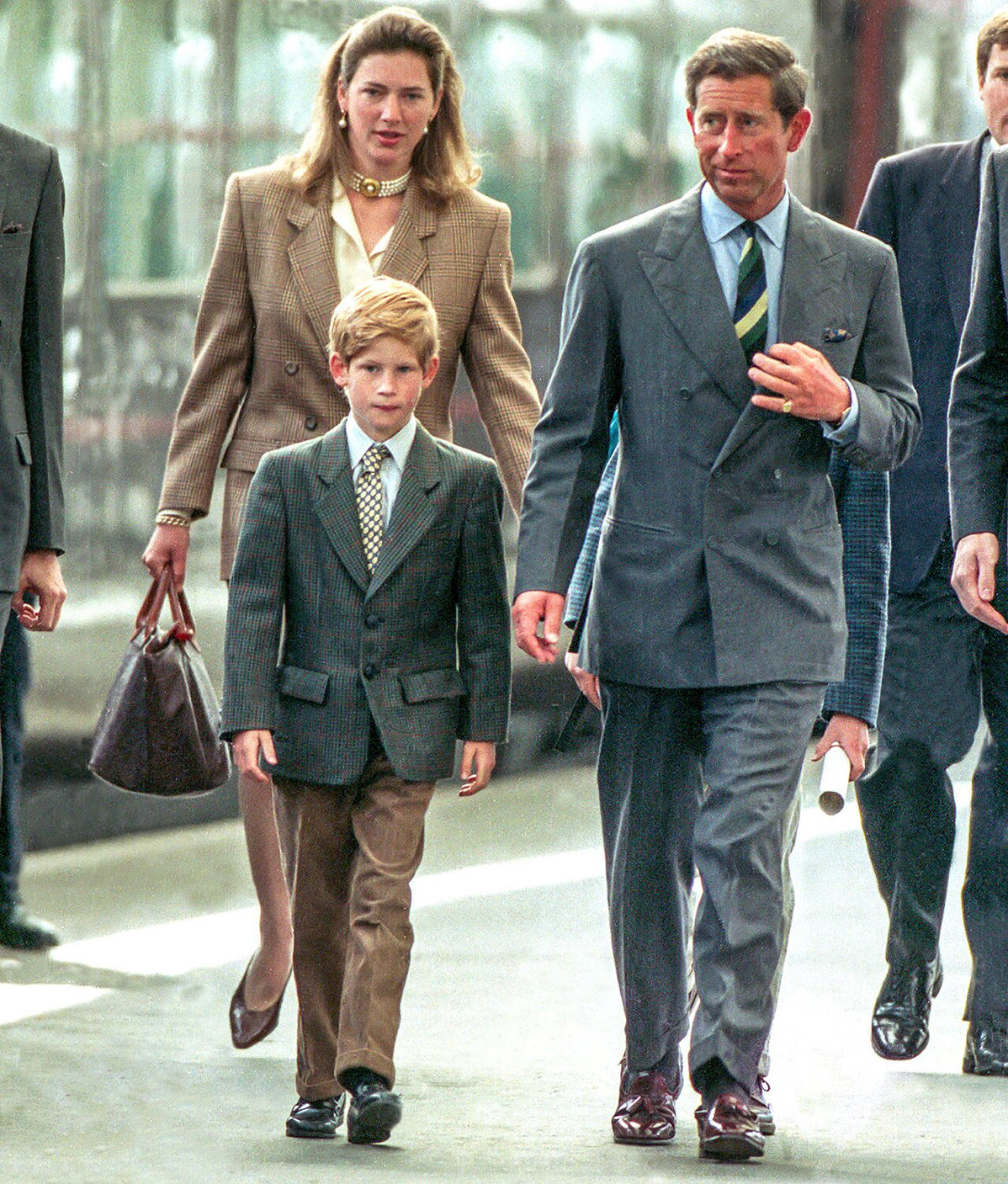 While Martin Bashir won’t be prosecuted by police over his deceitful methods to secure a 1995 BBC interview with Princess Diana, the network will pay a former royal nanny over the journalist’s false claims involving her.

Tiggy Legge-Bourke, who was employed as a nanny to Prince William and Prince Harry, was offered “significant” damages by the BBC, according to The Telegraph. The total amount, the outlet reported, is said to be “in excess of £100,000” or over $137,400. In an effort to land his interview with Princess Diana, Bashir allegedly convinced the late royal that Tiggy had become pregnant by Prince Charles and produced a faked abortion “receipt” as proof.

RELATED: The Biggest Bombshells From Princess Diana’s Panorama Interview in 1995

A source told The Telegraph, “Tiggy Legge-Bourke was right at the centre of Bashir’s manipulation and it is right that the damage caused to her is recognised by the BBC.” The outlet also reported that the settlement is expected to happen quickly.

Tiggy — who previously left her job as a nanny back in 1999 after she got married, and now resides in Wales — did not respond when asked for comment by The Telegraph. The news comes just days after Metropolitan Police announced Bashir had “not identified evidence of activity that constituted a criminal offense,” according to the BBC.

Can’t get enough of PEOPLE‘s Royals coverage? Sign up for our free Royals newsletter to get the latest updates on Kate Middleton, Meghan Markle and more!

Following his investigation, Lord Dyson said he was “satisfied” that Bashir commissioned fake bank statements and showed them to Diana’s brother Charles Spencer. He did this to “deceive and induce” Spencer to gain his trust and arrange a meeting with the Princess,” he continued. “In doing so, he was able to convince Diana to do the notorious interview.”

Bashir quit his post at the BBC ahead of the network’s release of the inquiry report.

Back in May, Bashir gave his first interview since the results of the inquiry were released, where he said he was “deeply sorry.”

“I never wanted to harm Diana in any way and I don’t believe we did,” the journalist said in an interview with The Sunday Times. “Everything we did in terms of the interview was as she wanted, from when she wanted to alert the palace, to when it was broadcast, to its contents.”

“I can’t imagine what their family must feel each day,” he continued in reference to Diana’s sons.

In his interview with The Sunday Times, Bashir also spoke out against a statement William made after the report was released, in which the royal criticized the BBC.

In his statement, the Duke of Cambridge — who did not mention Bashir by name — said that “the BBC‘s failures contributed significantly to her fear, paranoia, and isolation that I remember from those final years with her.”

Bashir has denied this. “Even in the early 1990s, there were stories and secretly recorded phone calls. I wasn’t the source of any of that,” he told the newspaper. “I don’t feel I can be held responsible for many of the other things that were going on in her life, and the complex issues surrounding those decisions.”

While speaking with The Sunday Times, Bashir also specifically said that showing Spencer the forged bank documents “was wrong” and something he “deeply regrets” — although he claimed that “had no bearing” on his 1995 sit-down with Diana. Tiggy (whose last name is now Pettifer) was hired by Prince Charles as a nanny for William and Harry in 1993, shortly after Charles and Diana separated. She joined the Princes on vacations and maintained a close relationship with them, and both attended her wedding in 1999.

Tiggy was a guest at Prince Harry and Meghan Markle‘s 2018 wedding — and was named a godmother for their first child, Archie, after he was born in May 2019 (daughter Lilibet Diana was born this past June 4).

Recap & Highlights: Athenea Picks Up Assist In 6-0 Win Over Ukraine

Bad Bunny, Karol G & More: Which Latin Artist Would You Trick-or-Treat With on Halloween? Vote!

Indianapolis musician-turned-home organizer gets picked to work on 'Hoarders'

The Strokes to play Barclays Center on New Year's Eve: Where to get tickets, opening acts, band news

Pro Tip: Females, if you’re tryna “Rendezvous” with Jack Harlow, be prepared to sign an NDA first. That’s right, fresh off his No. 1 single with Lil Nas X, the ... Read more »

Kid Cudi His debut mixtape A Kid Named Cudi broke him into the hip-hop scene in 2008, and 13 years later, Kid Cudi stands as A Man Named Scott in ... Read more »

The Go-Go's celebrate 'girl power' ahead of Rock Hall induction: 'We didn't compromise'

Of the myriad artists who warrant the response, “They’re not in the Rock and Roll Hall of Fame?,” The Go-Go’s have been one of the most brow-furrowing omissions. But that ... Read more »

He's running for DA, challenging the NYPD and the status quo

The American rapper, who has been struggling with addictions for years, is said to have ordered the drug oxycodone from a dealer. He bought the pills from Walter, but was ... Read more »

© Photo: Don Calva It’s impossible to talk about Tejano music—or, indeed, about female pop stardom—without recognizing the influence of Selena Quintanilla, one of the most famous Mexican-American entertainers of ... Read more »

NBA YoungBoy Is Getting Out of Jail

© Getty Images YoungBoy Never Broke Again is expected to walk out of a Louisiana jail Tuesday afternoon on his way to house arrest in Utah. Federal prosecutors on his ... Read more »

The man accused of supplying the drugs that killed rapper Mac Miller in 2018 admitted in a plea deal that he sold drugs laced with fentanyl, court documents show. © ... Read more »

It might be difficult to explain to young people who this summer witnessed the universal praise received by The Linda Lindas—the adolescent punk band that went from playing a public ... Read more »

© Photo: Kathy Hutchins / Shutterstock.com All Time Low band TikTok user (@mini.grew) posted a video describing an experience she had with an unnamed pop-punk band where they invited her ... Read more »

Brandi Carlile Brandi Carlile’s single “Right on Time,” from her recent Billboard Top Americana/Folk Albums and Top Rock Albums No. 1 album In These Silent Days, has been moved from the ... Read more »

© Warner Bros. Pictures HBO Max has quickly become a favorite streaming service among many, with its library of HBO programming, all-new Max originals, and movies that pull from the ... Read more »

© Photo by Darren Walsh/Chelsea FC via Getty Images A great break from Chelsea turns into a corner play in the near end of the first half. Hakim Ziyech steps ... Read more »

© Photo by Aitor Alcalde/Getty Images I hate repeating this over and over again, but at some point here we need wins. Cadiz is far less talented than we are, ... Read more »

© Provided by Daily Mail MailOnline logo Ryan Reynolds and Rob McElhenney got a first taste of life as a football owner as they jetted in to the UK and ... Read more »

Owen Paterson was investigated by the Parliamentary Committee on Standards for lobbying on behalf of two companies – Eddie Mulholland for The Telegraph Senior Tory MPs have threatened to defy ... Read more »

Talking Trikots: A look into my own kit collection

If you’re a football fan, chances are you’ll have at least one jersey from your team in your closet. I’m not saying that you’re not a real fan if you ... Read more »

© Provided by Dot Esports One of Overwatch’s most iconic characters is embarking on a new adventure with a new moniker and, most importantly, a clean slate.  The game’s Oct. ... Read more »

US casinos look to improve gender equity in management

© Provided by Associated Press FILE – This Sept. 21, 2020, file photo shows the four women who at the time ran Atlantic City casinos posing for a photo on ... Read more »

When is the LoL Worlds 2021 Semifinals?

The 2021 League of Legends World Championship is roaring on as the semifinals come around the corner. The quarterfinals featured an exciting set of games beginning Friday, Oct. 22 and ... Read more »

© Inglewood Park Cemetery Los Angeles may be youthful in comparison to metropolises like New York, Philadelphia, or Boston, but its designation as Tinsel Town means that there’s nowhere better ... Read more »

© Provided by People Amy Sussman/Getty Images Adam Levine was not prepared for his latest run-in with a fan. In a viral TikTok video, the 42-year-old singer was far from ... Read more »

NASHVILLE, Tenn. (WZTV) — Country star Luke Bryan came to the aid of a Middle Tennessee mom stranded with a flat tire on a curve in a small town. You ... Read more »

Guilty pleasures be damned: Experimental pop duo 100 gecs makes genre-mashing bangers that reject all notions of musical snobbery in favor of the good time that lies beyond, and they’ve ... Read more »

Mariachi Vargas Extravaganza is back! It’s pegged as the largest and longest-running mariachi music event in Texas and perhaps in the U.S. The annual festival kicks off on December 2 ... Read more »

Back in 2011, Miranda Cosgrove was touring the country for her debut album when her tour bus crashed in the middle of the night, leaving her with a severe ankle ... Read more »

Donnie will give a concert on April 30 at AFAS Live in Amsterdam. The rapper will be accompanied on stage by guest artists such as René Froger and Frans Duijts, ... Read more »

Prince Albert: ‘Charlène back in Monaco before November 19'

Charlène has been in South Africa since May and was unable to go home because she had to undergo multiple surgeries due to a throat, nose and ear infection, which ... Read more »

Are Princess Mako and her new husband Japan's answer to Harry and Meghan?

Mr and Mrs Komuro, as they are now known, have trodden a parallel path to the Sussexes, although they deny the comparisons It’s perhaps the ultimate post-modern fairytale. A Japanese ... Read more »

Taylor Swift Once an active user on Tumblr, Taylor Swift called back to her 2013 Red era with a cute video that visually re-enacts one of her old text posts about ... Read more »

Wife Alec Baldwin: ‘Impossible to put into words the shock of this incident'

Springsteen Recalls Being 29 In Holmdel, Writing 'The River'